When Karla Pearlstein, the Oregon-based restoration consultant who has helped so many clients with their vintage homes, got married to Aaron, the couple wanted their primary residence to be in Astoria, a port city northwest of Portland. Aaron wanted something large, near water, with a fireplace in the bedroom and a large yard. Karla set her sights on a smaller, more contained home. After looking extensively, they came across the Cherry House in nearby Warrenton, so-named because it had been the summer home of a prominent Astoria family named Cherry.

The then-owner had dubbed the house the Lady in Blue, though there was nothing lyrical about the cheap, blue vinyl siding and blue pseudo-stucco that covered it. Vinyl flooring in the remodeled kitchen looked like the spots on a brown-and-white cow. The original tile countertop sagged where it had been hacked into when a dishwasher was added. A large refrigerator blocked the window in the breakfast nook. In the living room, a vinyl window and two sets of 1980s vinyl French doors were leaking. Cigarette smoke stained the walls and dogs had spoiled the oak flooring. Still, the house had had only one owner since the Cherry family sold it in the 1950s. 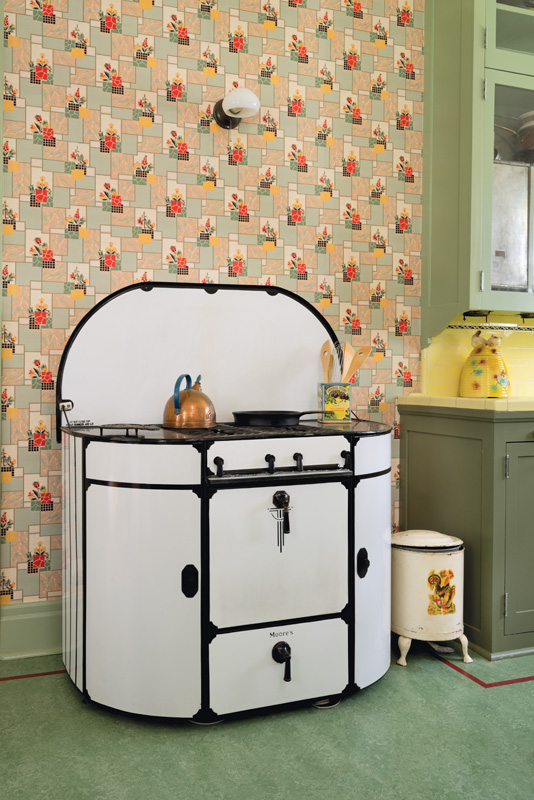 But “when I walked in and saw the Batchelder tile fireplace,” Karla recalls, “plus everything else Aaron wanted, I told him: Other people are coming to look, you have 10 minutes to make a decision before they get here!”

They bought the house and searched around for a contractor. “I didn’t know anybody in the area,” Karla says, “and we wound up hiring someone who did horrible things to the house.”

The contractor hired ex-convicts as a good deed, but they were unskilled at best. Countless mistakes were made that caused serious damage: upside-down flashing with building paper on the wrong side, modern stucco that failed—all leading to leaks and wood rot. The same men stole items that had been inherited with the home, including a blue Victorian sofa, the dining-room furniture, artwork, and the Pearlsteins’ own bed. The huge pier mirror had been built into the parlor wall, or they probably would have taken it, too.

Karla was furious but determined. She contacted a private investigator to find the stolen antiques. They got tips on the doorsteps of numerous derelict houses, finally tracking down the fence. Karla made a deal to reclaim the stolen items. “The message I sent was, Don’t mess with this historic house! I’ll hunt you down like dogs!”

Karla heard about Edward Overbay of Overbay Houseworks in Astoria, who is an artisan woodworker and designer with a team of craftspeople and a construction crew. Karla first asked him to refurbish the kitchen cabinetry. “Ed ended up falling in love with this house. He became my partner in its stewardship,” Karla says. “I could not have done this restoration without him.”

“The house was framed in 1932 with 2×4 balloon framing from the bottom floor through to the rafters,” Ed explains. “When we started dealing with all the rot issues, we couldn’t tear out the 2x4s, so we gingerly cut off the rotted areas and then sistered the remaining framing material with new material, so as not to disturb the pristine interior lath and plaster.”

As Karla and Ed undid everything that had been done over the years, they talked about pushing the house from a standard prewar Tudor to a crossover Storybook Style house. They stripped off the artificial stucco, and had Wayne Thompson Plaster Restoration from Portland restore it the old-fashioned way. Thompson suggested faux-painting the stucco and chimney with an aged patina and dark streaking effects. Ed suggested they paint the shingled portion in a period-inspired green.

Winds sweep off the lake and up the hill at 80 to 120 miles per hour, so those French doors leaked. Karla decided to replace one set with a second large window, adding subtle stained glass with storybook motifs to the transoms. Custom French doors to the yard also are fitted with decorative stained glass.

After 19 years, the house isn’t quite done. The next step will be a project with designer Matthew Roman, who’ll help Karla integrate period-inspired tile into the three bathrooms. Then they’ll re-envision the 1980s outbuilding as a caretaker’s cottage, suitably in keeping with the whimsical house.

Tile Inspirations
When a leaking upstairs toilet went undiscovered, water came through lath and plaster downstairs, destroying the original oak flooring at the entry door. The damaged wood was replaced with a tile “rug,” which also plays off the original Batchelder fireplace that can be seen from the entry.

Contractor Ed Overbay enlisted Renée O’Connor of Willapa Bay Tile to create custom molds for the border. Karla Pearstein, Overbay, and O’Connor collaborated on the design. In the center panel, two ravens face each other, picking up the motif of one of the Batchelder tiles in the living room. Those same tiles are found in Portland’s Pittock Mansion.

A Period Look, One Step at a Time
The kitchen was restored in stages. “First I took out the dishwasher and had countertops restored where they’d been damaged,” Karla says. “I replaced the awful, 1980s plywood upper-cabinet doors; [contractor] Ed Overbay built period-style doors fitted with restoration glass. We also chose period-correct hinges.”

An advocate of using wallpaper that matches the period of the house, Karla has been reproducing original papers with Lincoln Miller of Pushdot Studio. “I papered my entire kitchen,” she says, “as an example of how wallpaper creates a period room.”

She recently installed a very rare, 1930s-vintage Moore’s Vanity Stove, rebuilt by Dave Erickson in Massachusetts. It has a lid that closes over the gas burners, making it look like a piece of furniture. A 1935 Frigidaire completes the authentic look. 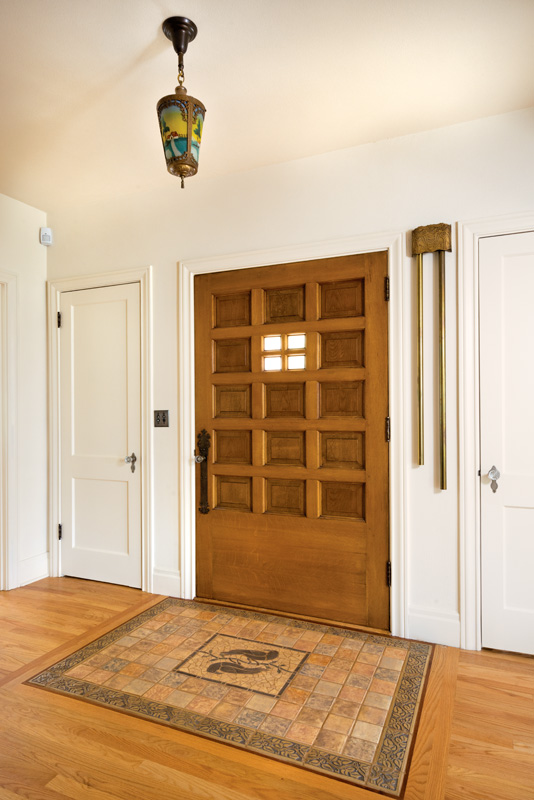 It’s All in the Details
Every decision made by the owners and contractor led to this: a house of the 1930s, evoking design influences from the period. The transition towards Storybook Tudor started when the artificial stucco was stripped from the exterior. It was replastered the old-fashioned way, and the stucco and chimney faux-painted in period fashion with streaks and patina. Shingled portions were painted green to contrast.

Living in a Bungalow

Something Old, Something New for a Vermont Farmhouse