Ornate wooden architectural details trimmed their gables, balconies, and front porches in fanciful colors. Most were constructed upon tiny lots that once held family tents—summer quarters for New England Methodists attending camp meetings at the Tabernacle in Trinity Park. In that festive spirit, vacationers deliberately designed their Oak Bluffs’ cottages to celebrate the interaction of family and community. 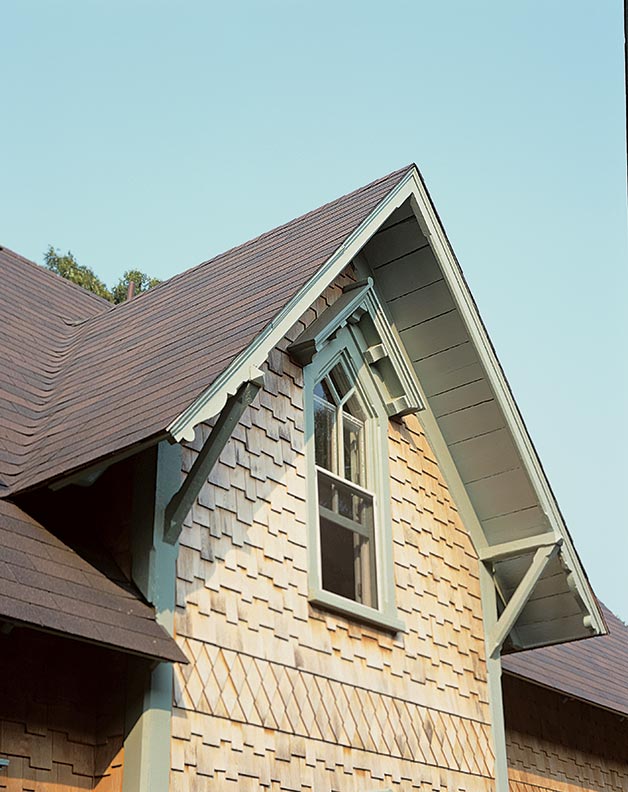 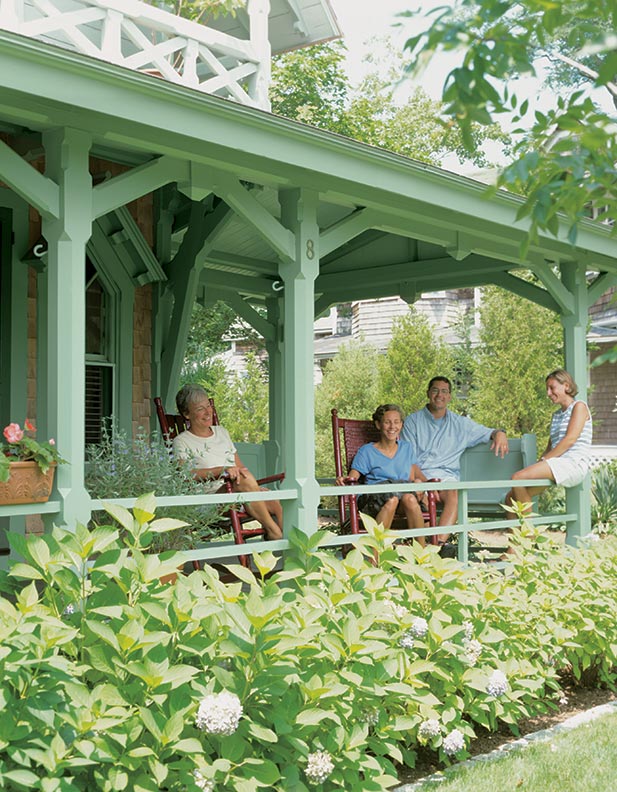 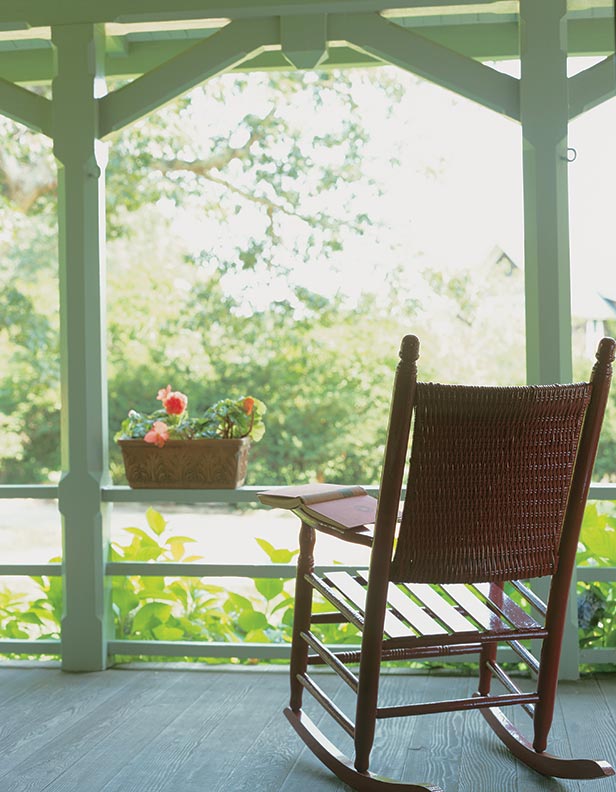 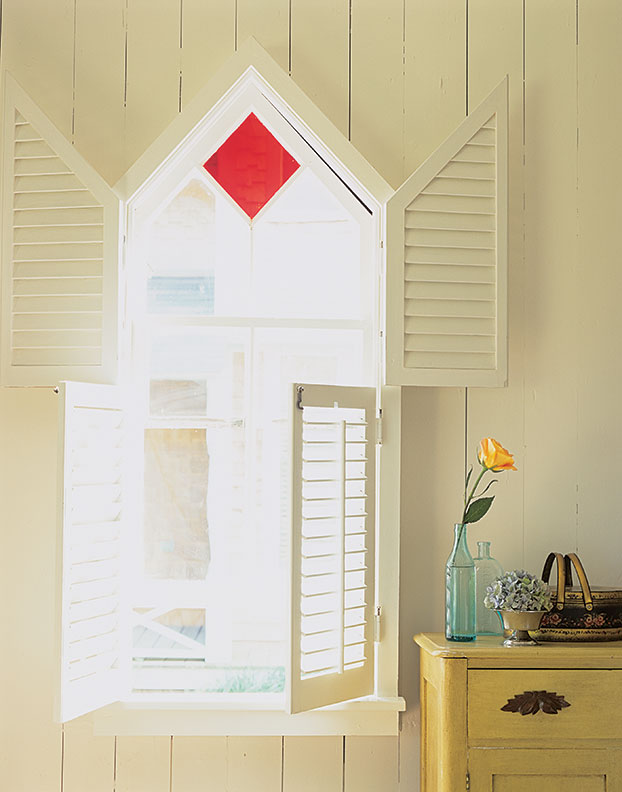 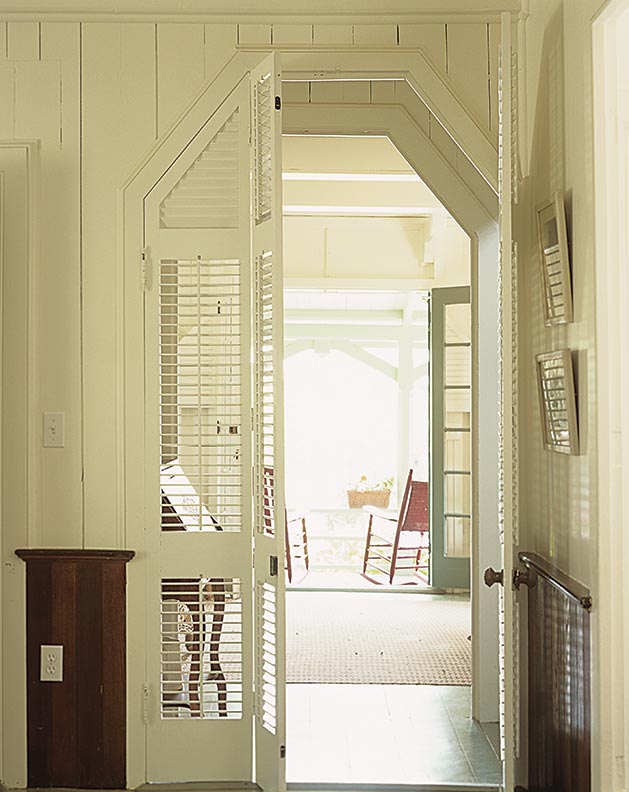 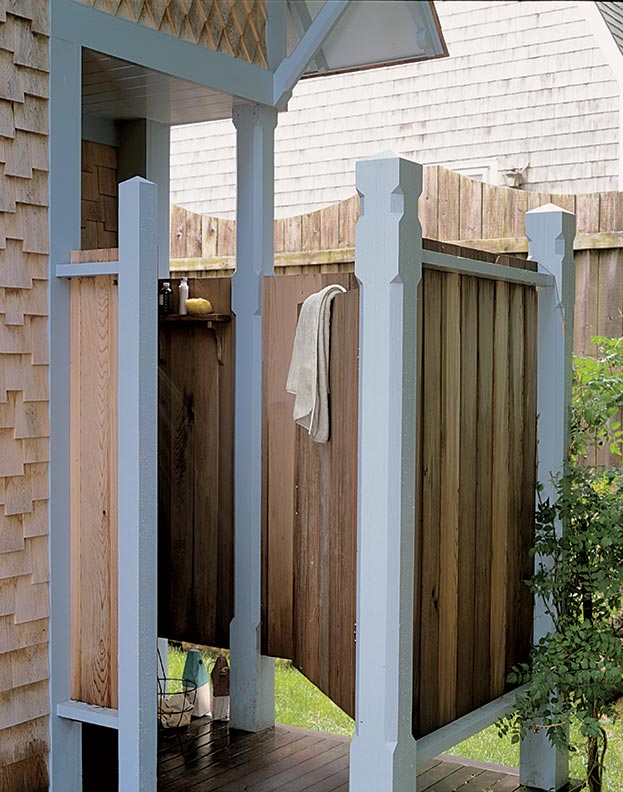 In a neighborhood beyond the Oak Bluffs camp meeting grounds, two larger Gothic Revival cottages sit perched side by side, reminiscent but more architecturally mature than their Gingerbread cousins. David and Sharon Robinson bought their 1869 cottage in 1965 as a summer home, complete with a mixture of furnishings that were original to the house, including a dining table seating 16 guests. They were the home’s third owners. When the property next door became available in the mid-1990s, the Robinsons purchased it for use by their three grown children, their families, and friends. That was when they first approached the firm of Mark Hutker Architects on Martha’s Vineyard for help in deciding how best to carefully renovate and unite both cottages.

“The goal was to relate both houses architecturally and functionally,” says project architect Charles Orr. Orr and Hutker proposed additions to the rear of each structure as well as a shared courtyard—or outdoor room—between the two buildings. The Robinsons were clear that they wanted all renovations to be true to the character of the original architectural designs. “They wanted the changes to be seamless and not draw any attention,” says Orr. “It was almost stealth architecture, so someone would come in and wonder if anybody had done anything there or not.”

The cottages, now referred to as Green and Blue, had their original kitchens removed, with their replacements offering an extra bedroom above. The additions also have full foundations to house mechanical equipment and provide some storage. Meanwhile, the wooden piers on which the existing homes were built were replaced by concrete piers. “All of the electrical and mechanical systems had to be updated,” says Orr. “Most importantly, we were set on bringing back what was original.”

The builders refinished, painted, or stained the original pine floors and preserved the original window sash and doors with their stained glass and hardware. “We kept the original tubs and sinks, only providing new plumbing fixtures to bring them up to code,” Orr adds. “There were strategic walls that were removed to make spaces larger.” Unnecessary closets were removed. Since most of the vertical pine boards on the walls had shrunk with age, any new replacement planking, if needed, was set with deliberate gaps to preserve its true cottage character.

The cottage exteriors were clad in new white cedar shingles arranged in both staggered and contrasting diamond patterns. “We researched the history of Shingle-style applications and took clues from the neighborhood and existing cottages,” says Orr. The diamond pattern also repeats the shape found in the original glass windows. For further emphasis, the architects echoed this pattern in the placement of blue slate tiles for the courtyard flooring.

From outside, the gabled ends project harmony but maintain individuality. “They are not trying to be identical twins, rather fraternal twins,” declares Orr. Together, there is a storybook quality to these predominantly Gothic Revival structures created by the dance of sunlight and shadow upon their steep roofs, dormers, gables, and ornamental woodwork.

The trusses in the gables are highly distinct—one has a mysterious “M” pattern and the other a dropped ball accent. Indicative of the Victorian Stick style, both houses share portions of picket-fence-pattern siding and diagonal criss-cross designs in the balcony railings. The front verandas maintain their original post, bracket, and railing designs. The only change made in rebuilding the porches was to move the steps from the front to the sides of the houses nearest the courtyard. Landscaping helps lead visitors toward the porch steps or to the courtyard at the heart of these two cottages.

Of the two houses, the Green cottage underwent the most renovation. Its existing kitchen was removed and replaced by a wider combination family room and kitchen consistent with the spare simplicity of the existing house. There is a mixture of beaded panels for the base cabinets and glass doors for the upper cabinets. Sharon Robinson was eager to retain the original apron-style porcelain kitchen sink. “We chose not to have a dishwasher because it’s kind of fun to be together and talk while we take turns washing,” she says.

French doors leading to the courtyard flank the fireplace in the family room/kitchen. The same doors in the new, more modest Blue cottage kitchen also lead to the “outdoor family room” as Sharon Robinson calls it. She says, “No one ever seems to eat inside.” The terrace space, backed by a low stone wall and native plantings that lend privacy, is oriented toward an outdoor brick fireplace that shares the chimney of the Green cottage. Whether furnishing the patio or indoor spaces, Robinson strives for simplicity. “The whole point is to keep it simple; therefore, we can immediately relax and have more time to enjoy it.”

In fact, a desire to use the Green cottage throughout various seasons prompted the Robinsons to begin a second phase of renovation in late 2004. While the new back addition had been winterized, architect Matt Cramer of Mark Hutker Architects oversaw the careful insulation process of the cottage’s old portions from the inside. His creative challenge was to install rigid foam insulation in a 2 1/2″ space while keeping the home’s interior character intact.

Each room with an exterior wall had unique issues. “They had either different bracket, ceiling, door, or window conditions to address, so there was no standard rule-of-thumb solution to follow,” says Cramer. Upstairs, the original exposed rafters were covered over in the insulation process, but the new ceiling boards follow the vertical lines seamlessly. Window and door details were re-created to resemble the originals, and outdoor storm panels were obtained to protect the old windows. The result is a camp-style cottage in which new conveniences artfully blend with the old.

Between the two dwellings, the Robinsons can sleep 16 people comfortably in summer. (The Blue house is not winterized.) As they sit on their gracious porches or in the courtyard, they are in keeping with the spirit in which these Oak Bluffs homes were originally designed—the mixing of family, friends, and neighbors. “We have a nice sense of community here,” says Sharon Robinson. “There is always some back and forth for cocktails.” Clearly the Robinsons know that every moment spent in these traditional cottages is worth celebrating.

Sally LaMotte Crane is a freelance writer and editor who lives along the coast of Maine.