The house is a nicely detailed American Foursquare, built in the Whittier neighborhood of Minneapolis in 1905. Its Colonial Revival elements include Palladian windows, modillions and dentil mouldings in the cornices, faceted columns with carved capitals, and raised-panel wainscots inside. A few interior elements lean toward English precedent.

“The problem was the layout,” say the clients, “and the lack of sunlight. The family room, which had been a servant dining room, had great southwest light, but it was very small and isolated from the kitchen.” The growing family struggled with the back entry—just a hallway, really, with tight access and no place to stow coats. The rear of the house, pocked with a closed-in but unheated porch, needed to be cleaned up.

So designer David Heide and his project architect, Chris Christofferson, were retained to add family space, rework the kitchen, and create a rear entryway with a powder room. “We wanted rooms to look original,” say the clients, something the designers accomplished by repeating existing elements and looking toward historical precedents. A space-dividing colonnade matches newel posts on stairs and columns on the front porch. Other repetitions are found in art glass, the diamond motif (on the original façade, now incorporated in the range hood), and the paneled wainscoting. Salvaged elements contribute to the seamless look: wainscots, the medicine cabinet and pantry sink, and many of the light fixtures came from remodeled areas of this house.

The new addition, along with the restored second floor at the rear, are clad in wood clapboards. The intention is to restore clapboard siding to the entire house, which was covered in cedar shingles at some time in the past.

Period conventions followed in the kitchen include plain, flat-edge white subway tile with grey grout and soapstone countertops. Traditional cabinets (based on those in the existing butler’s pantry) were designed with flush inset doors and exposed barrel hinges. New wood is red birch, finished with aniline dye and shellac. The clients’ wish list included a center island, accommodated by bumping out a window bay 10′ for the sink counter. “We elevated the windows,” Heide says, “to screen cars parked in the driveway and gain privacy from the neighboring house—and that gave us room for a historical backsplash.” The island has clipped corners, facilitating circulation while echoing the shape of the bay.

“The ceiling is better organized with a small soffit, just the depth of a ceiling moulding,” Heide explains. “It creates a nice, clean rectangle, instead of a plane that jogs around every cabinet.” He adds that the shallow soffit allows placement of recessed lamps where they’re needed, regardless of the ceiling framing. 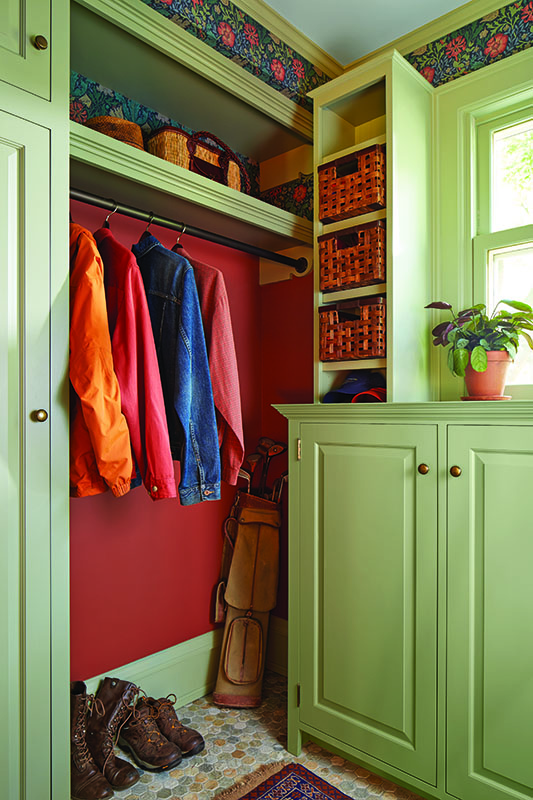 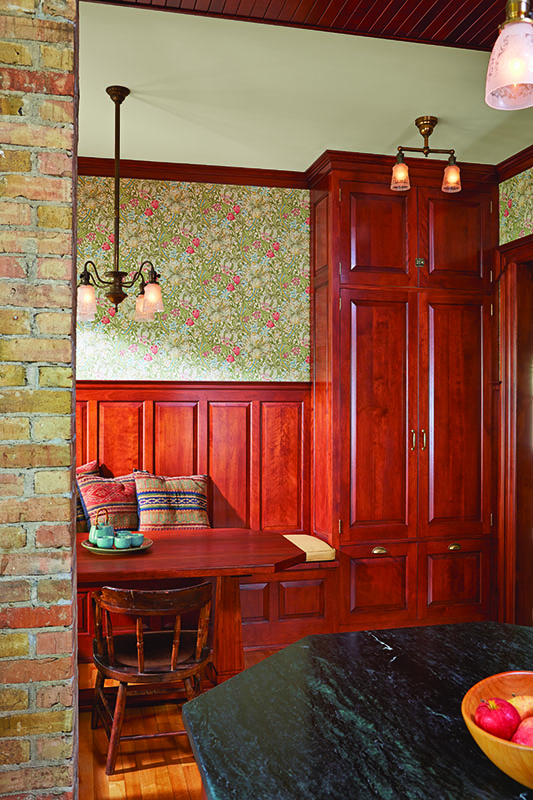 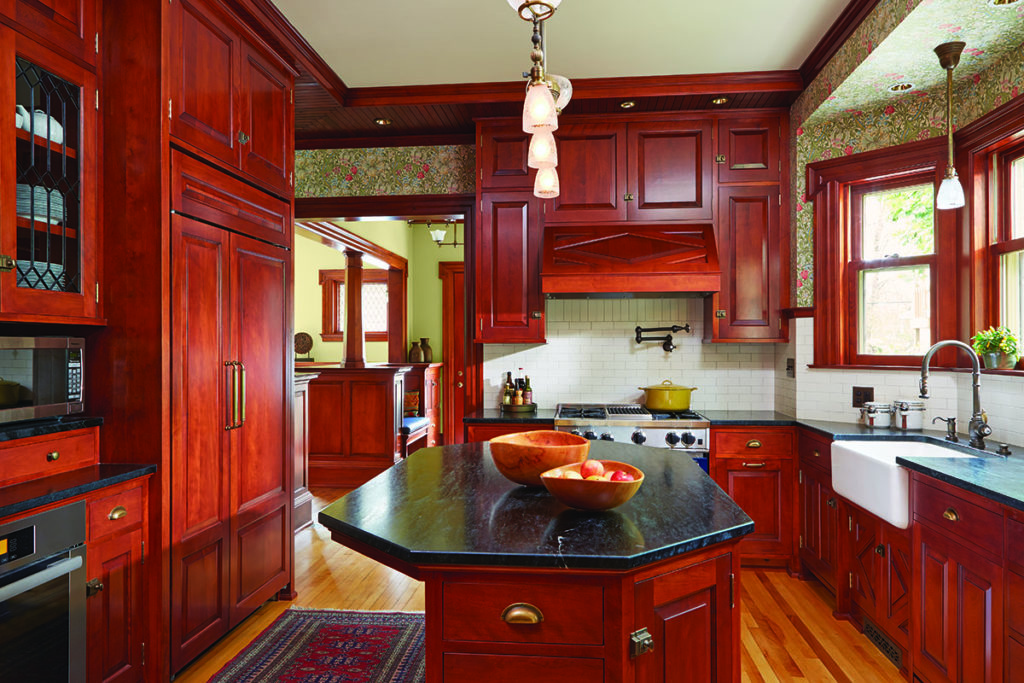 In the butler’s pantry, the green-painted cabinets that remain are in their original location. The space was in a prime corner, facing south and west: “a bad place to store pantry items in the sun!” says the owner. The butler’s sink was removed to the new powder room, and several cabinets relocated as built-ins in the newly finished basement.

“We didn’t want to entirely remove the pantry, but it blocked light and also access between kitchen and family room,” Heide adds. He kept the interior wall of cabinets and created an open wall opposite for sight lines between rooms.

“We embraced the particular shade of green that runs through the house,” Heide says; the owners weren’t interested in changing it, or stripping it from woodwork in other rooms. Now the color repeats in the big entry closet and the powder room. DHD Studio interior designer Michael Crull helped the clients assimilate their antiques and family pieces—the husband is from England—and choose finishes for rooms. “English Morris & Co. wallpapers work well with that green,” Crull says. [‘Weekend Getaway’ #473, Benjamin Moore]

Extending behind the original dining room, the family room is in a new addition at the rear of the house. “You have to think about the view between rooms,” Heide says. “Looking toward the kitchen, you don’t want to see blinking green microwave clocks and stainless-steel appliances, but rather cabinets, light fixtures, lovely wallpaper. You’ve got to tuck appliances around the corner when you plan an open kitchen in an old house.”

Nearby is the organized family entryway off the rear porch. Rather than a mudroom “that you walk through, dropping your junk along the way,” Heide jokes, “we created a back hall with just a built-in storage bench and a full-length mirror—and a separate, walk-in closet behind a door, with stacked shelving and a bank of drawers. Guests don’t have to climb through hockey sticks and violin cases on the way to the back deck.”

A powder room next to the closet, easily accessible from the back door, is screened from view of the kitchen. Wall-mounted faucets worked best with the reused materials and width of the room. The same soapstone used in the kitchen is the backsplash here, set into the wainscot (some salvaged, some new). The lavatory cabinet came out of the old kitchen. Combination gas/electric sconces are antique, from a local salvage dealer.

Although the family areas at the rear of the house have a more open plan—and lots of sunlight—the scale and hierarchy of rooms have been maintained. “I love the connections between rooms,” says the homeowner. “The family room connects to the dining room, and both make a seamless transition into the kitchen and more formal living room in the front of the house. Entertaining is so much better now.”

David Heide Design Studio is a full service architecture, interior design, and historical restoration firm in Minneapolis. The firm’s motto is “honor the past while anticipating the future.” Much of their philosophy is apparent in the renovation of this Foursquare:

• For any additions, scale is carefully considered to honor original massing and character.
• Existing elements inform new work; here, that included repeating original details and motifs in paneling, trim casings, baseboard, etc.
• Original and vintage materials find their way into renovation. Here, that included the old butler’s sink re-purposed in the new powder room, and the use of antique lighting.
• New work alludes to historical precedent; for example, the desire for well-lit, open
living spaces was mediated by the use of a colonnade.

“It always gives me pause when we elevate ‘back of house’ areas to ‘front of house’ standards of luxury or style,” David Heide says. “I talk myself through it by understanding that the ‘front of house’ people—the homeowners—are now the ones using the kitchen and rear entrance. That said, we nod to tradition by making minor changes, like the use of a different wood species for public vs. family rooms.”

For more on their design process, go to dhdstudio.com/process 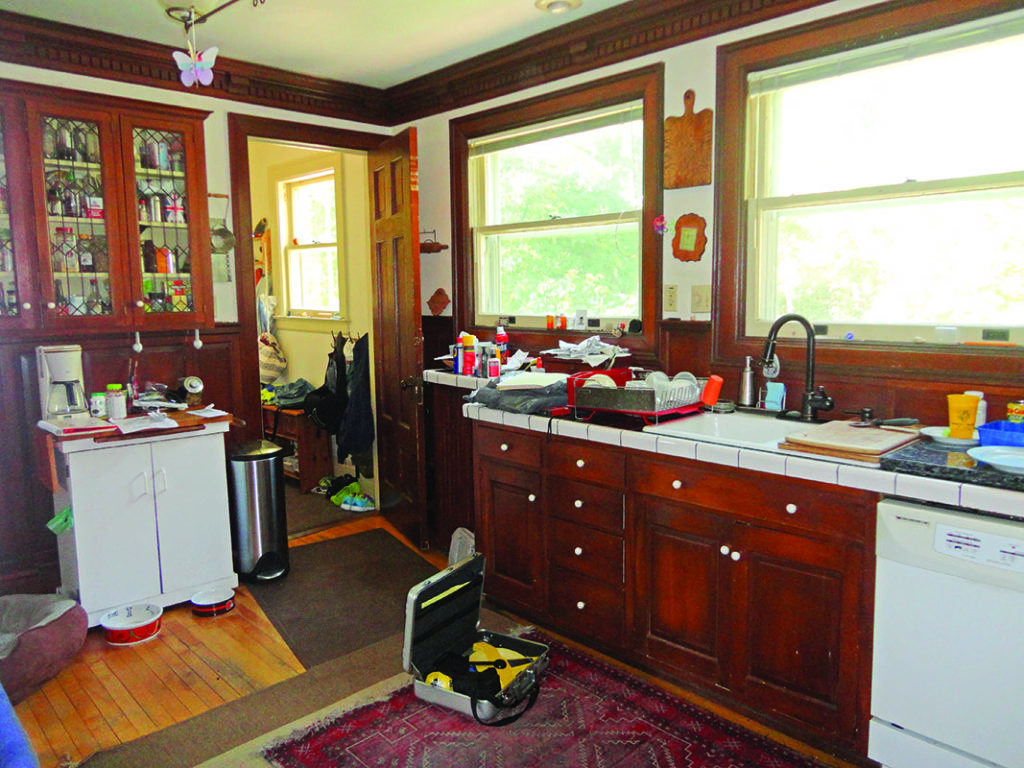 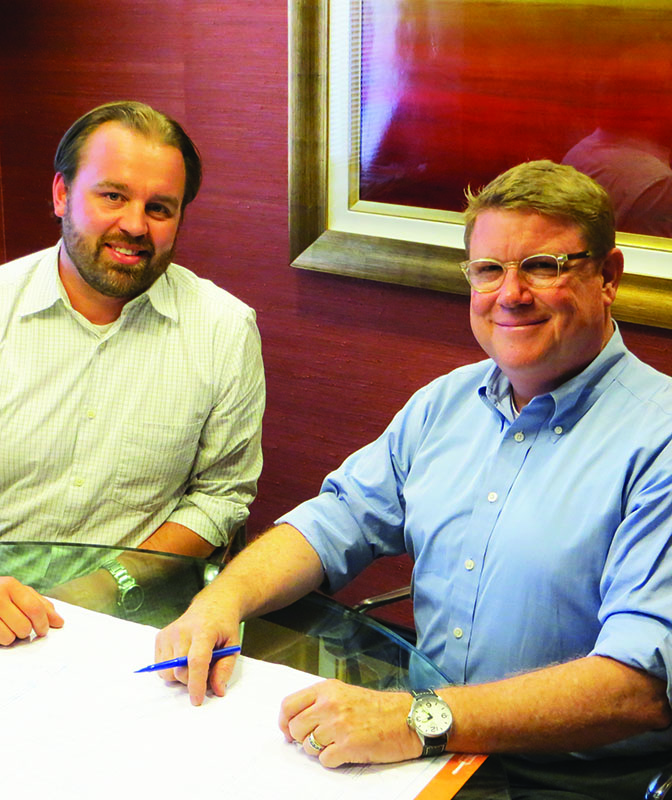 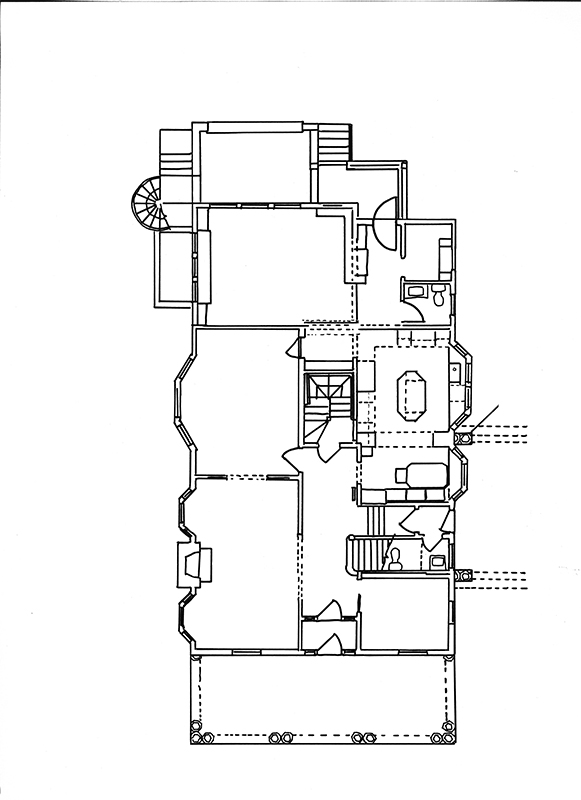 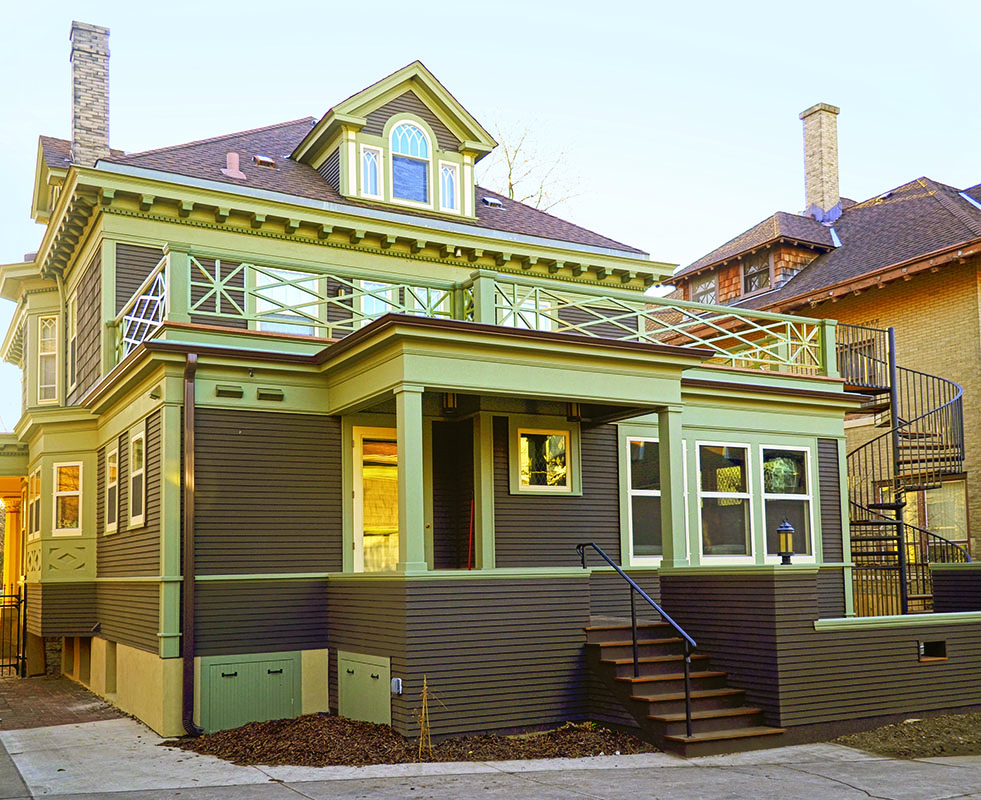