Michael Imber, an architect in San Antonio, Texas, developed a passion for the history of architecture while studying architecture at Texas Tech University in the 1980s. He furthered his education with several years of experience working for Shope Reno Wharton Architecture and Alan Greenberg, Architect, two East Coast firms that were among a handful charting a new course in the revival of American vernacular and neoclassical architecture. But Imber longed to return to Texas and similarly reinvigorate the rich architectural heritage of the American Southwest, with its eclectic mix of Spanish, Native American, and Anglo-European influences.

A serendipitous opportunity presented itself with his very first commission to design a new house. The client, Milton Butcher, a retired businessman and passionate art collector, had recently purchased a ranch about an hour’s drive southeast of San Antonio. He asked Michael Imber to design a small weekend ranch house that could also showcase paintings from his collection. The client did not specifically ask for a new old house, but armed with his knowledge of Texas architectural history, Imber chose as a model a local (and outside the region, little known) weekend-house prototype that had originated among nineteenth-century German immigrants. 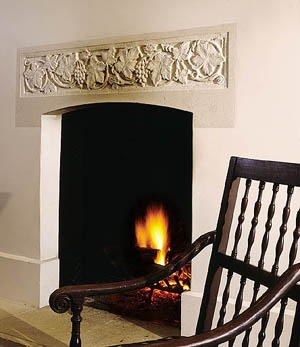 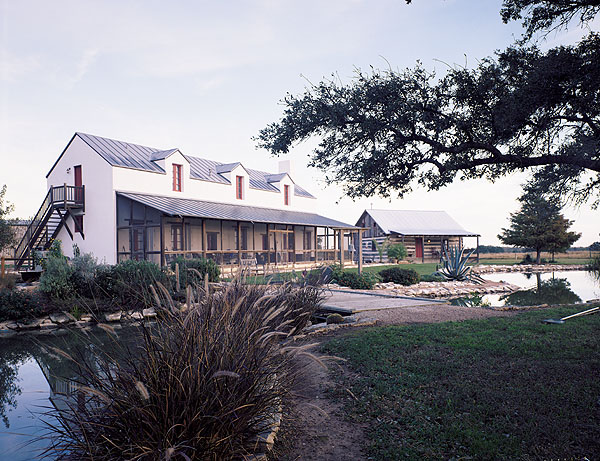 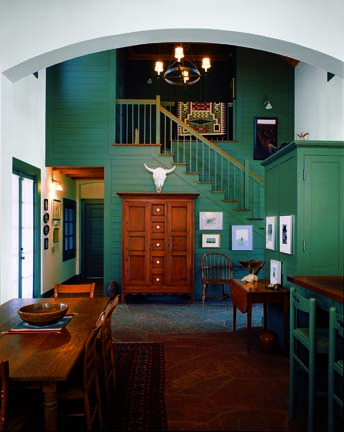 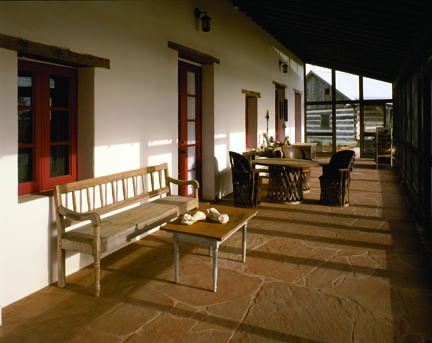 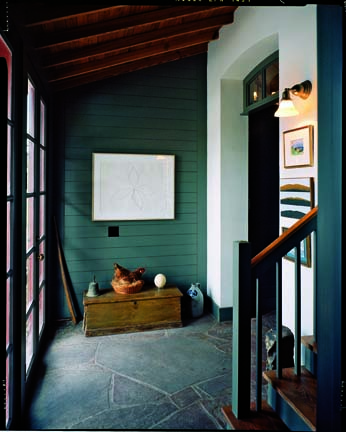 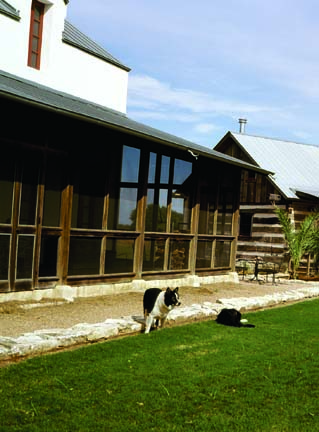 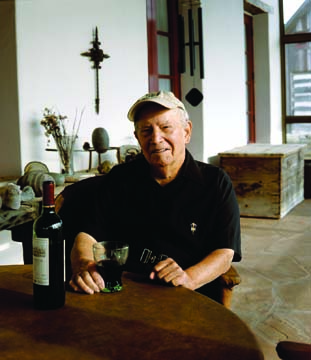 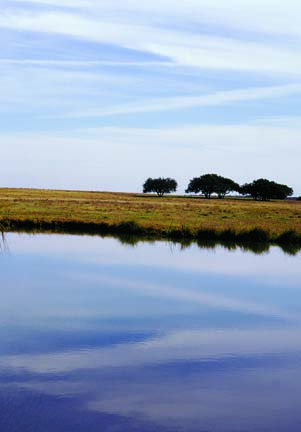 Political, social, and economic conditions in 1840s Germany had prompted a group of German noblemen to form the German Emigration Society, which sought to resettle large numbers of Germans in the new Republic of Texas. The original development plans for early German settlements such as Castroville, Fredericksburg, and New Braunfels were based on the European village model in which each family would have a small plot of land “in town” for a house, with a larger plot of land within walking distance for farming. But as the immigrant population grew, the distance between town and farm soon became too great to travel daily, so most immigrant farmers opted to live “English style,” building their homes on their farms. Traveling to town remained a necessity, however, for shopping, socializing, and attending church. The first two activities could not be done on Sundays, and completing the trip on consecutive Saturdays and Sundays was tiresome. So farmers used their town lots to build small, simple houses for the weekly overnight trips.

These “Sunday houses,” as they came to be called, were simple wood-framed houses with only one or two rooms. The single-room width allowed for cross breezes, an important design consideration in this warm climate. Some houses were one and a half stories tall, with an attic sleeping loft for children tucked beneath a simple gable roof. With only two small rooms on the first floor, an exterior stair to the loft was a common feature that made the most of the limited interior space. A fireplace, a front porch, and the bare necessities for housekeeping made these houses, which would have been immensely unsuitable as permanent homes, delightful places to spend a Saturday night. When the first generation of farmers passed their farms on to their sons, many enlarged and retired to their Sunday houses, but because most were designed for casual use, few have survived.

With the idea of the Sunday house firmly in mind, Imber proceeded to reinterpret the prototype to suit the needs of this client, this house, and this site. The basic plan proved to be ideally suited to the client’s needs. Like most Sunday houses, the Butcher residence is a single rectangular form beneath a simple gable roof.

The house is one room wide, with two large rooms on the first floor: a two-story kitchen/dining/living room with a massive fireplace and a single-story master bedroom. To create a sense of privacy for the master bedroom, the major first-floor rooms are separated by the central stair to the second-floor guest suite, beneath which is tucked a powder room and the master-suite bathroom. The few interior walls are detailed with plain horizontal boards, reminiscent of the 1″-thick board walls that would have separated the rooms of a Sunday house. A screened porch runs the entire length of the southeast side, oriented to capture the prevailing breezes on warm summer nights and the warming sun on cool winter days. Though it is large enough to accommodate an interior stair, Imber designed an exterior stair to the loft bedroom in a respectful nod to the vernacular prototype.

A few Sunday houses were originally built as single rooms, with a kitchen later tucked into a lean-to addition in the rear. Michael Imber saw an opportunity to reinterpret this idea to create along the long northwest (entry) side of the house what he calls, appropriately enough, “a saddlebag addition,” into which he tucked the kitchen, entry hall, laundry, and stair landing. With this gesture, the main rooms of the house maintain the simple purity of their antecedents while allowing the occupants all the conveniences of modern life.

While the historical origins of this new old house are apparent to those who know the architectural history of the region, there exists no other Sunday house quite like this one. Most obvious is that this is a ranch house, not a town house, a conceptual leap that never troubled Michael Imber, who had no intention of creating a replica. Also, with a footprint of about 1,300 square feet and a height of two full stories, the Butcher residence would dwarf the diminutive houses that inspired it. The client, for example, doesn’t see the historical connection. “In his book [Creating a New Old House], Versaci called this a Sunday house, but I don’t get that,” says Butcher. “Those houses were little bitty things.”

Butcher had a historical aesthetic vision of his own that extended far beyond the design of the house to the landscape, which became a primary consideration in its design. Prior to the arrival of the Spanish, these rolling plains east of Texas Hill Country were part of the endless expanse of American grassland prairie, dotted here and there with native trees. As the Spanish moved north from Mexico, they brought (or rather their horses and cattle brought, in their droppings) the seeds of mesquite, a small tree of gnarled trunks and thorny branches that thrived in the hot, dry climate and soon obliterated the open vistas of the Texas prairie. When he purchased the land, Butcher resolved to eradicate the mesquite and restore the pre-Spanish prairie. This was not to be just a new old house; it would be a new old house in a new old landscape. A few hard facts help us appreciate Butcher’s commitment to his vision. Eradicating mesquite is a laborious and expensive task that can only be accomplished by pulling out each tree and its roots during the wet season. Though his 700-acre ranch is small by Texas standards (a typical ranch is 10,000 acres or more), Butcher’s landscape restoration project ultimately cost him 75 percent of the original purchase price of the land.

The landscape restoration project proceeded simultaneously with the design of the house, which meant that Michael Imber had to imagine a setting for the house that did not yet exist. “The whole idea was for the scale [of the house] to read at a distance,” says Imber. A barn already existed on the property adjacent to a mature Live Oak tree, and a small grove of trees stood a short distance away to the southeast. Senderos (wide trails or paths) were cut through the brush to open the view of the barn site from the surrounding low hills.

After studying the site from multiple vantage points, Imber placed the house near the barn between the single Live Oak and the nearby grove to partially enclose outdoor space on both sides of the house, anchor it to the land, and provide foreground scale to the open landscape. The owner later excavated a pond on the porch side of the house and built a log house just to the north of it, further heightening the effect. Imber’s careful placement of the house ensures that whether you are inside or outside the house, you feel comfortably nestled on the prairie, not engulfed by it.

The scale of the house, and the much larger scale of the restored prairie, prompted Imber to incorporate another, more widely recognized regional motif into the design of the house. The exterior walls, though framed in wood, are 12 inches thick and finished in whitewashed stucco, much like the plaster-finished limestone houses—both urban and rural—that were common throughout nineteenth-century Texas and whose rural expression bore a strong resemblance to Spanish adobe. The clean, bright-white, unadorned surfaces, punctuated by deep window and door recesses, enable the house to “read at a distance” as the architect intended, while the massive stone fireplace, a nod to the massive kitchen fireplaces found in some Sunday houses, “is like a stake that anchors the house to the ground,” says Imber.

The Butcher Residence earned Michael Imber an AIA Honor Award, a rare tribute for an architect’s first house, rarer still for one of traditional design. “Traditional houses do not typically win awards, but [the jury] saw the Butcher house as a modern interpretation,” says Imber. “I never thought of it that way. I saw it as distilling the style to its essence.”