“We really love old houses,” insists the husband. “I just got tired of things not working.” So they packed up their three young children and moved a bit farther north to a house that was both bigger and newer. “Everything worked,” says the husband brightly. “But,” he continues with far less enthusiasm, “it had no personality.” 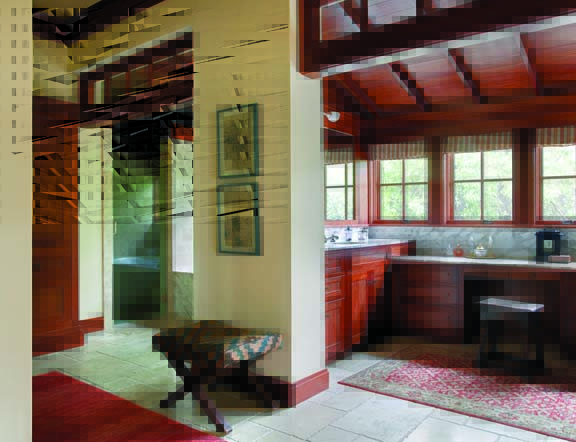 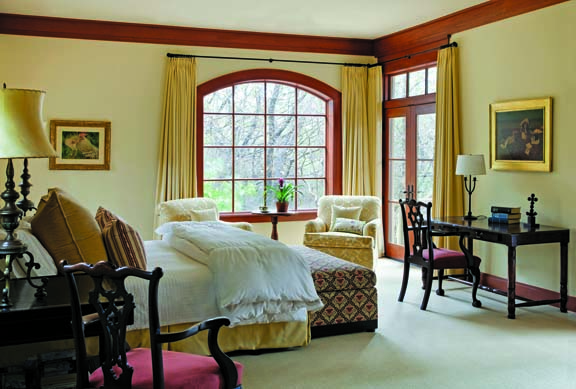 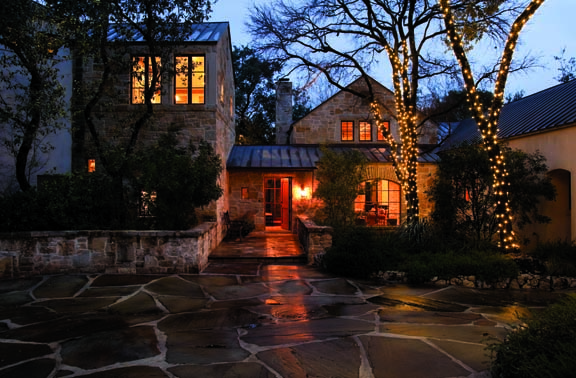 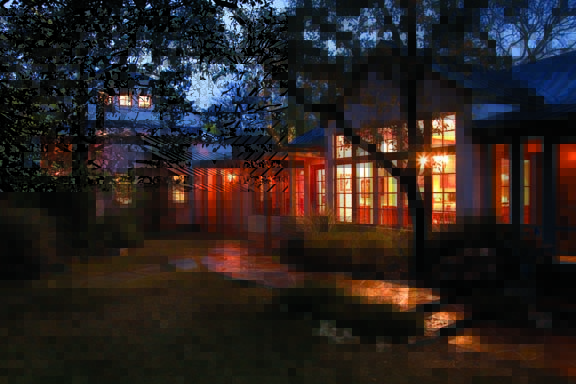 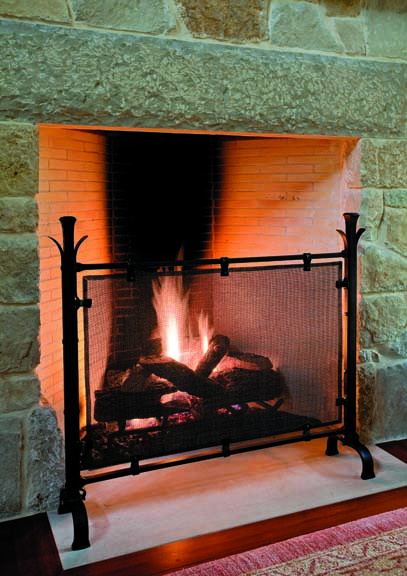 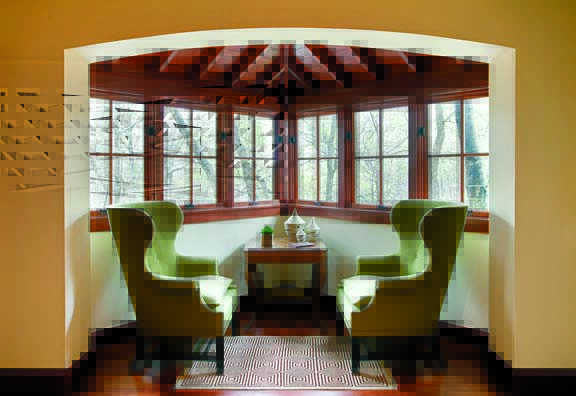 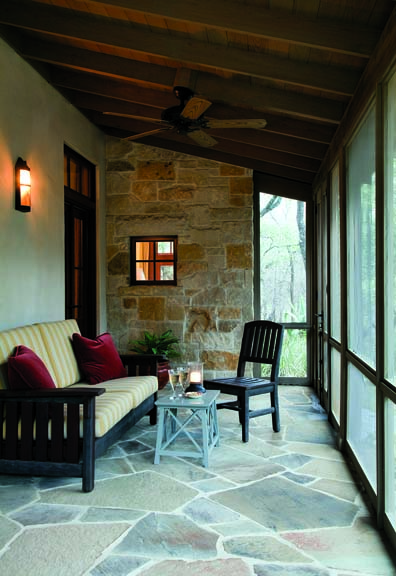 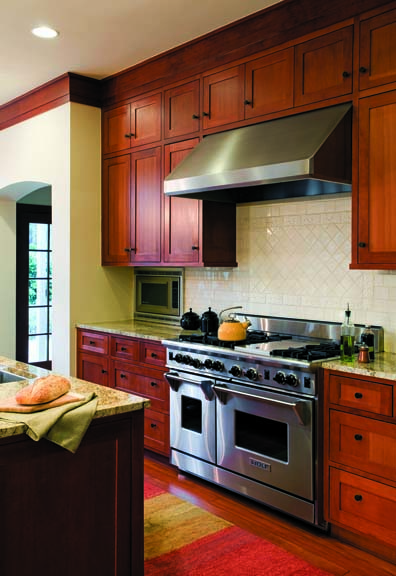 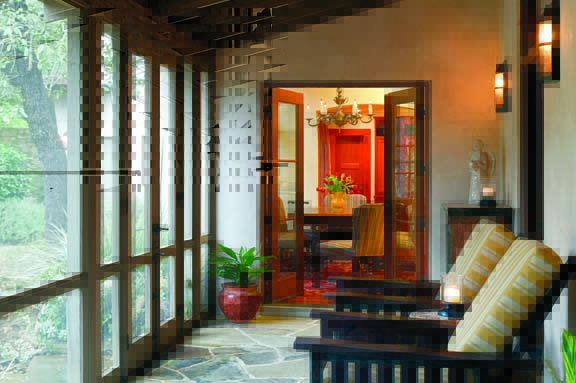 Taking heed of the lessons learned from these houses—one pretty but prone to falling apart, and the other the exact opposite—the couple knew the third time would be the charm. Starting from scratch with a house lot of four and a half acres in Hill Country Village, a small agrarian suburb 25 minutes from downtown San Antonio, they started to envision their dream house and, approaching it academically, drew up fairly detailed plans. They knew they wanted a big but not gigantic house, one that would feel cozy even after the children left for college. The husband wanted a house that was “fairly masculine, where you can hang deer antlers and they look good.” (He’s not a hunter, but his son is.) Most of all, the couple yearned for “a house that looks like it’s been here forever”; however, “here” proved to be somewhat vexatious.

“They had a nice sloping wooded site with good exposure toward the southeast,” says architect Michael Imber, whom the couple found through a friend. “But the house had to be oriented around a rocky ledge, a ravine, and several specimen trees.” Imber took the challenge in stride. His firm, Michael G. Imber Architects, “is sensitive to culture and environment and the way we build in response to that,” he asserts. Recognized in 2009 as a “Top Mountain Architect” by Mountain Living magazine, the firm embraces the rough and varied landscapes of the western United States as a natural palette for its structures.

Indeed, this house was designed to work itself into the Texas hill country landscape—rolling, somewhat rugged hills that consist primarily of limestone. “There is a lot of topography here,” says the husband, a geologist, “and we wanted to situate the house to take advantage of some of the lot’s drama.”

In response to the topographic quirks of the site, the 5,000-square-foot house is an amalgamation of major blocks and low-slung connectors, all of which follow the natural outline of the woods. To the north of the entryway sits the master bedroom suite, including a large office, and on the south side of the entryway are the interconnected kitchen and living, dining, and family rooms.

The entryway itself opens into a gallery, beyond which the living room, with its 20′ ceilings, “is reminiscent of a barnlike structure,” Imber says. At one end, a large picture window looks out at the woods.

Adjacent to the living room, the dining room is a more intimate space with 9′ ceilings that is oriented toward the outdoor living area provided by a screened-in porch. “We use the porch every evening from March to October,” say the homeowners. “It’s like another room.” San Antonio is often referred to as “a place where the sunshine spends the winter,” and an outside fireplace has become a common feature of Texas homes. This family also has a grill area out near the pool, which is intentionally hard to find. “We wanted the pool to be something people would come upon, like a rock pond, not a focal point of the landscape.”

One of their other favorite spots in the house is a small sitting area outside the husband’s office. A triangular space that juts out into leafy treetops, it is “a perfect little viewing area looking toward the rocky ravine below,” says Imber, adding that it was “a good way to capture space.” With two wing chairs facing one another, it also provides an ideal setting for parent–child conversations, the adults have discovered.

“There is no organizing aspect to the floor plan other than working the masses around features of the site,” observes Imber, noting a very large cedar elm in front of the house, one Virginia cedar, and other trees, primarily live oak, that the homeowners insisted on preserving. As a result, in several rooms of the house, especially the children’s upstairs wing, trees are at eye level, producing the effect of living in a tree house.

Country lovers, the family plans to build a barn for horses on an adjacent lot they own and have also decided not to deer-proof their property with unsightly fences, even though the animals, they say, “are a bit of a nuisance.” Landscape architect John Troy used native plant choices, eschewing the type of formal landscape design that would contradict the organic nature of the house. “John attempted to accentuate the architect’s vision,” say the homeowners. “The house looks like it’s growing up out of the landscape.”

Building materials, too, were chosen with an eye to blending the house with its natural setting. During the Paleozoic era, this part of Texas was underwater. Dense, crustaceous Leuders limestone, quarried nearby, was used extensively for both the exterior and interior of the house. Described by Imber as “a very rich caramel-colored stone that gives a warm palette,” this particular mix includes some rather large fossilized gastropods that were culled out and used to accent the entry and rear porch, a special feature for the geologist homeowner. Together with the stone, a copper roof, warm-toned plaster, and cypress with a weathering stain, it creates a naturally inviting exterior that ages well. “All the materials are traditional,” says Imber. “We’re just using them in a new, fresh manner.”

Inside, more Leuders limestone harmonizes with warm woods, particularly the handsome stained vertical-grain fir that is used for all doors, ceilings, cabinetry, and most of the trim. The floors, with the exception of the Oklahoma Sugarloaf stone floor in the gallery, are reclaimed longleaf pine. Mahogany distinguishes the master bath.

While observing that their house leans more toward the German vernacular of Fredericksburg than Spanish Colonial architecture, with perhaps a few Texas frontier-like elements, the owners of this rustically sophisticated hill country gem are adamant that the house “has its own style. It can’t be pigeonholed into a regional architectural category.”

What’s clear is that the family cares less about labeling the house than living in it. “We don’t lead a particularly peaceful life,” says the husband, “so the house is like a retreat. I would much rather stay home, have coffee and a plate of pancakes on the screened-in porch, and read the newspaper than go on vacation.” This begs only one question: Do they take reservations?

Janice Randall Rohlf is a freelance writer who lives on Cape Cod, and is the former editor of Cape Cod View magazine for the Cape Cod Times.

Arts & Crafts and More in Pasadena

The Complete Package in Nantucket