Poised to build a new home, Lauren Wylonis faced a beautiful conundrum: how to best express her love of 19th-century English Arts and Crafts style on a pastoral 108-acre home site located on Philadelphia’s Main Line—one of the largest intact tracts on this genteel byway west of the city. As the owner of KingsHaven in nearby Paoli, Wylonis had an ideal perch to guide the home’s design. She envisioned classic English style that would fold in traditional medieval Tudor’s lofty characteristics: masses of stone and wood, a steep-pitched roof, gangs of windows, and exquisite detailing, all organized around a long axis.

We wanted a home with patina, character, style, and craftsmanship, as well as one that met space and functional needs of kids and teens of varying ages,” Wylonis says. She also wanted a house that was cozy enough for her children and guests, but also able to accommodate dinner parties of 100 or a family wedding.

Wheeler wrapped his arms around the challenge, creating an L-shaped design that exposes all the rooms to views of the site’s lush rolling landscape. “Basically, the house is only one room wide, so you have exposures on both sides,” Wheeler says. “It’s very light and airy.”

Named Agincourt, the house is also breathtaking, with visually pleasing massing and an interior layout with long views that lead to spacious windows showcasing the outdoors. The 14,500-square-foot home offers plenty of public and private space for the family, including a first-floor library, orchid room, and guest suite, in addition to the traditional family rooms, and, on the second floor, five bedroom suites. A swimming pool and spa are housed in a separate wing that was half-timbered, stuccoed, and pegged. Back views reveal a sweeping stone terrace that edges several of the public rooms.

It was important to Wylonis that the house showcase lush textures, natural colors, and beautiful wood, to establish warmth and beauty. “I have a passion for art,” she says. “I love to paint and make pottery and tiles.” Agincourt reflects her sentiment, creating a space that speaks of the past yet accommodates the future. Stone, wood, plaster, and ironwork become unifying elements.

The grand tone begins in the 20-foot-high entry hall, a castellated space with decorative painted wood paneling covering the walls’ lower half. Light from a large bay window and an iron chandelier spills over the creamy walls. The front door, oak with bronze hardware and iron strap hinges, was salvaged from a historic Tudor home. The door was then reproduced with less detail for other areas.

“All the plaster and woodwork details are based on Medieval English precedent and, along with exposed timber beams, rift-sawn oak floors, and distinctive light fixtures, became a unifying theme throughout the house,” Wheeler says. The lighting for the house was variously sourced: antiques that Wylonis found in London, Kings Haven antique reproduction fixtures, pieces found in antiques stores and salvaged from demolitions, as well as designer light fixtures.

The interior wood features are shining pieces of artistry, including the main staircase adjacent to the entry, with balusters that are spiral turned (or “barley twisted”). Wheeler says the crew went through many samples before settling on this particular graceful twist. “We kept increasing the twists to see what worked,” he says. “That was fun.” The newel posts with caps were specially designed.

In the family space, which includes a 28-foot by 50-foot kitchen, wood beams add warmth and intimacy by demarcating the breakfast, kitchen, and family areas. Wylonis oversaw the design of a hand-carved backsplash on a kitchen buffet cabinet, based on an English Gothic panel from a 17th-century antique. “I photocopied an image of the panel, cut the image into pieces, and restyled the pieces into a different design,” Wylonis says. “I then made several complementary panel designs and had a local craftsman carve them.” A craftsman also carved lions in a shield for the corners of the kitchen island that represent the lion on the Agincourt Manor Crest.

The orchid room, at the end of an enfilade next to the library, is as beautiful as its name. Sun pours through four pairs of doors, with Tudor-arched transoms and muntins that reflect Gothic era tracery, pooling on the marble floor. Above is an English-style plaster cornice in latticework design.

Throughout the home, the eyes light on beautiful features. A built-in bench is tucked in a cove in the living room. The dining room sparkles with a Georgian fireplace in contrasting marble and a plaster coffered ceiling with an ornamental cornice and ceiling medallion. A salvaged antique stained glass window dresses up a door. A lovely stone garden loggia appears like a storybook cottage in a corner of the lawn. All were designed with pristine detailing by Wheeler, his team members, Wylonis, and Mimi Boston Johnson of KingsHaven Design.

Milner and Wheeler agree that Agincourt was a very rewarding, fully collaborative effort. Wylonis, for her part, feels the completion of an important part of her life. “This house was a beloved art project for me,” Wylonis says. “Ed Wheeler and John Milner were tremendous at creating exactly what I had envisioned.” 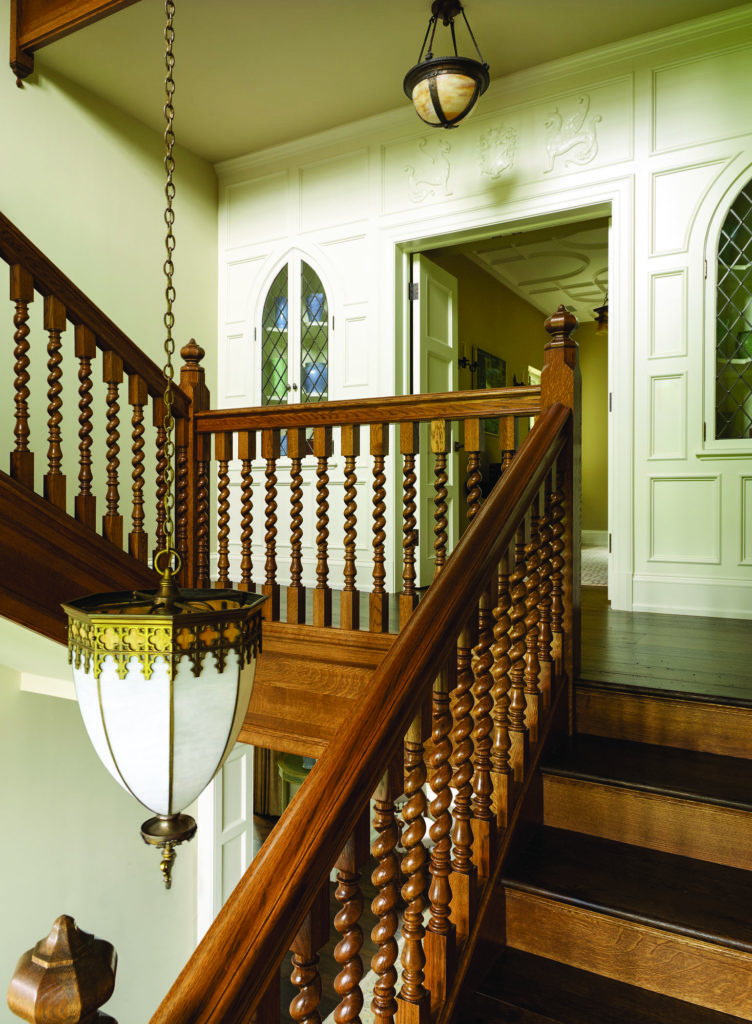 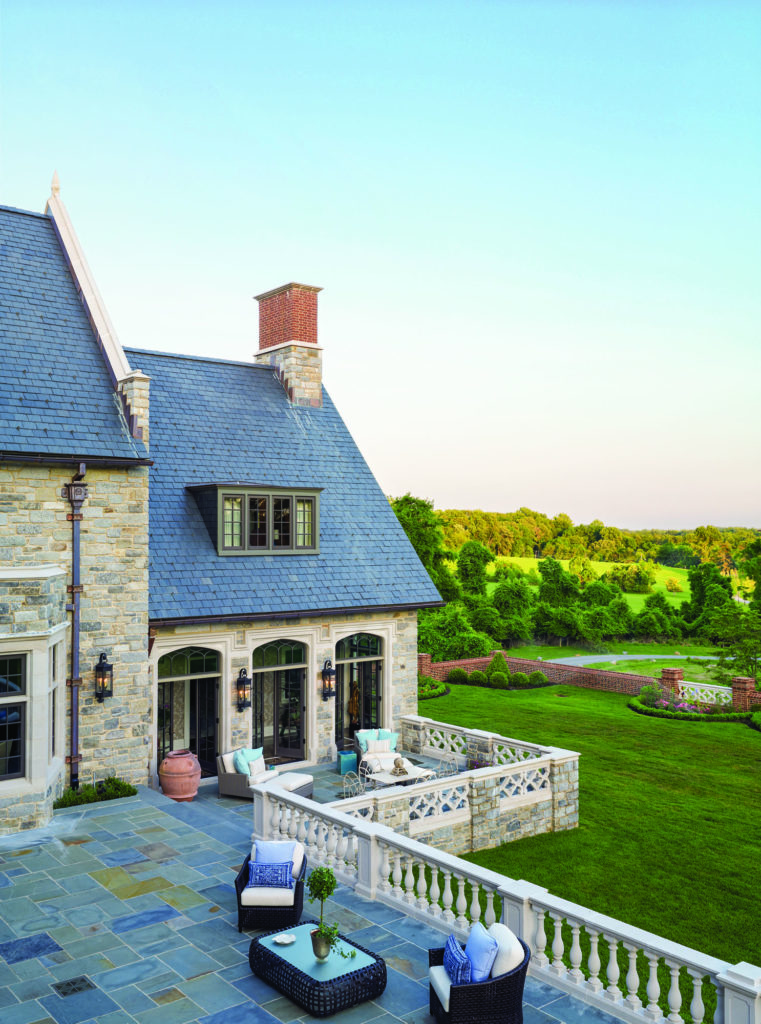 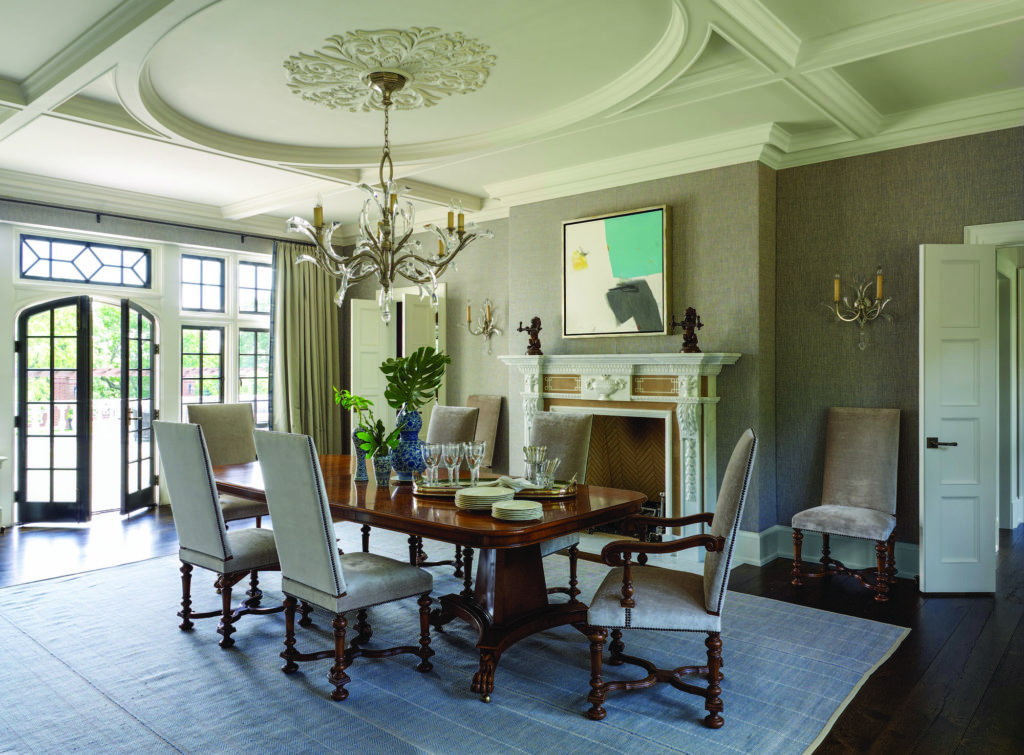 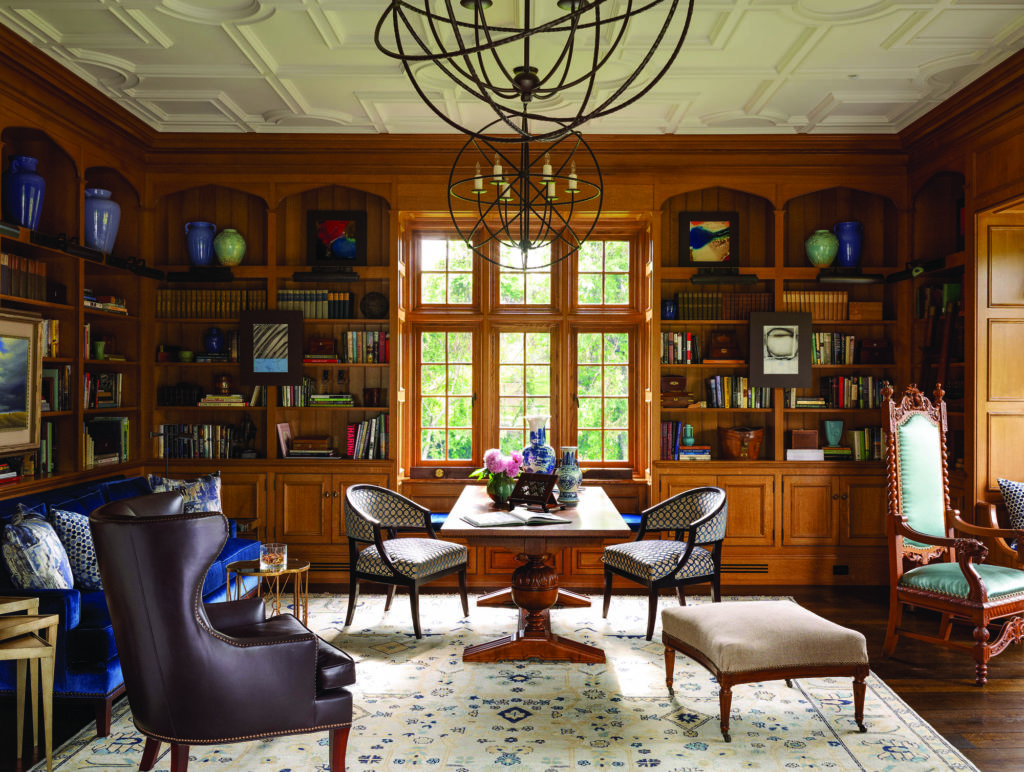 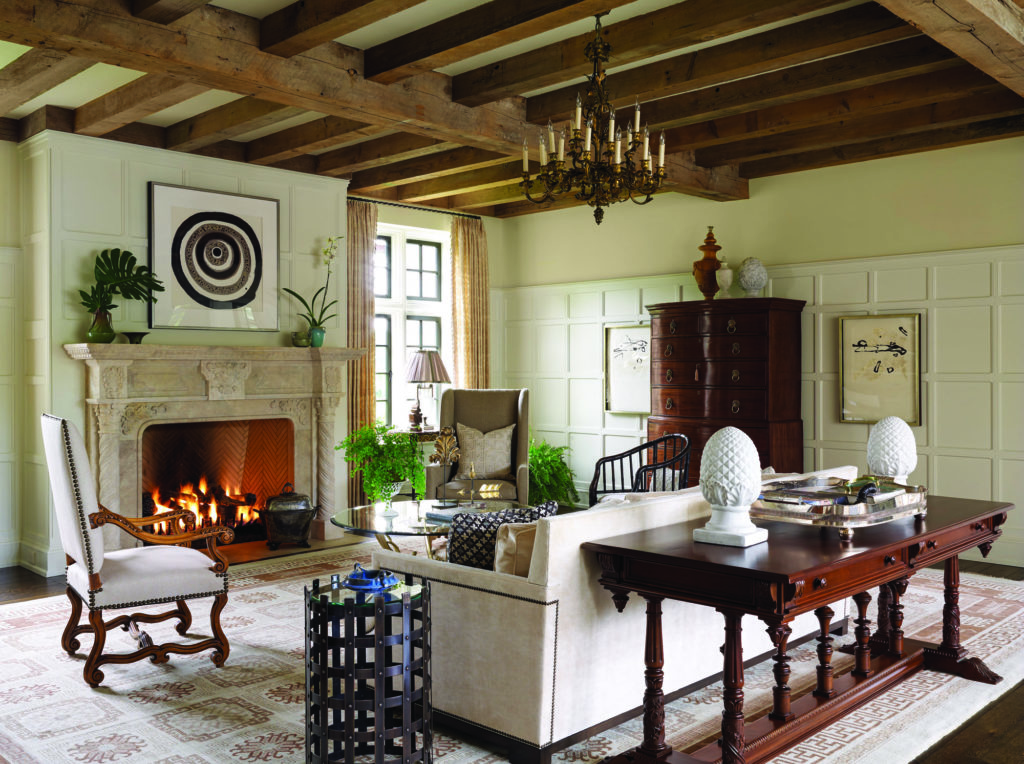 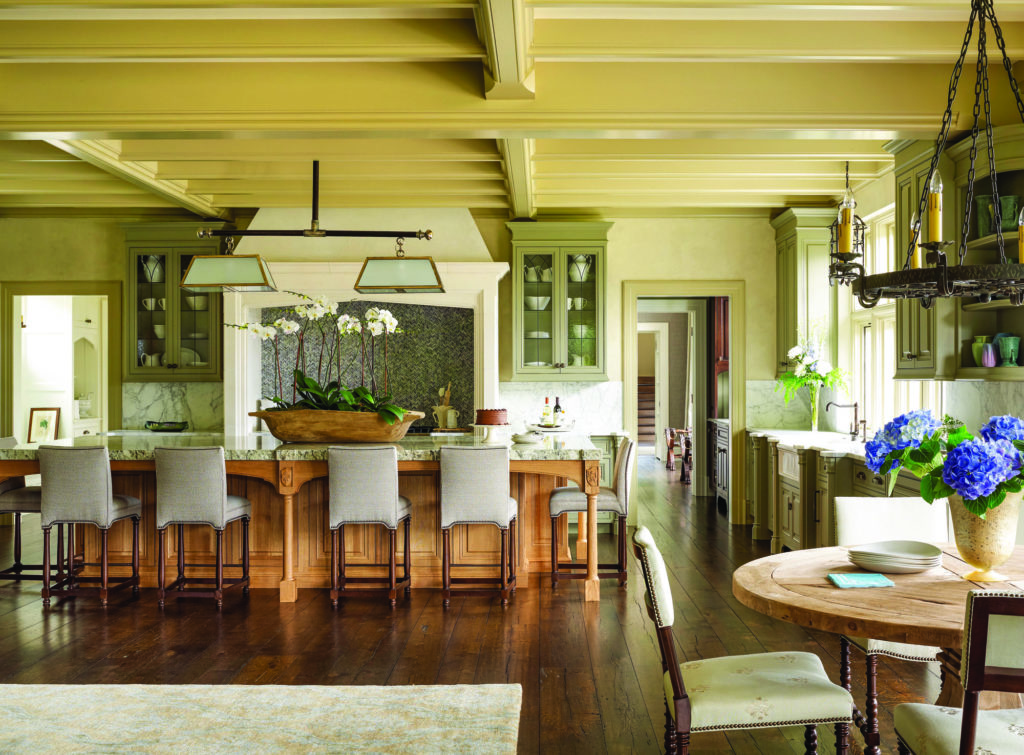 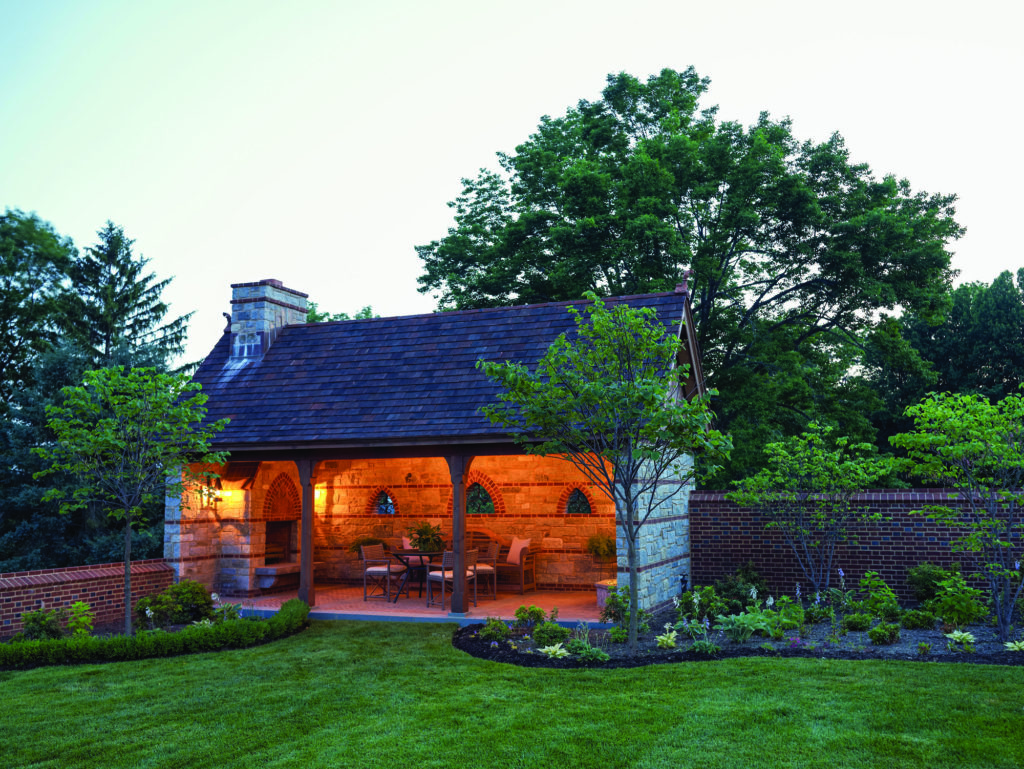 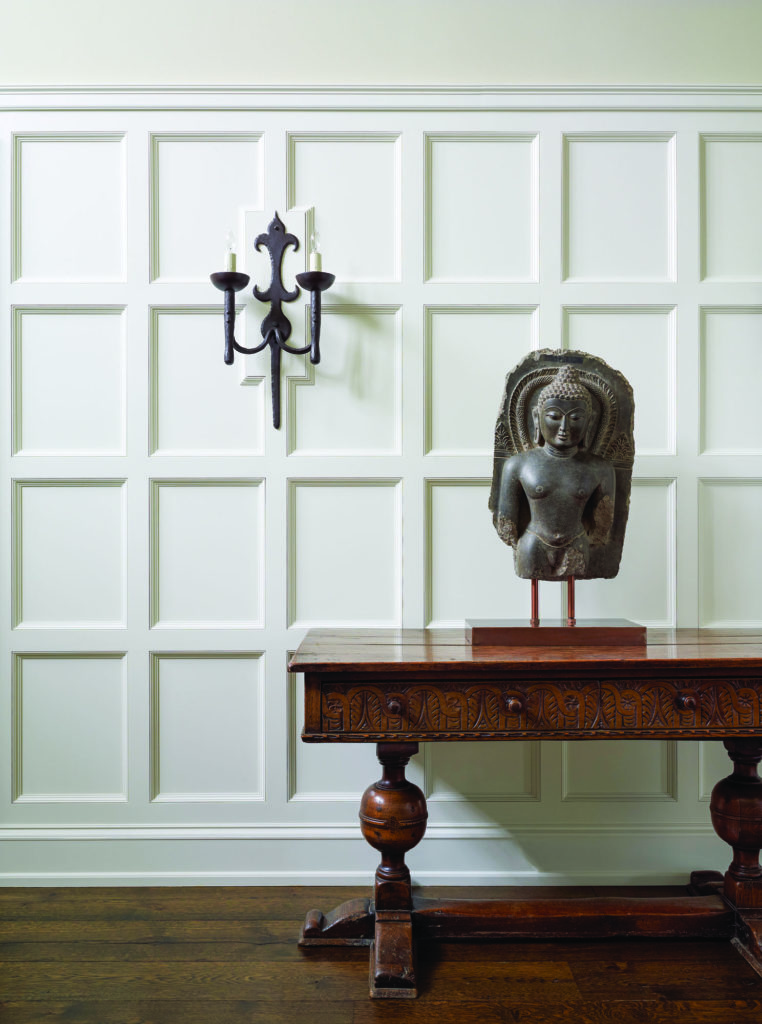 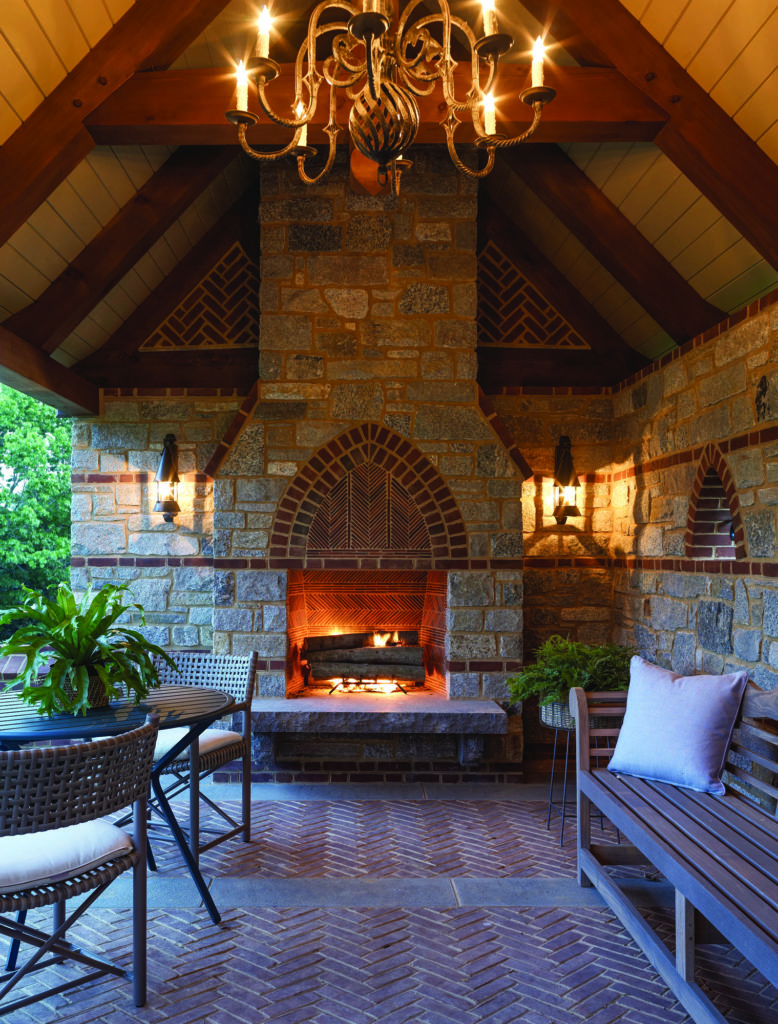 Setting the Tudor Style Mood
> Think of lighting a room the way you would music at a party: Lighting sets the mood and inspires guests to dance, laugh, and chat, as well as defining a space for those activities. It adds a layer of interest and defines the party. Consider a dimmer to allow a fixture to evoke a broader range of moods.

> Think of lighting as a team effort, first and foremost considering natural light as an important team contributor. When designing a home, site it, when possible, in a way that maximizes natural light, especially in highly frequented rooms such as kitchens and family rooms and on outdoor patios, pools and pool houses. Historic homes were built to utilize natural light, so this sort of siting makes a new old home feel authentic. Drama and mood can be damaged by overlighting a space.

> Consider using the power of juxtaposition. “I find that beautiful antique or antique reproduction fixtures deftly placed throughout a new home can give a sense of patina and story that enlivens a space,” Wylonis says. Some of the most impressive lighting in a historic home can be a contrasting transitional fixture, perhaps edgier or oversized. This gives a traditional space a fresh update.

> Choose your starring artworks or main light fixture first and build the space around it. An amazing chandelier or pendant is often the key to lighting an exceptional space. Choosing sconces and table lamps that are complementary but do not match can offer a sophisticated patina.