The old Dunbrack Library in southern Pennsylvania had sat shuttered and unused since closing its doors in 1958, its only inhabitants powder-post beetles and a snaking trumpet vine. Still, “it was a lovely structure,” recalls Christina Griffin, who adds that there were holes in the roof and in the floor, and that most of the window openings had chicken-wire in them.

Christina wanted to rescue it and turn it into a summer retreat for herself and her husband, George. But the owner, her own uncle, wasn’t selling. Twenty years later, when the building was slated for demolition in 1994, she asked him again. He relented but made a stern demand: “I had one year to fix it up,” she says. “If I did it right, he’d give it to me.” Done, with four months to spare.

Today, rooms inside are vibrant with paintings, sculpture, and photographs in a decidedly eclectic decorating scheme, very different from the original institutional use. Christina explains that interior is a result of the couple’s life abroad. “This house has all the fun stuff I couldn’t put in our city home.” An elephant-footed side table and a 6′-tall wooden giraffe traveled with them from overseas, reminders of George’s State Department job that took them to Kenya, India, and Italy. Witty collections, from produce-inspired oil paintings to toy-size chairs, share the space with a bird-cage chandelier and a South American-style menorah. 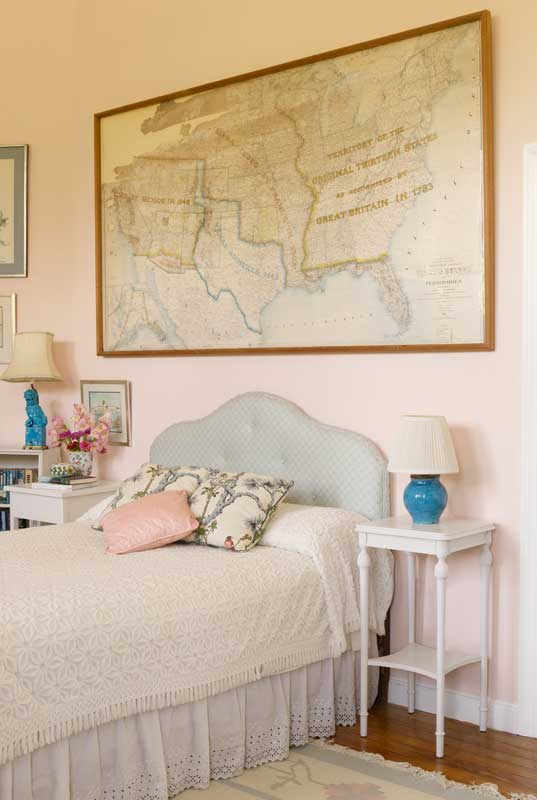 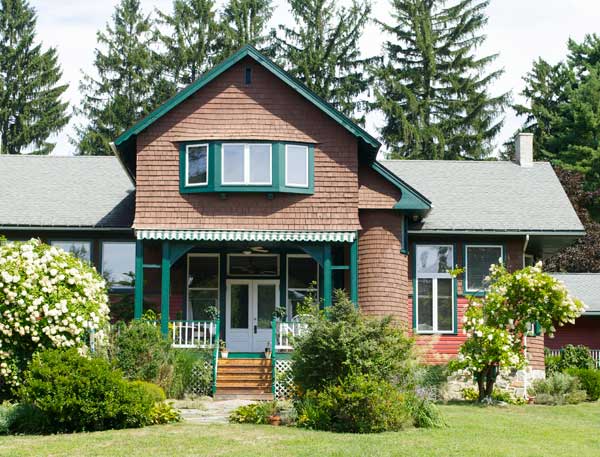 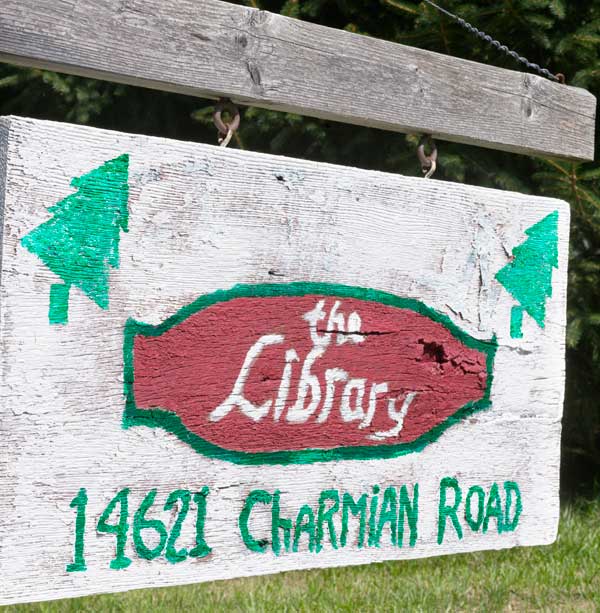 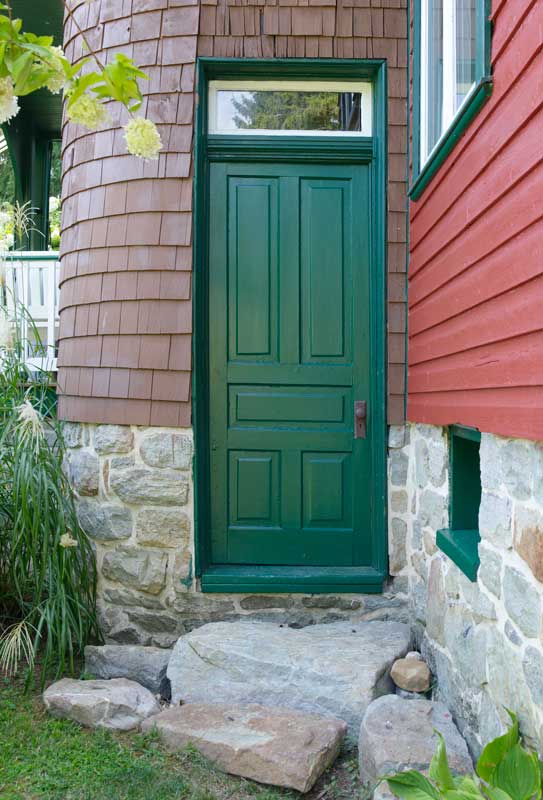 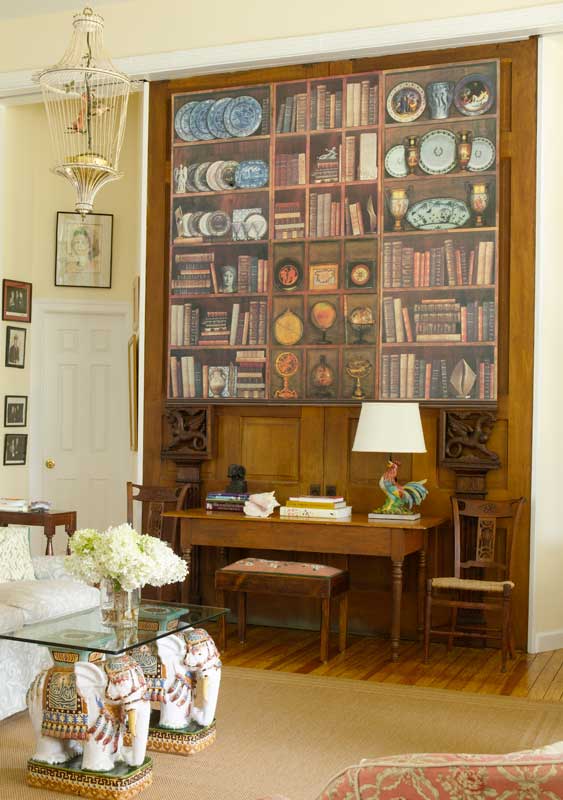 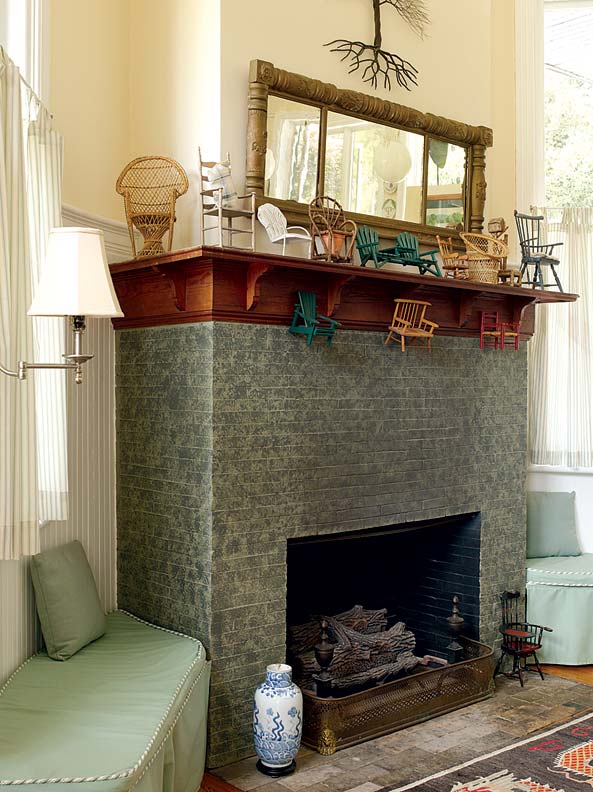 Doing the hour-long commute from Washington, D.C., to the Pennsylvania property as often as she could, Christina worked closely with her local contractor to make over the building. “I wanted to retain as much of the original as I could,” she says, though she adds she was a renovation neophyte. The rustic yet elegant library, a Queen Anne Revival building with Shingle Style and Arts & Crafts elements, had remained surprisingly unaltered since it was built ca. 1894. Several built-in bookcases remained inside, and even a small stage. “Nothing had been done to it in 95 years,” Christina says, good news for the purist but a financial hit, as the building needed insulation, a heating system, and new electrical and plumbing systems. It also needed an exterminator to get rid of wood-eating insects.

Christina had been “coming to the mountain” since childhood to visit her grandfather, Eugene O’Dunne, a Baltimore judge who owned the Dunbrack Inn and cottages behind the library. This community rallied around the Griffins, glad that somebody was fixing the neighborhood eyesore.

The interior was a wide-open shell: three 25′ x 20′ rooms separated by two huge pocket doors, with an unfinished attic accessible by a rudimentary ladder. Time-stained beadboard covered the bottom half of the first-floor walls. Christina had the walls insulated and put up new drywall. White paint on the old beadboard and trim brightened the interior considerably. Pine floors were refinished.

During the work, Christina found something wedged in the basement rafters. Thinking it trash, she threw the paper out the window. “It unrolled in the snow—and I saw that it was an old map of the United States.” She framed the classroom-size 1897 map.

The open floor plan was generally pleasing to George and Christina, but beyond the galley kitchen the space seemed too open. Christina actually dreamed of the solution: using the set of 12′-tall pocket doors as a room divider. That allowed for sensible design of a bathroom, guest bedroom, and storage space.

In lieu of the old ladder, a new, winding staircase leads to a master suite. Christina says that at first she didn’t intend to remodel the attic, but she’s happy she followed her contractor’s advice to take that space.

For his serious photography hobby, George designed a one-story studio/office at one corner of the dwelling, built to match.

As it turns out, the couple spends most of their time here. “At our very first party in the library,” Christina says, “everyone was asked to bring a book.” The old bookcases are full once again.