Before Bill and Muriel Anderson even purchased their St. Paul home, they knew a major renovation was in the cards. The couple’s son uses a wheelchair, so they sought out a home they could retrofit for accessibility.

The 1902 Foursquare, with its large rooms and spacious hallways, was the perfect candidate. The Andersons converted a two-story porch on the rear of the home to an elevator shaft, retrofitted the bathrooms, and updated the heating and electrical systems. But after 16 years in the house, they still hadn’t gotten around to tackling the biggest project of all: Restoring the appearance of the living room, parlor, dining room, and foyer, where many original architectural details had either been removed or painted over. “It was too large a project for us to think about,” Muriel admits. “The others were much smaller spaces.”

But when their son decided to have his wedding in the house, the Andersons knew they couldn’t put off the work any longer. To help them get a handle on the project, they brought in David Heide of David Heide Design Studio, an architectural design firm that specializes in historic restorations, including several homes in the Andersons’ neighborhood. 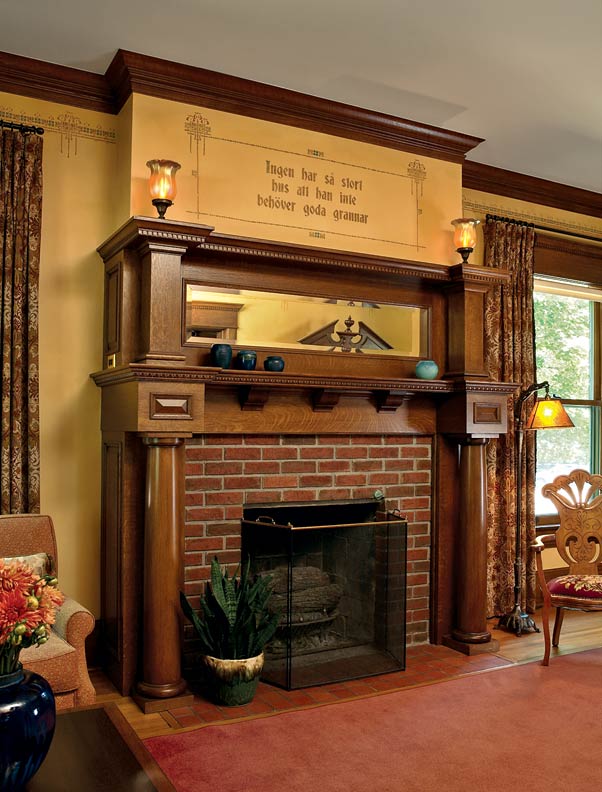 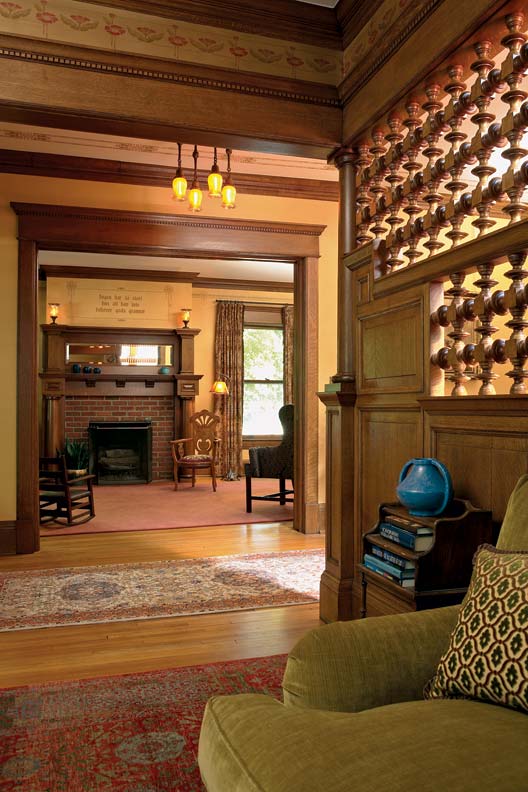 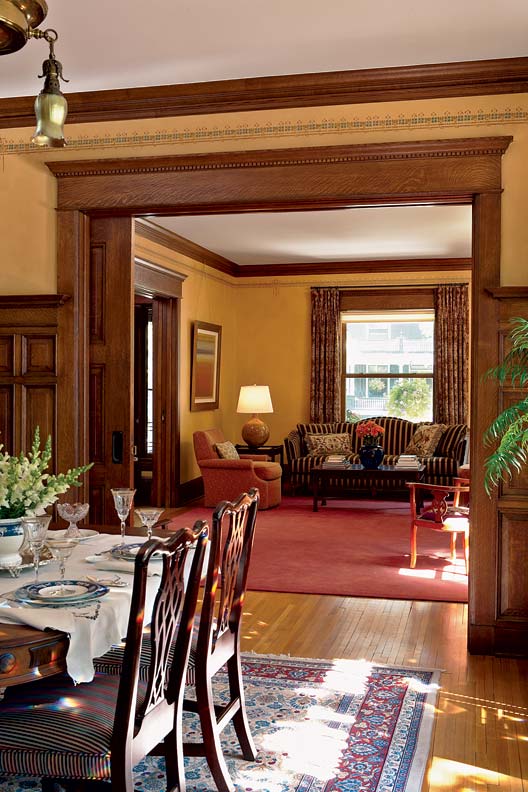 The first order of business: Stripping layers of white paint off of the home’s ample woodwork, which Bill estimates had first been covered sometime in the 1920s. As the paint came off, new information about the house’s original features was revealed. “We did a little investigative demolition while removing the paint to see what we were up against,” says David. “That’s when we began to realize that some things had been changed. We started to take out pieces we knew weren’t original to the building to understand what was left.”

Among the items removed was a plywood box that had been inserted into an opening between the parlor and the staircase. After the DHD team had stripped some paint off of the surrounding woodwork, they noticed a nailing pattern—evidence that an intricate screen had once appeared inside the opening. Using this pattern as a guide, DHD borrowed details from the stair balusters to re-create the screen. “We had no idea what it originally looked like,” says Bill. “It was all conjecture,” David agrees. “We just played with the geometry of the screen.”

They took a similar approach with the fireplace surround in the living room—an equally surprising discovery unearthed during the paint removal. “As we did more test-stripping, we realized that the fireplace surround wasn’t quarter-sawn oak, like the woodwork in the rest of the room,” David says, which was the team’s first clue that the surround wasn’t original to the house. Confirmation came after they removed the room’s painted wallcovering, which revealed the ghost of the original overmantel on the wall. Once again, they augmented this limited information with details pulled from the staircase and other original millwork to create a new fireplace surround.

At first, Bill and Muriel weren’t entirely sold on the new elements. “The screen seemed so large,” explains Bill, “but David said, ‘Once it’s in place, it will look like it should have been there all along.’ ” Muriel’s concerns about the fireplace surround were also allayed once she saw it in context. “I thought the mantel was absolutely humongous,” she says, “but once it was installed, it absolutely fit.”

There was one new detail they loved immediately, however—the two sets of reproduction pocket doors separating the living room from the dining room and the foyer. The absence of the originals was also uncovered during the paint-stripping process. “We had no idea they had been there, but we really liked the idea of replacing them,” says Bill. The original track hardware was still intact, so David and his team copied the paneling details from doors elsewhere in the house to make two new sets of doors, then fitted them with heavy-duty hangers sturdy enough to handle their hefty weight. When one door refused to stay open because the house’s settling had shifted the door opening (and original track) substantially out of plumb, David’s team opened a small hole in the wall and shimmed the track to make it level.

Once the architectural details had been restored, David set out on a search for decorative items to complement the home’s new appearance. Merging Craftsman and Victorian influences, he outfitted antique light fixtures with new art-glass shades, and paired faithful reproduction furniture with reupholstered antiques that Bill and Muriel already owned. “In old houses, the overall aesthetic should be more of an assemblage of things,” David explains. “It adds richness.”

He also hired artist Amy Miller of Trimbelle River Studios to create a subtle stencil on the foyer ceiling and on the frieze in the parlor, dining, and living rooms, culminating in a Swedish quote above the fireplace that translates to “No house is so large that you don’t need good neighbors”—a tribute to the couple’s Scandinavian heritage.

Even though the restoration work exposed many of the house’s secrets, Bill and Muriel added a few surreptitious touches sure to delight future owners. Before the mirror over the mantel was fitted into the surround, the entire restoration team signed their names on the wall behind it. Bill and Muriel also created a time capsule, which they inserted into the newel post on the stairs. Given the effort it took to reverse the damage done by previous owners, Bill and Muriel left a warning for future inhabitants of their house: “Inside the time capsule is a curse,” says Bill. “It condemns anyone who paints the woodwork to be soaked in paint stripper!”