For years Carolyn Fontaine had been reading and saving old-house magazines because she was determined to, some day, renovate the kitchen of her ca. 1750 Cape Cod-style house in Plympton, Massachusetts. When she retired, it was time. In her magazine stack she found contact information for Richard Mecke, whose company Historic Homes, Inc., located in Salisbury, New Hampshire, has tackled more than 500 old houses in 40 years, including the Fairbanks House in Dedham, Mass., generally regarded as the oldest dwelling in the country.

“For historic houses, we do everything,” says Mecke, whose career began when he worked for a Native American stonemason in Plymouth, Mass., and subsequently developed skills as a stonemason, carpenter, and house inspector. “Mostly, I like the pre-Revolutionary houses, and some Federals as well. I’m not an advocate of the machine-made.”

Mecke visited Carolyn Fontaine in her small town near the coast, and at first meeting spent two hours studying the one-and-a-half-storey structure. “Someone had done a sad remodel in the 1970s,” he says. “There were Styrofoam beams on the ceiling.”

“The kitchen had beige carpeting and I inherited asbestos tiles,” Fontaine adds. “I knew I did not want to blow up the existing kitchen, but I did want a kitchen that was functional.”

Fontaine considers the kitchen and keeping room to be one space, so Mecke designed cabinets to hide refrigerator and dishwasher. “She didn’t want to see the appliances,” he says. “So we made them disappear behind new cabinets patterned after old jelly cupboards. We installed a granite sink that we made; as a faucet, we used a 19-century copper hand pump. We took up the linoleum and installed new flooring. In the keeping room area, we built a cabinet to hide the TV.”

Mecke believed that the original ceiling beams were still there under the ceiling with fake beams. The large cooking fireplace was exposed. “I explained to Carolyn that the ceiling in the working kitchen would not have been plastered, and we’d find smoke-oxidized beams and joists if we opened it up.” He was right: “There were the old beams, just as you would expect to see them after many years of exposure to wood smoke, darkened and covered in creosote on the fireplace end of the room. It’s a wonderful example of what was here in 1750.”

Mecke and his team of three removed 1970s work from the massive keeping-room fireplace, which still has its beehive oven. (Historic Home’s Jim Decosta and Brandon Dion worked on the project.) They aged new bricks for patches. They restored paneling and replicated it as necessary. Mecke built a 10′-long trestle table with a top made from a single pine board. The table is patterned after the 17-century Behrend table at Richardson’s Tavern in Medway, Mass.

To give them patina, the 1980s dining chairs were stripped of a shiny finish and redone in milk paint. Mecke also installed pine floorboards and made wall cupboards and a spoon rack. “When the kitchen and keeping room were done, they looked so good, the parlors suffered by comparison,” Fontaine says. “That led us to phase two, the front rooms.”

Her budget prevented Fontaine from doing all the work she would have liked to, including replacing some 1990s windows. Instead, Mecke reframed them and Fontaine hides the hardware behind simple swags. The front door, too, was an incorrect later replacement. 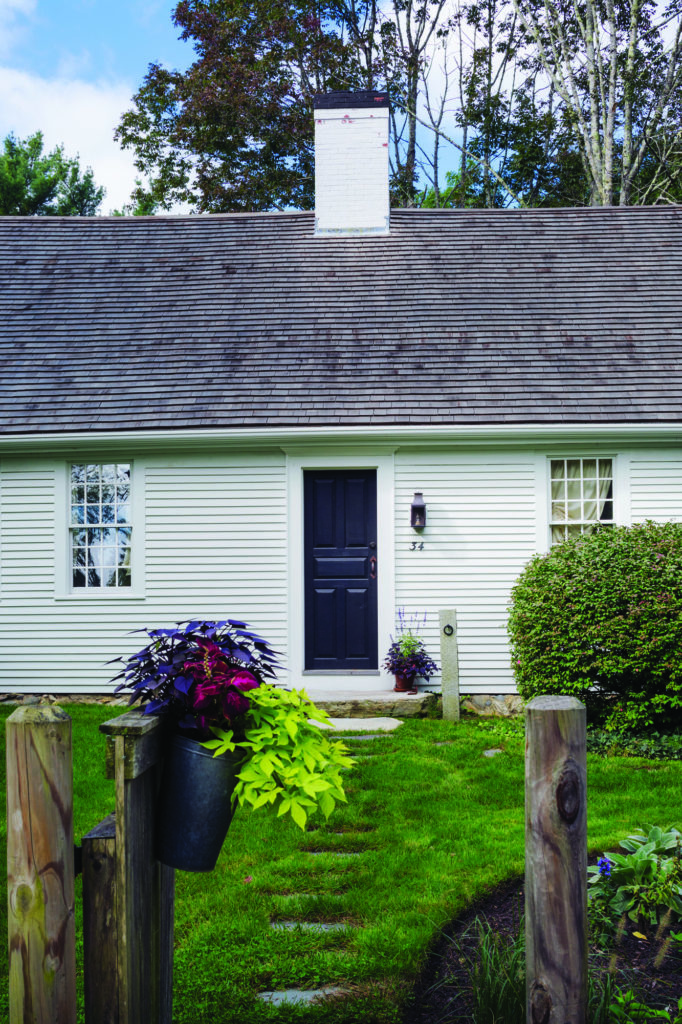 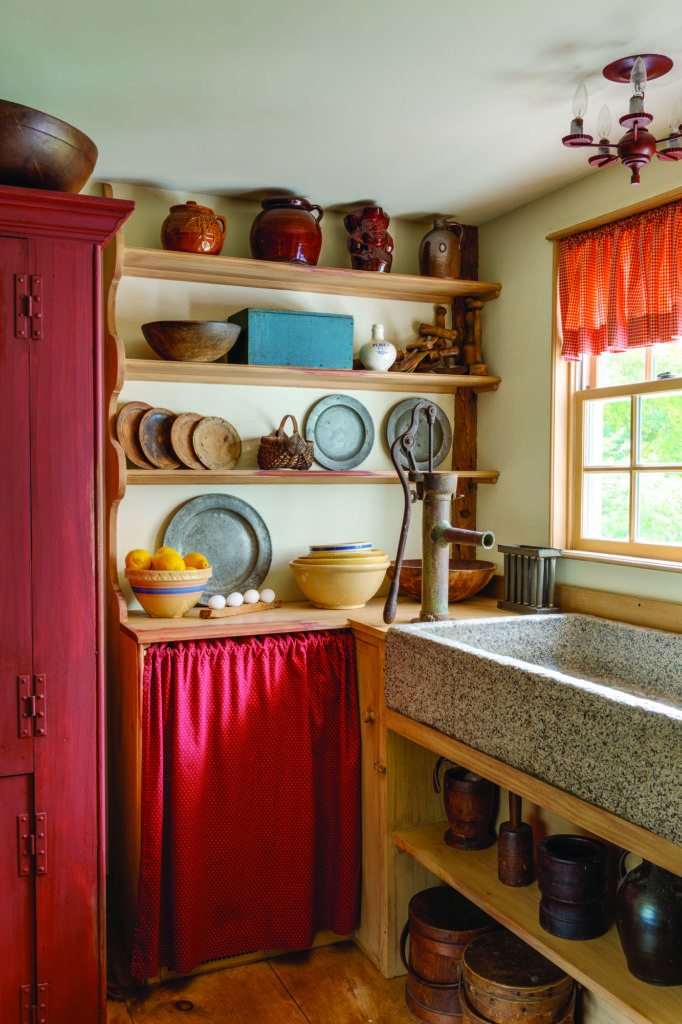 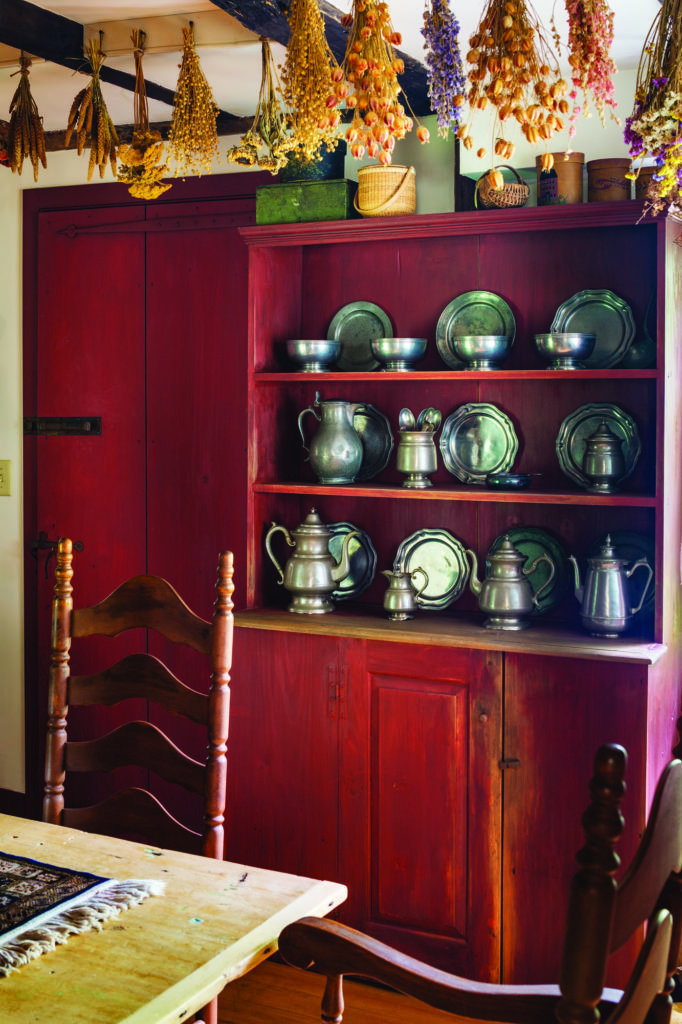 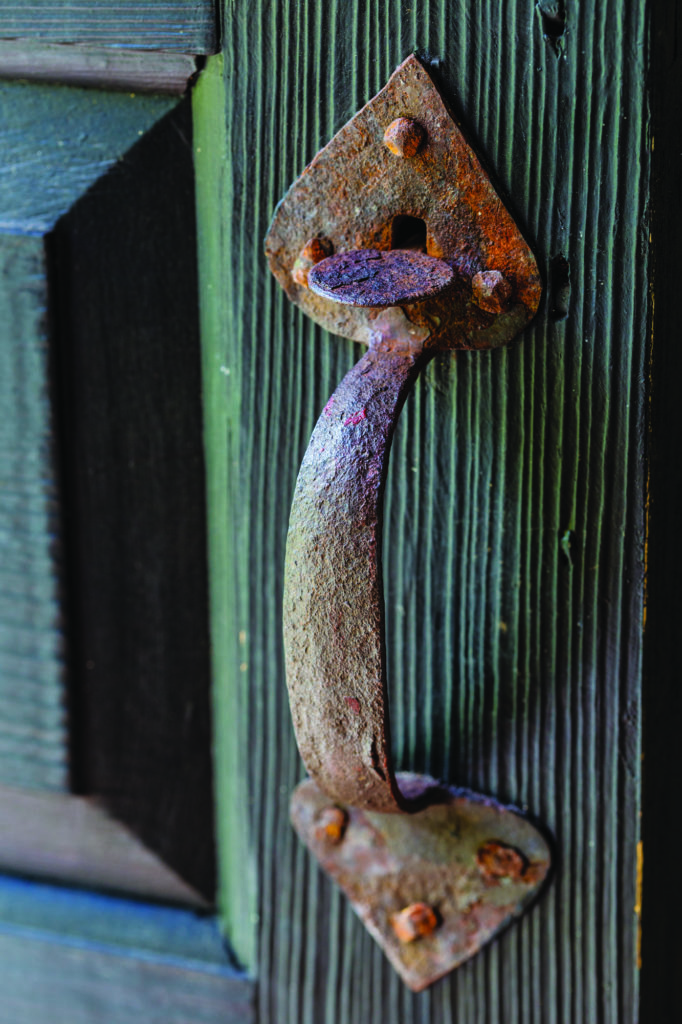 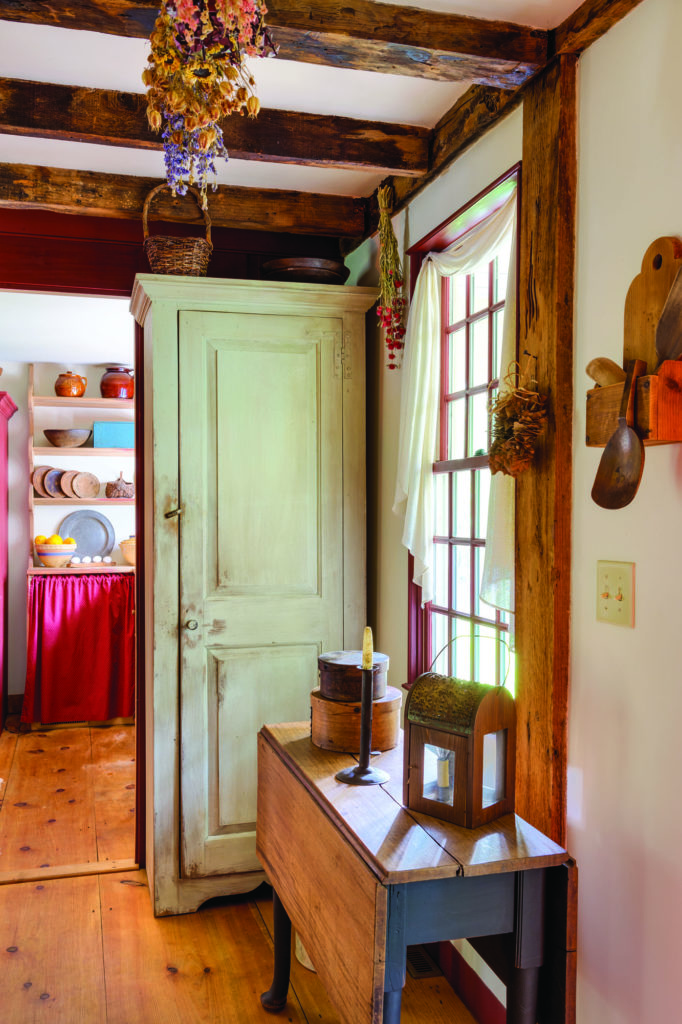 “It’s too narrow, but replacing it with an appropriately proportioned door would have meant cutting into the front façade—a really big project that Carolyn simply could not do,” Mecke explains. “So we built a new front door and surround. The chimney, too, had been made short and stumpy during the 1970s. We found close-matching 1970s-type bricks, added two feet to the chimney’s height, and painted it to hide the newness.”

“This house is simple and unpretentious,” Carolyn says. “I always loved it, and when I retired and my husband passed away, it became a place of solace.”

Making Budget Choices
Richard Mecke admits that full restoration of an 18th-century house can be costly, but he hastens to add that work can be done on a budget. As examples, he points out choices made at Carolyn Fontaine’s Cape.

“Replacing all of the windows with period reproductions would have been beyond our budget. Since the existing windows were in good shape, we framed them to give the 12-over-12 light sash a more convincing look.”

He added height to the chimney that had been truncated in the 1970s, instead of building a new chimney from the roof up. The too-narrow front door opening was left as they found it, but the door itself was replaced with a more authentic 18th-century reproduction, then painted black and fitted with a rusty, vintage thumb latch.

“People have budgets,” says Mecke. “Few of us can do everything we want. Restoration pros can help homeowners decide what is most important in terms of function and aesthetics.”

Two elements he deemed critical to appearance here were a taller chimney and a roof made of cedar shingles. Passersby agree.

A Textbook 1920s Tudor in Portland