Poised at a juncture of craggy rock and blue sky, the North Carolina mountain home is more like a refuge than a destination, beckoning visitors to open the antique chestnut door, drink in the airy interior, and catch the hypnotic trails of mist rising around the Blue Ridge Mountains. No wonder homeowners Mary and Marshall Bassett, currently residents of suburban Philadelphia, see their home as a retreat.

The beauty of the house—which the Bassetts intend to live in year-round after retirement—is that it is so supremely different. This western, mountainous part of North Carolina is dotted with communities of summer people who spend the warm months in rustic, chalet-style homes. As sweet as the typical mountain architecture is, the Bassetts wanted a higher-style escape, a house infused with classical details and traditional forms. “It’s to be a permanent home,” Marshall Bassett says. “We wanted it to be more on the formal side because of the way we live.”

They also wanted to do justice to their collection of treasured family antiques, such as the 1810 slant-top desk in the living room, the blue porcelain dishes standing in the dining room’s built-in cabinet, and the early 1800s English needlepoints hanging on the walls, some of which originate in Marshall’s Southern roots. Another emotional pull was the family’s years of living on the Eastern seaboard and its beautiful old seaside cottages. “We’ve lived so long in the Northeast,” Marshall says. 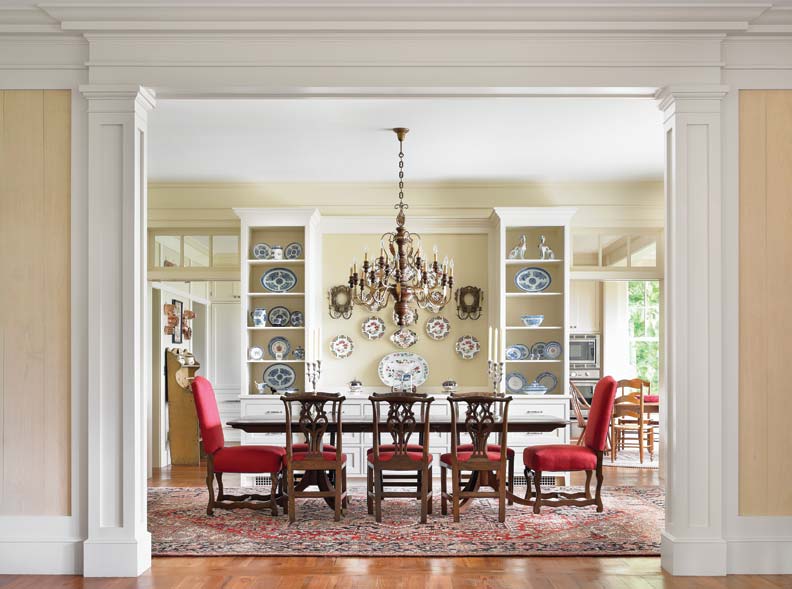 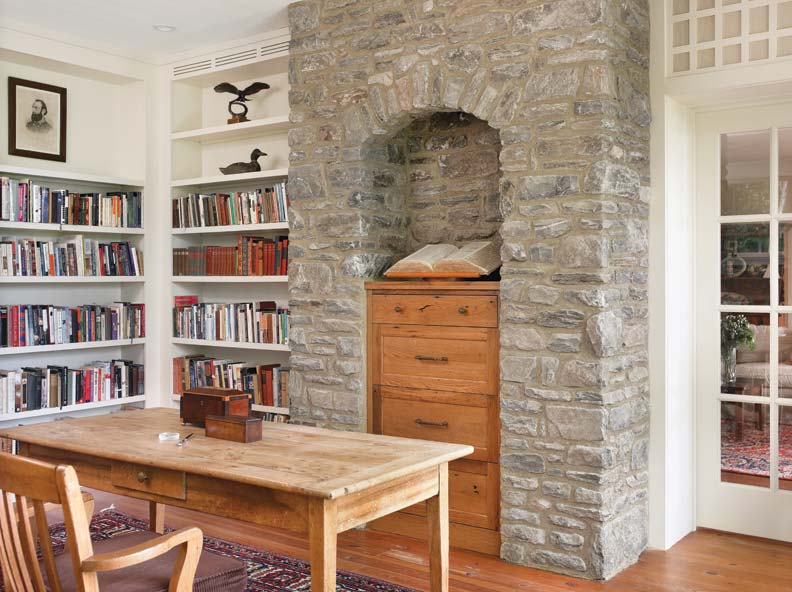 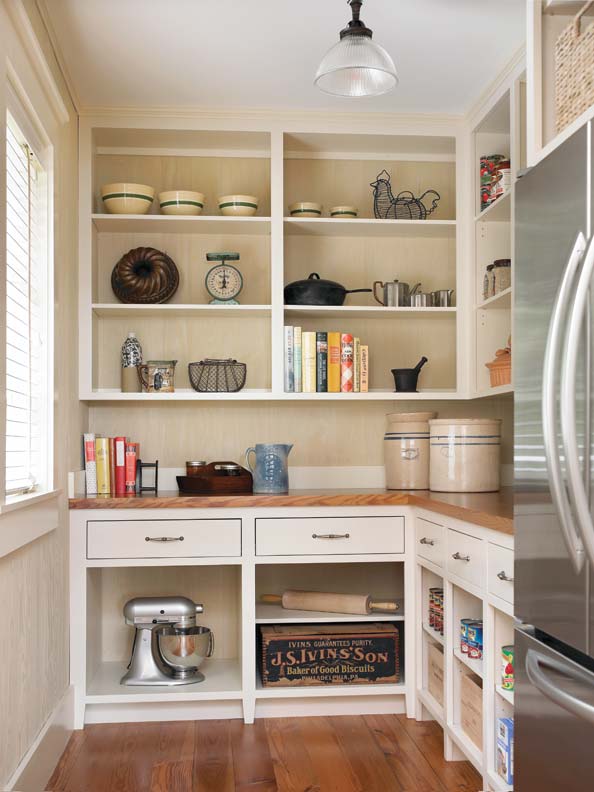 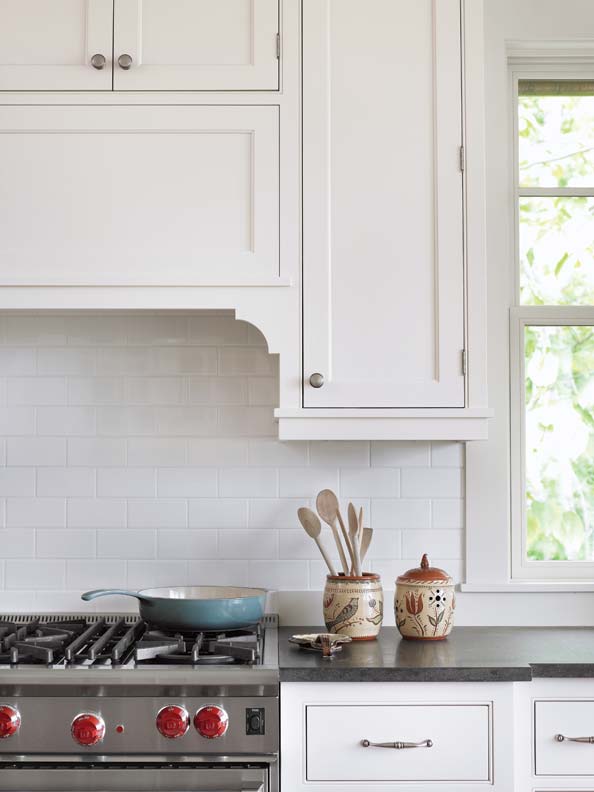 The Bassetts knew that building their retirement home would be a tall order: The house would need to express who they are and their family traditions, while allowing for a stylistic fit within the mountainous region—within the location’s steep grade and a nature-prescribed buildable envelope measuring less than one-third of an acre.

They found the key to their house at Historical Concepts, an award-winning traditional architecture firm in Peachtree City, Georgia. Terry Pylant, a firm partner and principal, guided the team of Historical Concepts and local experts, including Morgan-Keefe Builders in Asheville, North Carolina. “We wanted to achieve a certain formality,” Marshall says, “but we weren’t interested in cathedral ceilings and that type of thing. We chose Historical Concepts because of their traditional vernacular.”

Located in the Balsam Mountain Preserve, a gated community in the mountains outside of Asheville, the home’s design was a delicate balance for Pylant and his colleagues. While the Historical Concepts team was determined to rise above the wilderness motifs of much of the surrounding architecture, Pylant knew it was just as important that the house didn’t overpower the setting. Pylant succeeded by carefully distributing the space on the side of the mountain, separating a bedroom cabin, and tucking the garage into the terrain to give the appearance of smaller, slightly separated structures.

The resulting three-level home tells a strong, lovely story in nuanced style: simple but sophisticated, rich but warm and welcoming, traditional with a rustic edge. The first floor contains the main living space, all of it spacious and bright: living room, dining room, kitchen, and wine room. Clearly the Bassetts love to be here, in the common space. “The heart of the home is the kitchen, and the soul is the wine cellar,” Marshall says, lightheartedly. The dining room, framed by classical pilasters, is filled with the family’s treasured antiques, including Chippendale dining chairs and a Sheraton style table. With their daughter, Charlotte, the Bassetts often sit down in the window-lined breakfast nook, centered with a table that belonged to Marshall’s great-grandmother, the spot where she stored her butter churns.

Mixing classical style and the traditional aesthetic of the mountain region required a deft interpretive touch. “We decided to incorporate classicism in a softer, more nuanced fashion,” Pylant says. They did this by working with locally sourced materials—experimenting at times to see what worked—and, as he says, “reimagining regional detailing” for a new classical style language with a hint of regional dialect. The beautiful stone is all local, and floors are heart pine. The seaside touches of the Northeast that the Bassett family loves so much are seamlessly incorporated throughout: Palladian windows, the gambrel roof, a shingled exterior. “Like a lot of old beach houses, we wanted to rusticate it,” Marshall says.

The success of the intermingled approach is evident throughout the house: the Greek Doric columns crafted from rough, hand-planed timbers that stand in the entry portico; pristine detailing and millwork framing lightly washed wood walls; a stunning fireplace in the living room that reflects local tradition, but is softened and refined with a classical mantel. Railings on the side porch and back balconies were built with top and bottom rails of locust and filled in with free-form laurel.

Pylant achieved the interior’s easy-on-the-eyes mood by designing for maximum flow. “Since there are three levels, the stair became the vertical axis point,” he says. By placing the stair, with its sublime chestnut balustrade, in the home’s forward corner, Pylant says, “the connecting rooms radiate from that point at each level. The key is to minimize the connecting corridors.”

Pylant pulled from the talents of a team of local craftsmen, including stonemason Cody Macfie of Steep Creek Stone Works and landscape architect Barry Cosgrove of Barry Cosgrove Landscaping, both located in North Carolina.

Another key piece of the team was interior designer Kip Farmer, of Kip Farmer Design in Evansville, Indiana, who supported the classical style, woven with a vernacular understatement, with sweeps of neutral wall tones. The subtle palette allows the awesome views of the mountains to provide the color. “Kip was an essential part the team,” Marshall says.

Farmer recalls going to his first meeting at the site, hiking the last piece of the way, all the while “being so distracted by the breathtaking view, I could hardly focus on the construction meeting at hand.” Farmer let that awe and respect guide him. Like Pylant, he drew on the great local talent of the region, including primitive artists who offered original pottery and artwork, hand-knotted rugs, antique quilts, custom lighting fashioned from reclaimed vintage fittings, and down-to-earth fabrics.

Like the architectural and design touches, the creative roots of the Bassetts’ home are a sublime mix of history, identity, tradition, experience, and ancestry. Finding the right language—and the right team—to meld it was the key to success, Pylant says.

“A client with sophisticated tastes had a higher vision,” Pylant explains. “An architectural design team struck a balance between the vernacular and the classical. An interior designer adeptly blended antiques, art, and furnishings for an ambiance simultaneously traditional and comforting. A homebuilder drew upon the skill of inspired craftsmen, with a commitment to artistry, to quality, and to time-honored techniques. The sum of these parts is what gives the home a true sense of authenticity, of belonging, to the mountain and to an earlier time.”