Since the 1970s, when just-married Fred and Hope Angier bought and restored an 18th-century house, they have lived in and worked on good examples of New England’s early housing stock. First on Massachusetts’ Cape Cod, then in rural Maine, they found early houses in need of sensitive rebuilding, fixed them up until they were ready for new owners, and moved on to the next one. Then came a stint living aboard their 43′ sailboat—another lesson in maintaining a complex structure.

“We learned that if you want something built really well, hire a boat builder!” Fred laughs. Which is just what the couple did when they moved ashore, seduced by a surpassingly beautiful piece of land in rural Maine. They hired Stephen Florimbi of Rockport, a builder conversant with both sailing vessels and timber framing, to execute their design for a new house—one that looks old, or at least historical.

“I drew what we wanted on a piece of paper—not much better than the sketch on a napkin,” Hope says. But the house is a fine example of modern technology within traditional craftsmanship. Perched on a long hill in Hope, Maine, the house sits beside a dirt road in the traditional manner of early New England homes. The hip-roofed house was inspired by the early 19th-century frame buildings of Newburyport, Massachusetts; it has that favorite feature of coastal Federal houses, the widow’s walk. Nine-over-nine double-hung sash are set into tall, narrow windows on the side with a view. The other three sides are punctuated with two rows of three-over-three casement windows. 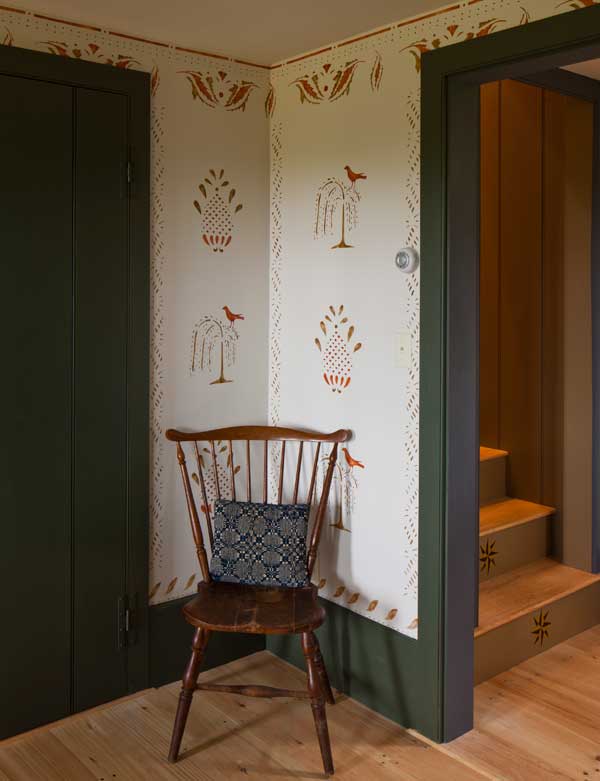 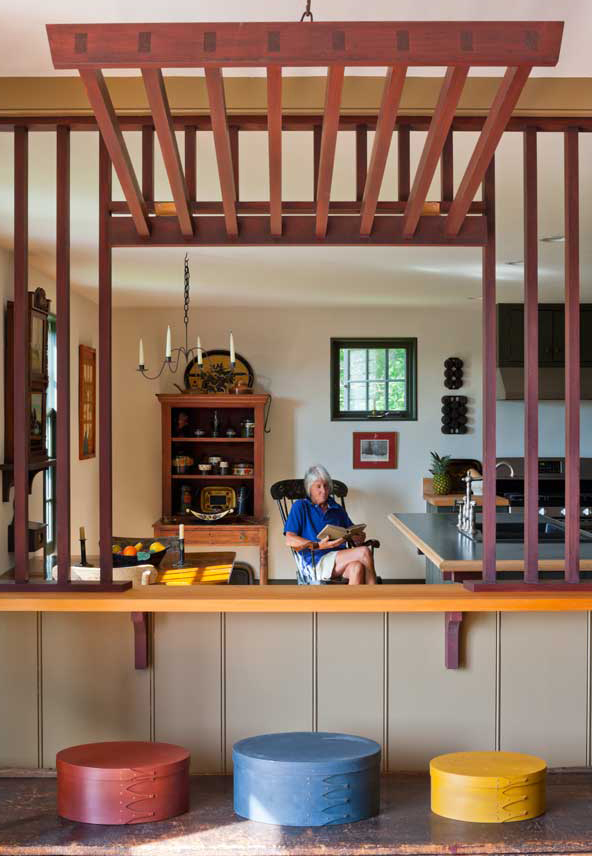 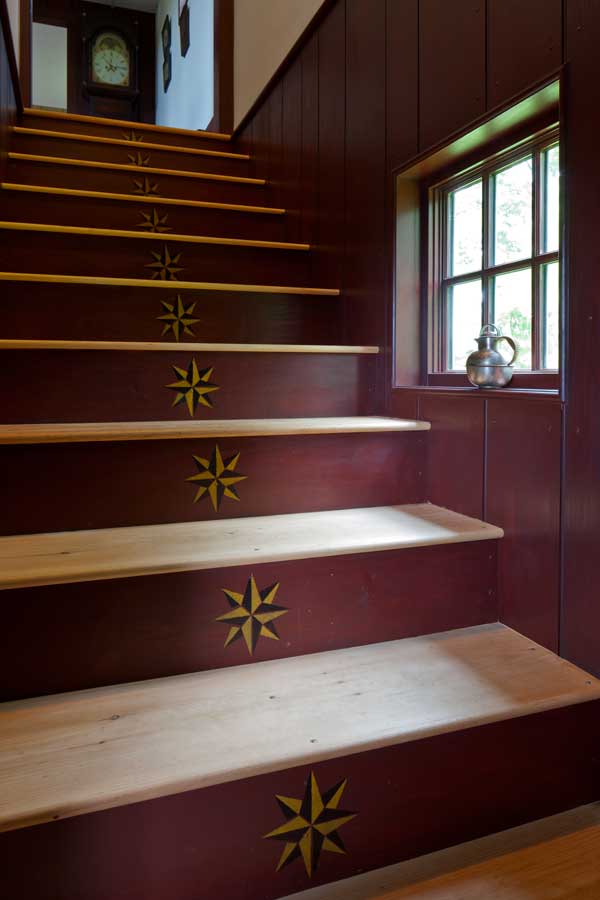 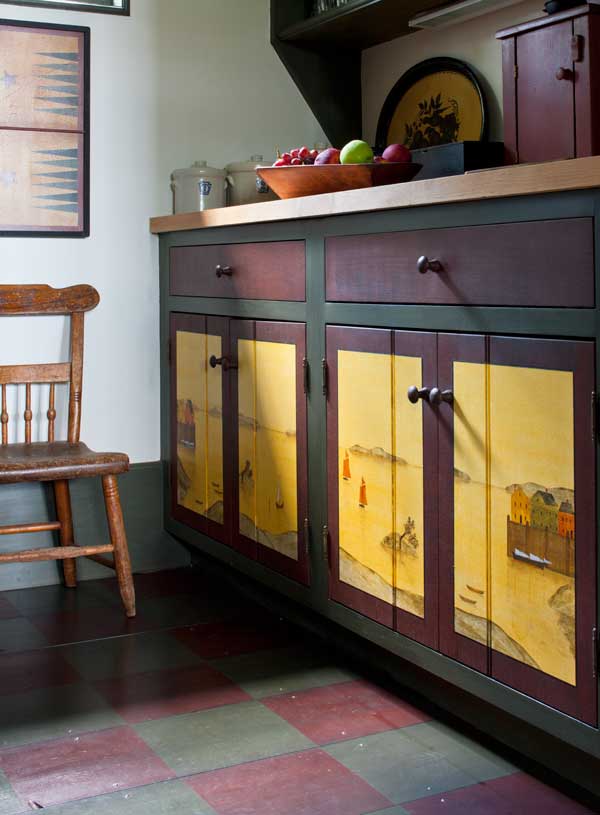 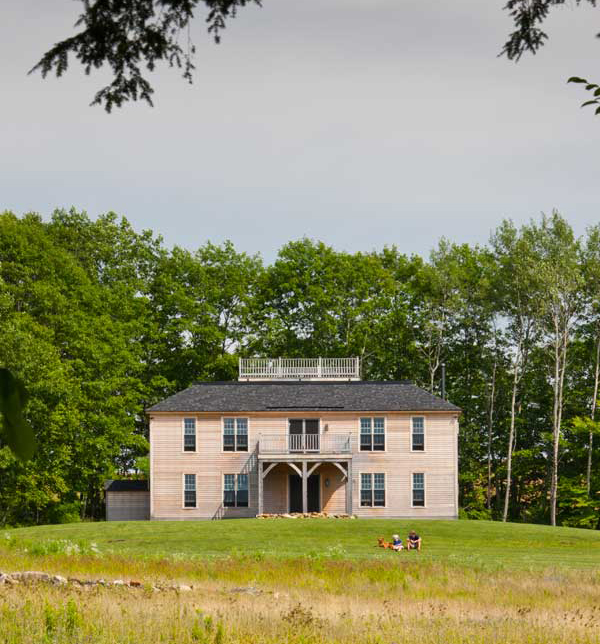 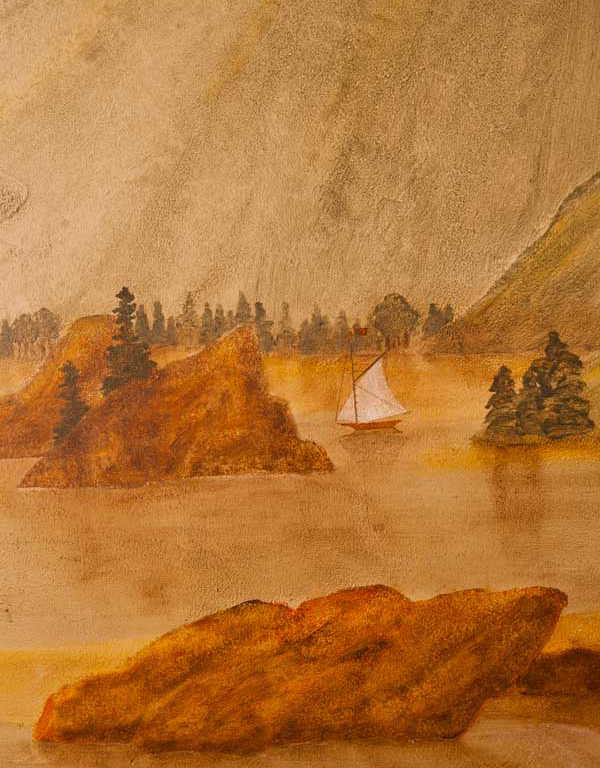 “The location and the shape of rooms inside was determined by the exterior symmetry created by the window placement,” Hope says. “We placed the living and dining rooms and the kitchen upstairs, and the three bedrooms downstairs.”

“We built this house to fit the lot,” adds Fred, as he gestures towards the panorama of wooded mountains. “Then we designed a more modern, open floor plan and an upside-down layout to take advantage of the views.”

Although the exterior recalls a 200-year-old timber-framed structure, the house was constructed with a sophisticated laminated-truss system. Cedar clapboards sheathe modern insulation; the reproduction windows are double-glazed. The interior, however, is filled with traditional details such as a bead on the random-width board sheathing, a tavern grate in the kitchen, bullnose window casings, and 10″ baseboards: “mop boards, they were called,” Hope says, “painted or stained dark so as not to show the dirt.”

The old-house character comes from the wealth of ship paintings, theorem paintings, stenciled ornament, and murals that cover softly uneven and occasionally cracked plaster walls. The house is a showcase of Hope Angier’s work—her passion since 1968, when her mother-in-law, Libby, began to teach her traditional painting techniques.

“I’ve come full circle,” Hope explains. “In 1982 I started my business with theorem paintings. Now our own home is full of them, as well as many other examples of my work.” She and her husband are both decorative painters: Hope draws, paints, and produces murals and trompe l’oeil scenes, while Fred does all the graining and glaze applications. Inspiration for their work comes from the 18th-century Maine stencil artist Moses Eaton; from Rufus Porter, who is famous for his early 19th-century murals; and from the Hudson River School of painting. But “we can work in any style,” Hope says.

“When we restored old houses, we learned quite a bit in the process,” says Fred. “For example, the most important elements, like the sills, often don’t show. It’s the decorative elements, like Hope’s work, that get people excited.”

Tools of her Trade

Hope Angier can describe the dizzying array of specialty tools available to the decorative painter. For her own work, however, she picks up brushes. “They range from a 4″ brush used to apply glazing liquid,” she says, “to teeny little brushes I use when I’m painting murals.” Hope describes cutting brushes, striping brushes, pounces (for applying gold and silver powder), and mottlers. In most of her own work, she’s learned to keep it simple.

“I do all my own designs and cut my own stencils. Then it comes down to applying paint.” She uses artists’ oil paints and alkyd glazes; under murals, she applies a base layer of eggshell latex. She and Fred have developed special techniques—like using tape to lift wet paint off murals for a textured, aged effect.

Just as she eschews too broad an assortment of tools, so does she limit her palette to the basic eight: black, white, Prussian blue, burnt sienna, yellow ocher, raw umber, permanent green, and alizarin crimson. “I can mix any color from those,” Hope says.