This isn’t the first “house project” undertaken by Dyke Messler, nor is it his last. Odd to find him settled in Maine all these 30 years, given that he was born in the Midwest and grew up in California. His grandparents’ house may have inculcated a love of architecture: It was none other than Pasadena’s Gamble House, an Arts & Crafts movement icon by famed architects Greene & Greene. Messler has, in fact, recently completed a new house after the style and magnificent woodworking of the Greenes, but adapted for Maine’s climate and contemporary life.

Very different but just as beloved is the house he’s called home since 2007, an 1809 Federal block (with various accretions). Messler says he first admired this house when he moved to the Camden–Rockport area. For 25 years he’d found a reason to drive by it during lilac season.

A local landmark, the 16-acre property in Rockport occupies a lovely spot with a view of the Camden hills. The head-turning Federal-style fence is a restoration of the one already on the property. Following clues, Messler regraded the lawn in front of the house; granite plinth blocks replace old ones since moved or lost, and once again the picket fence sections step down the grade. The arbor, found attached to the front door, was relocated more appropriately on the fence and has been restored. Nearby, 47 new apple trees joined some transplants to create an orchard. 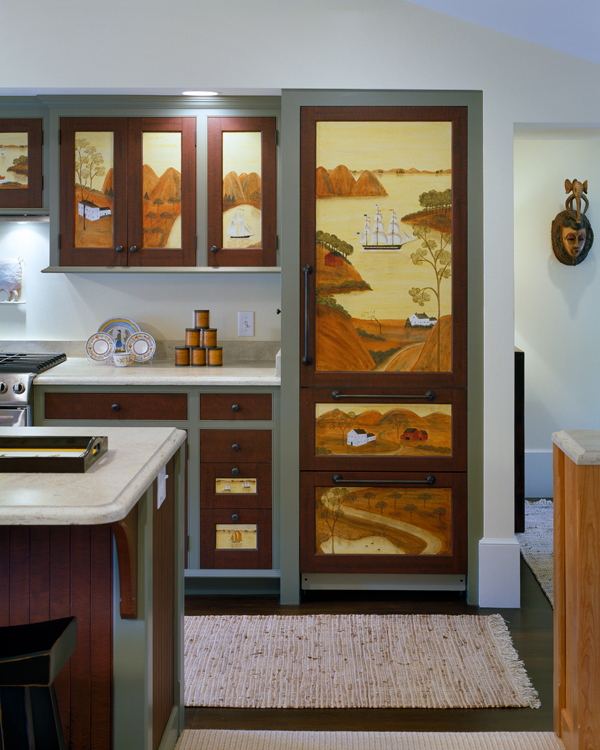 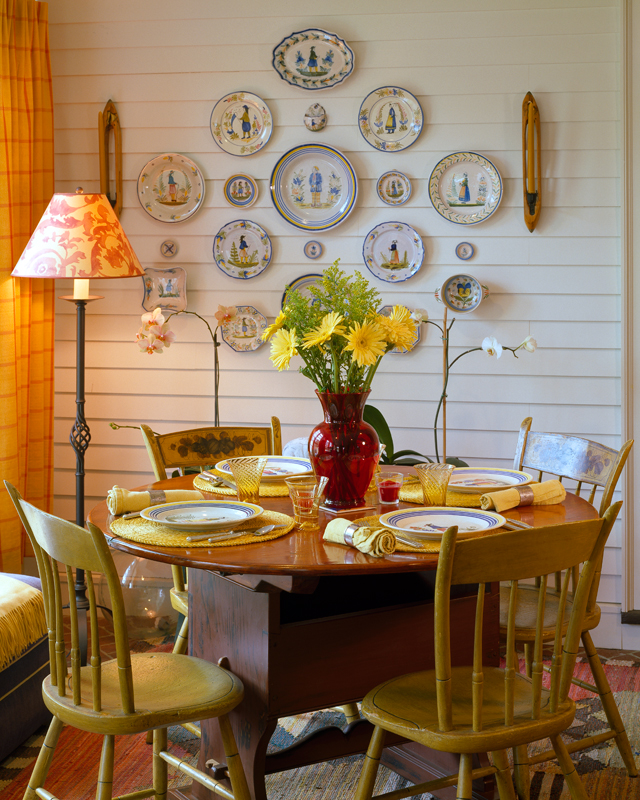 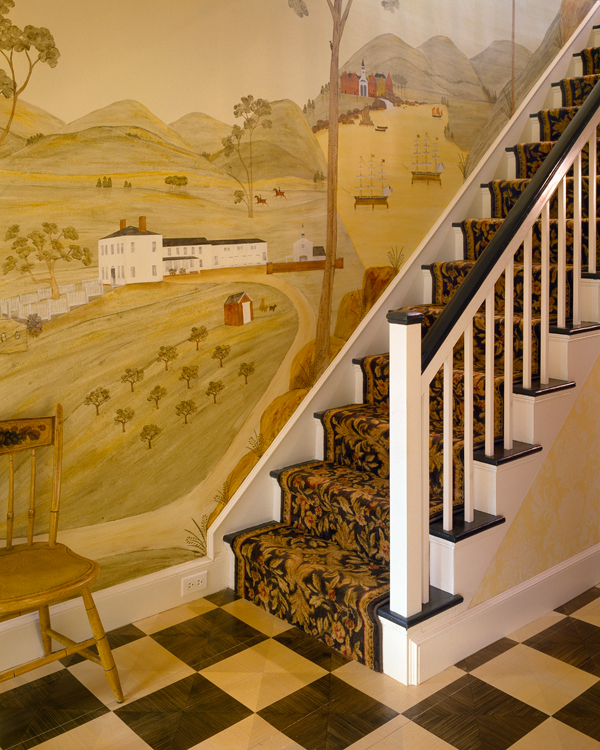 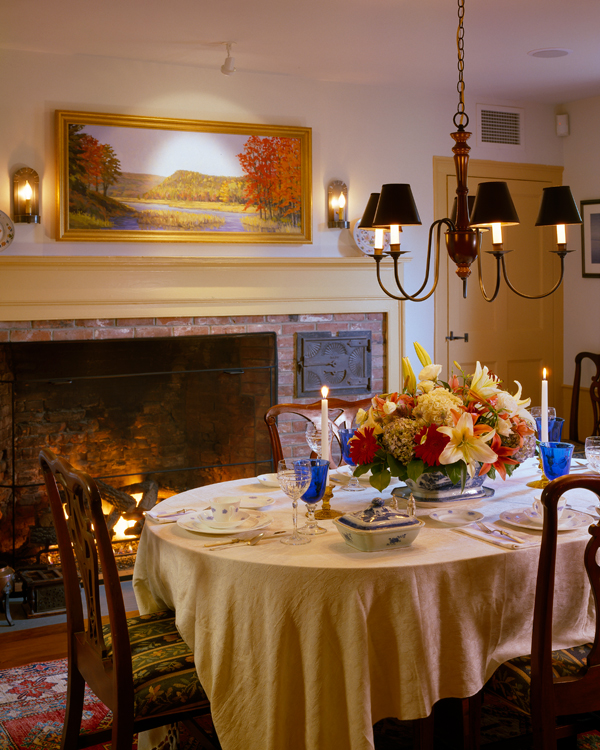 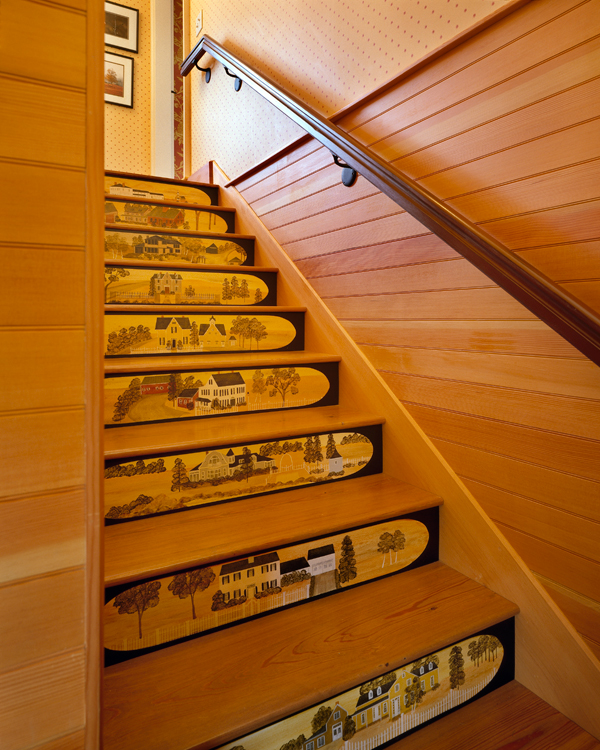 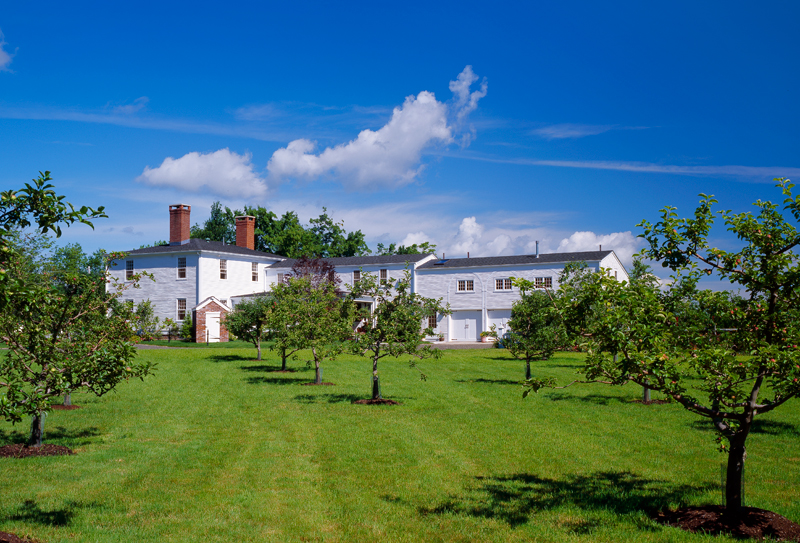 Messler restored the venerable house, and also gutted and renovated 20th-century additions, including the kitchen ell, a mudroom connector, and a two-story garage. The footprint and roof-lines remain essentially as they were throughout the 20th century. The old library wing was turned 90 degrees to face the new pool, and its design updated with a covered veranda and jaunty new windows.

The 200-year-old house was in fairly good condition; its longtime owners, the Sexton family, had kept it in repair. (Dyke Messler is only its fourth owner in more than two centuries.) There were some predictable foundation problems; mid-house jacking addressed settlement and sags. Head casings on interior doors were reinstalled approximately level, and the doors rehung.

Good preservation practice extended to window repair. The original block has 26 windows with a 12-over-12 configuration. All 52 sashes were meticulously restored, reglazed, stripped, and painted, with old glass replacing any modern lights. Lead counterweights were rehung. All the old door hardware was removed, stripped, and waxed before being reinstalled.

In all but the dining room, the old house’s original pine floors were salvageable; those that had been painted were stripped, stained, and refinished. In the dining room and new kitchen, flooring is reclaimed Eastern white pine from Carlisle. The mudroom has Carlisle’s “Grandpa’s Floor” of antique heart pine. A local artist faux-painted the hall floor in a checkerboard pattern. The firebox in what’s now the dining room was restored to its original width, uncovering the old bricks. Upstairs, a few doorways were reconfigured to improve circulation, particularly in the master bedroom and bath.

The kitchen in the renovated addition is frankly contemporary, albeit traditional with pine flooring and folk rugs, classic cabinet details, Windsor chairs, and granite countertops. A swinging door separates it from the dining room, which is in the original Federal-era block.

Rooms inside are eclectically furnished, befitting a house with this much history and an owner with far-ranging interests. Dyke Messler purchased some pieces from the last owners’ auction, returning them to the house. Antiques can be found in every room. Other furnishings and objects are from Messler’s collections, which include American pieces from early New England antiques to those by Greene & Greene, as well as Asian art.

Dyke Messler was one of the founders of Phi Home Designs in Rockport, Maine; his former partner, Michael Roy, is the company’s president. “Phi provided design services,” Roy says, “working with Dyke on the renovations to the kitchen, mudroom, master bath, and so on. We were general contractors for all the work.” Phi also built the kitchen cabinets and period-reproduction furniture.

“I love Federal houses for their beautifully proportioned rooms,” says Messler. “I’ve restored more than a dozen houses in New England over almost 40 years, and this one is probably my favorite.”