Did you know that William Morris eschewed friezes? He considered the wall division superfluous and recommended papering right up to the ceiling. Be that as it may, chances are good that you have rooms with friezes if you live in a house built between 1850 and 1940.

In classical architecture, the frieze is defined as the space between the architrave and cornice. (In 1812, the British removed the Elgin Marbles, the Parthenon’s world-famous frieze, to display it in the British Museum.) The decorated interior frieze came into its own during the reign of Queen Victoria. The era’s ceilings were typically high, 9′ or more, and a divided wall balances the room’s proportions, bringing the eye down from the ceiling. The frieze was considered (except, apparently, by Morris) an integral part of the room’s overall finish.

The area below the ceiling and above the picture rail was often treated differently from the lower wall: covered with embossed materials like Lincrusta, Anaglypta, tin, or leather; hand-painted, stenciled, bordered, or striped; embellished with compo ornament or even with finely detailed plasterwork. Mottos and quotations were favored in dining rooms and libraries (in my own Victorian parlor, may the hinges of friendship never rust is hand-painted in the frieze). 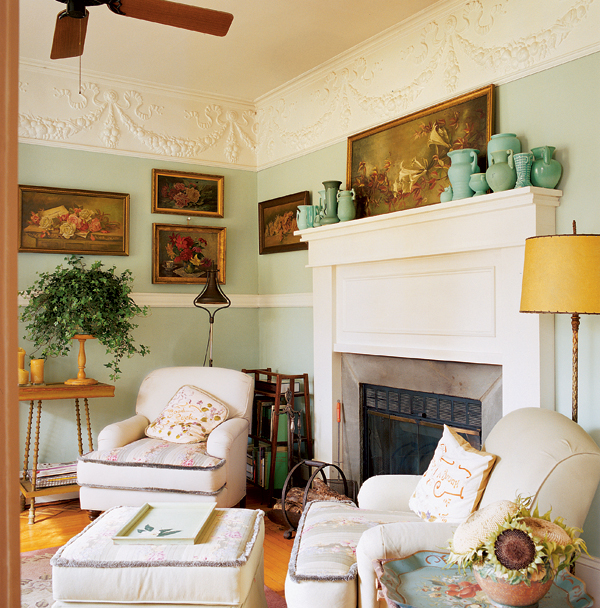 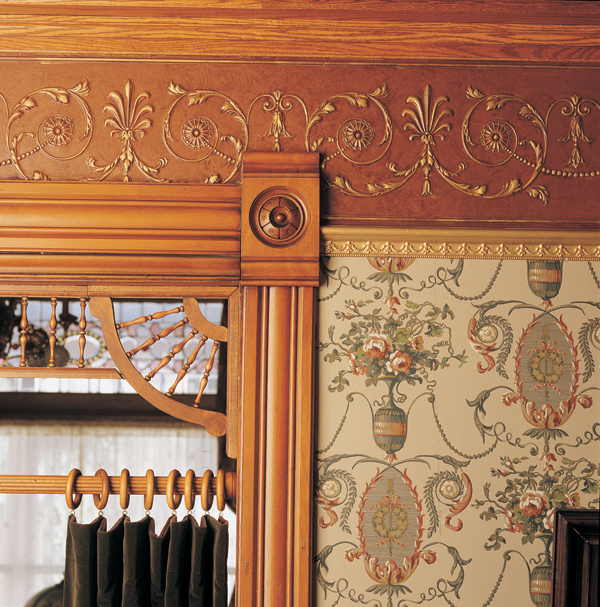 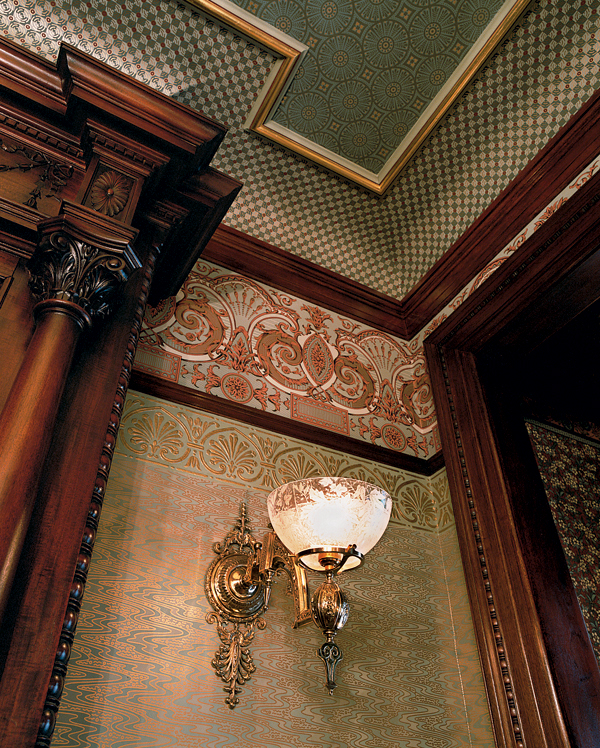 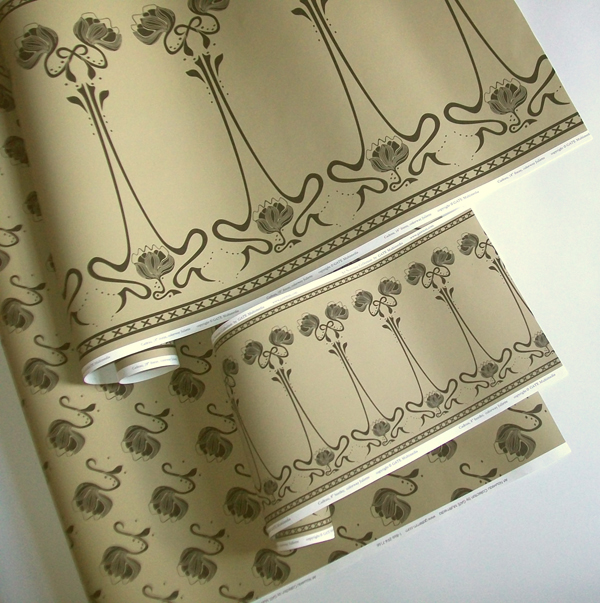 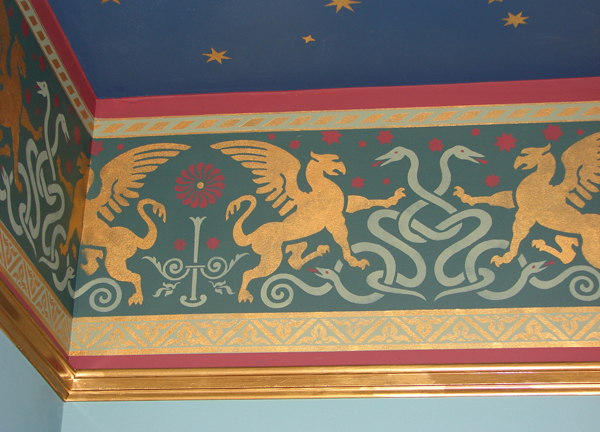 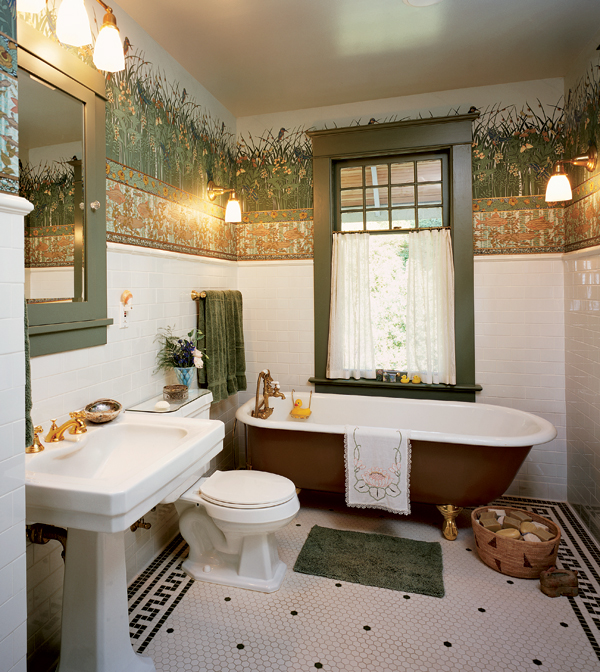 The lowered ceilings and simpler treatments of the Arts & Crafts period did not abolish the frieze. Rather, it was often a deeper section of upper wall surmounting a high wainscot and plate rail. In rooms without a wainscot, the frieze survived as a band above the picture rail, with a single wall fill treatment below. By now the frieze was often the dominant decoration in the room, with painted walls below and little ceiling ornamentation.

Companies selling period-inspired wallpaper friezes offer excellent information on their websites. We asked some of them to offer introductory advice:

Be sure to scale your frieze appropriately to the room. Most Victorian friezes were about 18″ deep; by the turn of the 20th century, they became narrower as ceiling heights were lowered toward 8′. On the other hand, the frieze area over a high wainscot as seen in Arts & Crafts and Tudor Revival rooms could be up to 27″ deep. Don’t be constrained, however, by the stated depth of a printed frieze. Makers of roomset wallpaper offer borders and bands that can be added (or trimmed away) to adjust the depth. You also can use paint to create borders or striped bands.

In Victorian schemes, colors typically became lighter as they moved up the wall. The lower section, or dado, was darker to hide dirt and scuff marks; the wall fill was a shade or two lighter; near the ceiling, the frieze might be lighter still. But the frieze was often done in a brilliant or rich-hued color as a transition to the ceiling. If you paint the walls under the frieze, don’t exactly match the background color of the frieze. As long as the tone balance is considered, don’t be afraid of a contrasting scheme, with colors taken from opposite sides of the color wheel. For example, a burnished gold wall fill with a peacock-blue frieze can be spectacular.

With all the natural-finish wood-work in Arts & Crafts houses, dominant colors in the frieze moved toward warm and earthy tones, with dull greens, browns, deep gray-blues, russet, and gold all popular.

The frieze’s design or motif is cued by the style of the house. Exotic influences became popular as the Aesthetic Movement took hold during the 1870s. Christopher Dresser designed whimsical friezes with cavorting frogs or mice, playing on Darwin’s theory of evolution. Elaborate designs influenced by classical French and Italian motifs were favored in uptown Victorian parlors.

Decorated friezes in the Arts & Crafts era brought nature indoors with vines and abstract floral designs, idyllic woodland scenes, animals, and sea motifs. A plain painted frieze, often in the same off-white color of the ceiling, was popular in bedrooms and in Colonial Revival treatments.

Wayne Mason points out that calculating how much paper you need for a frieze is a relatively straightforward, linear measurement. Frieze papers are printed as such, at a preset depth, so you just need the sum of the length of all the walls in the room. Convert the linear feet into yards, which is how most papers are sold. Order about 15 percent extra for matching the repeat, and for mistakes and future repairs.

First find the focal point, the obvious place your eye goes when entering the room; often it’s a fireplace or the wall opposite the room entry. If the frieze pattern has a central or strong repeating element, position it in the center of the focus wall. Remember to check if the pattern has an up or down orientation, and communicate that to the paperhanger.

Next determine the “kill point,” the paperhanger’s term for where the end meets the beginning of the frieze. Usually the pattern’s repeat will not match up precisely. So the kill point is placed opposite from the focal point, in an inside corner rather than an outside one to downplay the mismatch. Try trimming the frieze following the outline of the pattern so that it overlaps slightly, which makes the transition less obvious. A shorter repeat in general works better in a smaller room or one broken up by many windows and doors; also consider a landscape frieze.

One more tip from Carol Mead: Locate the lowest point of the ceiling. Most old houses have settled, and ceilings are not level. Start the level line for the frieze at the lowest point and ensure there is enough room in the height of the paper to fill in the extra space. In her freizes, Carol likes to add at least an extra inch of colored ground beyond the top of the printed paper. If the ceiling is very out of level, avoid a top stripe and chose an undulating pattern to help hide unevenness.

Thank you to the pros who provided information for this article: