The first suspended light fixtures undoubtedly appeared in the vast spaces of European castles and cathedrals. Given the absence of such grandeur in colonial America, chandeliers were rare before the Revolutionary War. The earliest were imported in the mid- to late 18th century to light meetinghouses or the ballrooms in governor’s mansions. Generally, there were no “fixtures”: Candlesticks, lamps, and sconces moved from room to room.

Because sheet metal was scarce, most early American chandeliers were fashioned out of lathe-turned wood or metal with wire arms. Other forms—almost all imported—included blown-glass inverted bell or globe-shaped pendants and, rarely, chandeliers with brass bodies and curved arms. A few exquisite pieces were coated with silver or embellished with crystals. 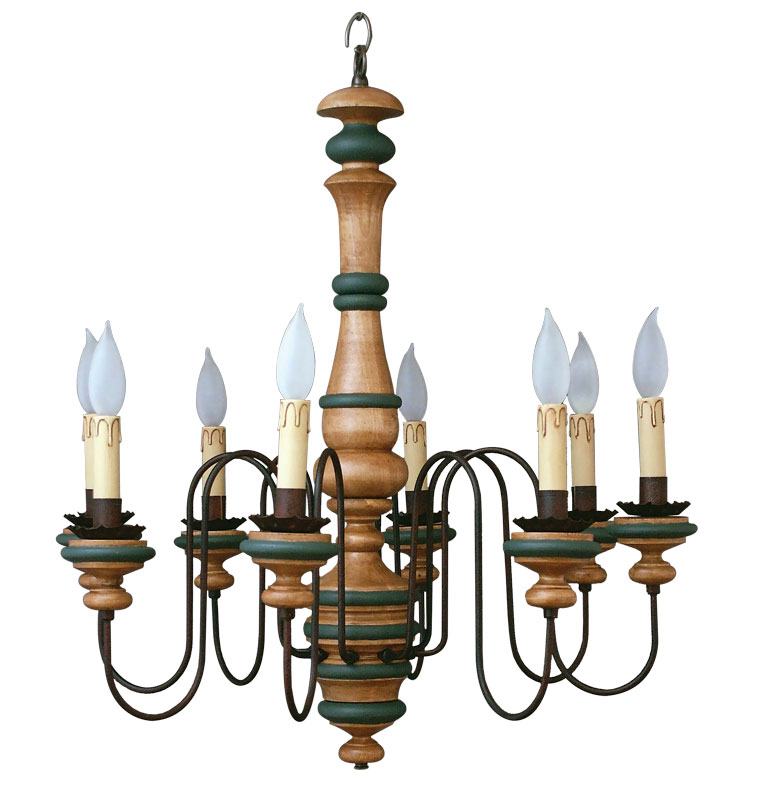 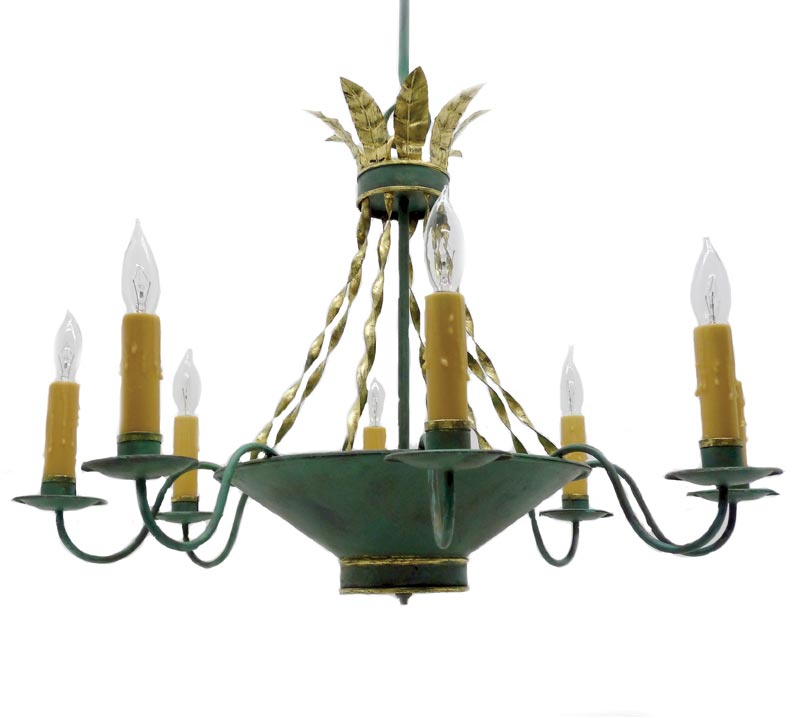 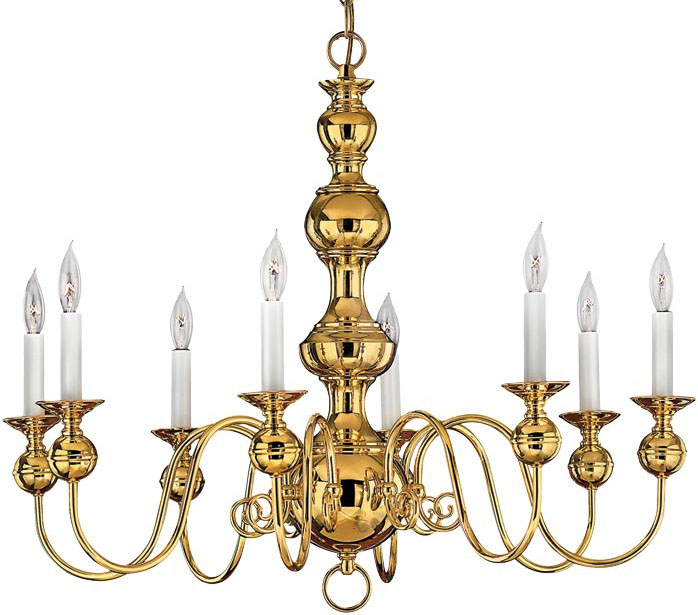 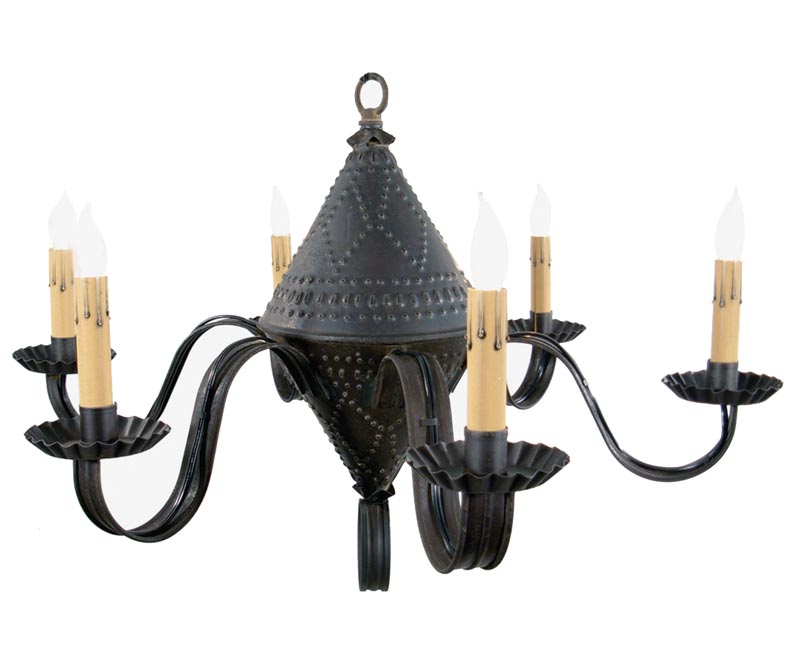 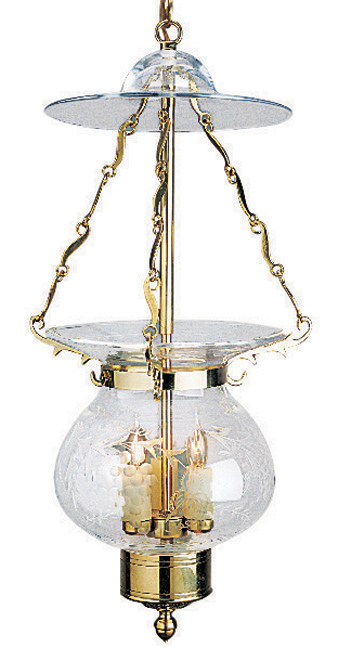 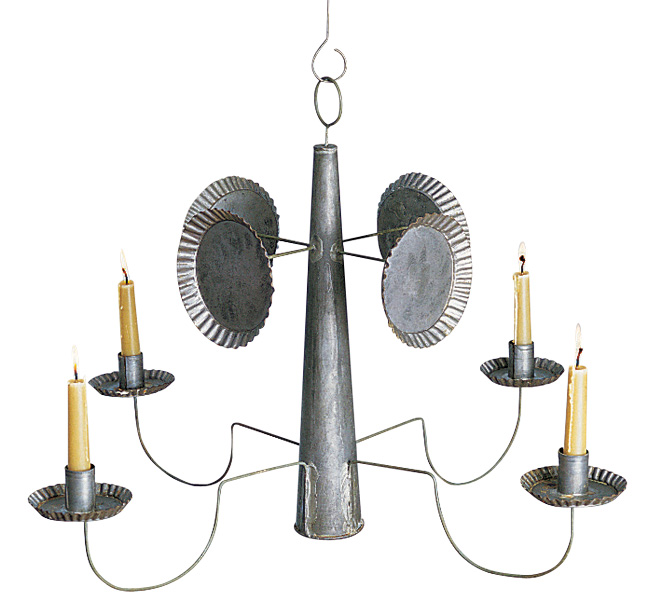 Armed chandeliers of either wood or metal could hold six or even eight candles in a single tier, and up to three times as many in double or triple-tiered versions. “Fixed” chandeliers were suspended by hook from an overhead beam; there were no wires to conceal.

Metal chandeliers crafted out of thin sheets of tin- or pewter-coated iron (or terne) range from crudely made to the highest level of craftsmanship. The central body shape varied—the only limitations were the material itself and the skill of the tinsmith or blacksmith. Shapes included round or tapering cylinders, “witch’s hat” inverted cones and conjoined double cones (squat or elongated), and inverted bowls.

Wood centers took their cues from the cabinetmaker’s craft—think sculptured bedposts, finished with round, acorn, or tapered finial shapes. Forms vary from simple globes to elongated bowling pins. Often, but not always, the greatest part of the mass appeared at roughly the same level as the arms and candles, as though the lamp were branching out like the crown of a tree. Strong S-shapes might hold the candles close to the body; gradual curving arcs produced a light and airy fixture. Flat, curved strip arms came later.

Authentic reproductions of wood and terne chandeliers should suggest a hand-worked appearance. For instance, wire arms should be shaped over a form that matches the arm profile of an authentic fixture. Candle mounts and drip catchers should vary slightly in appearance, to differentiate them from parts stamped or cut by machine.

While many reproductions skew toward rustic metal finishes and punchwork, quite a few colonial and Federal-era designs were actually painted. The late 18th through early 19th centuries witnessed the flowering of toleware, or tinware decorated with fanciful painted details. Typically, bright colors and even gilding adorned the fanciest metal chandeliers. Some makers use natural oil pigments or casein rather than paint for the sake of authenticity.

The first “attached” chandelier in late 18th- and early 19th-century homes may have been the hurricane lantern—a blown-glass globe, onion, or bell-shaped pendant, so named because it wouldn’t blow out in a heavy wind. Some were equipped with a glass smoke bell to keep soot from darkening the ceiling (a problem with most candle-lit chandeliers even now). Most were fitted with one, two, or three candles, a pattern retained in today’s electrified versions. Another medieval form, the hexagonal glass lantern, is a variant of the hurricane hall pendant.

The brass curved-arm chandelier became the popular reproduction in the Colonial Revival era. The most familiar profiles are actually Flemish by way of England. Despite its scarcity in colonial times, the brass chandelier’s popularity in the centuries since make it a classic choice for any colonial-inspired interior.