The time has come to paint your rooms, and you want an authentic early American look. Yet the tried-and-true effect of using whitewash-white with a deep trim color feels too minimal for your taste. An adaptable, affordable option: stenciled walls.

Stenciling—repeated decoration created by applying paint through a cut-out pattern—is an ancient technique. In the years following the Revolutionary War, it took on new life as a genuine American folk art form, and many of the best designs from the early republic are easily attainable today.

The first professional stencilers were itinerant artists with personalized stencil collections drawn from sources as various as contemporary wallpaper patterns, classical motifs like the inlays found on furniture, and folk art—all of which were frequently crossbred with forms from nature. Among the most famous artists are Moses Eaton and his son, Moses Eaton, Jr.; many of the early artists remain unknown. Researchers have found design samplers stenciled in inconspicuous places like attic walls or the backs of closets, suggesting that homeowners chose and customized their own designs from the artist’s repertoire.

So how to select a stencil pattern for your home? Surely what’s appropriate for a vernacular farmhouse would be different from the choice for a formal Federal townhouse? Ann Eckert Brown, who spent a quarter century traveling the country doing research for her seminal book, American Wall Stenciling 1790-1840, has identified two major American styles of stenciling. The first is folk, influenced by the primitive or vernacular “folk art” of the painter’s culture. The second style is based on classical motifs. 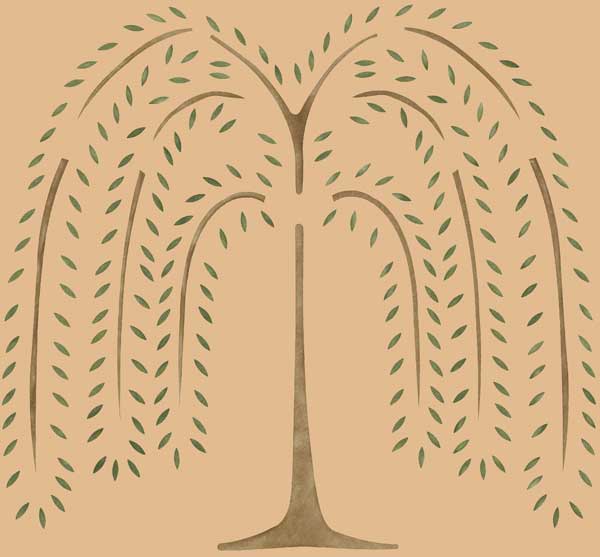 The most popular layout for folk stenciling mimicked wallpaper placement. A horizontal border was stenciled on the walls at frieze, chair rail, and mopboard levels. Narrow vertical borders (perhaps a vine and flowers, or diagonal leaves) divided the walls into panels, which then sported those central geometric or floral patterns. A second, less popular layout saw the narrow vertical borders stenciled around windows, doors, and mantels and along the corners of rooms. Inside this stencil frame, walls were filled with alternating central images, such as a basket of flowers.

Classical stenciling, on the other hand, was part and parcel of America’s post-Revolutionary love affair with neoclassical designs. Not surprisingly, it shared the same design imagery found in both furniture and architecture: swags, bellflowers, urns, reeding and fluting, shields, and fans. The designs were smaller and more refined than those of folk stenciling. Unlike folk stenciling’s more-is-better attitude, classical stenciling confined itself to the frieze or a wall’s borders. While classical stenciling may sound staid, the restrained effect is very charming.

Although today we may associate stenciling with “country” décor or baby nurseries, early designs were bold and stylized, never saccharine. In both folk and classical stenciling, hues were undeniably intense. The most common color scheme was red and green stenciling on white or dove-gray walls. Other background colors included bright yellow, yellow ochre, light red, raspberry, salmon, and later, blues.

Even among the documented color schemes, there are indications that some homeowners consulted their own tastes. Eckert Brown found one home with small flower sprays and diamonds done in shades of blue, green, yellow, and red on an indeterminate background. In a different house she found the same pattern in dark gray on a white background—a departure from then-popular trends. Be assured that historical colors that also suit your own preferences will likely achieve a harmonious period feel.

Classical stenciling waned in the 1830s; folk stenciling was fashionable through the 1840s. Ann Eckert Brown points to plenty of exceptions to the rule that classical = urban and formal, while folk = rural and vernacular. Whatever you choose, stenciling is a very good way to add color and suggest history.

How to paint your own stencil design

With bright colors and familiar motifs like pinwheels and pineapples, early American stenciling is easy to learn and practice. The medium itself is user-friendly: Itinerant artists worked in distemper (an earth pigment paint) and whitewash. Today, most stencil paints are colorfast acrylics or the finely ground, flat-paste Japan paints that closely match the color and consistency of the original distemper.

At its simplest, stenciling is a matter of applying paint through a template with a cut-out pattern, usually made of Mylar or another plastic. If you are using more than one stencil template, Polly Forcier of MB Historic Décor suggests the following trick: Place the second template over the first and align it with the registration holes. With an indelible pen, trace the outline of an outer shape from the first template onto the second one. This will make it easier to apply the second color than if you simply use the registers.

Apply your paints in a thin coat, using a very dry brush, with no shading. Start at the edges of the stencil form and move in toward the middle of the openings. Constantly rotate your hand in either a clockwise or counter-clockwise motion, keeping the bristles of the brush perpendicular to the wall.

Catherine Lundie is a happily incurable old house addict. Lundie is the editor of Restless Spirits: Ghost Stories by American Women, 1872–1926. She holds a PhD in English with a specialization in 19th Century American culture and literature.