From the mid-1600s to the mid-1800s, paint was the humble medium of choice for embellishing furniture. Painted furniture was not just a country or folk art phenomenon, but was also de rigueur in fashionable urban homes. A new finish could disguise inferior woods, visually unify objects made of varied woods, and update out-of-style pieces. Paint was applied as a single color—or manipulated to imitate marble; mimic mahogany, cedar, or rosewood; depict landscapes and industrial scenes; or represent floral, swag, and other decorative motifs. These treatments enlivened country tables, cupboards, and blanket chests, highboys and secretaries, sewing tables, and Windsor and Hitchcock chairs.

In the 17th century, white, black, and red paint on William & Mary chests, presses, and court cupboards emphasized and imitated details such as applied moldings and columns. These colors—from earth minerals, including iron oxides, and lead—remained popular through the 1700s, in part because the pigments were inexpensive and easy to obtain. Only the well-to-do could afford costly blue and green pigments.

Early books on painting furniture included instructions for tortoise-shell, marbleizing, and grain painting, which remained popular through the balance of the 19th century. All paints were mixed on site: pre-mixed paints were not commercially available until the 1860s. Oil, particularly linseed oil, was practically the unanimous choice for painting furniture. Casein, or milk paint, was not used as an architectural paint in America until after 1800, and was not used as a furniture paint until much later in that century. 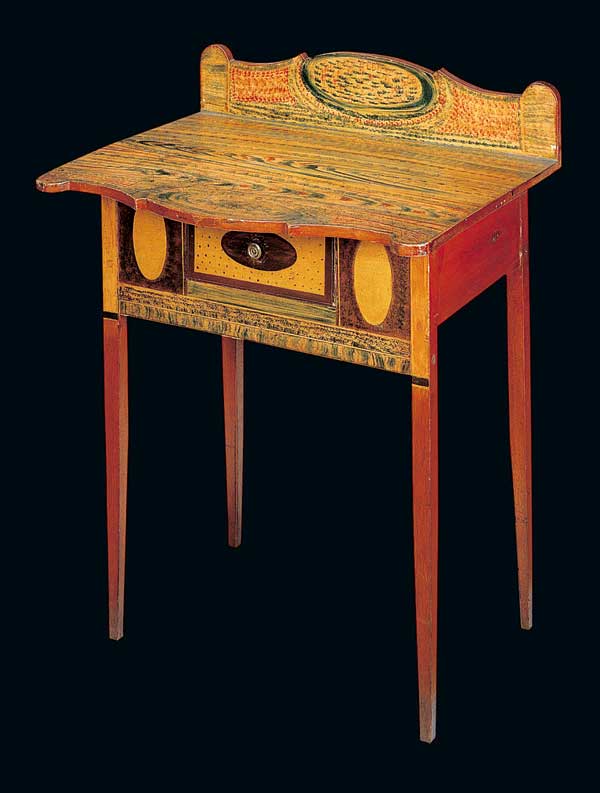 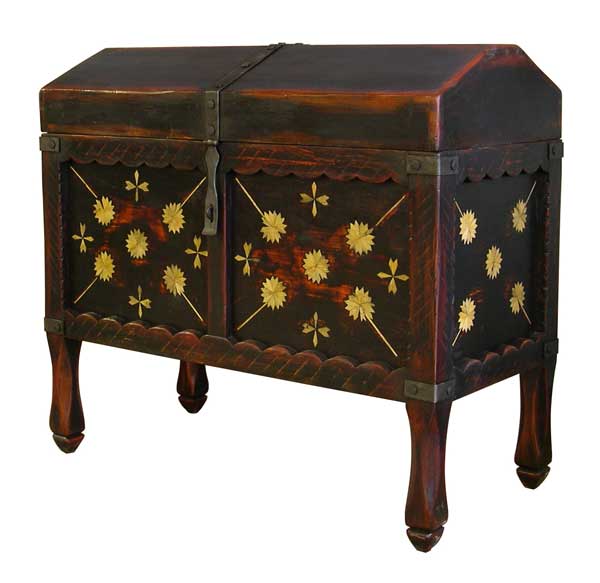 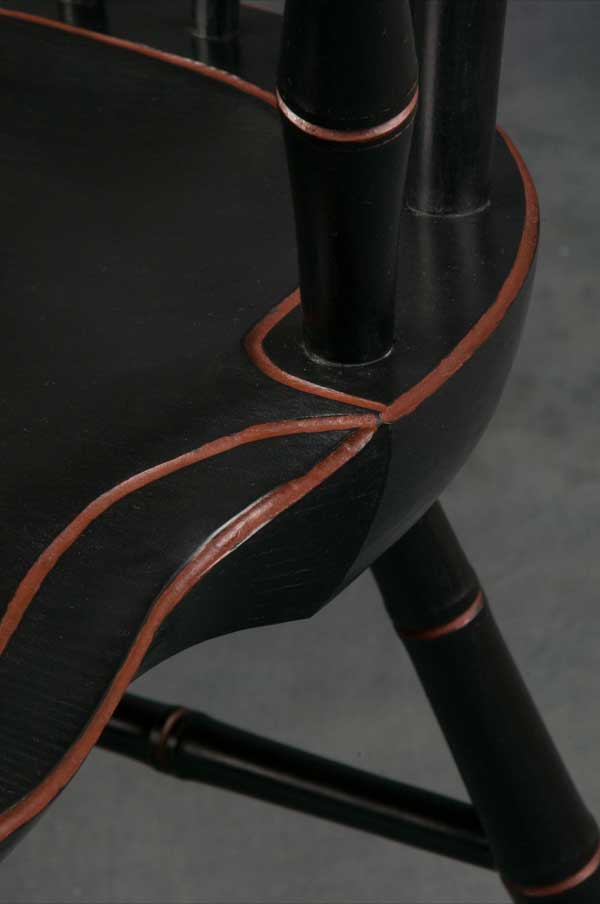 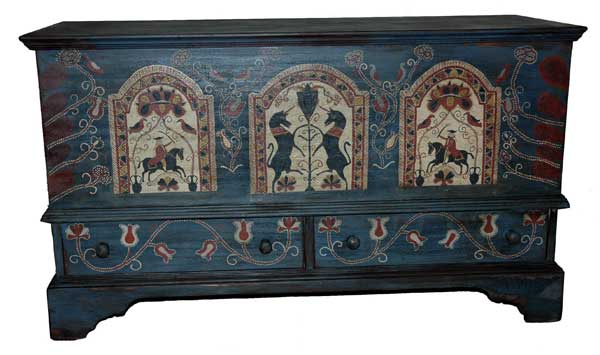 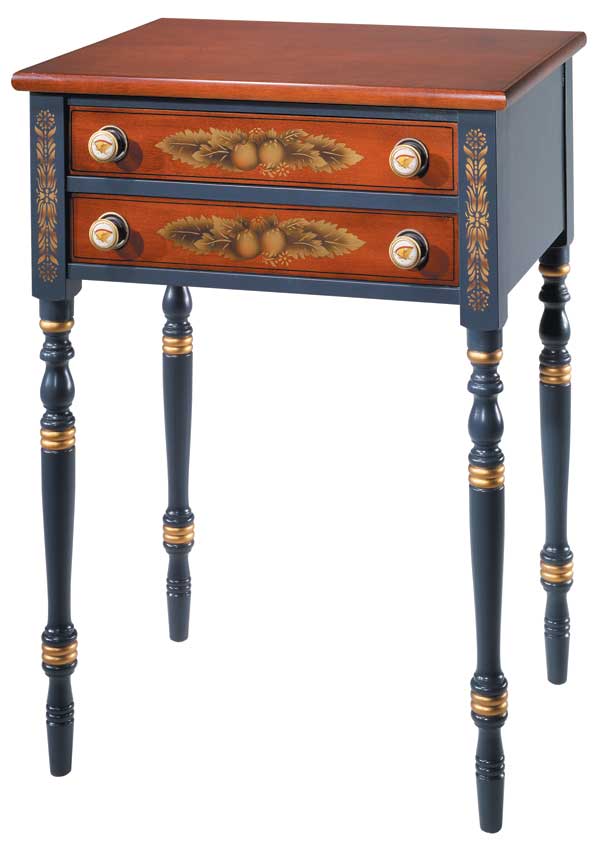 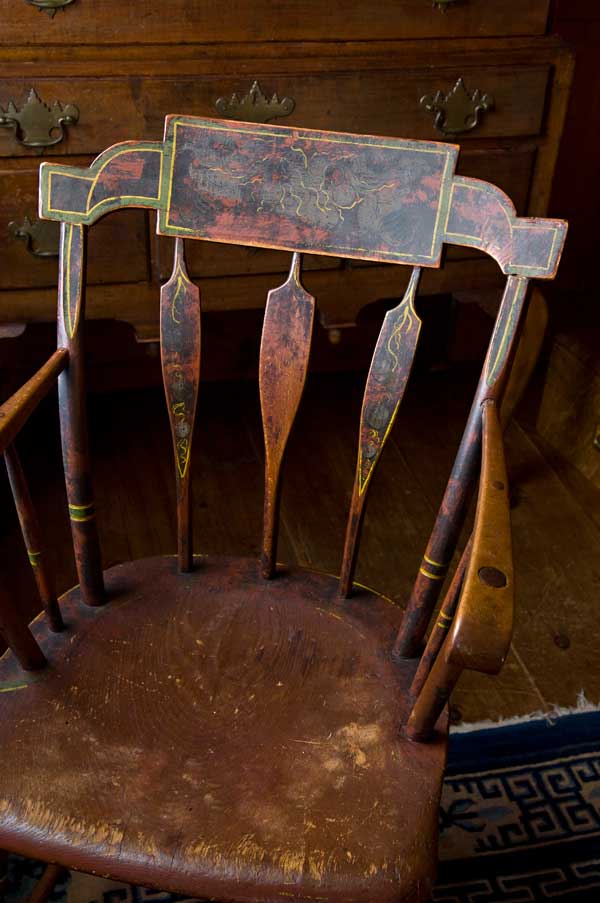 Distinctive local styles of painted furniture were largely a matter of preferences colonists remembered from their homelands. The Dutch in New York’s Hudson Valley decorated their kas cupboards and bun-foot blanket chests with black, gray, and white grisaille garlands of fruit and flowers. Pennsylvania Germans favored multi-colored stars, pinwheels, birds, tulips, and other fanciful designs, which shared decorative motifs with other folk art forms, such as fraktur. And New England residents of English heritage had an enduring preference for marbling, graining, even spotted decoration.

By the mid-1700s, urban furniture decorators had developed specialties in gilding and japanning (Oriental scenes and motifs executed in gilt, usually on a black or red background), while decorators in more rural areas indulged in treatments that referenced expensive woods and marble.

As John Kirk explains in American Furniture, maple “was normally painted or stained until about 1780, when light woods became part of the neoclassical taste for bright surfaces.” Mustard, salmon, white, red, and green were also used as base colors, and rush seats were often painted.

In the first part of the 19th century, “trompe l’oeil treatments became preferable to the very woods they imitated,” says Stacy Hollander of the American Folk Art Museum. “With the introduction of the Empire style . . . rosewood became the dominant wood grain, the rich black and red striations providing a handsome background for archaeologically inspired motifs applied in gold leaf or metallic stenciling.” Even the use of simple black over red, applied by sponging and executed freehand with a tiny brush known as a pencil, could create stunning imitations of knotted and burled wood. In the 18th century, imitations of wood grain and marble were delightfully abstract; after 1800, they became more realistic.

Between 1790 and 1840, Americans expressed their exuberant new worldview in a new style—called “Fancy”—that came to be a synonym for “imagination.” Fancy painted furniture was part of a much larger design movement that began in Europe. Interior architectural details were emphasized with brilliant color, gilding, marbling, and graining. In 1816, the invention of the kaleidoscope was a visual supernova, making it possible for people to see color and pattern as they never had before. It had a profound influence on design. The Fancy movement inspired imaginative graining, smoke decoration, and lyrical “seaweed” designs.

In 1818, Lambert Hitchcock’s Connecticut factory began assembling chairs of mass-produced parts, painting them in black and decorating them with stenciled motifs in distinctive bronze gilt. “Hitchcock’s marketing strategy—labeling the back of the chairs with his name and marking them ‘warranted’—was so successful that even today his name is identified with this type of chair,” Hollander says.

After falling out of fashion about 1840, the painted furniture tradition persisted until about 1880. Not long after, during the Colonial Revival, paint-decorated furniture began to be appreciated by a small group of collectors, whose insight and foresight preserved the glorious finishes that are increasingly valued today.