The fireplace, like the staircase, is a focal point and key element of style. Its design is a clue to the intentions of the builder: Does your house lean toward Greek Revival (simple post-and-beam mantelpiece), late Victorian (lustrous tiles or an oak overmantel), Craftsman (beveled mirror and ochre art tiles), or Colonial Revival (white paint and swags)? If it’s as obvious as those examples, decorating will be easy!

Choose period- and style-appropriate hearth accessories and displays to further the point. If, on the other hand, your fireplaces are plain and mundane, you can use accessories and objects to add a style vocabulary to rooms.

Though decorating is personal and may be spare or eclectic, a nod to period style plays up a house’s best features. For Federal homes (ca. 1789–1840), consider heavy brass candlesticks, Chinese Export china, and an oil portrait. Mid-Victorian arrangements (ca. 1850–1875) are eclectic, with a lot of stuff: gilded clocks, Minton vases, figural candlesticks, fairy lamps with art-glass shades, butterflies under glass. The mantel was often draped in fabric.

By the Arts & Crafts period (ca. 1895– 1925), less ostentatious displays were built around quality and meaning, rather than quantity. An English painted platter, turquoise pottery, artful little books, and copper objects were common collectibles on display. Certain conventions can be found in every period. These include candelabra at each end or flanking sconces on the wall, a clock, small objects that carry a theme, and a medium to large work of art centered on the wall above the mantel.

On a more practical concern: Old fireplaces allow heated air to go up the chimney, even actively drawing air out of the interior. Their efficiency can be improved by the use of a damper (at the throat above the firebox, or near the top of the chimney), by covering the firebox during cold weather, or by retro-fitting the firebox with a stove or modern insert that vents into the chimney flue.

By the way, if your house has a mantel but no real firebox, it may have been built with coal-gas heat. Wood-burning fireplaces lost appeal in the late 19th century, but not so the symbolic importance of the fireplace, so a traditional-looking fireplace often was built as a surround for a modern heat source. A cast-iron unit for gas heat reproduced the look of register grates, which already had made wood fireplaces more efficient; the gas fire contained a heating element that imitated the look of glowing coals. Coal-gas companies piped gas into houses; some houses had a coal furnace in the basement to provide the coal gas. Other faux fireplaces contained a furnace register.

BETTER OUTPUT
Fireplace stoves, coal grates, and efficient inserts go back a century or two. You can keep the look and feel of a hearth without the hassles and polluting particulates of open wood burning, whether the fireplace is new or old.

Inserts fit in small or shallow fireboxes. Gas or electric, they may be purely decorative or produce heat. Some are like the complete firebox outfits sold in the 19th century, others more like the Franklin stove (invented in 1842). Some mimic English coal grates—brass or cast iron baskets set with glowing “coals” or “logs” fired by gas or propane (vented through a wood-burning flue), or electricity. Ceramic-fiber “logs” have been around for a century; with a gas flame, the effect is close to a real wood-burning fireplace.

MANTELSCAPES
Bring out the inherent (or preferred) style of your house with a well-dressed mantel and hearth.

The Mantel Shelf Early on, a display of imported china and glass telegraphed wealth and worldliness. Consider travel photos in frames; pottery; candlesticks; vases with or without flowers; leather-bound books; framed art tile; antique ceramics; collectibles such as boxes, glassware, silver and pewter; small statues; even finds from nature—a bird’s nest, a branch or driftwood, pinecones, seashells. Choose a theme, and do “clutter” only if your house is Victorian.

The arrangement itself helps define your style. Colonial Revival displays are symmetrical, sometimes obsessively so. Arts & Crafts arrangements also may use symmetry, but often have an unstudied feeling with asymmetrical placement of objects, balanced by height or volume.

Over the Mantel Traditional options for the wall over the mantel include artwork, a mirror, taxidermy, or a textile. In the first quarter of the 20th century, art was often a plein-air or landscape painting, a portrait, or such period favorites as Edward Curtis prints of Native Americans. When a mirror was used, often it was beveled glass set into mouldings over the hearth, rather than a florid piece hung on the wall as in previous periods.

Finish the look: So many offerings are out there, from hand-forged tools to Art Nouveau screens. Generally, brass looks better in classical Colonial Revival and formal Victorian homes, while iron blends with rustic, Craftsman, and Spanish interiors. 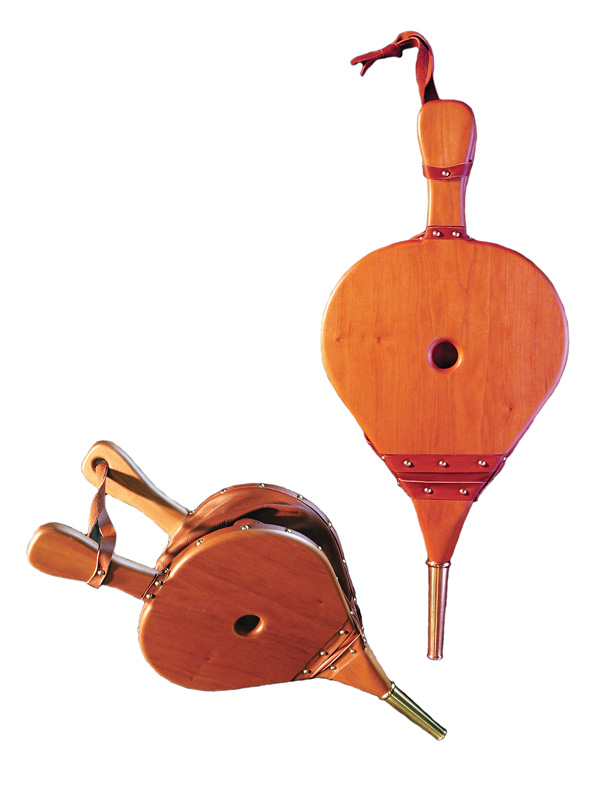 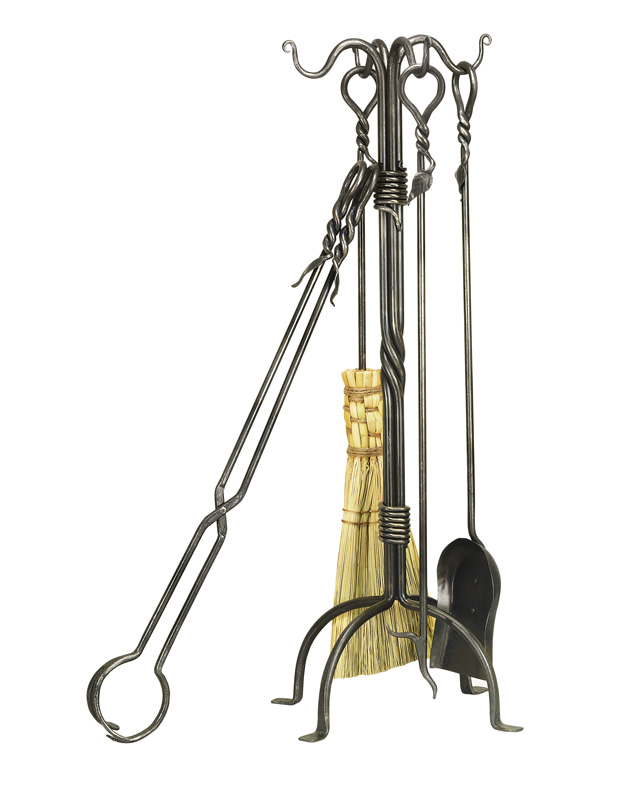 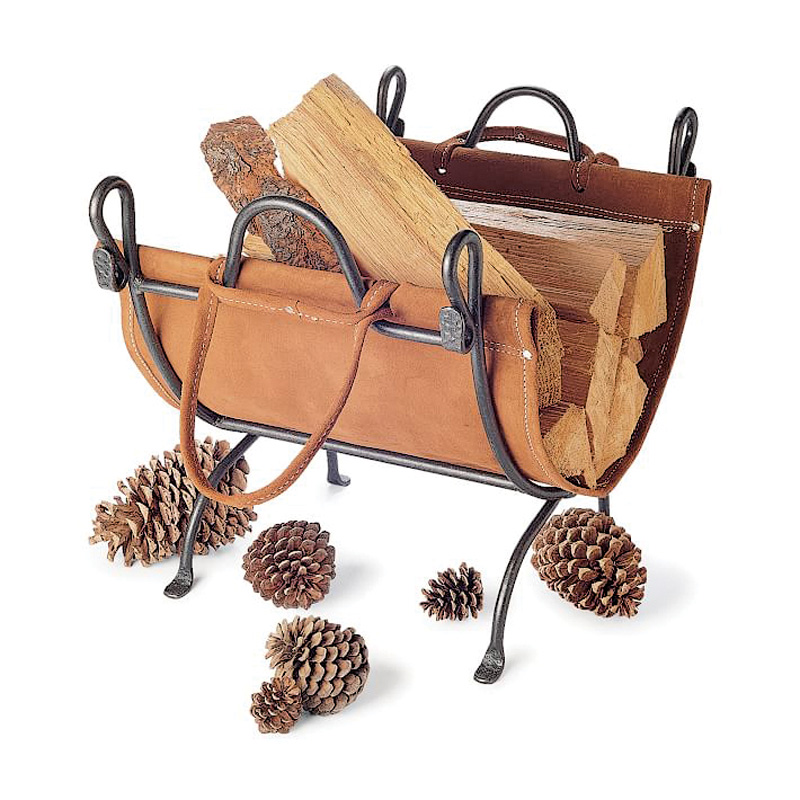 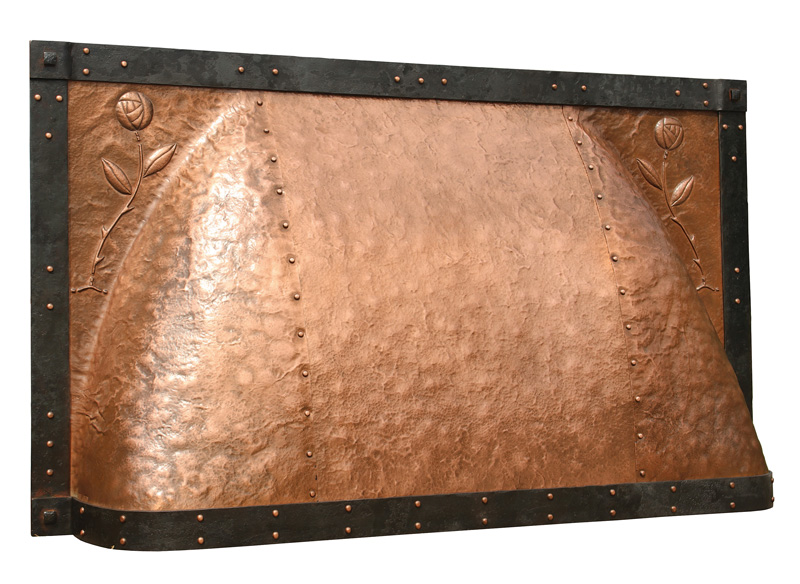 Fireplace Tools & Accessories
You can outfit the hearth with rustic iron, brass or copper, befitting a Colonial or a Craftsman.

1. Custom wood bellows in cherry or walnut with hand-cut leather work and solid brass hardware, by furniture craftsman Charles Shackleton. shackletonthomas.com
2. In forged iron, a set of four tools and stand with leaf finial. (Tools are also available separately.) Find more at historichousefitters.com
3. A folding log carrier in leather with a 24″ wide iron stand: The modern-goods purveyor West Elm calls it the Pilgrim Log Carrier, and there you have proof of the longevity of the design. westelm.com
4. Vogler Metal Design’s repoussé copper fireplace hood, micro-hammered with a warty texture, and a Glasgow Rose detail. Custom designed and fabricated hoods in a choice of eight metals, also nickel plated or powder coated from voglermetaldesign.com

Mantels Through Time
Every period had high-style and simple country examples.

1. GEORGIAN This high-style example is from the formal West Parlor at Washington’s Mount Vernon. Other rooms have much simpler mantels with no topper.

2. FEDERAL Delicate with carved, Adamesque ornaments, this fine example, ca. 1800, is by Samuel McIntire of Salem, Mass. Colonial Revival mantels may be similar.

3. GREEK REVIVAL Some examples are blocky and plain, but this one, from Tennessee, has Greek key-motif fretwork and fluted round columns.

4. GOTHIC Heavy mouldings, carvings, and Gothic or Tudor arches are prevalent; this extraordinary example is at The Willows, built in 1853 in Morristown, N.J.

5. RENAISSANCE This drawing was taken from a Renaissance Revival mantel and furniture-like overmantel with mirror in a ca. 1860 Italianate house.

6. ITALIANATE Marble (or faux-finished slate) mantels like this one were common in the 1860s and later, especially for Second Empire and Italianate homes.

7. TUDOR This carved wood mantel with a flattened Tudor arch dates to the 1840s–50s, but the style was revived for later Tudors and baronial English houses.

8. ARTS & CRAFTS While brick was more common, here matte-glazed tiles are flanked by built-in bookcases and small casement windows in the frieze. 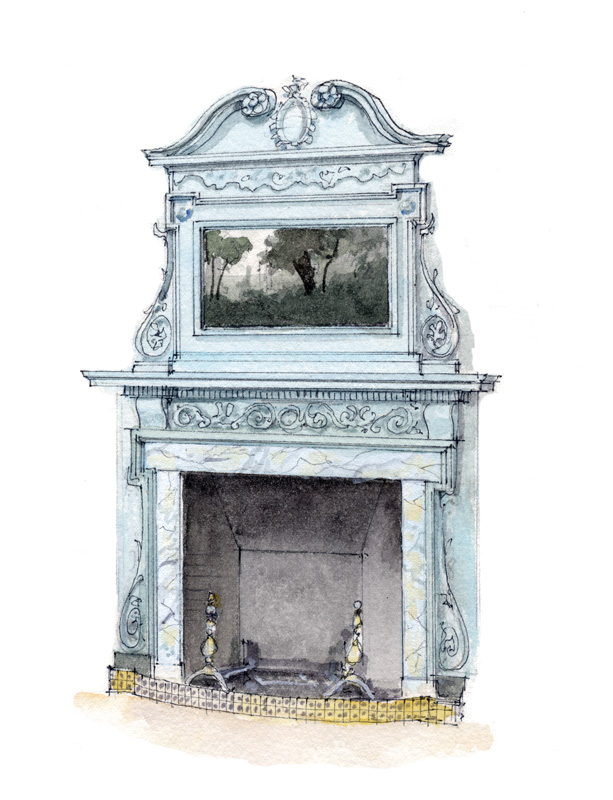 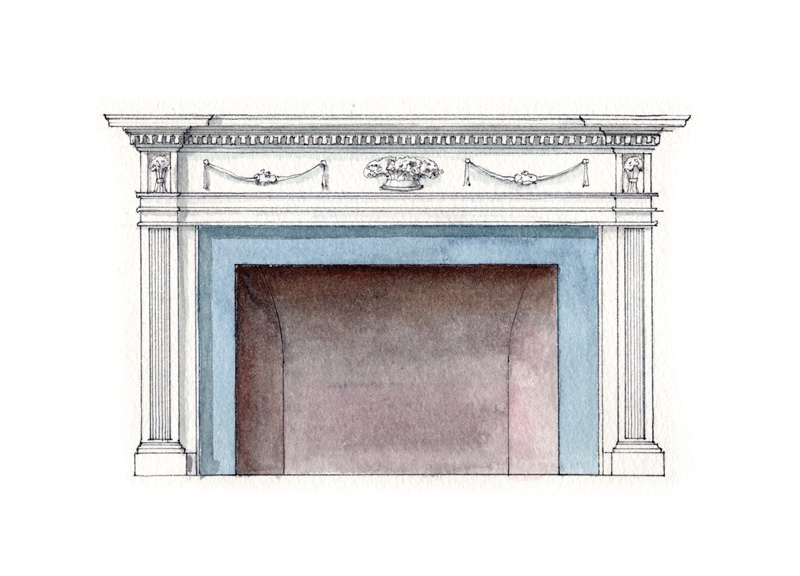 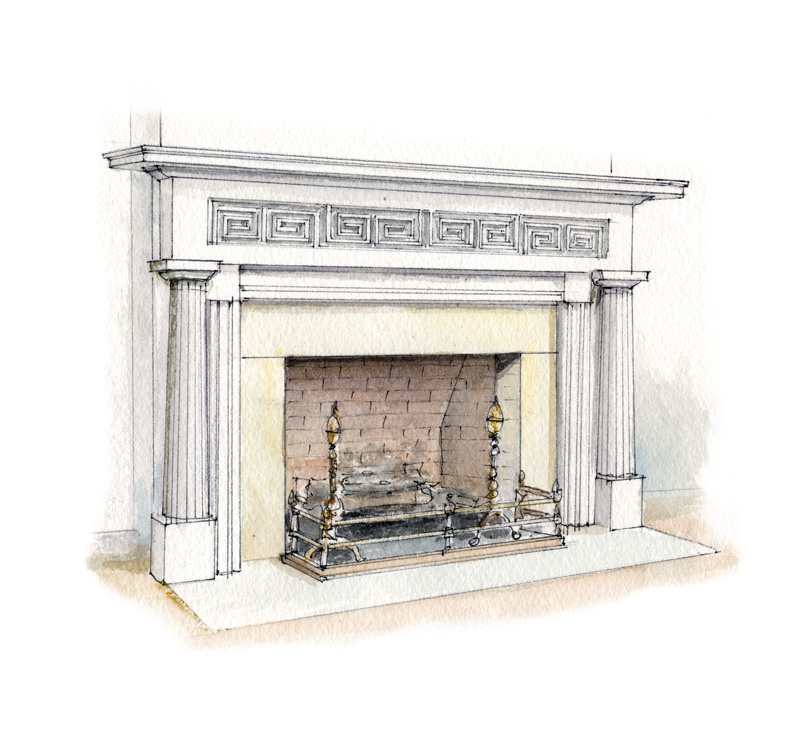 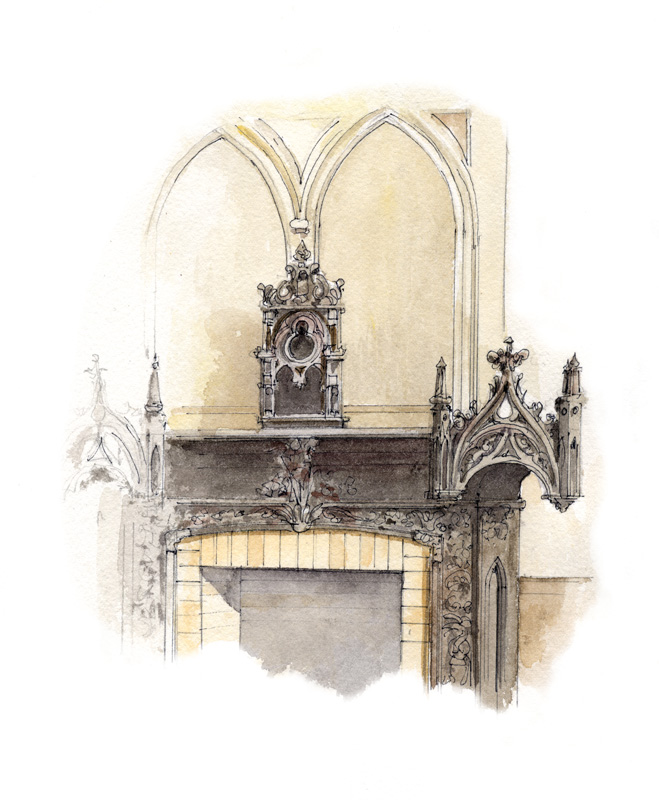 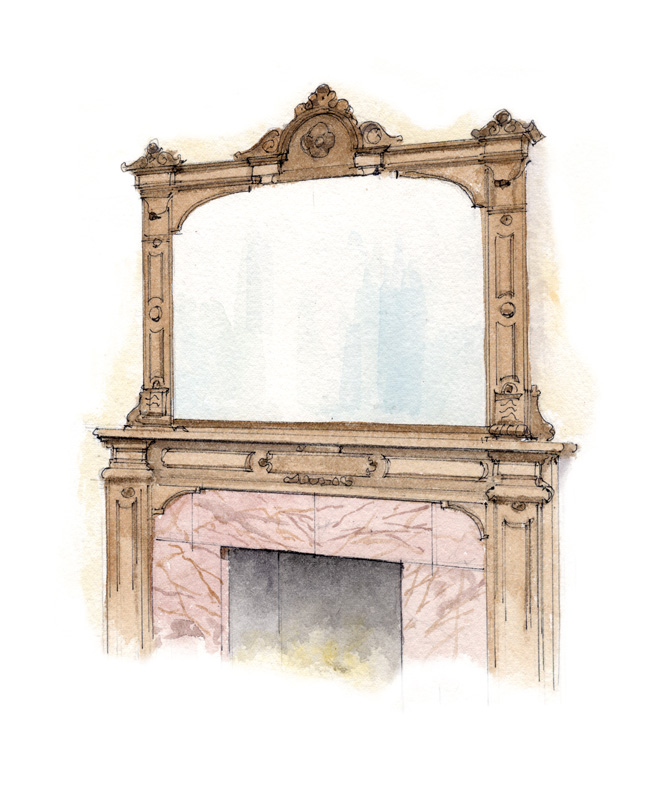 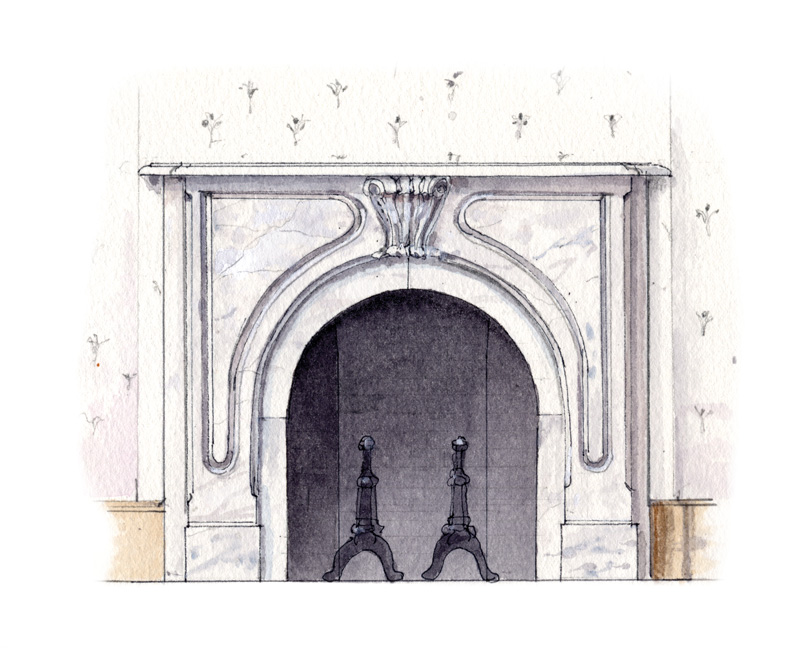 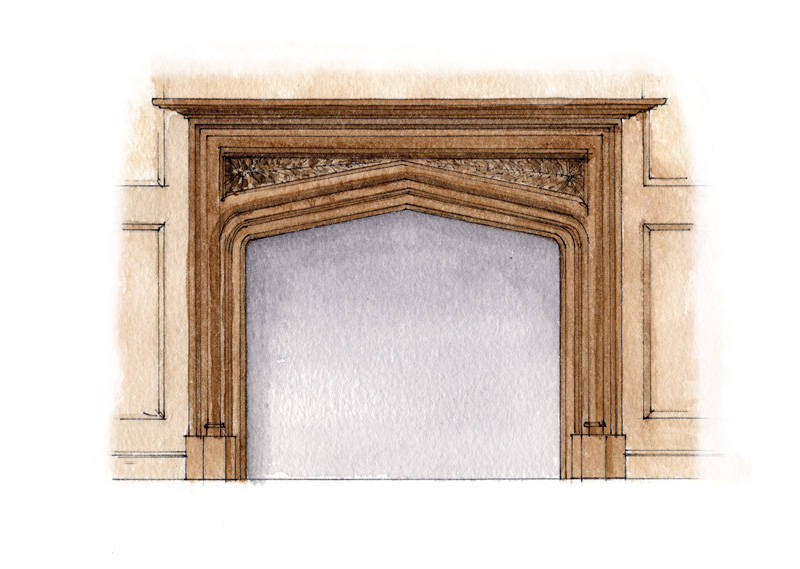 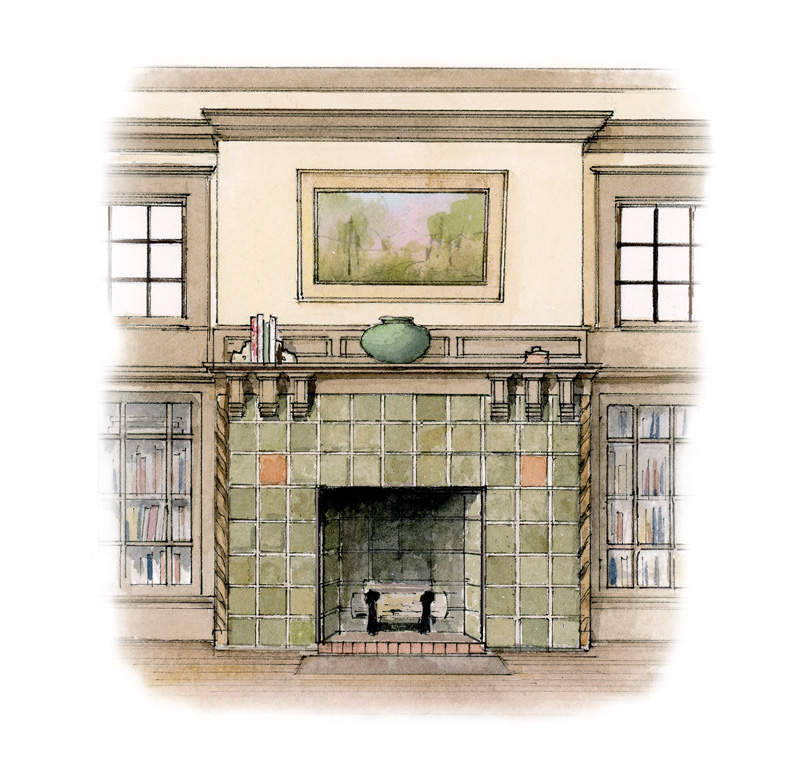 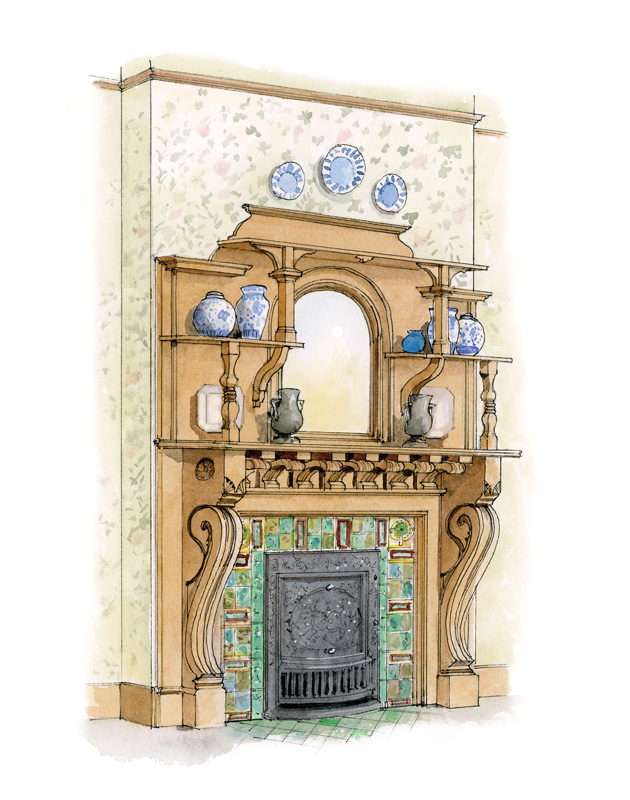