Nothing sets the mood of your house like period lighting. Whether it’s casting a warm glow around the room or shining a bright spot on a painting, the lighting you choose adds immeasurably to your home’s overall ambiance and décor, and it’s important to get it right. It’s also pretty easy to get it wrong.

A perfectly appointed Queen Anne house outfitted with Eastlake settees, flocked wallpaper, and stained glass windows that features an Art Deco ceiling pendant in the parlor would feel jarring. Likewise, a mid-century house, full of Saarinen and Eames furniture, that boasts a Colonial Revival chandelier in the dining room wouldn’t feel right, either. Yet old houses in need of restoration can easily have mismatched lighting that pre- or post-dates the rest of the architectural details. That’s because light fixtures are a relatively easy way to update the décor—they can be installed by a handy homeowner or through a quick visit from an electrician—so they tend to get changed out more often than, say, the wallpaper. But that’s good news, too, because it means that if your house needs better-matched lighting, the fix is a relatively easy one, as long as you know what to look for.

A few simple rules of thumb will keep you on track when trying to match up lighting. Like most repairs to your house, the most seamless fits will be era-appropriate and aligned not only with the broader defined style of your house, but also its degree of architectural finery. (The more high-style the house, the more intricate or elaborate the light fixtures can be.) Selecting design motifs similar to those that already appear in your home helps, too. Materials can be key, both in the finishes on metal and in the appearance of glass shades. Would original fixtures have been shiny silver or brass, dark hammered metal, or a polychromed finish? Would shades have been clear or etched, fluted or bulbous, amber or multi-hued art glass? Answer these questions, and you’re on your way to finding the perfect match for your house. When it comes to historically based lighting, many options are available for houses of every style. To help narrow down the choices, we’ve selected lights suited for four architectural styles of houses—Victorian, Arts & Crafts, Colonial Revival, and Art Deco. Our picks are based on offerings that were considered cutting-edge during the height of popularity for each architectural style. 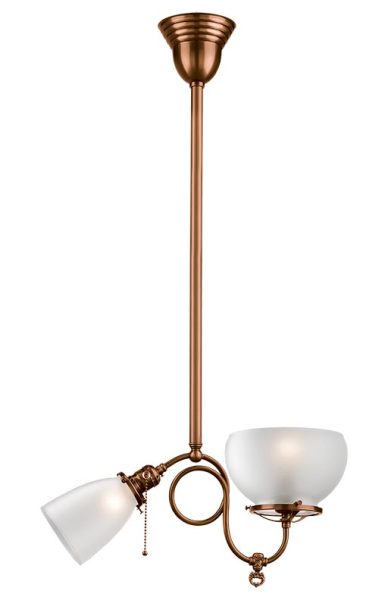 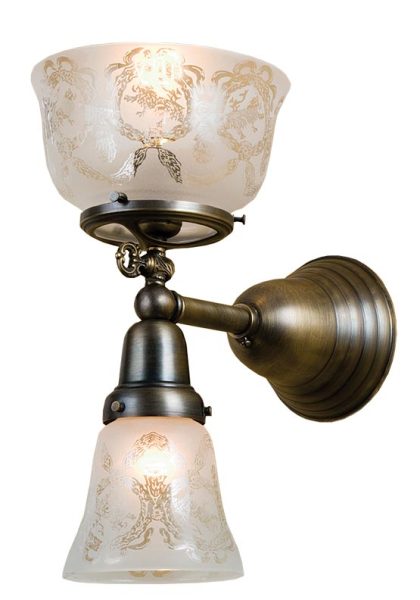 Coinciding with the Industrial Revolution, the Victorian era was a time of boundless innovation that touched nearly every aspect of American life—and nowhere was this more evident than in the lighting fixtures of the period. With the introduction of the carbon-filament lightbulb in 1879, Thomas Edison heralded a move away from the messy, potentially dangerous gas fixtures that marked the earlier stages of the Victorian era. However, the transition wasn’t entirely seamless—in the nascent years of electrical lighting, before widespread grid systems were developed in American cities, regular outages were a way of life.

A solution was found in combination gas/electric fixtures, which married small, downward-facing electric lights with larger, gas-fueled uplights that could be turned on when the electricity went out. In vogue during the turn of the 20th century, these dual-fuel lighting fixtures (almost always made of brass) took many forms, from sconces with only two lights (one facing up and one facing down) to chandeliers with up to a dozen. To accommodate their gas components, hanging fixtures such as chandeliers and pendants dangled from rigid poles rather than chains. In keeping with the era’s preference for fine detail, these fixtures often featured glass shades etched with delicate motifs. While modern reproductions have been updated to run solely on electricity, their aesthetic treatment still showcases the unique split personality of gas/electric fixtures. 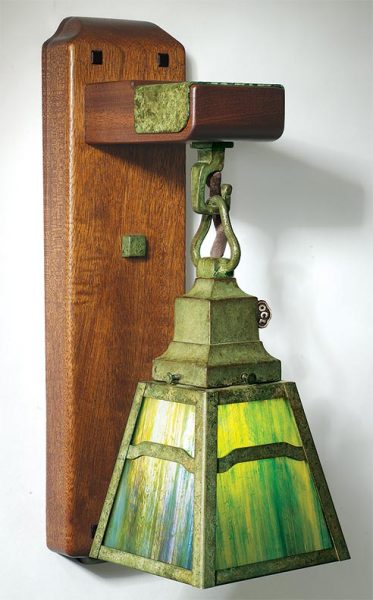 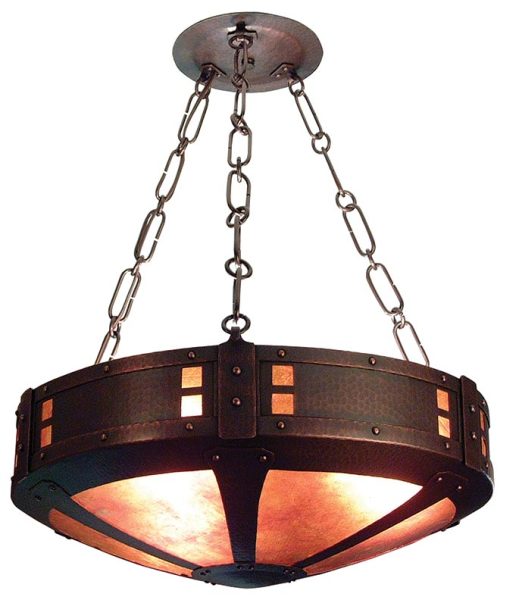 A revolution against the Victorians’ fervor for all things mass-produced, the Arts & Crafts movement celebrated handcrafted objects that highlighted simple, well-made construction rather than fussy decorative details. In the realm of lighting, this translated into an expression of craftsmanship that permeated the entire fixture. Working within the clean geometric lines promoted by tastemakers such as William Morris and Gustav Stickley, artisans created Craftsman- and Mission-style sconces, pendants, chandeliers, and lamps that perfectly harmonized with the rich woodwork and back-to-basics sensibilities of the era’s bungalows.

A premium was placed on the use of natural materials, which helped underline the movement’s emphasis on connecting with the natural world. A return to traditional trades such as blacksmithing produced an abundance of hand-hammered fixtures in weather-beaten metals like copper and iron. These fixtures were often accessorized with square or rectangular shades that incorporated another craft popular during the period: art glass. At times, this took the form of stained glass (which often matched the stained-glass patterns used on windows within a house), but it also could be found in the form of seeded, translucent glass in vibrant, earthy colors like green and amber. Hanging fixtures were often suspended from unadorned chains to complete the rustic tableau. 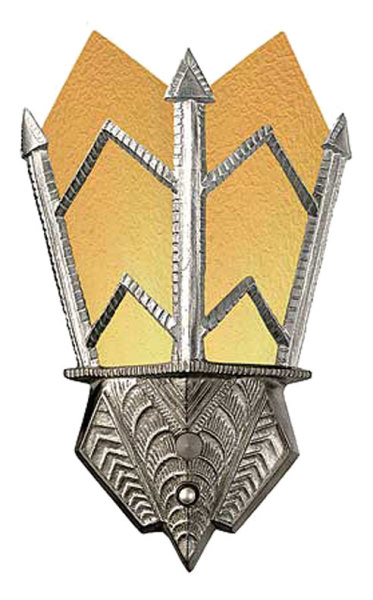 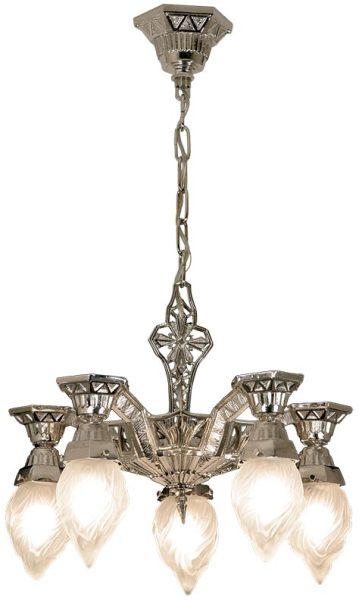 When it comes to departures from established style parameters, nothing beats Art Deco, which was introduced to the world at the 1925 Paris Exposition. Featuring cutting-edge, modernist designs inspired by the clean geometry of the machine age, Deco embraced experimentation with non-traditional forms and repetitive geometric motifs. More than a mere design trend, Art Deco and its close cousin, Streamline (which has similar forms, but less ornamentation), also convey a sense of optimism for the future, which helped a despondent public deal with Depression-era realities.

Marked by repeating circles, chevrons, and sharp geometric patterns that were inspired by timely industrial advancements like skyscrapers, airplanes, and spotlights, Deco fixtures were made from bright, shiny metals like chrome and aluminum. The innovative patterning could appear on cutout metalwork on the base and arms of a chandelier, the backplate of a sconce, or the ceiling mount itself—or, in the case of slipper shades, on the metal arms that connected oval glass shades strung together to resemble a scalloped turtle’s shell, which hung by chains from a decorative ceiling plate. Glass shades also could bear angular geometry; some even mimicked the iconic lines of the Empire State or Chrysler buildings. 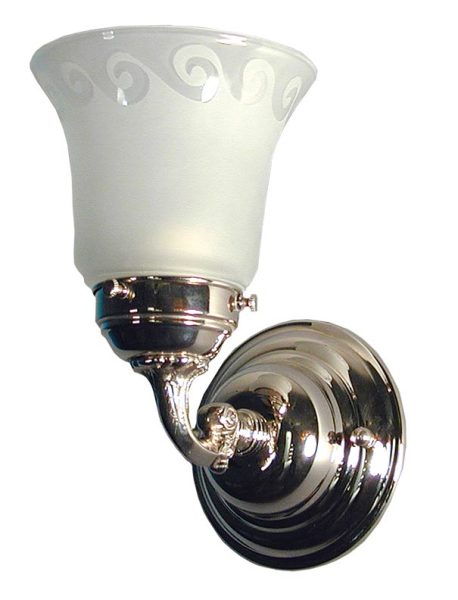 A look to the past and the classic, tried-and-true lines that defined the earliest American houses earmarks Colonial Revival lighting, which tends to be stylish, straightforward, and somewhat restrained. The fever for Colonial Revival architecture was sparked by nostalgia over our country’s founding and a longing to recreate the way our ancestors lived. Common chandeliers mimicked the look of multi-armed candle-powered versions from Colonial times, and were supported by a strong, central column (usually bulbous in form) that hung from a simple chain. The faux candles on these chandeliers often came with fake wax drips for effect.

However, some timely technological breakthroughs—namely tungsten-filament light bulbs, which threw off more light than carbon filaments—helped usher in a couple of creative new designs. The first was the bowl pendant—a single glass half-moon shade that was open on top, bouncing light off of the ceiling and back down into the room (the first example of indirect lighting). The second was the shower chandelier, featuring multiple glass shades suspended from delicate arms to resemble a meteor display on the ceiling. In terms of the materials used, simple and traditional reign here, with fixtures usually made of brass or silver, and accessorized with blown-glass shades (often wheel-engraved).

Decorating the Back Hall

Truisms About The Psychology of Colors