Window drapery in the mid to late 19th century was heavy and layered. A lace or sheer “glass curtain” was hung as a first layer, overlaid with long drapery panels (often puddling on the floor, suggesting that money was no object), and crowned with a valance, swag, or lambrequin, a pelmet or cornice. The treatments were further trimmed with gilded, carved, or glass holdbacks, tasseled tiebacks, crests—and hung from fancy rods with end finials. Proper window treatments often cost more than the room’s furnishings.

“The basics are the same today as they were in the early 1900s,” says Nathan Cole of Designer Drapery Hardware. “Creating the look for a specific period is more about selecting the appropriate style and finish for the hardware, all of which works in similar fashion.” Re-create a period look by choosing overstated elements. Color and finish selection is very important. Basic white, oak, and mahogany probably won’t be appropriate. Multi- tone, faux, and gilded finishes were more widely used and lend elegance. (Look for fancy finishes in Kirsch’s Buckingham collection and at Select Drapery Hard- ware, and at TMS-Menagerie .)

Both wood and wrought-iron rods were used and that choice remains today. “The round iron rod and the fluted wood rod were more popular in America than in Europe,” says Whitney Walker of Antique Drapery Rod Co. Today’s stock wooden rods range from 1 3/8″ to 3″ in diameter. To create a Victorian look with wood rods, consider using an overstated pole diameter (2 1/4″ or 3″), perhaps fluted, with a two-tone or gilded (or ebonized) finish. Kirsch’s Renaissance collection o ers faux finishes from bronze to burnished copper to gold.

Rods rest on brackets, which support the weight of the drapery. Brackets may be single, invisibly mounted inside the window frame; or return brackets mounted on the wall—the only option in the 19th century; or ceiling-mounted brackets for treatments that extend close to the ceiling. Rings or “carriers” suspend the fabric from the rod and are attached with drapery pins or stitched directly into the header of the fabric. Rings, brackets, and rods should match in style and finish. If you have a wide window, look for “bypass” brackets that let you move the rings past the support bracket to cover the ends of the window yet still allow the drapery to open and close.

When using rings, do not use “alligator” clips. Those belong on more contemporary window treatments; also, Victorian curtains are typically thick and heavy, so clips won’t bear the weight.

For wrought-iron rods, Select’s Iron Works Collection is a good option: a scaled-up 1 3/16 ” size is available, and uncommon among other manufacturers. Most 19th-century iron rods were finished in black or dark brown, but today the array of suitable finishes includes oil- rubbed bronze, gilded and black bronze, and antique silver. (Kirsch’s Iron Gold finish gives an opulent period look.) For proper support, the recommendation is to mount brackets every four linear feet along the rod. Bypass rings or open “c-rings” may be used if the panels need to move past brackets along the rod.

Rod-end finials are an important finishing touch. Motifs in the 19th century ranged from classical scroll and fret designs to naturalistic flowers, leaves, and acorns. Remember Victorian excess as you choose their size and design. (Be sure the finial will mount to the rod before you buy from separate collections.) Tiebacks, holdbacks, and crests were prominent features; gilded scroll- and leaf-design crests often were used as embellishments, installed just above a fabric valance. Holdbacks and crests can be used with wood and iron rods, or they can form a stand-alone treatment to create a swag.

After the turn of the century, smaller houses, lower ceilings, and the tenets promulgated by the Arts & Crafts movement contributed to simpler window treatments. Half-length “café curtains,” unembellished panels, and single-layer treatments, perhaps with embroidery or stenciling, were common. A single panel could be hung with brass rings on a 1/4″-diameter metal rod. Plain linen tabs sometimes were used instead of rings to hang the fabric on the rod. “The basic black iron rod in a simple twist, as well as the rope-twist wood rod, were popular for English Tudor Revival homes,” says Walker. 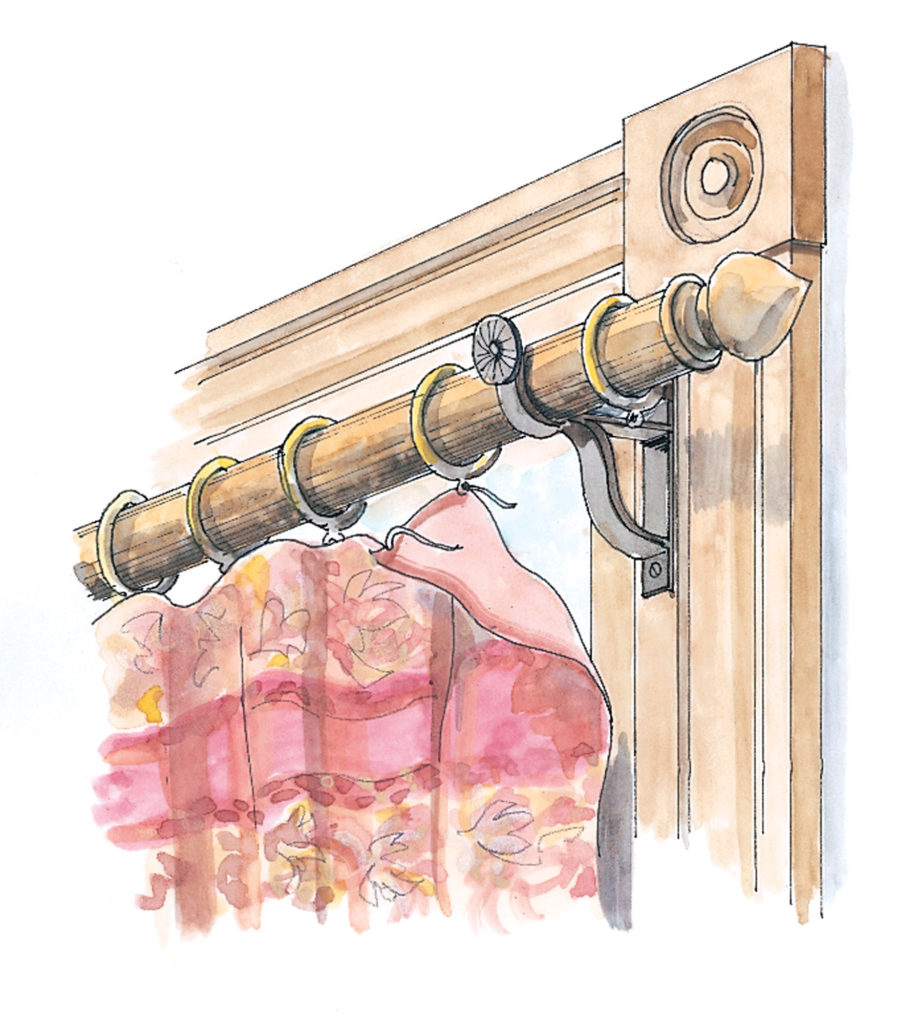 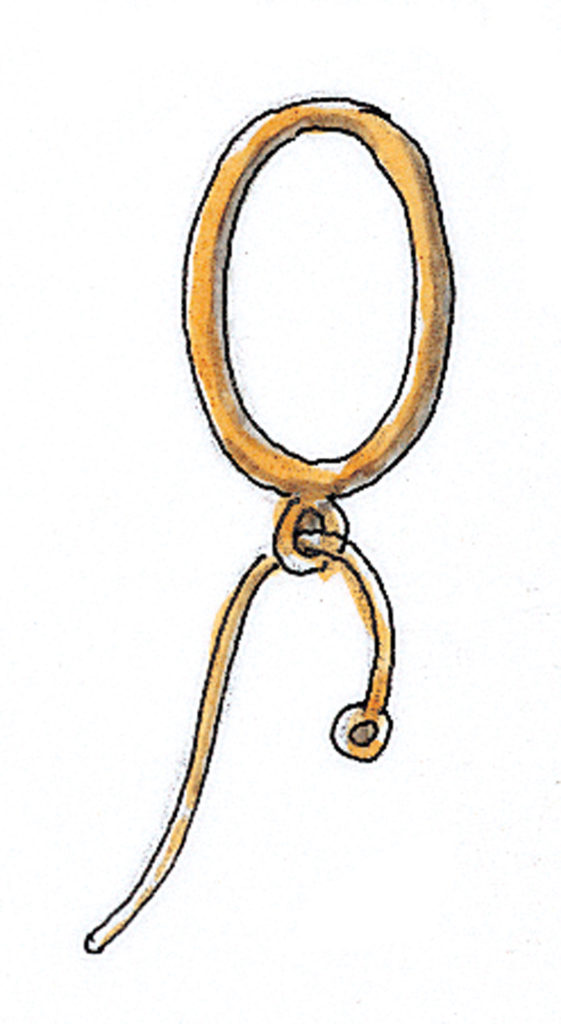 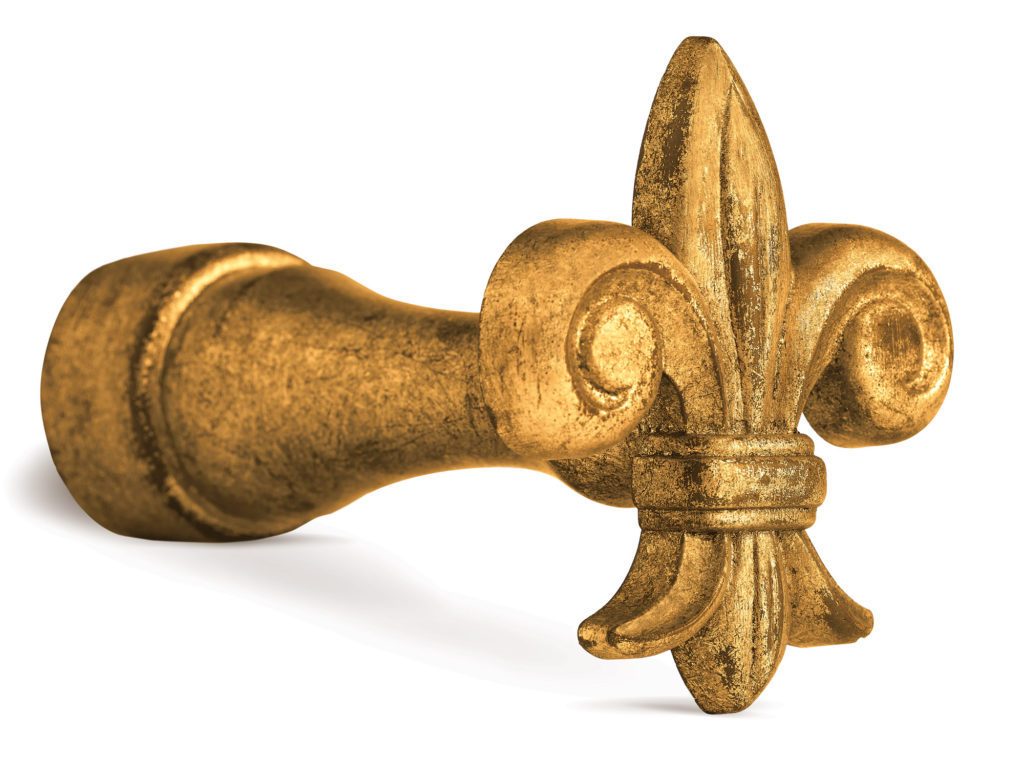 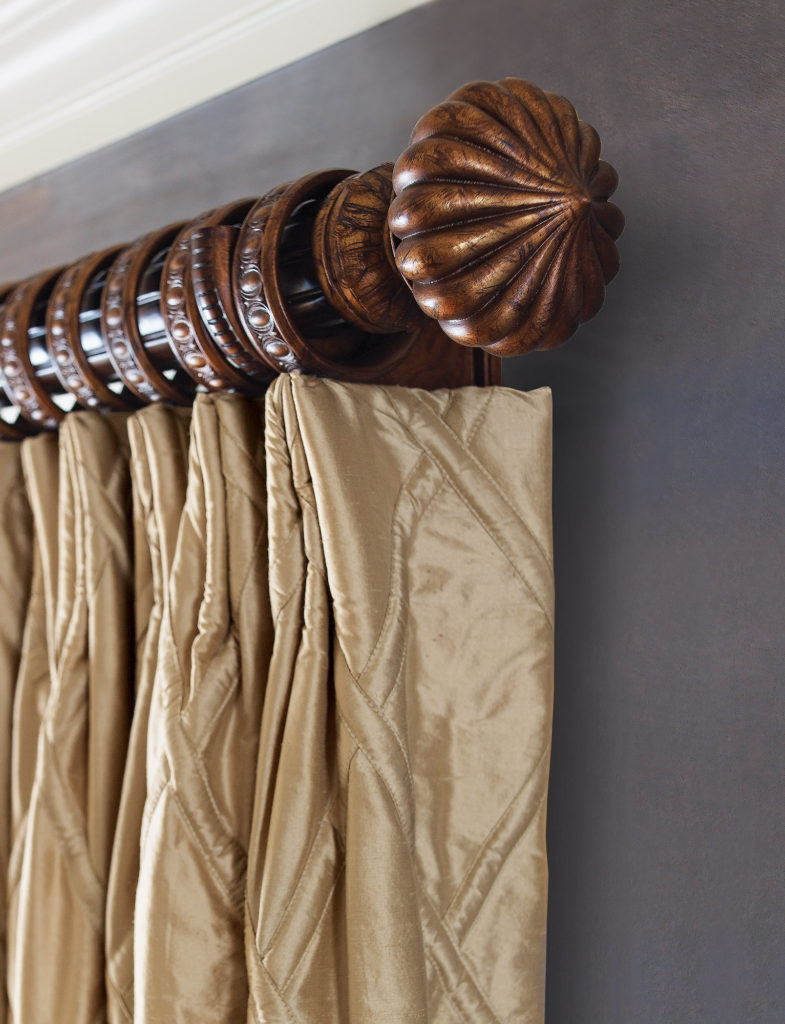 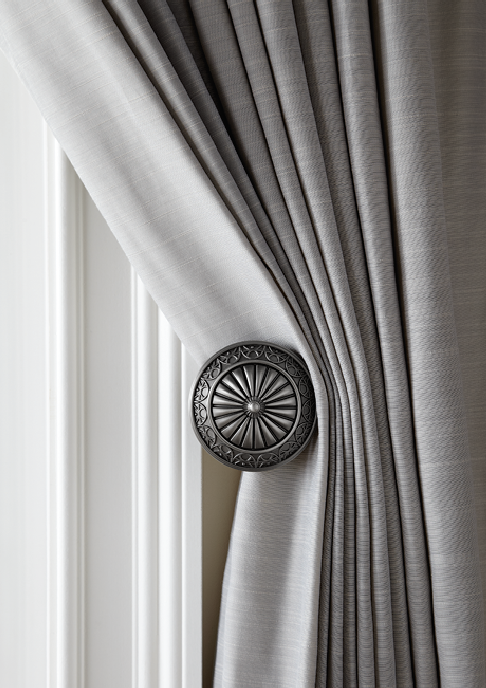 Tiebacks and holdbacks are used to hold drapery panels open are fun to choose. The holdback can make its own statement, like jewelry, if its style, finish, or design is different from the rest of the drapery hardware. TMS-Menageries has very nice Victorian-style crests and holdbacks in Vintage Gold and Antique Silver finishes. Antique examples ranged from gilded lilies to multi-color pressed and opalescent glass. A popular Victorian motif was the hand, signifying romance. Today Vintage Hardware & Lighting has a delicate Victorian “hand tieback” in brass.

A significant development in drapery hardware and fashion occurred in 1907, when Charles W. Kirsch founded the Kirsch Company. Kirsch’s introduction of the adjustable traverse rod revolutionized the window-treatments industry. Kirsch remains a leader in curtain and drapery hardware, with a huge selection and many products readily available.