By Rabbit Goody and Jill Maney

No curtains, no carpets, just a sawbuck or trestle table and a few chairs for furniture: The persistent myth regarding early American homes is that they were bare. The truth is, however, that while many Americans lived in small spaces with few luxuries, textiles were among the first things they acquired when they had even a bit of spare income. During the 18th century, carpets were found in many urban—and also rural—households.

Carpets, then as now, added greatly to a home’s comfort and visual appeal. Inventories from Dutch settlements in early New York show that even quite modest estates had some carpeting: The 1658 probate of Joseph Youngs, a mariner in Southold, New York, for example, had “fower [four] carpets” and “an old rugg.” The rug was likely a bed covering, but the carpets were meant for his floor [Southold Town Records, copied and explanatory notes added by J. Wickham Case, Southold, New York, 1882–84].

Large carpets, such as at the Shaw mansion in New London, Connecticut, had floor coverings ranging from pile carpets such as Wiltons to “painted canvas” in the hall, “homespun” carpet in the entry, “homemade carpet” in one room, “Scotch carpeting” in another, and “rag floor carpet” in yet another. These are the terms used in a 1796 inventory. “Scotch carpet” usually refers to ingrain carpeting, a flat-woven wool carpet with curvilinear designs, while “rag carpet” at this early period may not refer to a horizontally striped carpet, but rather a carpet with stripes in the wool warp running vertically, and rags used as the nearly invisible filling or weft. In addition to this great variety of floor coverings, the Shaw household also had straw carpets.

James Fenimore Cooper, the highly successful author, thought straw carpets were “beautiful, fragrant, and cool” in summer. A few decades later, Eliza Leslie, a popular author of recipes and domestic advice books, warned new wives that straw carpets, particularly those in contrasting colors that imitated geometric ingrain carpet, looked rather cheap. “Miss Leslie” went so far as to dub some of them “ungenteel.” Even so, straw carpets persisted in many houses, great and modest, throughout the 19th century.

Matting imported from China, Japan, Indonesia, India, and other sources was available from at least the beginning of the 18th century through the 20th. (Straw carpets, also called straw matting, were made of jute, china grass, rice straw, and other materials, in many different woven patterns, often laid down in strips and sewn together.)

Sometimes straw mats were laid down in summer and taken up in fall, when the wool carpets would be put down. In other households, as designer J. C. Loudon suggested, they were left tacked to the floor and acted as underlayment for the winter layer of wool. This helped the expensive wool carpets last, and added insulation.

Early American homeowners prized their carpets because they contributed so much to the beauty and comfort of their bedrooms, dining rooms, halls, and parlors. While original examples are rare, enough exist so that a few dedicated researchers and craftspeople have developed an understanding about how they looked and how to reproduce them. Watch for carpet fragments when you’re at flea markets, auctions, or antique shows. You may find a treasure.

A Glossary of Lesser Known Carpets

A type of the early 18th to early 20th
centuries, characterized by vertical stripes running the length of the carpet in the warp, which is wool. The colored warp yarns are so close together that the horizontal filling (or weft) is almost invisible. In some early examples, the filling is rags; in others, several strands of tow linen were used. Early Venetians may have warps of very fine worsted wool. The colored yarns become progressively thicker and the carpet heavier through the 19th century. Early 19th-century Venetians often had two alternating colors placed closely together in the warp. These “ladders” are often missing in reproductions. Also, early Venetians sometimes incorporated differentially dyed warp yarns (ikat) to create a watered effect. It’s not clear how common this was, because surviving examples are rare. 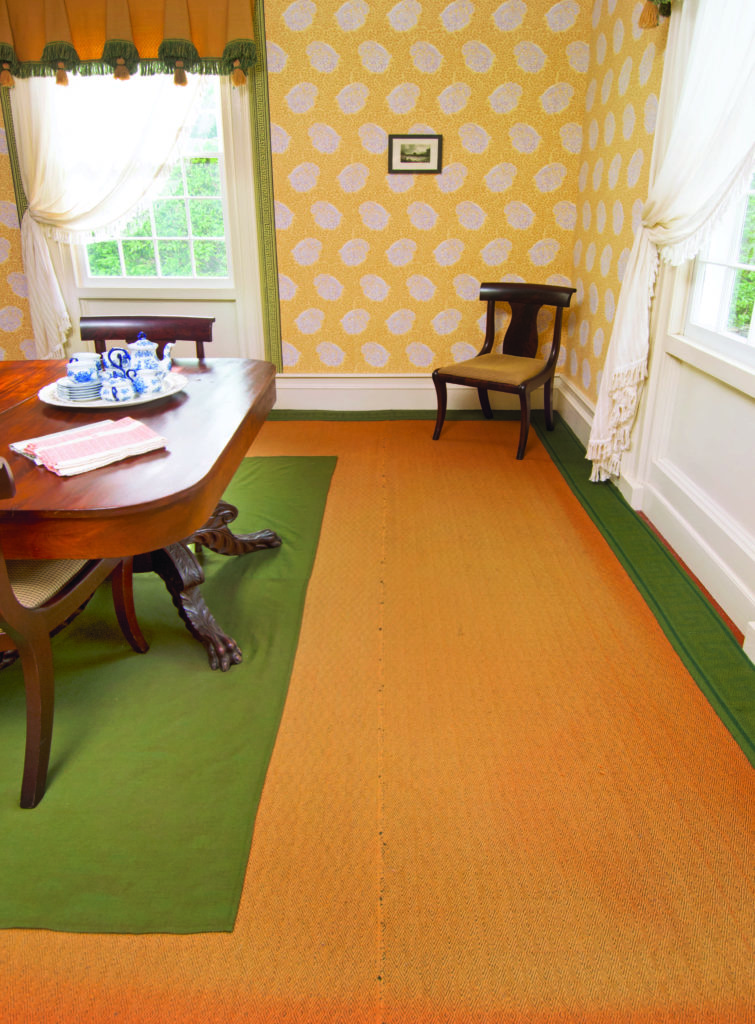 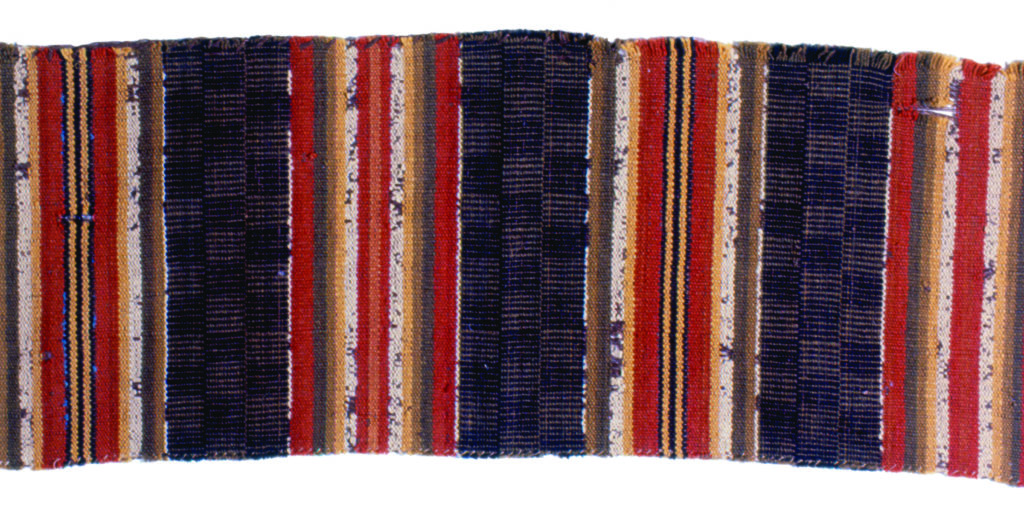 Carpet with center motif and borders. As with other Venetians, colors run vertically. The weave is warp-faced but has two layers. The top surface is figured by curvilinear designs, abstract but not geometric. The few surviving examples have borders different in pattern and color from the center motifs. The filling (horizontal yarns) in these examples is a coarse linen grouped together in multiple thread bundles. Weavers created the carpet designs by using a figuring head on their looms, such as a jacquard attachment or an ingrain carpet head.

A carpet with diamond pattern. Derives its name from the vertical warp stripes that are characteristic of all Venetians, but this form adds diamonds or diamonds with variations to the entire surface. Surviving examples have borders in colors different from the center stripes, but so few original fragments survive that we don’t know if this was always the case.

Fragment of striped carpet with wool warp and tow weft, made 1815 by Mrs. Deliverance Belknap of Sturbridge, Massachusetts.

Also called plaid, these carpets appear in early and mid-19th-century paintings and illustrations. We also find them in weavers’ draft books, such as Silas Burton’s (1790–1830).

Sometimes referred to as common carpet—“common” in this context meaning inexpensive, readily available, and less difficult to weave. Often woven in two different colors, sometimes with additional sewn-on borders, birdseye carpet patterns consist of diamonds within diamonds. Although this was a “plainer” carpet, when paired with borders, like the Greek key border at the Jonas More House (see photo on p. 56), birdseye can be quite attractive.

A nearly universal floor covering used in both rural and high-style urban homes all over America. Straw matting came in colors and in patterns. Very few samples survive.