Whether your taste runs to colonial wire-arm chandeliers or hammered copper with mica shades, period-inspired lighting is easy to love. But are reproductions really functional in this age of halogen lamps and organic LEDs?

Most definitely. Take the sconce, for instance. These wall fixtures often seem merely decorative to us, but they are among the most versatile lights ever invented. The earliest—lit by candles—were portable, moving from room to room and up and down staircases. With gaslight, they became fixed, often in the form of wall brackets.

Sconces of all styles are ideal as ambient lights in formal rooms like the parlor, and serve as functional lighting at the top of a staircase or other tight, dimly lit spaces, like bathrooms. Sconces lend themselves to symmetry, often popping up in twos: on either side of an overmantel in a Georgian house, or on a wall intended for a buffet in a Foursquare dining room. Paired sconces make ideal bathroom fixtures, especially on either side of a mirrored medicine chest. Sconces come in just about every style, from colonial tin mirror-backs to the pinprick-perforated aluminum hourglass shapes of the 1950s. Shades can be placed up or down to cast light where it’s needed.

Chandeliers also have a history dating back to candlelight. While most early American chandeliers were in churches and meeting houses, these centerpieces have emerged as an architectural favorite in parlors, entry foyers, and dining rooms. They’re also popular, in more casual guises, over kitchen tables and islands. 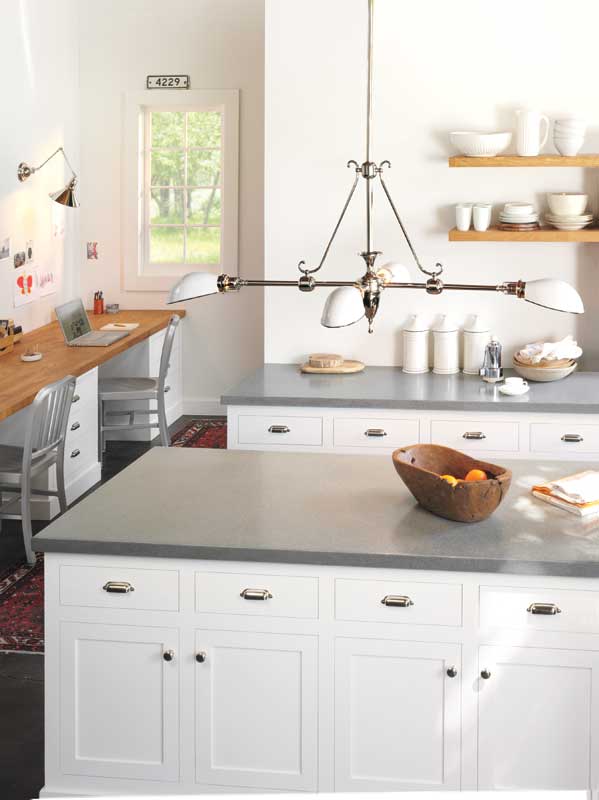 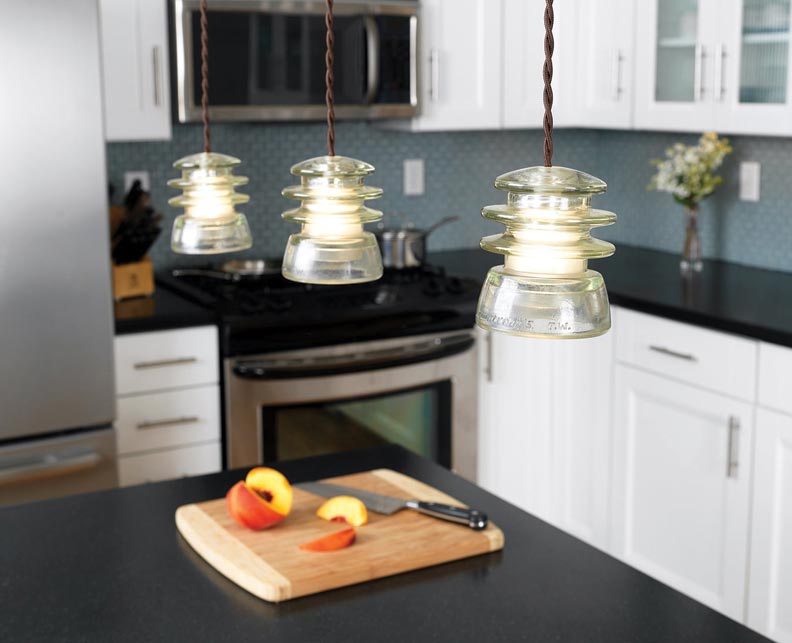 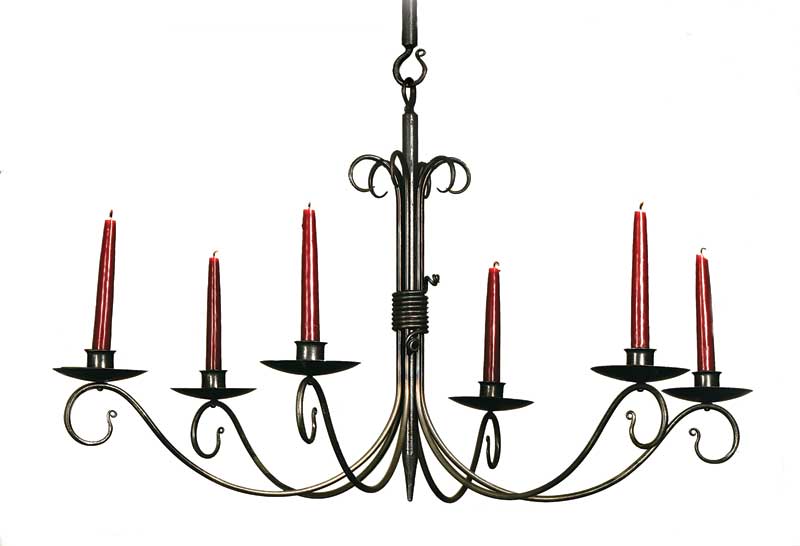 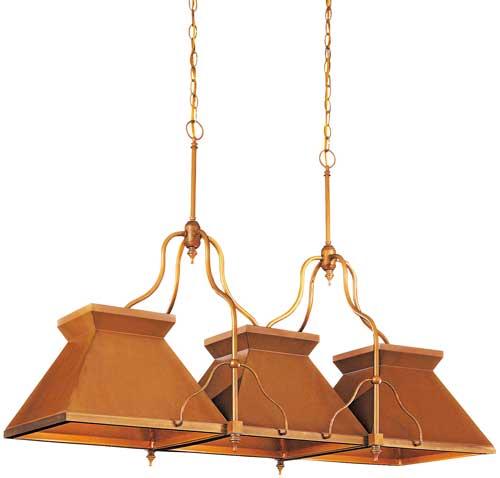 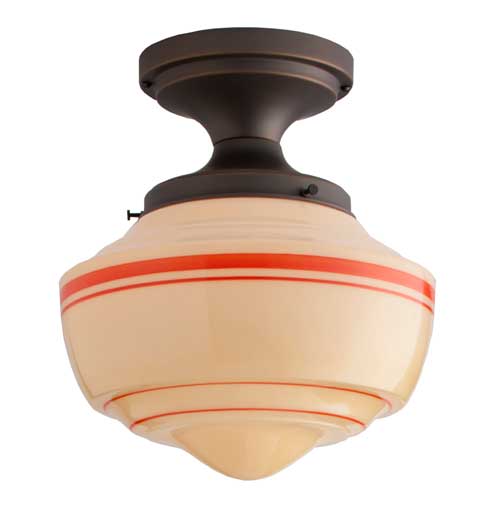 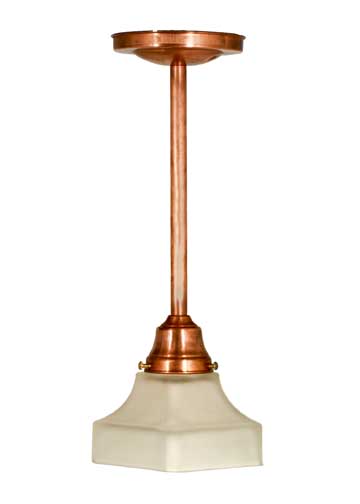 Chandeliers can be colossal, or petite and intimate; scale should be tailored to the square footage and volume of the room; or, when the fixture hangs over a table, to the table’s size and shape. Early American wire-arm chandeliers were built in tiers. Simpler ones were composed of a single tier, and the chandelier was often wider than it was tall, dimensions that suited the low-ceilinged rooms found in 18th-century homes.

The arms and brackets of chandeliers and sconces invariably held their lights upward to accommodate candle or gas flame, until Edison’s incandescent bulb almost literally turned lighting on its head. Flameless electricity meant new fixtures could point light up, down, or sideways. The advent of electricity produced a burst of new fixture styles: the pendant (the original downlight); the shower fixture, where two, three, four, or more pendants hang in a cluster from a plate on the ceiling; the inverted bowl fixture; and the ceiling-mounted light.

Candlelit or gaslit chandeliers cast light around the room, but these new styles shot light down, or in the case of the bowl fixture, bounced it off the ceiling. Depending on the style, directional placement of the lamps, and shade color, the overall effect can vary, from subtle ambience to bright task lighting, or a combination.

Shower and bowl fixtures were especially popular in Arts & Crafts and Romantic Revival homes of the ’10s and ’20s. Both can be excellent choices over a dining-room table or in a foyer. Because they can be mounted flush to the ceiling or semi-flush on a short stem, ceiling-mounted lights are versatile. Depending on lamping, enclosed ceiling mounts move with grace from kitchen to the hall to porch. Stem-mounted versions with colored shades go places where a pendant cannot, and look good in groupings: Think of them as a period substitute for recessed lighting.

Pendants can’t be beat for more focused task lighting. The simplest pendant is a light bulb dangling from a wire. Because many reproduction pendants have the most common fitter size—2¼”—they also have the greatest range of shade possibilities. Whether clad in a simple white shade or dressed up in hand-blown art glass, the pendant goes solo over the kitchen sink, in a row of three or more over an open counter, or down an entry hall to welcome guests.