Our house lives large. It’s fun to stand on the elevated hallway and survey the action going on pretty much everywhere. (This comes in handy, as my wife and I have a crawling baby.) Acute window angles and sweeping curves give it a great off-kilter feel; we call it the Mad Scientist house. Its open layout and large windows bring outdoor space inside, a feeling enhanced by a curving indoor planter and two original, 7′-long domed skylights (from a company that made airplane cockpit glass). The natural wood tones, Savannah gray brick, and floors of American slate dignify the house, which is essentially one big open space. At either end, sliding doors lead to patios; we throw the glass doors open during parties, which creates unbelievable flow.

When Adrienne and I were looking at houses three years ago, we focused around a wonderful place called Ardsley Park, which is filled with beautiful houses built from the 1920s through the 1940s. Still, they began to look alike, and nothing excited us. On a whim, our realtor took us to this modern house, which was so wild we didn’t take it too seriously. Eventually we realized we kept talking about this one. We’d say, “Wouldn’t it be crazy to live in that house?” One day we answered, “Why not?” 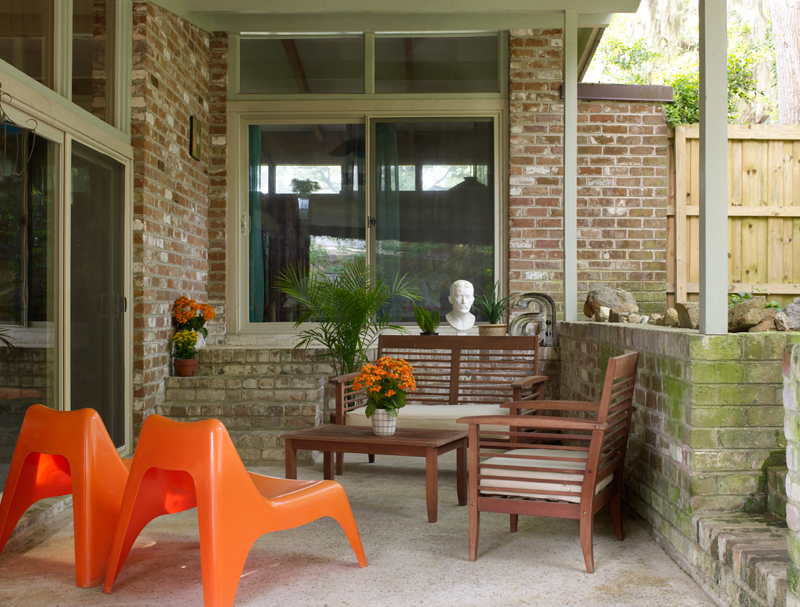 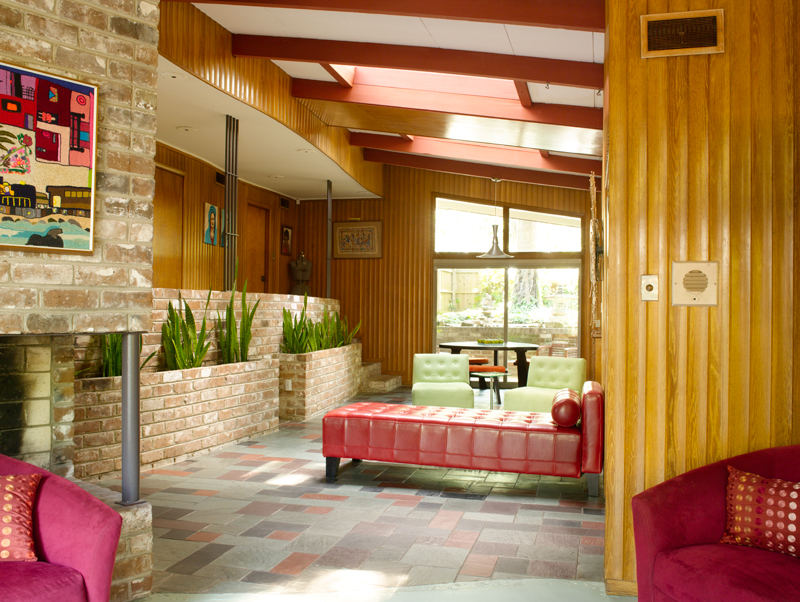 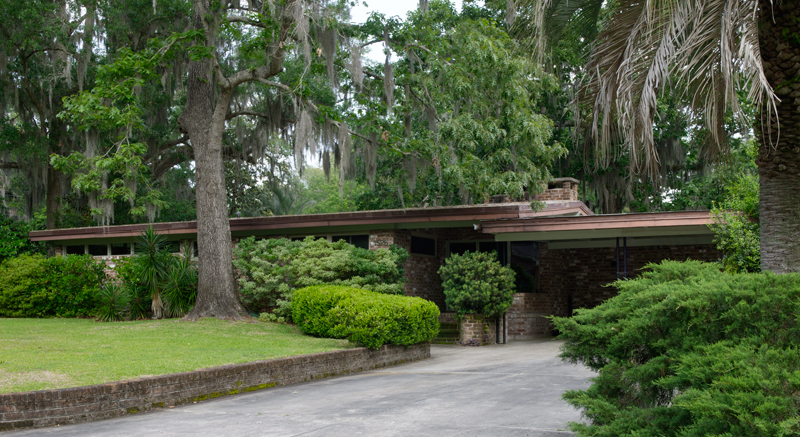 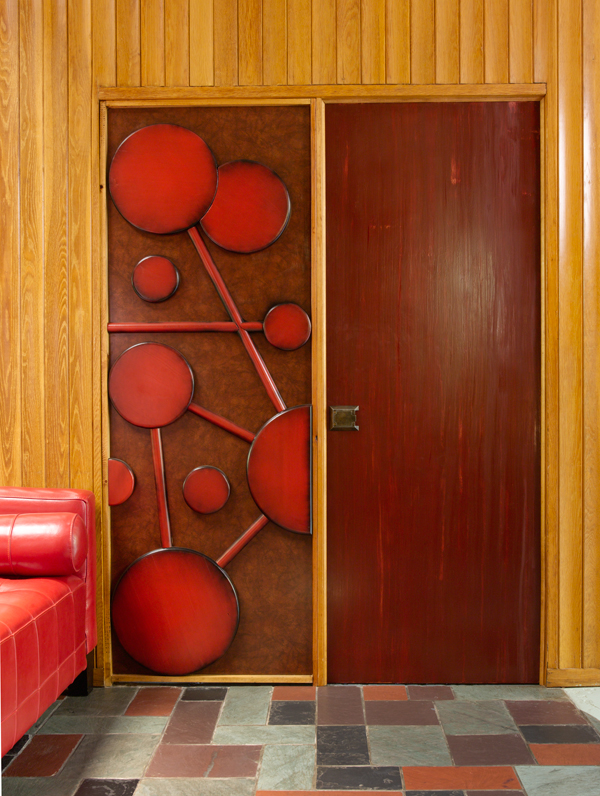 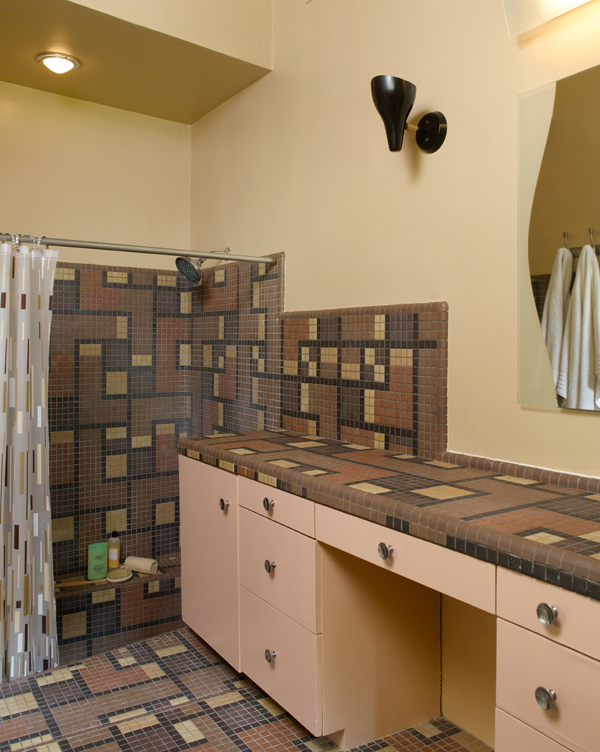 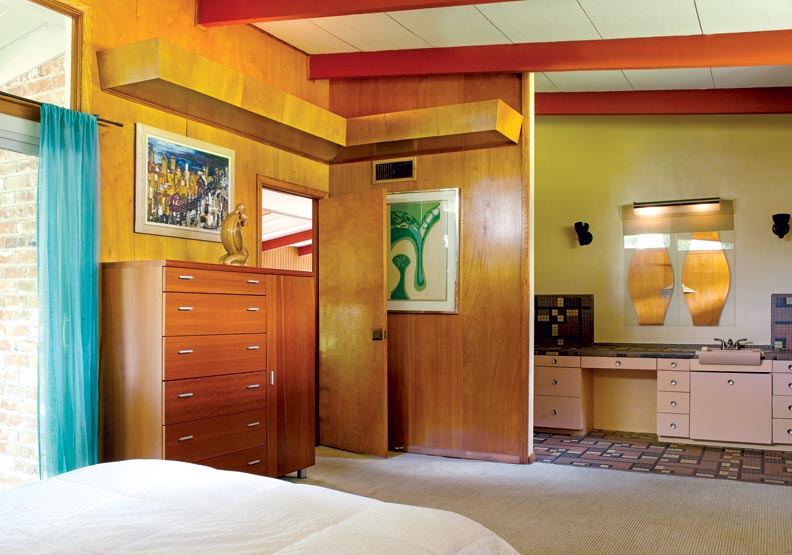 Right away, we were invited to a party of about 15 owners of other MCMs (mid-century moderns) in Savan nah. Framed pictures of our house and others hung on a wall of the party house! We’ve learned a lot, and our fellow MCM owners have helped us locate appropriate furniture and sources for appliance repairs.

We’re in Magnolia Park, about five miles southeast of Savannah’s Historic District. Our neighborhood was a mid-1950s subdivision with a range of architectural styles: Colonials, split-levels, ranches. Our house and its “little sister” house five doors down (also recently restored) were designed by John Ahern, an architect for the developer, the Lamar Company. Mr. Ahern designed our house as his own residence; he lived here for just a year or two, however, before moving to Charleston to start his own development company. (He’s still there, and his son runs the company.)

These two Ahern-designed houses share the same soffit uplighting, slate flooring, and other features. Just across the street is a pretty wild house designed by a local architect named Henry Levy for his family. The neighbors behind us, here since 1956, tell us that the longtime owners of our house were from the West Coast and had Hollywood friends. Marilyn Monroe (allegedly) and Telly Savalas (confirmed) spent a few days in our house while visiting Savannah, back in the day.

This house truly benefited from having the same owners, the Vannordstrands, for 40 years. We didn’t have to do too much restoration, just basic repairs and painting, installing some carpet, and turning the lower-level office into a third bedroom, the nursery. In the yard, I pulled back decades of overgrowth to reveal the original beds, and found buried 76 lunchbox-sized blocks of granite that I repurposed to create the border for a second rock garden on one side. We have the original tap light switches throughout, and every interior door has its original Soss recessed hinges and flush brass door levers, which aren’t made anymore.

Our kitchen is a period piece. The General Electric pink oven, range, and refrigerator date to 1956. The fridge is a rare GE wall-mount refrigerator; all 400 pounds of it hang from the wall, so refrigerated food and drink are at eye level. The cabinets are made of wood, painted pink, with metal rails that hold ribbed, frosted-glass sliding doors. We removed (but have kept in storage) some of the doors to create open shelves.

Our house was published in the 1956–57 National Association of Homebuilders Journal of Homebuilding. It’s just something you don’t expect: Savannah, revered for its National Landmark Historic District of restored (and mostly preserved) 19th-century houses, has a wonderful collection of exceptional mid-century modern homes. They are the city’s next preservation frontier. Just recently, our house was included on a MCM tour held by the Georgia chapter of Docomomo. The chapter president called ours “the best-preserved mid-century modern home in Georgia.” Cool.