In the 1930s, a small enclave of homes rose up on Chicago’s North Shore, creating a sublime neighborhood that backs onto picturesque dunes and beyond them, Lake Michigan. The houses—Tudor style with classical cut-stone entryways and exteriors of distinctive Wisconsin lannon stone—created a gracious architectural tone. Dense and mysterious, lannon stone was named for William Lannon, who settled in Wisconsin in the early 1800s and, as the legend goes, felt the stones spoke to him, urging him to build a house.

A quarter-century later, a builder filled one of the lots with a 1950s red brick Colonial, a rude interruption that degraded the neighborhood’s identity and historic value. “It did not fit in at all,” says Julie Hacker, principal with her husband, Stuart Cohen, of Cohen & Hacker Architects in Evanston, Illinois. When Cohen and Hacker entered the picture two years ago, a young couple had bought the property, razed the Colonial, and asked Hacker and Cohen—who have spent their careers collaborating in harmonic rhythm—to design a home that did justice to the neighborhood and honored the spirit of North Shore settlements.

Cohen and Hacker embraced the project. “The idea was to make the house comfortable in the context of the surrounding traditional 1930s houses,” Cohen says. Today the three-story house, in modern style, carries the same visual beauty of the enclave and the defining lannon stone, yet asserts its own quiet identity.

The focal point of the front exterior is the formal classical entryway: a dark wood front door surrounded by the same cut stone that defines the neighborhood, replete with carved stone brackets and an arched canopy. (The surround is the only thing remaining of the original house.)

The back of the house segues into a more casual statement, recognizing the presence of the beach and Lake Michigan. Treated as an interlocking volume, with a large screened porch with fireplace, spacious windows, and second-floor balcony, the backside’s painted clapboard exterior takes full advantage of a landscape punctuated by dune grass, tall graceful trees, and a path that leads to the lake.

The house differs from the neighborhood in some exterior details. “Many of the roofs here are slate,” Cohen explains. “We elected to have a shingle roof.” And while most of the windows of the enclave’s other homes are dark brown or black steel, this home’s windows are white, again suggesting a bright, beachy tone. “We think of it as having traditional segments, but it may not be a definable style,” Cohen says of the home. Its materiality and scale—making sure it fits with the surrounding houses—was the important point, Hacker adds. “We were not stylistically driven.”

Cohen and Hacker have a lilting, warm way of finishing each other’s sentences, sometimes even knowing what the other means before the speaker realizes it. This probably comes from working together for more than 30 years as a married couple, collaborating on architecture by day and going home together at night to a happy domestic life. Both bring their own expertise and impressive history to the partnership.

Before returning home to open a firm in Chicago and teach, Cohen worked in New York City for Richard Meier and Associates and Philip Johnson. He has received many awards for design excellence, including accolades from the American Institute of Architects, and Architectural Digest’s AD100, the magazine’s designation of the world’s top 100 residential architects.

Before she joined her husband’s firm, then Stuart Cohen and Associates in Chicago, Hacker was a project architect for Hammond, Beeby and Babka (now HBRA Architects) in Chicago. She has received the Chicago Women in Architecture Award and was elected to Fellowship in the American Institute of Architects in recognition of her contributions in the field of design.

The couple’s expertise in art and history shows in the home’s interior, in its soft, open lines and creative use of space. Cohen and Hacker designed an exquisite walnut server-cabinet as a room divider between the living room and kitchen. The cabinet, fabricated by Paoli Woodwork Inc. in Franklin Park, Illinois, is a work of art.

The first-floor’s layout—living room, dining room, family room, kitchen with eating area, and powder room—is anchored by traditional vernacular elements: classical columns, beamed ceilings, and wide-cased openings with interior transom windows. Washed in light colors, the space is open and welcoming, perfect for the fundraisers the homeowners hold. The living room, to the left of the front vestibule, has a sweet piano alcove. “We’re very interested in big open floor plans, but we like to define the spaces within,” Hacker says, “so it doesn’t feel overwhelming.”

Upstairs are the master bedroom suite with study and two children’s bedrooms. On the third floor, tucked under the eaves, is a guest suite.

The interior is united by a color scheme (in soft tones of blue, green, and taupe, a collaboration with the Chicago interior design firm Jamesthomas, LLC) and wide-board oak floors with a dark walnut stain. The kitchen’s limestone floor, from Materials Marketing in Chicago, brightens the space and sets off the countertops.

Ingenious design elements open up interior and exterior views throughout the house. From the dining room table, for instance, there are views of the family room fireplace to the left and kitchen to the right, centered by the lovely walnut cabinetry with open glass that affords a view. Standing at the kitchen sink, there are views through the door to the dining room, and, by slightly turning, through the windows and French doors leading to the family room. “Having windows line up is one of those things we feel orients a person as they move through the house,” Hacker says.

And every window on the home’s back and north side leads to spectacular views of Lake Michigan. That is just one of the many reasons the house feels so naturally at home on its site. As a whole, along with its lakefront setting, the house exudes a quiet, stately presence. “It’s the ordering of the elements, from the trim to the bands of windows,” Cohen says, “that gives the house its calming presence.” 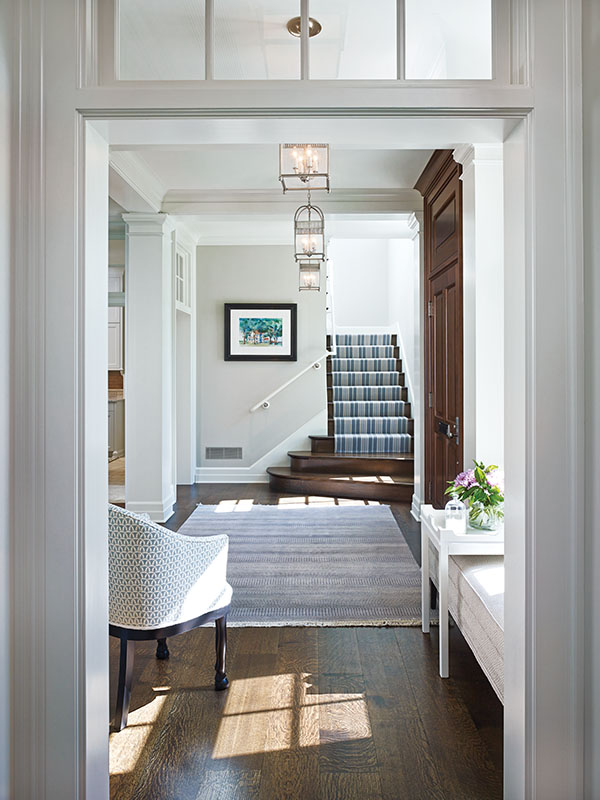 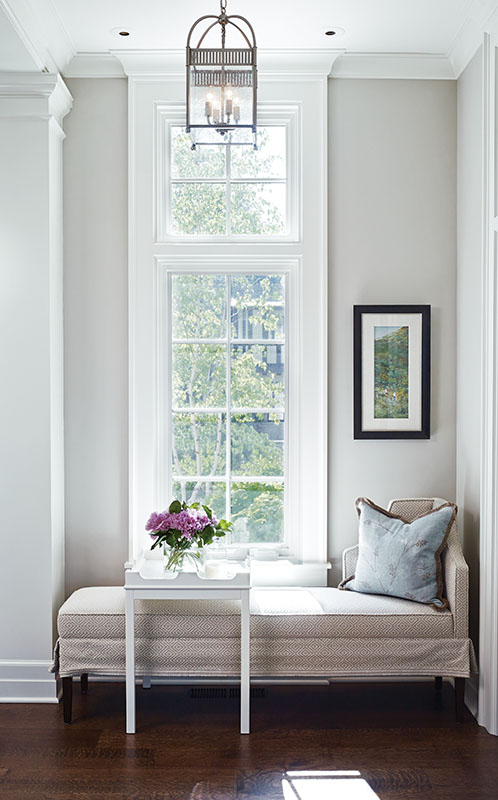 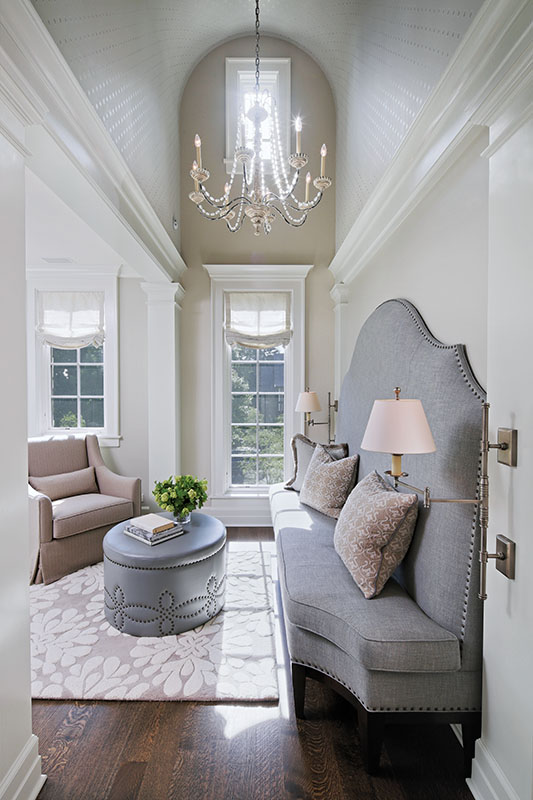 A Mid-Century Kitchen in Red