This Victorian-era brownstone is deeply appreciated by its owners for its fine craftsmanship and age. “My clients respect the house for the same reasons I do,” says interior designer Deborah Mariotti, a transplant to Brooklyn from Italy. “We were responsible for its continued preservation, wherever it remained authentic. In areas where it was not original, though, we had no doubt that we would design contemporary space. It wasn’t even a question.”

An architect in her native Italy, Brooklyn-based Deborah Mariotti has worked as an interior designer since moving to the U.S. in 2005. On this project, a 19th-century brownstone in a historic district, she collaborated with clients raised in northern Europe. “We share the preference for preservation, and also the delight in juxtaposition,” Mariotti says.

“I would never delete history that has survived. In Italy we have so many historic buildings, but we are used to integrating contemporary design with the old. The dialog between new and old is always interesting.”

To a great extent, the house was a time capsule. The previous owners—for about 40 years—had taken very good care of it. But some major repairs were needed, and systems had to be brought up to code. New plumbing and HVAC have been carefully integrated and hidden.

The original façade, staircases, woodwork, mantels, mouldings, and most of the flooring had remained intact. During renovation, a few minor walls were rebuilt to echo the original floor plan.

Paint colors and furnishings, especially, are decidedly modern, if already classics. Bridging the old and new are built-ins that blend with original woodwork, such as a bookcase added to an original arched niche in the dining room. A large entertainment center in the front parlor is not attached to the structure and can be removed.

New finishes are not copies of original material, but were chosen for their decorative and handmade qualities. Figured cement tile, for example, is the backdrop for the kitchen spaces as well as a new laundry room. “The dark pattern really makes the reused antique marble sink stand out,” Mariotti says, “and one hopes it will making doing laundry more fun!”

That historic console sink, with a sculpted marble backsplash incorporating a mirror, was found stored in the basement. The matching sink and backsplash remains in an upstairs bathroom, along with the clawfoot tub. “There’s always an issue of practicality, during renovation,” Mariotti says. “The clients decide how to proceed, because utility spaces affect everyday life.

“In this house, we could afford to keep a bathtub that might not have been practical in a small house or apartment without extra baths. They opted to preserve the old fixtures.” 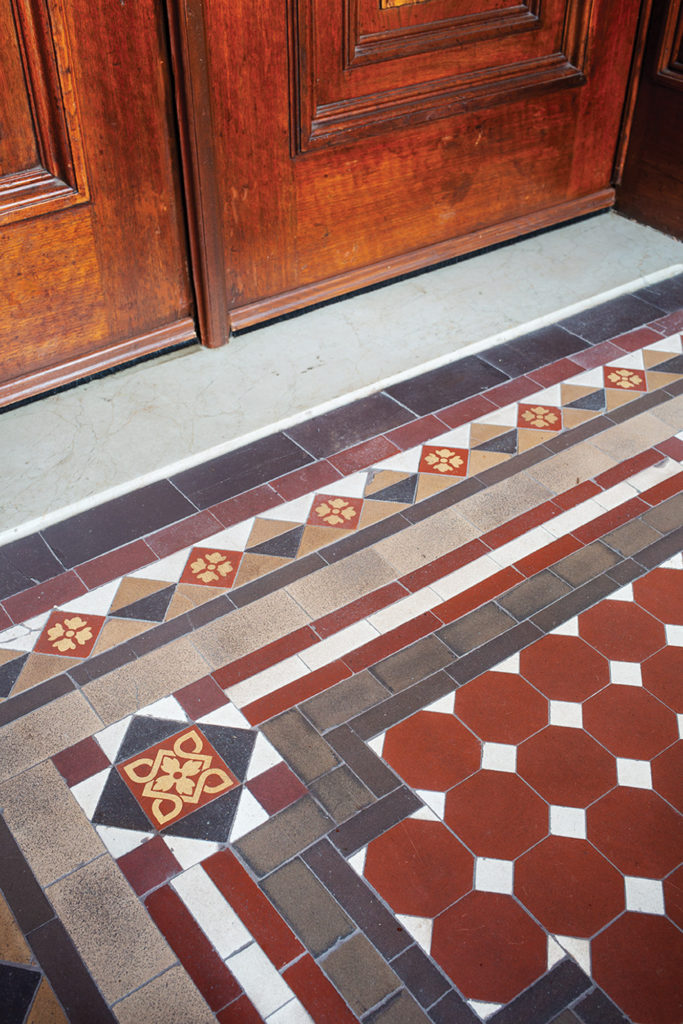 Sometimes you follow the rules. Although the rear extension was unsalvageable, the old construction was part of the landmarked exterior, so it had to be rebuilt in the same style.

The kitchen is the most startling new space. Located in a rear extension, it is sleek, contemporary, and functional. The original kitchen was, of course, long gone; a servants’ area, it would have been located in the rear of the ground floor. The kitchen that occupied the extension when these owners bought the house was a poorly designed 1970s affair, dated and worn. The extension itself was so rotted, it needed to be razed and rebuilt. All reasons to forego any attempt at historical conjecture, Mariotti explains, and instead indulge the desire for a minimalist design.

Oddly enough, the exterior of the kitchen extension looks historic, despite being new. In this landmark district, any work on the exterior must follow historical precedent. Exterior and interior together present another interesting juxtaposition.

For her part, though, Deborah Mariotti would have preferred a new design. Generally, “if something is more than 80% destroyed, I don’t believe in rebuilding it,” she says. “There are so many beautiful examples of this approach, throughout history. If it’s done correctly, a contemporary addition actually enhances the historical beauty of the original. A balanced contrast asks us to appreciate the aesthetics of another era.”

“History is not fixed,” says Brooklyn-based designer Deborah Mariotti. “If design is good, over time, it is possible for things added or replaced to join the historical layers of the house.” In this recent renovation, decorative and handmade finishes were chosen for such permanent additions as floor tile, as these were considered to be in keeping with the Victorian brownstone.

Every authentic fixture in the house was preserved—changing out the good work of the past was not an option. Because the house is large, it was even possible to retain some aspects that might be considered anachronistic in a smaller house. For example, the family elected to preserve an upstairs bathroom with an eye-catching marble sink and the original clawfoot bathtub. In this room, wood wainscoting and antique or reproduction light fixtures were chosen to extend the existing period look.

Elsewhere, new tile floors, practical and subtly decorative, flow into a history that includes English encaustics in the vestibule, without directly copying them. The most playful items—a Delft-tile wallpaper in the new powder room, unusual chandeliers, and of course personal furniture—are easily changed in the future.

“Both the original, permanent fixtures and our additions contribute to the ‘feel’ of spaces,” says designer Deborah Mariotti. “Interior decorating—paint, curtains, objects—is always ephemeral, as it can be changed easily. Nevertheless, in renovation, some items installed become permanent and must integrate with the house’s character. Examples include the new flooring we specified, the built-ins we added, the wainscoting chosen to surround the old marble sinks. Only time will tell if our work is part of the soul of the house. Anything that is not will be rejected in the future and ripped out.”

Modern design for a new kitchen

When it came to parts of the house that had already been destroyed, like the kitchen in the extension, the clients and their designer agreed that they would not endeavor to create a “fake” historical space. “In Europe, we have a lot of very old historic buildings, and we don’t feel the need to re-create a new historical-looking building,” muses Deborah Mariotti. “So maybe contemporary taste is a natural consequence of having grown up in Europe.”

The challenge was to design a contemporary room that would offer a pleasing contrast with the historic spaces. It helped that the kitchen is in a rebuilt extension, not in the midst of Victorian rooms, where the contrast might be jarring.

A kitchen is ephemera, says designer Deborah Mariotti with conviction. “It’s a space valued for its functionality and technology. Therefore it is highly susceptible to obsolescence. A kitchen will never be a permanent part of a house.”