When this mid-century cabin was saved by a remarkable update, it became a much better version of the original. Before, the ca. 1968 house felt dated, not much like an exemplary period piece. Its style-defining windows, past their prime, had trim painted white against dark siding; the uninspired entry was through a screened porch. Inside, the floor plan was beyond awkward. Well-informed design decisions by David Heide Design Studio gave the house new life, but the focus remained on those big windows, its obvious architectural strength. The owners had loved that “outward focus” of the original house, which was served by large expanses of glass done in modern, mid-century configurations. Inside, simplicity reigned, with no distraction from the beauty outdoors, not incidentally making the summer home low-maintenance. While new windows are often the bad actors of the remodeling industry—as when original, proportional, still-serviceable, ever-fixable wood windows are sacrificed for ill-fitting replacements with a projected life of eight to 20 years—this project is a victory. New windows, necessarily specified for additions and new construction, are getting better.

The house in Hudson, Wisconsin, is a summer getaway: built as a 1,000 square-foot, mid-century cabin nestled amidst pine trees on the bluffs of the Saint Croix River. Beloved by the same family for decades, the house had a talent for getting out of the way, says designer David Heide. “For my clients, it was all about being on the river, not creating a fancy interior.” In fact, they may have just left things alone had not a burst water pipe ruined much of the building, necessitating a renovation and, given the opportunity, a modest-sized but critical addition.

The clients wanted a family retreat that would engage the surroundings but not become the center of attention—or add housework. The designers were asked to reconsider the size of the house, how it was being used today, and its aesthetics.

Heide and team had to work within the Scenic River Byway national guidelines, which address sight lines (the house must be all but invisible from the river), materials and colors, lot coverage, and environmental concerns. A small addition, just 320 square feet added out to the side, made all the difference. “It profoundly improved the livability of the house,” Heide says. “Every inch became usable; the house feels twice as big as it did.” The addition also improved the primary façade, adding depth and allowing a more fitting entry.

The next big improvement was opening the kitchen. The original had been tiny, built against a wall that stopped traffic and blocked the view. It had no connection to the living area or the river. The new kitchen, in the same space (but borrowing just a bit from the master bedroom and a bath), is far more functional. An island takes the place of the offending wall. Strong, clean, and simple lines pull the kitchen into the rest of the main living area. Now open to views, this has become a gathering space.

The porch remains, but it has been rebuilt. “The old house had the distinction of having no indoor dining area,” Heide reports. “All meals were taken on the screened porch, rain or shine.” With the addition of a living room, the “prow” now can accommodate a dining area. The rebuilt dining porch, in the same location and more accessible from the main room, is handsome in cedar. Redwood from the original porch floor deck was remilled to build the kitchen island, encapsulating memories of family meals in years past.

“It was important to me, and our clients, that we preserve the mid-century aspect of the house: the large windows that take in the view, the ‘prow’ created by angled window walls,” Heide says. “These attributes are intact.” The addition, for example, intentionally emulates characteristics of the original house. The old house itself was saved, not razed: “There’s nothing greener than reuse,” Heide says. Inside, the attractive cedar ceiling has been renewed and extended throughout the house.

“Mrs. Client loves Modernism—and taupe,” says Heide. “Mr. Client wanted a cabin aesthetic, all wood and stone. We were able to extend the house’s mid-century marriage of natural and modern.” The new fireplace, for example, made use of regional limestone but has a contemporary design. The bluestone floor is laid in a simple grid. On the original wall separating the dining area from the new room, an unusual wallcovering with modern scale is made of actual wood veneer, in greys that echo the stone. New furniture and lighting from mixed sources further the 1960s aesthetic without direct imitation.

Oddly, the house had been built with flat-top windows only; the trapezoidal clerestory in the prow was added later, though decades ago—a necessary improvement in keeping with the style and period. Heide kept the glazing areas and the low awning windows, but he tweaked the proportions, adding heavier mullions. New, double-glazed windows by Pella echo the originals. 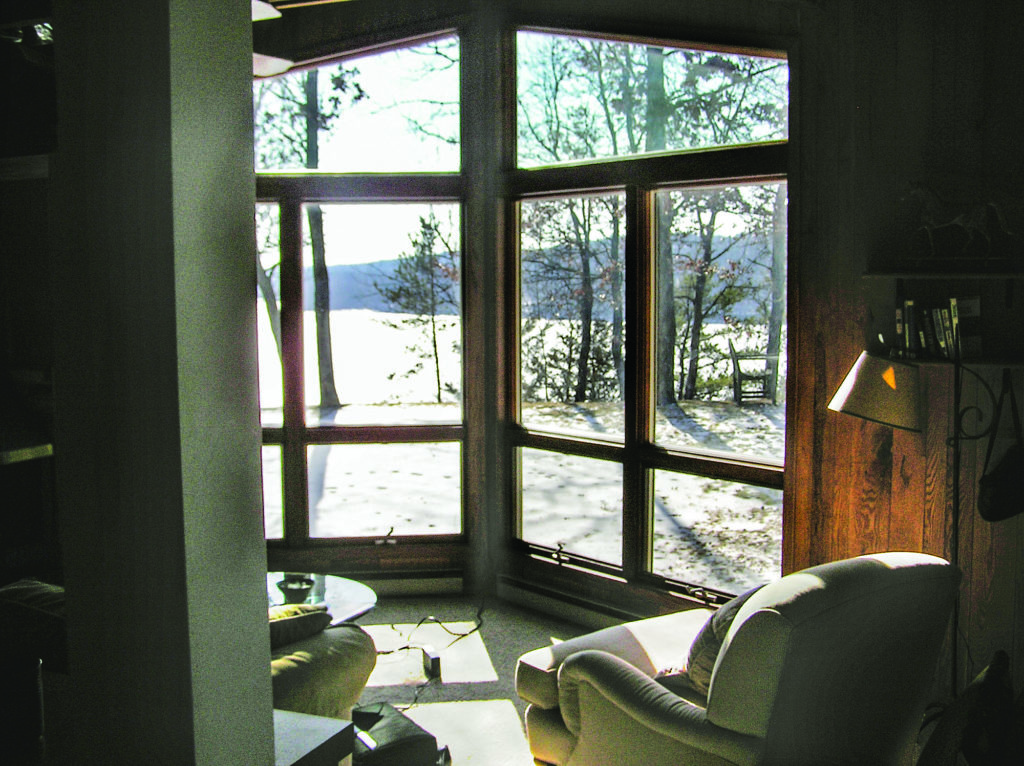 “For years, we’ve typically used Marvin because they offer wood windows and incredible customization,” David Heide says. Other new and replacement windows have left a lot to be desired—but there’s good news. One example: Pella’s recent expansion of their Architect Series wood window and patio door collection. “In-depth research with architects and builders led to new designs,” says Pella’s Heidi Farmer. “This collection gives them extensive design flexibility.” The Pella team also met with the National Park Service and regional preservation groups for feedback on the Reserve line, which offers more authentic details—such things as putty glaze-profile grilles and sashes that reflect historical construction methods, archival butt joinery, engineered vertical through-stile construction, and decorative sash lugs that hide the turn-and-tilt mechanism for easy window washing. Reserve and Contemporary, another line, have the craftsmanship of the Architect series, now with more design and performance options. Hardware, too, has improved, in response to architects reporting that window hardware “can be ugly.” With an industrial designer in-house, Pella is working with Baldwin Hardware to create Classic, Modern, Rustic, and Essential hardware lines with 28 different options.

Materials throughout are simple and elemental—redwood, bluestone. Natural materials, unembellished, combined with easy-care mid-century furnishings,even plastic chairs, make this a true vacation house, one built for low-maintenance upkeep. Now the interior recalls the best of mid-centur y design, having lost the worst of it (plywood cabinets, chattering sliders).

The Right Way to Use Trim in Old Houses

How To Conquer the Brimfield Antiques Show