The 1928 Glenwood stove is the workhorse as well as the visual focus of the kitchen. It is particularly appropriate: Glenwoods were made by the Weir Stove Co. of Taunton, Mass.; and this 1910 house had a kitchen upgrade by its first owners in 1927. “It’s the original 1910 layout, now with updated, late-’20s and early-’30s appliances and bits and bobs,” Berman explains. The stove has six burners, two ovens, a simmer shelf to hold food just below boiling, a warming oven, and two broilers—one of them vertical.

The vintage stove came from the Antique Stove Hospital in Little Compton, Rhode Island, and was restored at the Stanley Iron Works in Nashua, New Hampshire.

In fact, period appliances set the tone and cutoff date for the kitchen. Also vintage is Frigidaire’s 12-cu.ft. W-12 model made in 1929–30. It came from Antique Appliances in Clayton, Georgia. It began life as a sulfur-dioxide unit but has been converted to use modern refrigerant.

All of its hardware is original (except for the conversion element out of sight below). Originally chrome-plated, the degraded hardware was re-plated in nickel to match the Glenwood’s trim.

While Berman says the Glenwood works at least as well as a modern range, look closely and you might spy an under-counter dishwasher to the right of the sink.

“There was never a cabinet in the space,” Berman says; “but there was an early dishwasher, gone before I got here. The appliance is a clearly modern incursion, which I have no intention of covering up—nor do I want a vintage dishwasher.”

The kitchen and pantries remain largely as they were in 1910, when the house was built. A ca. 1930 “kitchen renovation” or cutoff date for the room was determined by the Glenwood stove model, which was sold from 1928 to 1931. Most of the appliances and gadgets subsequently added date to that period.

All of the pendant lights, and the dome light over the stove, are 1900–1910 additions salvaged from a local department store before it was gutted. Checkerboard floors were immensely popular from the 1920s through the mid-1940s. This one was installed 25 years ago during the house’s restoration. It’s Armstrong’s commercial-grade solid vinyl tile.

Most of the serving-ware and utensils also date to ca. 1920–1950. Big green glass bowls and all the Jadeite are 1930s, by McKee. Pottery bowls are McCoy. Depression-glass containers are Hazel Atlas. The bisque-color double boiler and roaster on the stove date to sometime before mid-century.

“I can’t find milk delivery in round bottles in this area,” David Berman says. “So, yes, I decant milk and cream into vintage bottles.”

“Edwardian-era kitchens are very functional,” says owner David Berman. “They have lots of space: a big, open room to work in, and plenty of nicely compartmentalized storage places for putting things away.” His original kitchen suite includes two separate pantries. The butler’s pantry (located between kitchen and dining room), nicely detailed and with a marble sink, has shelves and cabinets for serving ware. The other pantry, on the northwest wall, is for food storage. This room is a mirror image of the butler’s pantry, but without plumbing and with plainer details. It stays cooler than the kitchen during the summer, and in winter it’s practically a walk-in refrigerator.

Berman says he did refinish the wood in the main kitchen, but didn’t have to touch the pantries. (Southern yellow pine in the main room had been painted a strawberry color.) After his initial restoration work, “I put everything back where it was because it was all logical. I have all the storage modern homeowners always complain they don’t have.”

“My inspiration was a family of mice who took up residence in the Hobart mixer bowl one cold and snowy winter,” says David Berman. “I figured if my pantry was going to have mice, they’d best be paper.” His design is similar to one in the Silver Studio collection (U.K., 1880–1962) sold by Liberty of London. 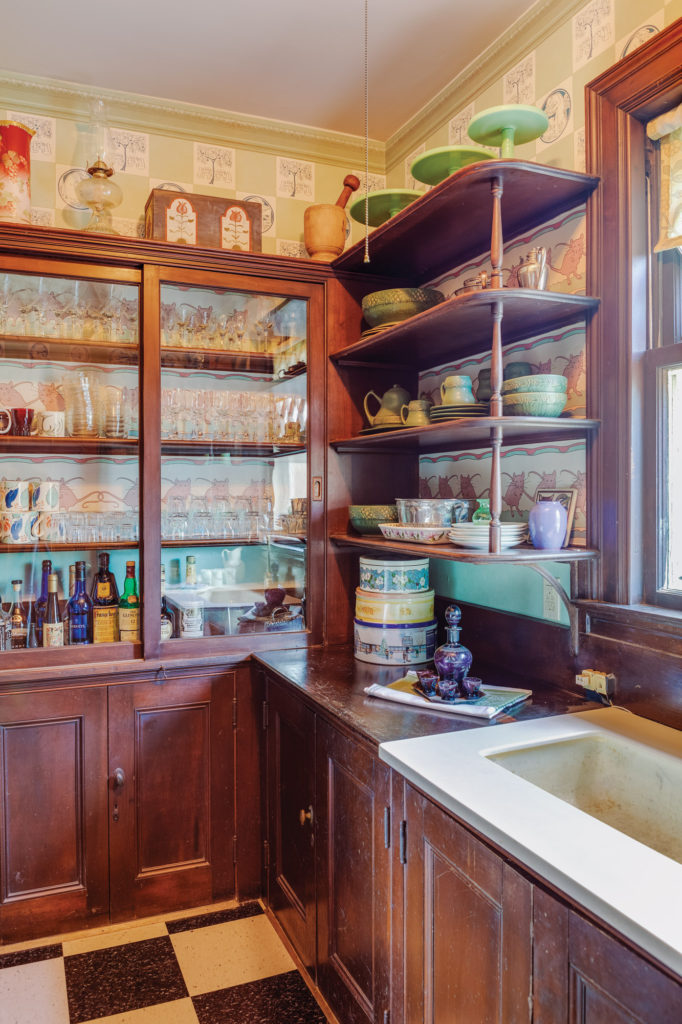 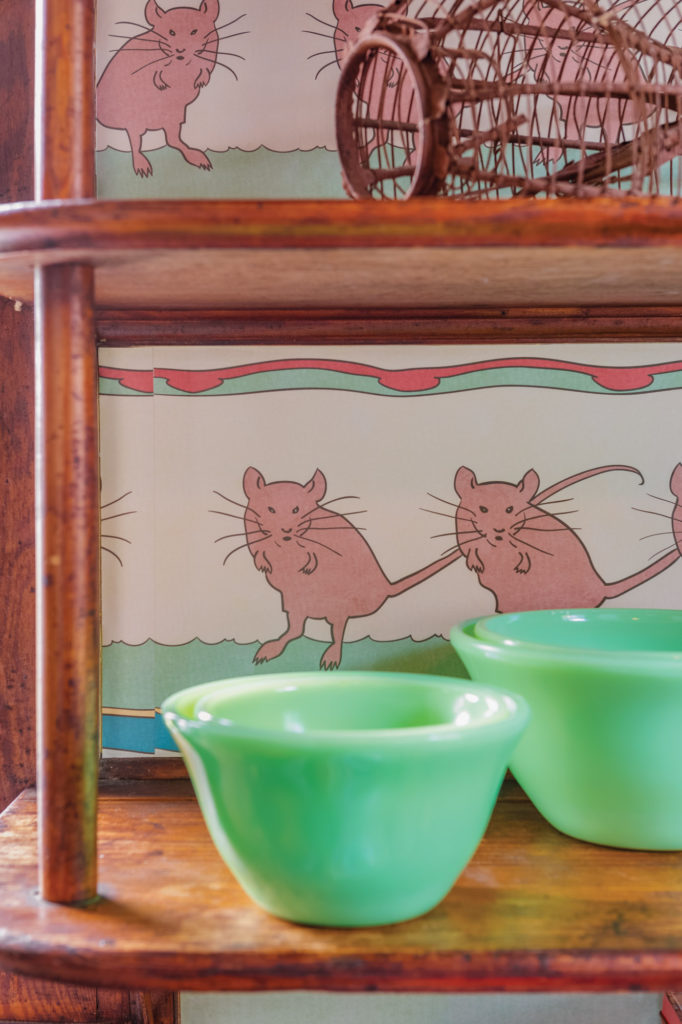 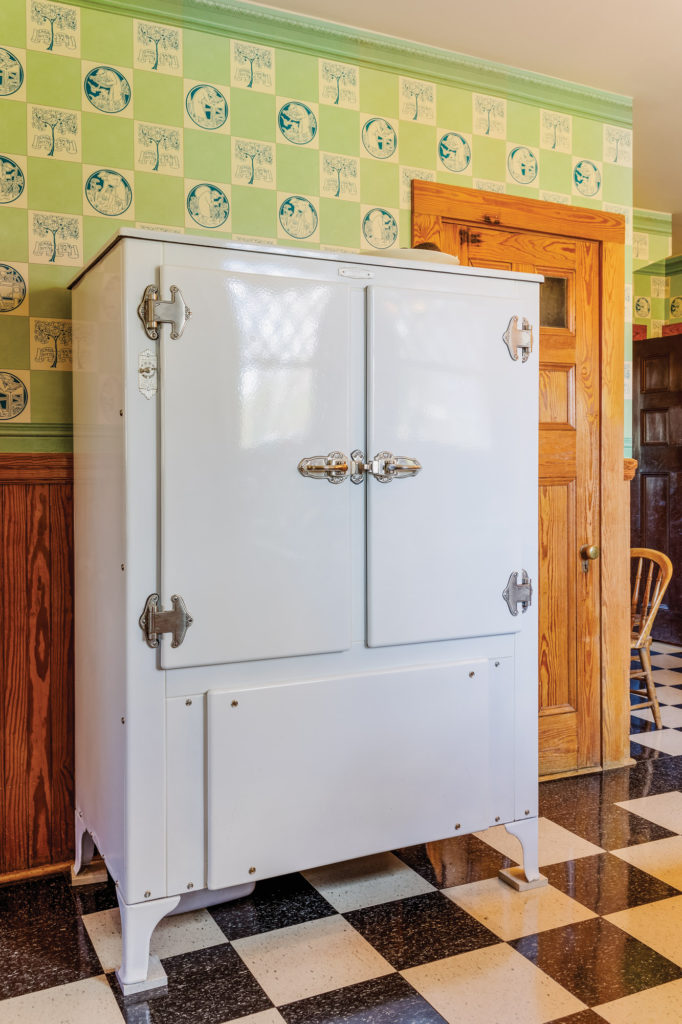 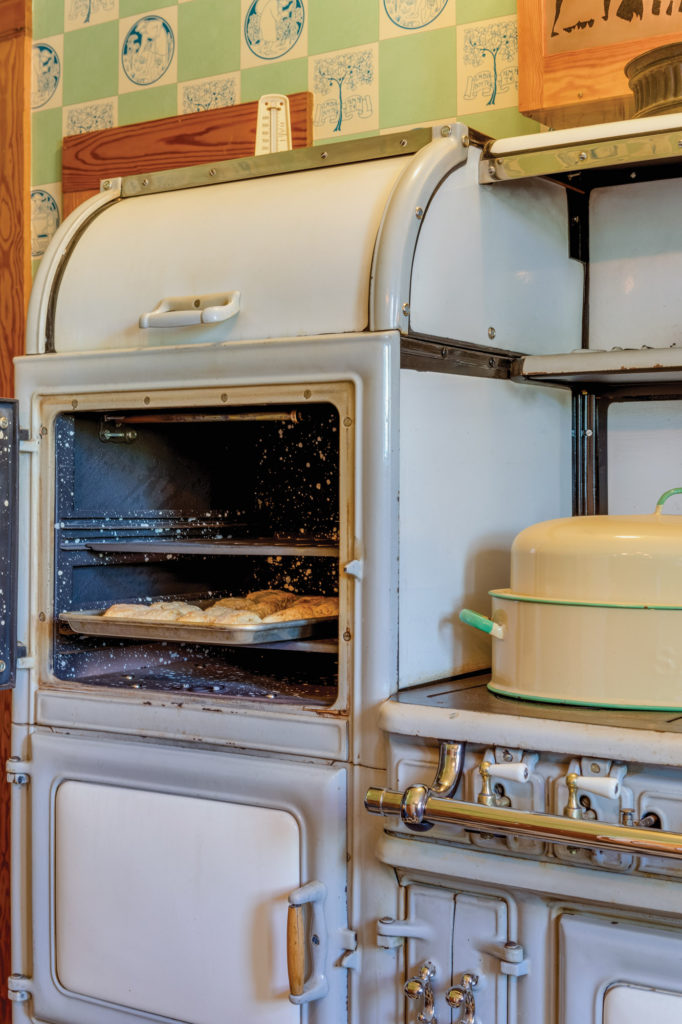