Built in 1922, this semi-bungalow with English allusions survived 90 years with its original kitchen. Small, poorly lit, lacking modern appliances, and cut off from the rest of the house, the room no longer suited modern life. Homeowners Nick Stessman and Toni Dingman wanted a kitchen that would be faithful to the history and original aesthetic of the house, while providing much-needed upgrades and connectedness to the dining and living rooms.

“Initially, we resisted any adding on,” says Toni. “But when the designers presented us with three alternative plans, this plan was obviously best—and it added just three extra feet.”

David Heide Design Studio created a solution that made the floor plan feel generous. Project designer Brad Belka explains that a wall separated the kitchen from the dining room, with only a narrow opening between rooms. The staircase, likewise, was closed. Now everything at the rear has been opened up.

“The main staircase and, below it, a stair to the basement were already there—we removed the wall and installed new treads and millwork,” Belka says. We designed the Prairie-style newel with a pendant motif inspired by houses of the era.” Now the once compartmentalized house has a free-flowing sequence of spaces, with more light.

The back of the house is little changed; the rear entry door was replaced but in the same location. A small alcove behind the stairs—previously nothing more than a closet for recyclables—became a mudroom with the addition of the bench and coat-hanging space. 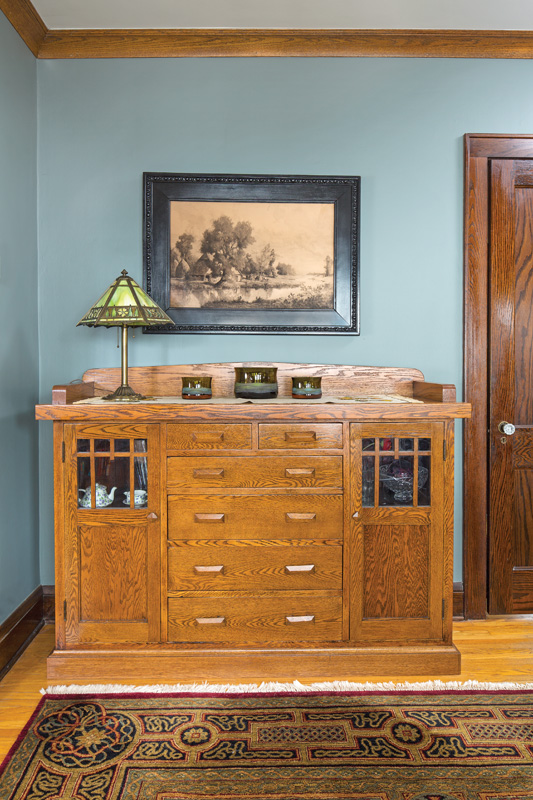 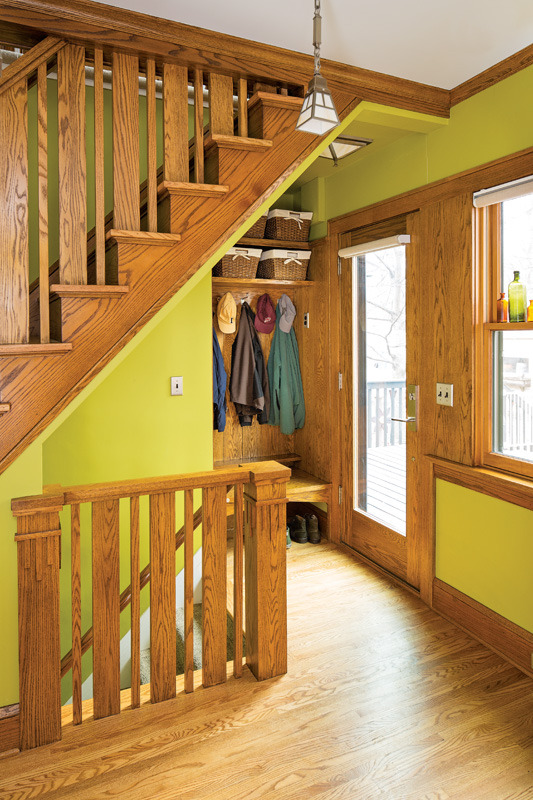 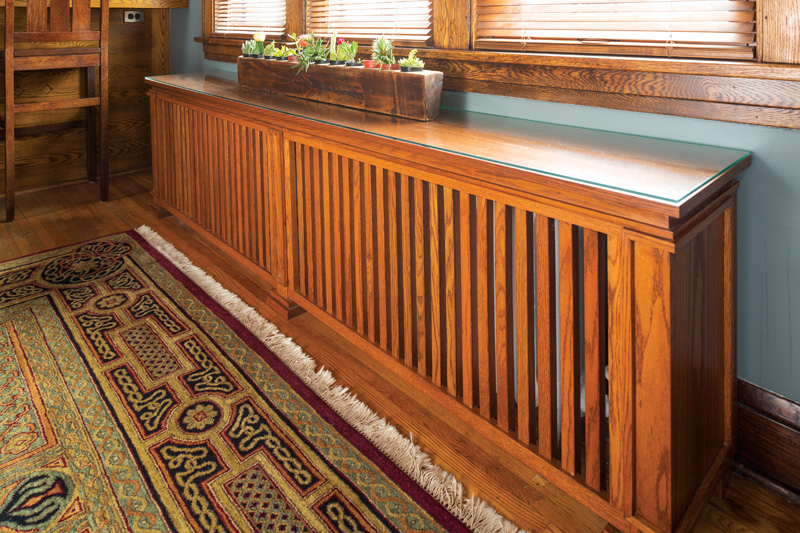 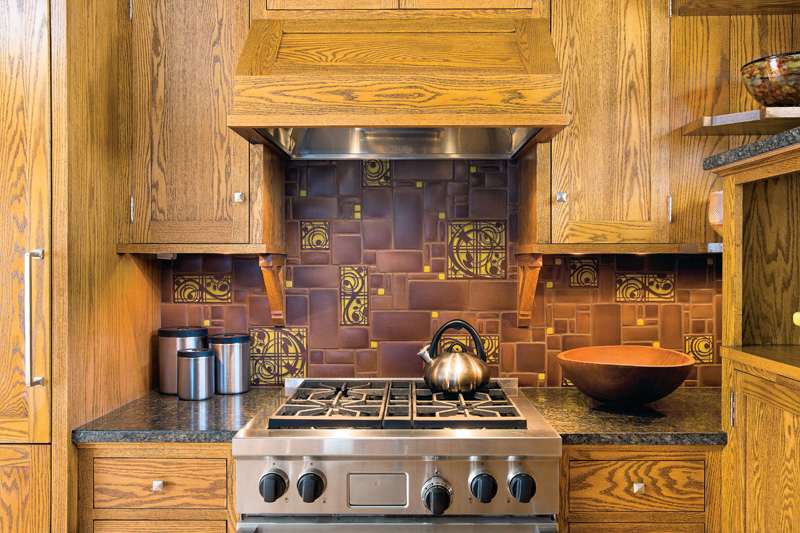 “We worried about removing the wall between dining room and kitchen,” Toni explains, “because there was an original buffet built into it.” The low oak sideboard had been built into an arched niche. The solution?

“We removed it in its entirety,” Belka says, “and designed compatible new side panels and a short ‘backsplash’ to finish it. The buffet became a piece of freestanding furniture in the dining room.” Reissued Stickley Mission furniture completes the period picture on the first floor.

The historic Tudor Bungalow has seen changes over the years; the front entry likely was through a porch, for example. Toni and Nick earlier had removed a deck out front. The fireplace wall in the living room is probably not as built. Nick and Toni installed the stone fireplace surround; a second built-in flanking it may be a project for the future. Before the kitchen project, the owners had finished the basement and put on a new roof. Now they’re talking about calling their designers back to create a master suite upstairs.

About the project downstairs: “We love the results,” the couple attest. “The house is more open…before, we couldn’t communicate between rooms. We can sit in the living room now and be aware of the backyard. The house feels bigger.”

“Most important, we have a functional kitchen that includes a dishwasher, under-cabinet lighting, a hood, a big sink…the tile and the open staircase are bonuses.”

Elbow Room in the Kitchen
A small, cantilevered addition on the south side of the kitchen was all that was required to allow for greater storage, utility, and suitable work surfaces.
Although the addition is a mere 2′ 8″ deep, it allowed just enough extra floor space to make the room work, along with 18″ of cabinet and countertop built into the outside wall, under the bank of casement windows.)

New appliances were thoughtfully integrated into and amidst new red-oak cabinets, which were designed in a simple style. The Craftsman-era muntins in the display cabinets match the pattern in the original dining-room buffet.

The small kitchen is rich in features. Artful tile behind the range is from Motawi Tile Works. Brackets supporting the breakfast bar on the island were modeled after the original brackets seen under roof eaves outside. Dark countertops—Brown Santa Fe granite with a soft honed finish—blend with the tiles and complement the oak.

Pendant lighting adds period style and, hung over the breakfast bar, defines the “wall” between dining room and kitchen. Lighting was designed by David Heide Design Studio and custom fabricated by Lightworks in Minneapolis.