Bungalow-era kitchens from the first quarter of the 20th century were smallish rooms, separated from the rest of the living area, “sanitary” in their use of white tile and ivory enamel. Cabinets were plain, the floor was linoleum, and lighting was utilitarian.

It’s a good model to follow if you are restoring a bungalow kitchen. It’s an easy look to capture, and it’s just as efficient and easy to maintain as ever. Even with the addition of a few extra details, it won’t cost an arm and a leg.

So why are so many people ignoring precedent and choosing high-end, quarter-sawn oak cabinets, mica lanterns, handmade tile, and rubbed bronze hardware for their bungalow kitchens?

For one thing, we don’t use kitchens today the way we did in 1915. Rather than a service room, the kitchen has become a public center of the house, outfitted more like the living and dining rooms. In renovations, the original kitchen is often made larger (perhaps with a rear addition) and is opened up to the rest of the house. At this point, the plain white enamel look becomes the anachronism. Finally, the Arts & Crafts Revival that is in full swing has introduced its own conventions. The beautifully detailed kitchen is one of them.

The idea works for many types of houses, not just bungalows. It’s become the default style for much new construction. It’s also become a standard course for 19th-century houses, because A&C-era kitchens had built-in cabinets, counter space, electricity—all more appealing than the typical Victorian larder and scullery.

The new Arts and Crafts kitchen is based on a handful of materials and motifs, shown here in kitchens that were updated or remodeled, as well as in newly constructed houses. The room starts with cabinetwork, often in oak or cherry and with period-style kicks, door and drawer construction, and furniture details. (Built-ins, window seats, and breakfast nooks all have made a comeback.) Countertops often vary in the room; wood may be used along with soapstone, marble, or tile. Arts and Crafts-inspired hardware is the finishing touch.

Options in art tile today far exceed those of a century ago—it’s so hard to choose! Many people use artisan-made tile as an arresting backdrop for a room that straightforwardly incorporates modern appliances. An artisan-made copper or zinc hood adds textured color and craftsmanship to make the stove (or cooktop) the centerpiece of the kitchen. The use of a stunning antique (a ceiling fixture, a Hoosier cabinet, a Magic Chef stove) lends authenticity even when the room is brand new.

Stenciled or embroidered textiles for windows and table add just the right amount of Arts & Crafts design motifs and an old-fashioned softness. For unbeatable authenticity, many people collect kitchenware from the ’20s or ’30s, some of which is available in reproduction.

In new kitchens of the Arts & Crafts Revival, copper, art tile, naturally finished wood (or painted cabinets with period detailing), stone, and period hardware and lighting come together in a high-quality, artisan-made, warm, and textural kitchen, a room at the center of family life.

Many original features were intact in this 1914 Craftsman house, from the exterior’s bracketed eaves and broad front porch to the quarter-sawn oak beams and mahogany woodwork inside—which had never been painted. Its decorating had degraded over the years, though; downstairs walls were a fleshy pink, and shiny vinyl wallpaper covered stairway walls like a cellophane candy wrapper. 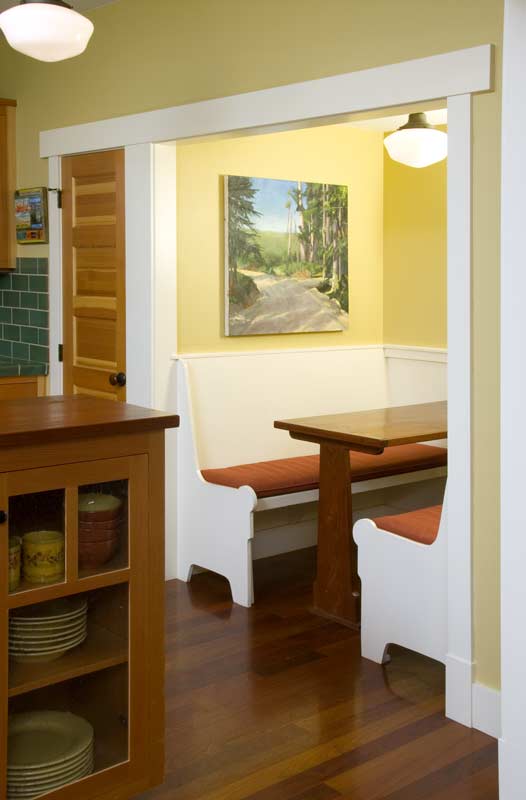 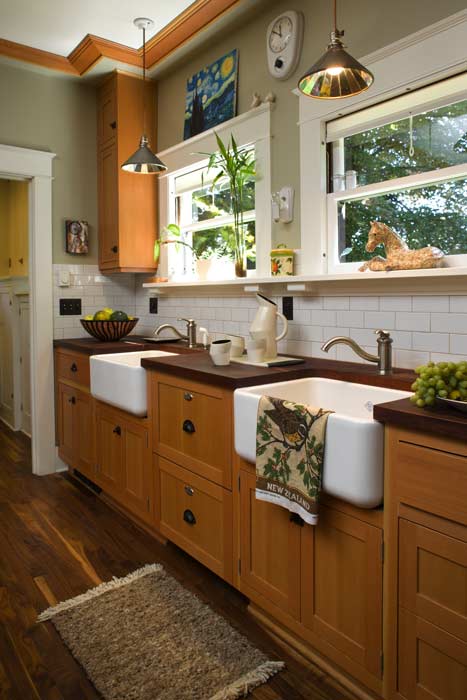 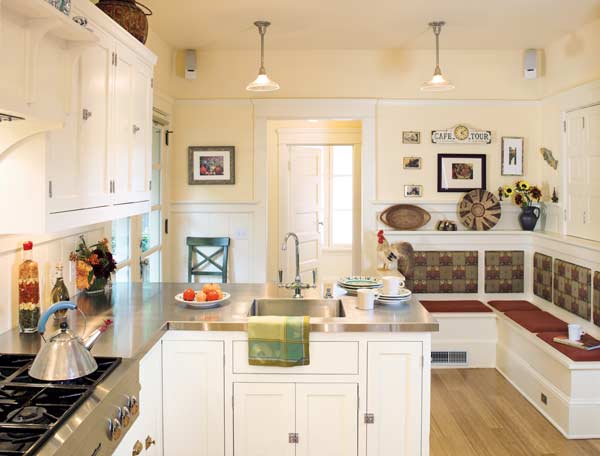 The old kitchen area was a warren of small rooms with black and yellow linoleum countertops ruined by decades of cooking grease. The owners took their time before renovation, patiently learning the rhythms of the house first: how light travels throughout the day, how the family used rooms, where it was drafty, and what all the little noises meant. After two years they knew the house well enough to make prudent and period-appropriate improvements.

They kept the integrity of the floor plan while making the space usable. All five doors remain, and the pantry has been converted into a bar. Period-inspired, custom fir cabinets hang over mahogany countertops and plain subway-tile backsplashes. The flooring is walnut. A built-in banquette by the window provides dining space.

Built in 1911, the house certainly makes a dramatic first impression. Robust and whimsical details of the Arts & Crafts period are everywhere, inside and out. The dining room has a plate rail—perfect for the owners’ collection of Royal Doulton china. The living room retains a handsome mantel framed by bookcases with leaded-glass doors and windows. The owners fell in love as soon as they walked into this “bungalow Foursquare” in a tree-lined historic district of Portland, Oregon.

The couple wanted the kitchen larger and more usable, but still in keeping with the rest of the house. (The room had been awkwardly “updated” with a stainless-steel sink and vinyl flooring glued to the maple strip floor.) So the back porch was enclosed to make space for the expanded kitchen, a pantry, and a powder room. Original materials were saved and reused as much as possible: wainscoting was installed around a new banquette; stained-glass windows on the south wall were left in place, a decision that sacrificed additional cabinet space in favor of afternoon sunlight filtering through colored glass. A clever closet holds the refrigerator, which allowed the swinging door to the dining room to stay in place. 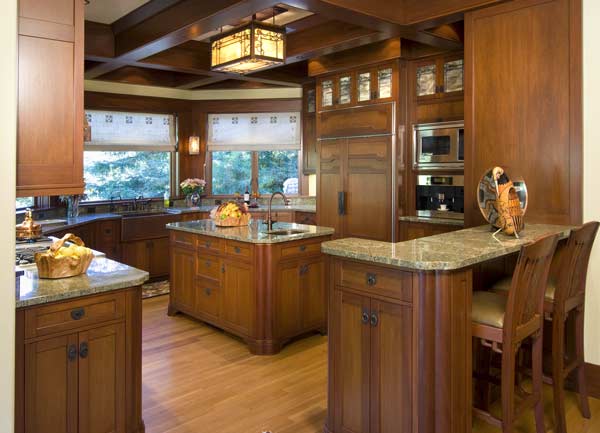 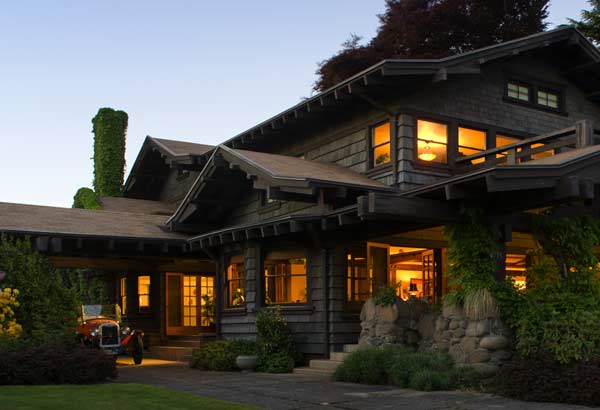 Period-style cabinets were made locally. Countertops are made of soapstone tiles (cheaper than stone slabs) and also stainless steel to mimic the zinc countertops of the era. The old maple floor was unsalvageable, so bamboo flooring replaced it.

Here, an admirer of legendary architects Greene & Greene assembled a contemporary guild to build a new kitchen. It’s in a pleasant, garden-variety, 1980s-era house on a cul-de-sac; the big kitchen was the perfect size to play out a revival vision. The owner, herself an architecture buff, enlisted design consultant and author Paul Duchscherer to work out how to translate early 20th-century design into a 21st-century kitchen. During the Greenes’ time, built-in dishwashers, espresso machines, and jumbo electric refrigerators were still in the future.

The artistic muse for the project was a 250-pound carved stone purchased in Cambodia, now over the fireplace in the adjoining sitting room. This is very much a revival kitchen, not in any way a re-creation, though the owner points out that much of the Greenes’ work shows the influence of the Far East.

Paul Duchscherer made rough sketches, but no formal working drawings were done. Instead, the artisans participated in decisions during construction and finishing. It was a true collaboration. The project took a while—about three years from initial talks to final finish. Almost everything in the room is custom, from cabinet hardware and light fixtures to the unique copper range hood. Perfectionism? When the initial drawing for the hood was submitted, another artisan, a hunter, pointed out that the depiction of a mule deer in the woods was wrong: “not the right habitat.” He counseled an “open, semi-arid area.” Back to the drawing board; the finished repoussé work shows the mule deer in a treeless landscape. 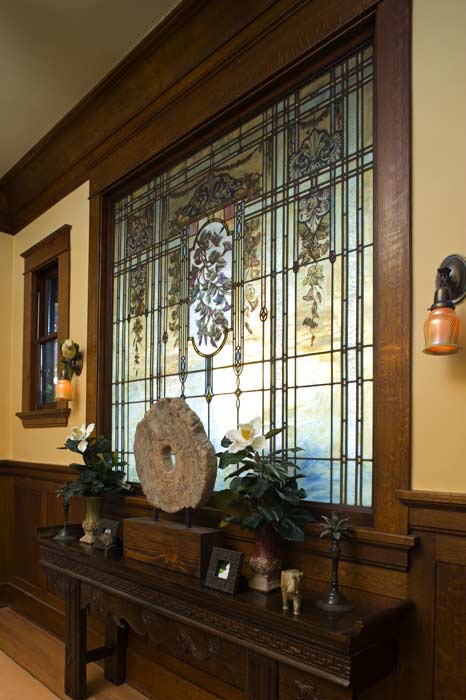 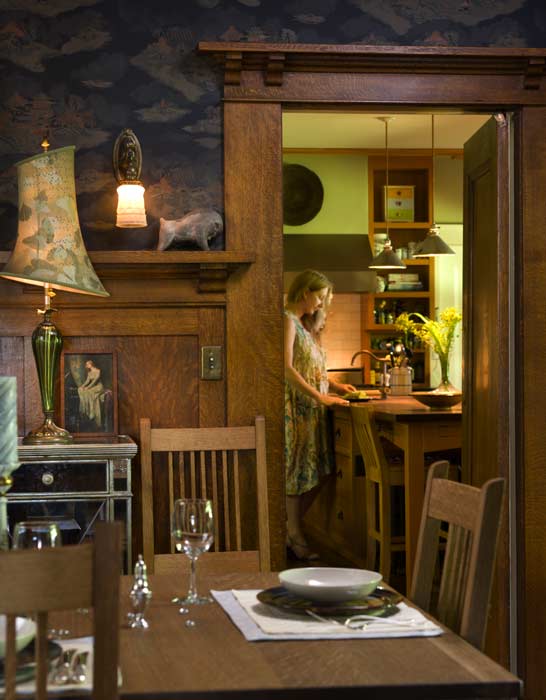