The original kitchen in this 1923 builder’s model home, though it was rudimentary, offered post-Victorian efficiency with electric appliances and even a dishwasher. But that room was long gone. Homeowner Sue Carter had lived with an uninspired and falling-apart 1960s kitchen for 10 years before tackling an upgrade—to a look from the past. Her version is filled with such period conventions as clean white cabinets, a linoleum floor, and a vintage-style stove. Other appliances are cleverly disguised.

Armed with an “idea book” made up of magazine article tear sheets, Sue at first had gone to a certified kitchen designer, who created a contemporary layout. The remodeling was delayed as Sue prepared for her wedding to Bob Low. In the meantime, Sue’s son Jordan met historic-house consultant Karla Pearlstein, and mentioned that his mom wanted to redo the kitchen in her restored house. When Karla visited Sue, she was taken with the beautifully appointed brick Tudor—and suggested Sue start over with the kitchen plan. Karla promised that she and kitchen designer Matthew Roman could create a historical kitchen that functioned like a modern one. 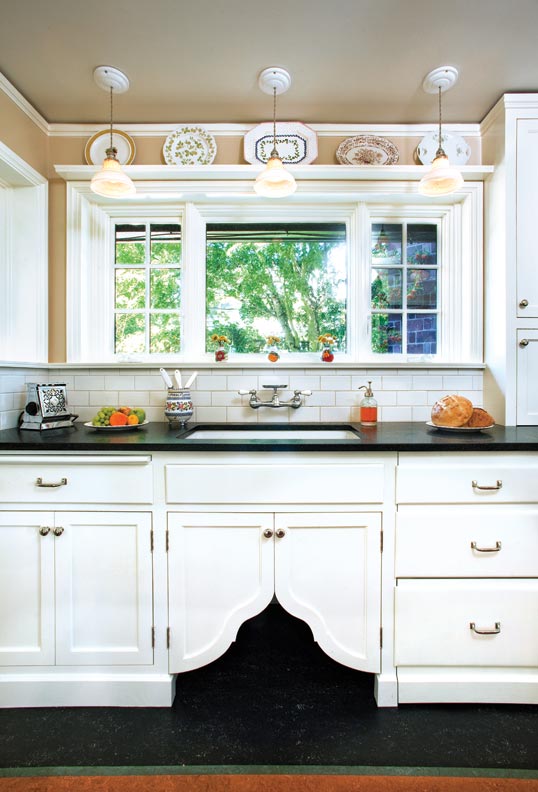 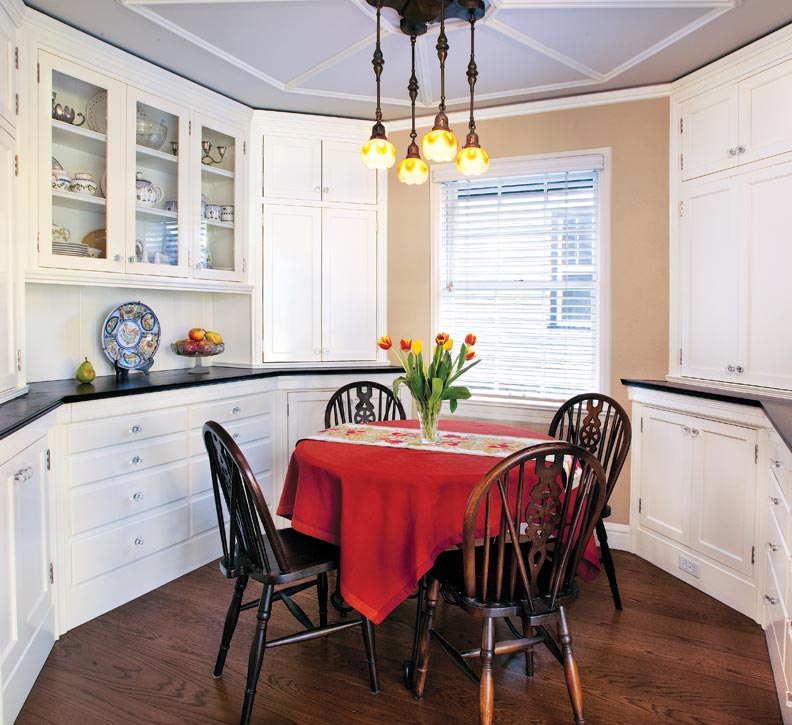 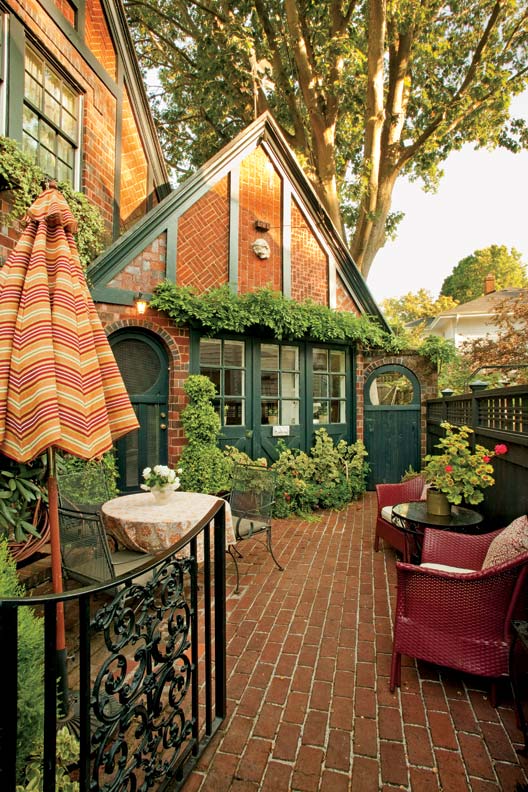 On January 1, 2012, the morning after one last New Year’s Eve party in the 1960s kitchen, the room was gutted. “I hauled away 4,000 pounds of lath and plaster in my pickup truck,” says Sue’s husband, Bob. Soon the cabinetmaker had set up shop in the dining room and in a backyard tent. For the duration, Sue and Bob lived in the basement apartment they’d created. Bob wishes he’d done a better job sealing off the kitchen from the rest of the house: “It looked like Mt. St. Helens had erupted.”

“I knew Bob was the cook in the family,” Karla remembers, “and that he wouldn’t tolerate the fickleness of a vintage stove, so I recommended a reproduction.” Karla was shocked and delighted to find a barely used Heartland 48″ range, with a convection oven and built-in hood, at Portland’s Rebuilding Center. The homeowners bought it sight-unseen over the phone, for about a quarter of its original price.

The designers’ proposal included a walk-in pantry, but Sue and Bob thought it compartmentalized the space. Instead, the breakfast room has lots of storage, and a small food pantry was tucked off to the side. Bob rejected Karla’s recommendation for the countertops: white hex tile. The soapstone he prefers has a natural charcoal color that complements the white cabinets and subway tile; it’s anchored by the wide border in the linoleum floor.

It took a couple of tries to find a plasterer who could apply an antique-plaster finish over the blueboard backing. Matthew suggested creating a “jewel box” ceiling for the faceted breakfast room. Their cabinetmaker, Petr Maschenko, created the ceiling treatment around a chandelier removed from Bob’s mother’s 1920 Craftsman home.

Sue was very involved in all aspects of the work. “She’s hyper-detail-oriented,” says designer Matthew Roman, who modified drawings to suit her meticulous eye. He credits Sue with the fine symmetry of the cabinets, the width of the stripe in the Marmoleum, and the choice of period light fixtures, all of which add balance to the space. As it turns out, restoration of this house—and the kitchen remodeling—started Sue Carter on a new career. She became an interior decorator and opened her own company, Old House Décor in Portland.

The collaborative kitchen design is convincing. As in the rest of the house, archways connect the spaces. To match original flooring, wide-plank, beveled-edge white-oak flooring was custom milled for the breakfast room, which also features wooden countertops. In the kitchen proper, Marmoleum flooring fits the period. Except for one schoolhouse reproduction, the lighting is all vintage. A stained-glass panel allows light to pass between rooms. Although it retains a period look, the whole space has been opened up to the rest of the house and to the garden.

Online Exclusive: See a photo gallery of other white kitchens.