The kitchen was supposed to have been the first item on Doug Taylor’s to-do list after he moved into his 1919 Foursquare in Chicago’s Edgewater Glen neighborhood. He still remembers rounding the corner from the dining room and coming face-to-face with the 1950s-era remodel on his first tour of the largely untouched house. “I was like, ‘Oh my God, this is the worst thing ever,’” he laughs. Not only had part of the space been siphoned off to create a powder room, making the remaining area cramped, but it was crowded with out-of-date appliances and nondescript white cabinets.

But as other projects took priority (namely, upgrading the HVAC system and overhauling a second-floor bathroom), the kitchen redo was put on the back burner. For more than a decade, Doug puzzled over what to do with the space—he knew it needed to be expanded, but he was unwilling to give up the convenience of a first-floor powder room. He also didn’t want to touch the service porch and pantry on the back of the kitchen, which were still in original condition. “Most people probably would have gutted all that,” he says, “but I didn’t want to get rid of it.”

Finally, he hit upon the solution: Realizing that he had no real use for the vestibule leading from the front porch to the foyer, he decided to relocate the powder room there, freeing up the conscripted powder-room space to be returned to the kitchen. He took the idea to neighbor Rick Proppe, principal interior designer at Greene & Proppe Design, who pronounced it doable. Together, they embarked upon the year-long task of returning the kitchen to its early 20th-century glory. 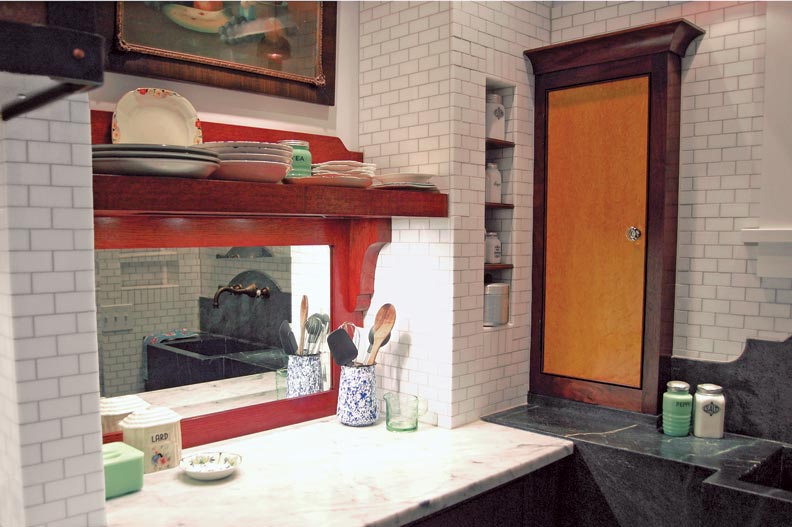 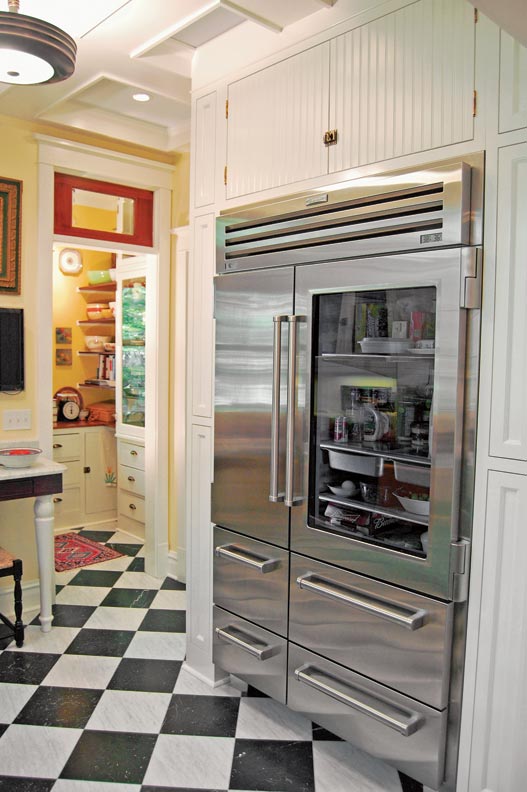 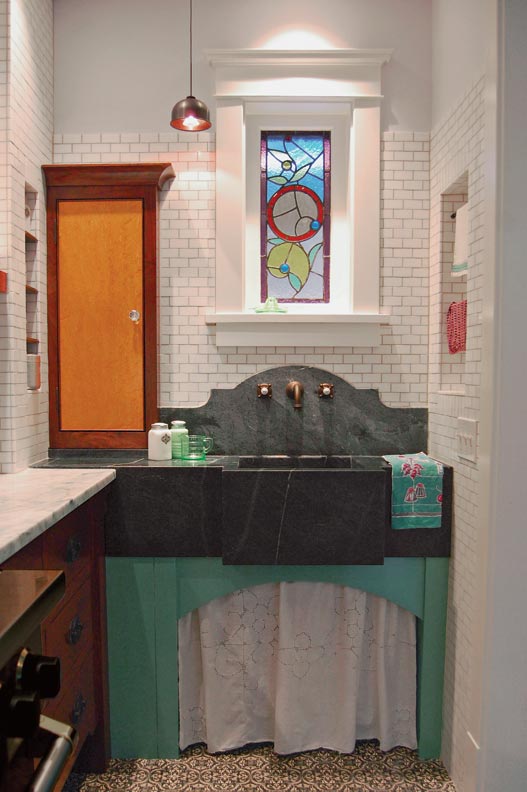 Because he’d had so long to ruminate on his vision for the kitchen, Doug came into the project with, as he puts it, “a long list of peculiar likes and dislikes.” Chief among them was his desire for the space to look like it had evolved over time. “I didn’t want it to be a cutesy reproduction, or something where you walked in and could say, ‘I know what year this kitchen was done,’” he explains. Instead, he sought to blend together a hodgepodge of ideas all rooted in the early 20th century, inspired by everything from his Grandma Iva’s 1930s kitchen to Jessica Tandy’s stove in Driving Miss Daisy.

Initially, Rick and fellow Greene & Proppe designer Paula Flanagan were flummoxed by Doug’s eclectic mix of ideas. “At first we thought, how are we going to put all this together in this small space?” Rick recalls. “We kept saying, ‘Oh my gosh, Doug, this is so much,’” adds Paula, “but he just stayed true to his vision.”

Case in point: Doug knew from the outset that he didn’t want large banks of matching cabinets, so the final design includes no fewer than six cabinet styles. Next to the main sink, a white glass-fronted cabinet with a wood counter was inspired by originals in the pantry; a hutch-style cabinet beside the stove resembles a piece of furniture Doug bought years ago at a flea market. The cabinets beneath the main farmhouse sink (which conceal two dishwasher drawers) were painted teal to match the color that graced his Grandma Iva’s kitchen. “There were so many types of woodwork and cabinetry,” says Rick. “The challenge was how to let some things shine—you can’t have a bunch of stars.”

In the cooking nook (which occupies the space where the powder room once stood), the star is unquestionably the six-burner Viking gas range, which is topped with a custom copper hood designed by artisan Joseph Mross of Archive Designs. In this more utilitarian space, the walls are covered with white subway tile: “Doug wanted the room to be able to withstand any cooking challenge,” Paula explains.

The supporting player to the range is a massive soapstone sink with an integrated backsplash, also inspired by Doug’s grandmother’s kitchen. Getting the wall-mounted faucet installed at the proper height required some simulation from the designers. “Doug referred to it as ‘the chicken sink’ because he wanted it to be big enough to wash a chicken in,” says Rick. “When we were installing the faucet, we actually had a chicken there to make sure it could squeeze under the faucet.”

The main porcelain farmhouse sink represents the only compromise to Doug’s original vision. He initially had his heart set on finding a freestanding double-drainboard sink, but conceded that it would take up too much valuable real estate in the 10′ x 14′ kitchen. So instead, he settled on a farmhouse sink and outfitted an accent table by the back door with porcelain legs. “I figured if I couldn’t have the sink, I could at least have those legs,” he says.

Throughout the space, special niches and display shelves hold Doug’s many pieces of vintage dishware. “Any place there was an opening in the wall, he had the perfect gizmo to display,” says Rick. Perhaps the most noteworthy item—or at least the one that gets the biggest reaction—is the mysterious white porcelain piece that sits in its own lighted niche inside the cooking nook. Given by his grandparents to his parents, no one in the family has ever been able to figure out its original purpose; his mother used it as a plant holder for a while before it ended up in storage and eventually in Doug’s possession. He planned to give the unloved heirloom a place of honor in the kitchen, teasing his family with clues about which prized possession would appear in the design. “My parents laughed like hell when they walked into the finished kitchen and saw that thing screwed into the tile, all lit up,” Doug remembers.

The enigmatic porcelain item still may not have a real purpose (“It’s kind of his little nightlight,” Paula jokes), but in many ways, it typifies the heart of Doug’s design: eclectic and highly personal, but with a lot of history. “It’s not that I wasn’t willing to decide,” Doug says of the mélange of fixtures and finishes. “I just wasn’t willing to do without something that I liked.”

Fortunately, he had a talented design team to help him pull it off. “It really was like a puzzle,” Rick says. “We did lots of 3D drawings to see how the different pieces needed to fit together.” But in the end, says Paula, “it was super-rewarding. It really flows with the rest of the house.”