As a child, Anna Quarum was haunted by the circa 1913 Portland house she now calls home. Growing up right next door at a time when the building was sorely neglected, she remembers how gray and run-down it appeared, and that the owners regularly played pipe organ music, which spooked the area kids.

“It was quite frightening; there were always neighborhood stories about the haunted house,” she says. “I never thought I would live here.” But as an adult living across town with her husband, Merrit, she found that having her own children changed things. The couple decided they needed a house with more room and a nice yard with big open spaces where the kids could run around. So they started looking for an older home—only to find that many of them had lost their integrity to remodels over the years. Not this one. “The interior was almost all original,” Anna says. “That was the selling point for us.”

So when it came time to make the kitchen more user-friendly, maintaining a historic feel was a top priority for Anna. “The idea was to stay as consistent as possible with what would have been done when the house was built,” she explains. To help her carry out that vision, she turned to Anne DeWolf of Arciform LLC. 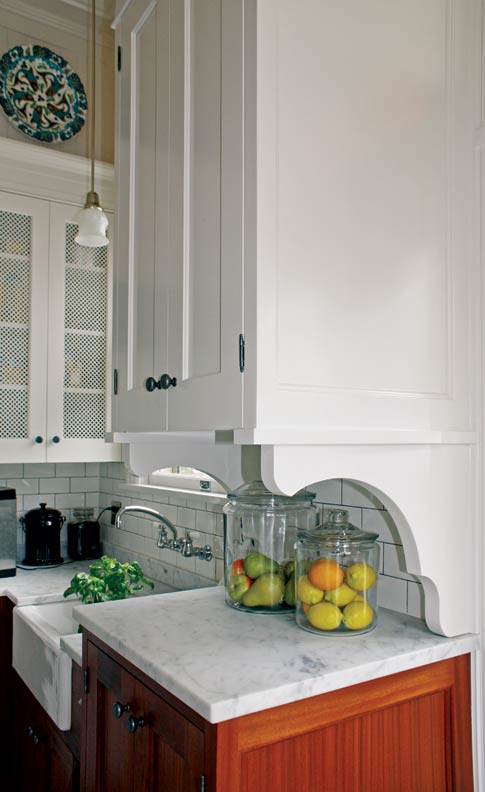 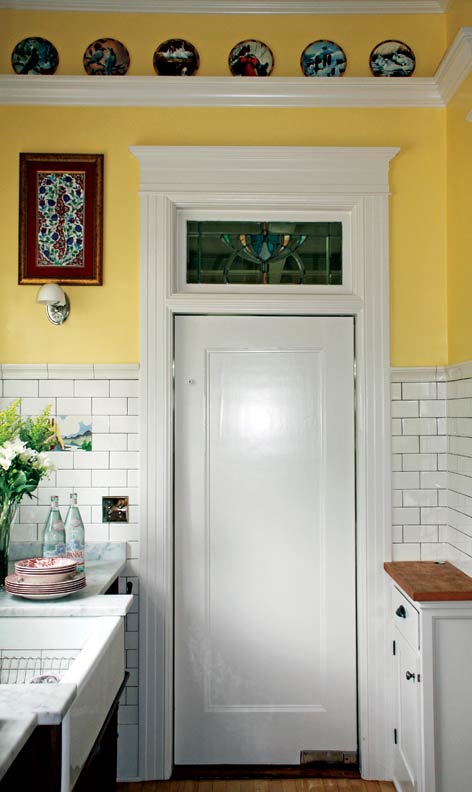 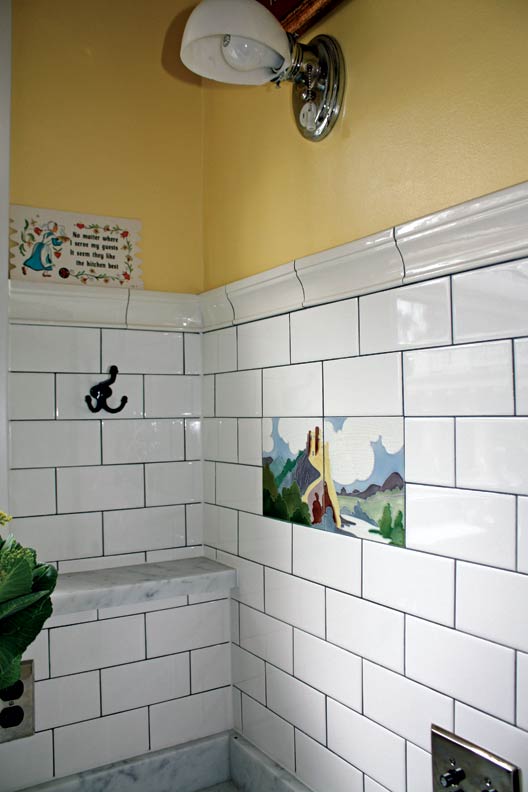 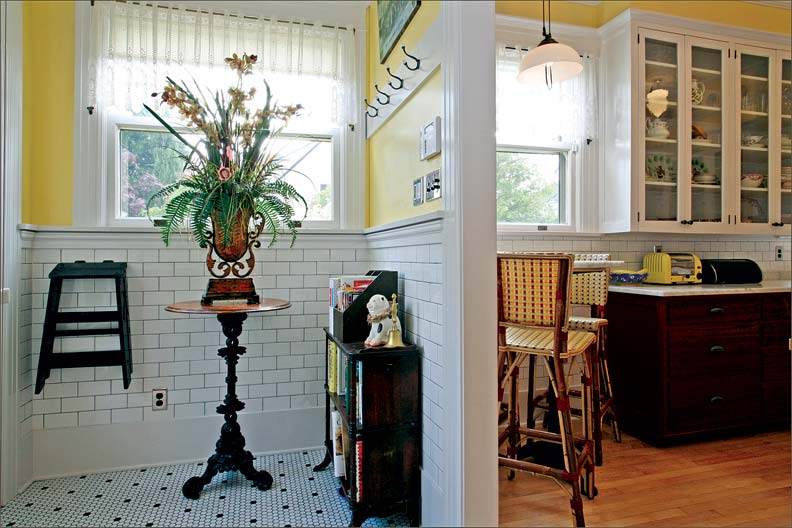 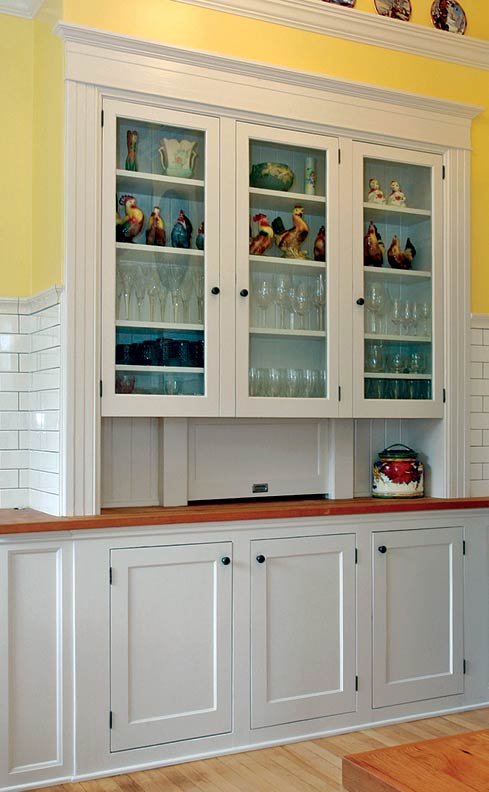 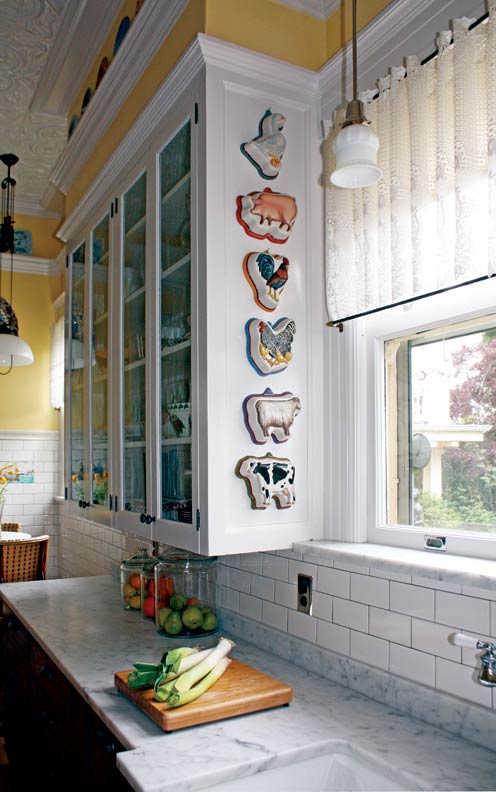 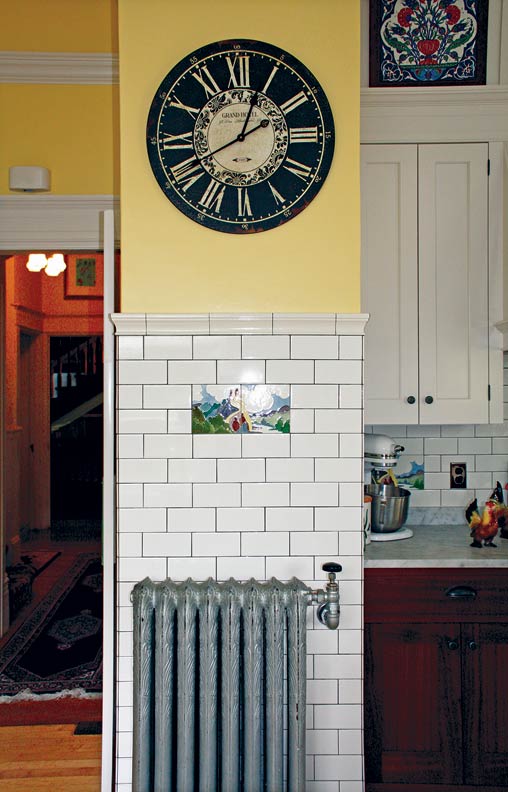 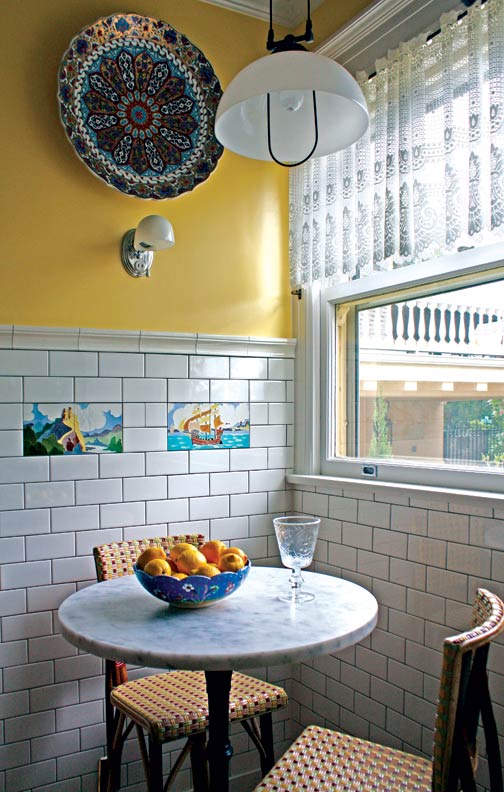 A big challenge to overcome was the use of space. “The adjacent butler’s pantry and the back porch were neither big nor small, but they made the kitchen very crowded,” explains Anne. “So we decided to incorporate those two areas into the kitchen.” Removing the wall between these ancillary rooms—and turning the one that separated them from the kitchen into a wide passageway topped by clerestory windows—opened up the space and flooded it with light. Instead of trying to match the kitchen’s original wood floors, the opened area has hex tiles underfoot, a period-appropriate choice. The tiles are warmed via a decidedly more modern selection—radiant heat, powered by a system of electric mesh.

The overall feel of the kitchen evokes an early 20th-century French bakery, a look that Anna, an avid cook, had admired for years. “I find things like copper pots and French bakery style to be quite beautiful, so I wanted a kitchen like that,” she says. Anne worked to propel that vision in several ways, starting with the grout. “Dark grout with subway tile seems to be common in French bakeries,” she says—and it’s also a practical choice, as it hides dirt. Mixing dark lower cabinets with white upper ones was another design strategy. “French bakeries often have display cases that are stained dark and are topped by white cabinets,” Anne explains. In addition to appearing in a host of boulangeries, the dark lower cabinets resonate with the Honduran mahogany woodwork found throughout the rest of the house.

As part of the quest to preserve as many original materials as possible—a vision both women shared—most of the original upper cabinets were preserved, the maple floors in the main room were refinished, windows were restored, and the decorative 6×6 scenic tiles scattered around the room were painstakingly removed and re-laid in similar locales to accent new subway tile walls. (The original subway tiles were too damaged to keep.) The large, hand-painted decorative tiles bear nautical themes, but their significance to the original homeowners is lost to history.

Another French twist is the subtle layering of textural elements—in this case, different, complementary period details, which add to the room’s rich appearance—from ornate Victorian tin ceiling tiles to cool, classic white Carrara marble counters to dark metal Arts & Crafts drawer pulls. The treatment jibes with the architecture of the house itself, which is an eclectic blend of Jacobean, Colonial Revival, Neoclassical, and even some Arts & Crafts architectural details.

You’d never know by looking at them, but those ceiling tiles were one of the trickier elements to install. “When you use a large-scale pattern, it’s not very forgiving,” explains Anne—especially if you’re working around a centered light fixture, as was the case here. To make the pattern flow seamlessly, Anne’s team increased the depth of the moldings and crown in certain areas of the room, such as above the sink.

One of the room’s standout features is a modest island. Anna, an accomplished baker, had requested that it have integrated flour bins, and Anne looked to vintage Hoosier cabinets for design inspiration. Anna loves the convenience of the substantive copper bins: “I’ve got my flour, sugar, and baking supplies underneath.” Anne jokes, “She’s the only client in 15 years who’s wanted flour bins! Nobody else would want the extra cleaning that comes with them.”

The island’s counter is a bit unusual, too. Instead of butcher block, it’s a flat-grain piece of wood. “We matched the counter on the existing original kitchen buffet,” explains Anne. While the table appears to be freestanding, it’s actually wired to the floor, owing to electrical outlets on each side—a modern-day necessity for a busy hands-on work station.

While the room’s turtle-shade wall sconces are original, Anna found many complementary reproduction light fixtures at Rejuvenation’s Portland store. An exception is the light above the bistro-style breakfast table, which came from a company that specializes in reproduction pulley lights. “Anne helped me find that little pulley light, and we both agreed that it was pretty cute,” Anna says.

Throughout the project, the women often shared a similar vision. “I love my job because I have clients who love their houses,” says Anne. “When the client is passionate and opinionated, it makes for the best design project because they come in with inspirational photos and design elements.” Without a doubt, Anna entered this project with plenty of ideas—she had been collecting them for years. “I have to confess that some of my ideas came from old movies. When I’m watching old movies, I always look at interior features and make note of ones I like,” she says. “Anne and I were on the same track; she made this process really easy.”

Anna may not have ever pictured herself living in this home, but today she couldn’t appreciate it more. “This house is a treasure,” she says. “I feel like I’m walking around in a piece of history every day.”

Tips for Creating a Luxurious Yet Timeless Bath

Retro Kitchen on a Budget