We weren’t house hunting. Ron had a year to go with the fire department in North Hudson, New Jersey. He was reading a real-estate magazine when a snapshot all but grabbed him, and within days we were driving to the village of Saxton’s River, Vermont. The locals call the Victorian Italianate house The Blue Mansion; in two hours it was ours, following a handshake and a binding check for $1,000. That was ten years ago.

Stone abutments on each side of the river are the remnants of a covered bridge that was the eastern gateway to the village. A new bridge went up downstream around 1900; we’re grateful for the quiet. This once robust village that supported several mills now has a population of around 500. Keep in mind the “ain’t” in quaint: there ain’t no banks, no ATMs; ain’t no gas stations, food chains, or stoplights. There’s still a post office but no delivery; you pick up your own mail from a P.O. box during hours. The town was a shock for transplants from Jersey, but we were touched.

Ron is passionate about reviving dying relics, and here he found himself only the third owner of the Alexander Mansion, which was built in 1867. The builder’s daughter Hannah had remained single; she stayed and lived to be a hundred. Before her death in 1969, she picked the next owner from among five interested parties, simply because they loved the house as it was. Thirty-six years later, we bought it from them for the same reason. This time, numerous lookers had toured the house’s 7,000+ square feet only to speed away at full throttle: the house had no real kitchen, a plastic shower stall, an old clawfoot tub. It needed some magic. 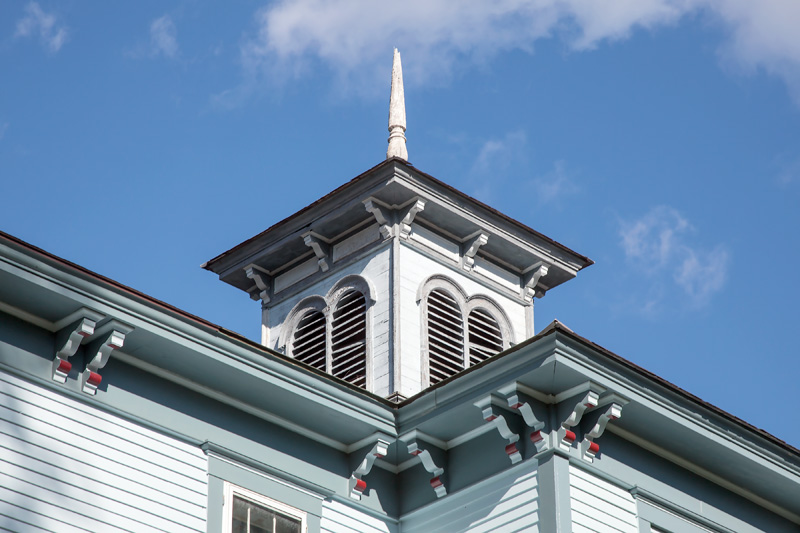 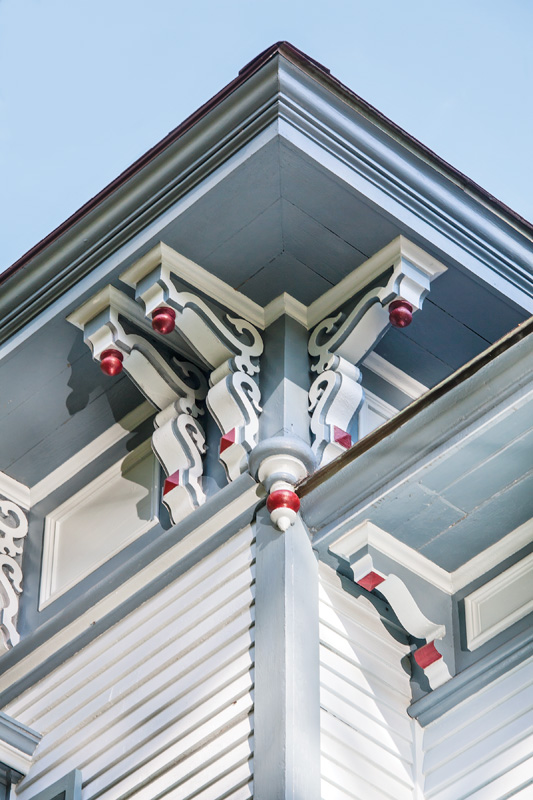 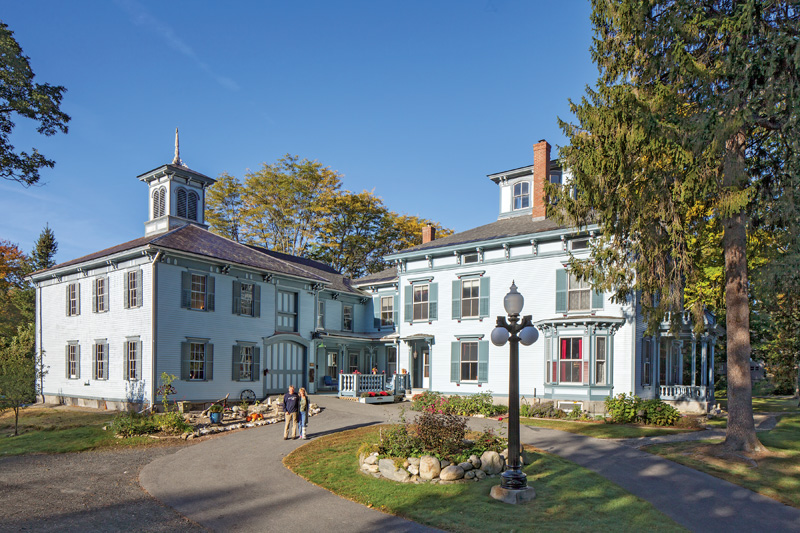 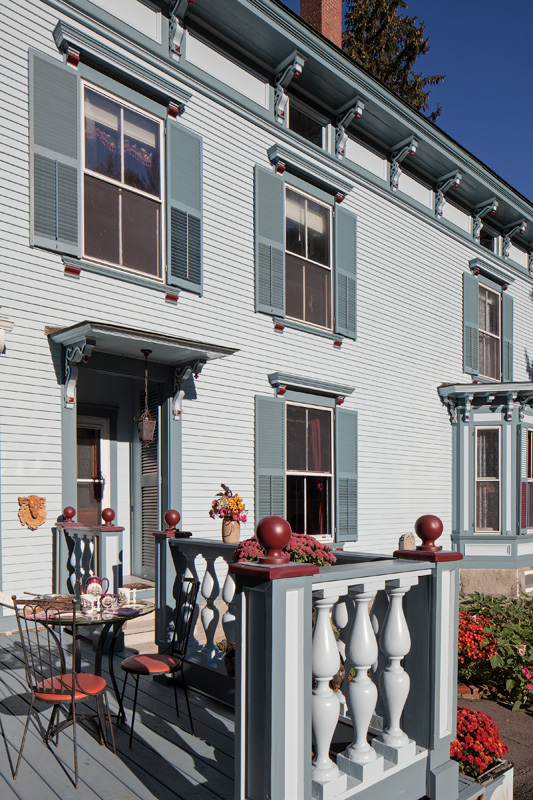 The eldest son, John Alexander Jr., lived in the house with Hannah until his death in 1949. He’d kept a ledger dated from 1915 to 1921. John’s wife (and the baby) died in childbirth. When most people buy a Victorian house, they can only imagine its history. But for us, John Jr.’s elegant longhand takes us to the reality of those days. We still have the desk and chair where John sat to document the daily goings-on. I can touch the desk, the pages of his journal.

As it does now, the portrait of John Alexander Sr. hung from the picture rail in the parlor; when we moved in, it was as if were watching to see what we would do. As it happens, we started in the parlor. Its silver-flocked, deteriorated wallpaper had become an eyesore, the hanging light fixture unsafe, the plaster ceiling cracked. The room was redeemed by crown moulding, a hardwood floor, mahogany doors, and a dirty but original rug.

As he was still fighting fires in New Jersey, Ron hired a local crew to strip failing wallpaper and repair the ceiling. Thus we met Kirk Comstock, who became Ron’s right hand and a true friend. Together they have faced the scary jobs that haunt any old mansion. 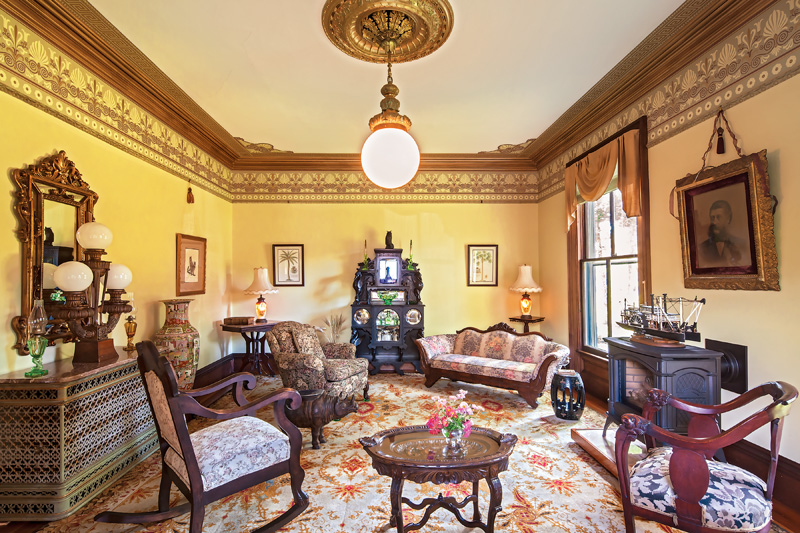 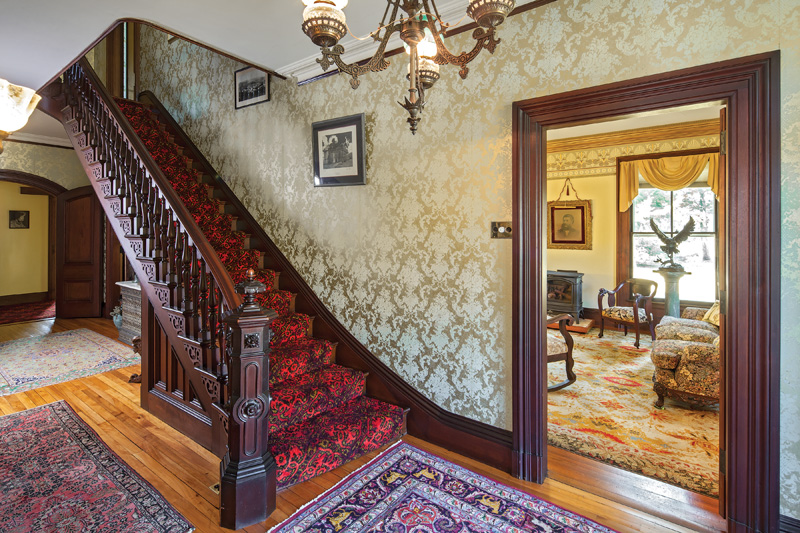 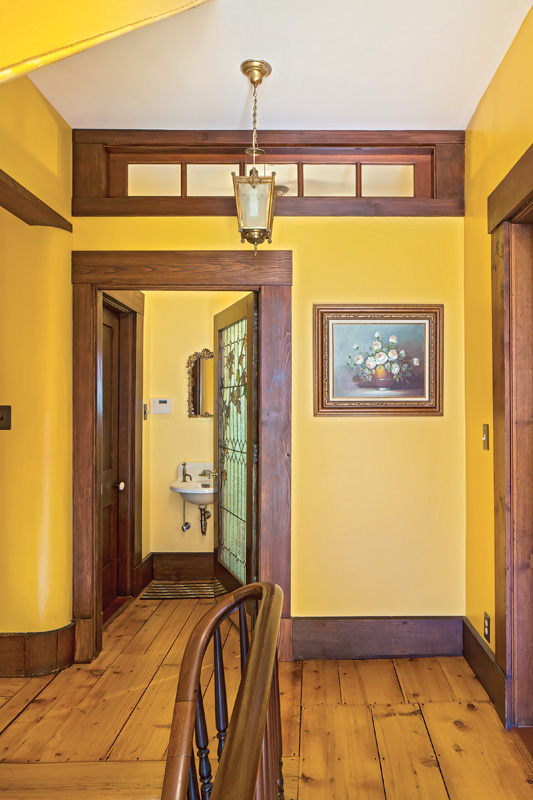 We ordered a Victorian frieze with matching fan ornaments to complement the parlor rug. When the paper arrived, Ron assisted a professional paperhanger. Applying 22-foot lengths of glued, folded paper—after calculating cutouts for three windows and a door—was a nail-biter for the apprentice. Ron has said he’d rather defuse a bomb than paper another Victorian room.

The house was, not surprisingly, a time capsule. We discovered unique treasures: an ancient doorbell that clangs when you pull the glass knob still mounted outside, an ornate cast-iron mailbox that locks with a skeleton key found on a pantry hook, extraordinary steam radiators, the original soapstone sink. Children’s books of the 1800s rested in narrow closets beside a bedroom chimneybreast. The basement houses an 1800s laundry setup and a coal-fueled steam boiler that possibly came out of a ship. This house was the first in the village to have central heat.

Over time, the previous owners dropped by with items they’d found in the house: handwritten receipts for building materials dated 1867, shipping bills from the railroad, photographs of the newly built residence. On June 4, 1867, Alexander purchased 7,536 slate pieces for the roof, totaling $442.35. But the journal remained our most cherished relic.

On December 17, 1919, John Alexander Jr. wrote: “2 degrees in a.m. 10 degrees below in evening. Pleasant.” Vermont holds onto its natural beauty, whatever the temperature; its history and old houses stick to our souls like maple syrup.

A Palpable Past
John Alexander Jr. was just three years old in 1866 when his father purchased the woolen mill that we believe provided uniforms for the Union Army. A year later, construction began on the family’s mansion next door. When John started his journal in 1915, he was 51, World War I was brewing, and the mill had been sold.

John Alexander was director of the Green Mountain Telegraph that brought telephone service to rural Vermont. He also farmed crops including popcorn and ginseng, he sold coal, and he dealt in real estate. He documented daily life in his journal, starting with the day’s weather. One day in 1918, he noted: “John Marlboro and I fitted boards for double doors in basement partition.” These currently open into our gardening room, but what was the room’s use before?

This house has 74 doors…the old journal led us through a door into the past. We learned that the five horse stalls in the carriage house belonged to Ula, Rita, Crystal, Peter, and Glory. We made naming labels. In the journal, I discovered two flawless maple leaves pressed between pages, and a hundred years ago suddenly felt like last fall. I will add two more leaves this year.

Big Project: The Kitchen
Restoration was cued by remains of the past, but creating a modern kitchen worthy of the house was a challenge. We chose a large storage room with a southern exposure; it had shelves on one wall, and a light bulb dangling on Romex from the ceiling. Behind the wall was a three-holer indoor outhouse. We saved the wood piece with its three well-worn holes. With humor common to firemen, Ron said he’d frame three portraits with it.

Two rotting six-over-six windows were replaced with three double-glazed windows matching the old sash, ganged over the 1930s farmer sink we found at an antiques store. We revived the original wood floors. The primitive staircase taking up room got relocated to the hallway on the other side of the wall, still leading to the same landing upstairs. John Alexander wrote on December 23, 1915: “Jim put up shelving in storeroom.” A century later, Ron repurposed those shelves to patch the kitchen floor where the staircase had been. It was a thrifty move, yes, but it also fed into the ongoing story of the house.

The center window embraces a stained-glass piece that I made. Ron created the ceiling insert out of quarter-sawn oak to match custom cabinets by Crown Point. He added the tin ceiling, painting it blue. The chandelier over the table is a reverse-painted moonscape from our house in New Jersey. Besides the old floor, we left one original wall with its rolling door to the sun porch. With its hand-forged hook and 1800s hardware, that door adds character. Because we blew insulation into the porch walls, we can leave the door open, adding light. The once bleak and deserted room now is a haven and gathering place, even in a big house with many rooms and choices for where to be. I tell myself it’s my cooking. 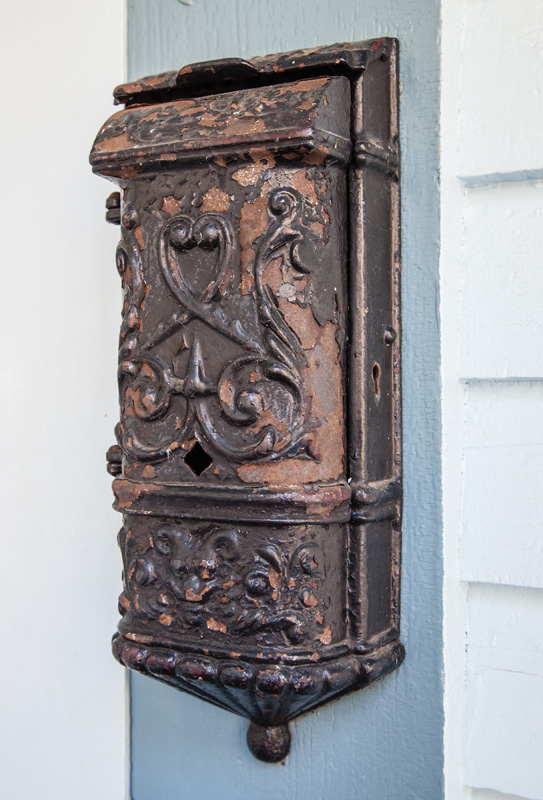 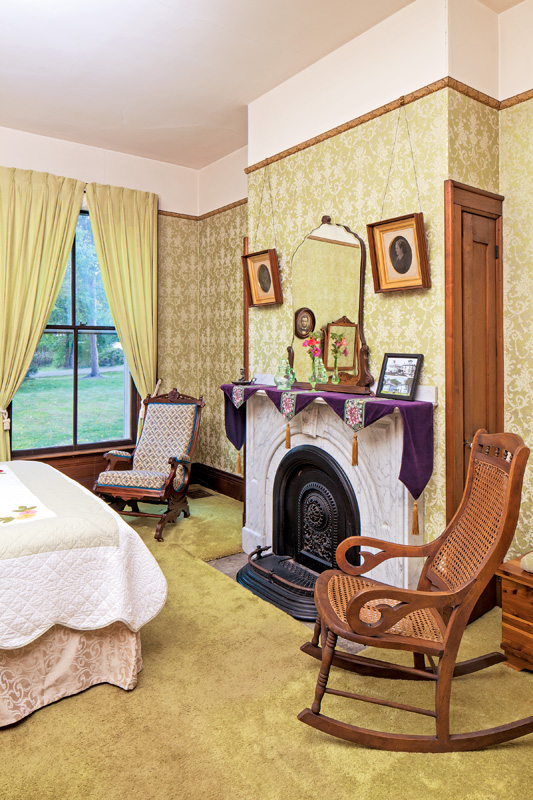 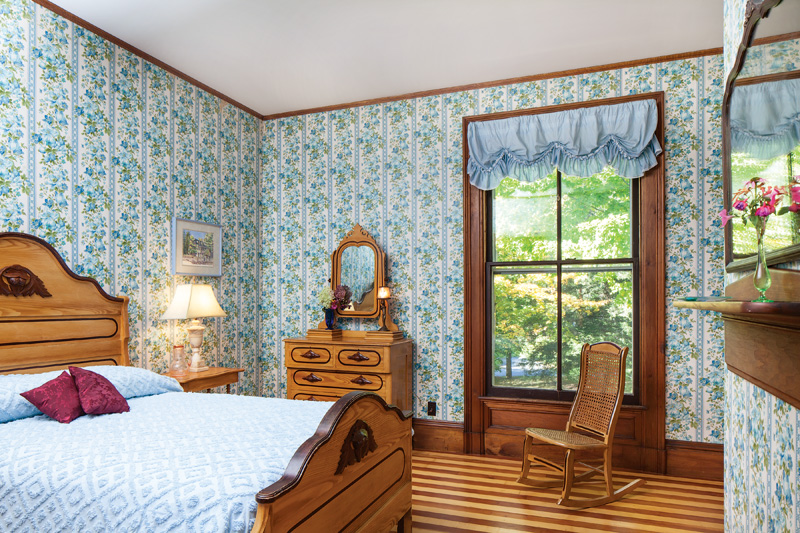