In addition to an overall ambient light source, bathrooms need task lighting over the sink, over or beside mirrors and medicine cabinets, and of course, over the shower or tub. An extra requirement: Fixtures must be rated for damp or wet locations. (A majority of lighting fixtures on the market are dry-rated only.)

Sconces take precedence over pendants and chandeliers in space-efficient bathrooms. They scale better to small spaces, and they’re particularly adaptable around mirrors. Early 20th-century sconces were among the most innovative lighting designs. One early style geared toward handling the damp conditions typical of bathrooms is the porcelain light fixture, introduced in the late 1920s—about the same time porcelain knobs were being used as insulators in electrical wiring. The base of the fixture is coated with the material, and porcelain remained popular through the Streamline era on into the 1950s. Fixtures are typically fitted with “clamshell” shades with Art Deco or Streamline styling; they face up, down, or straight out.

Another innovation was the luminaire, an enclosed, usually fluted tube light with Art Deco design. Originally incandescent and now available as compact fluorescents or LEDs, they can be mounted vertically on either side of a mirror, or horizontally over the top. 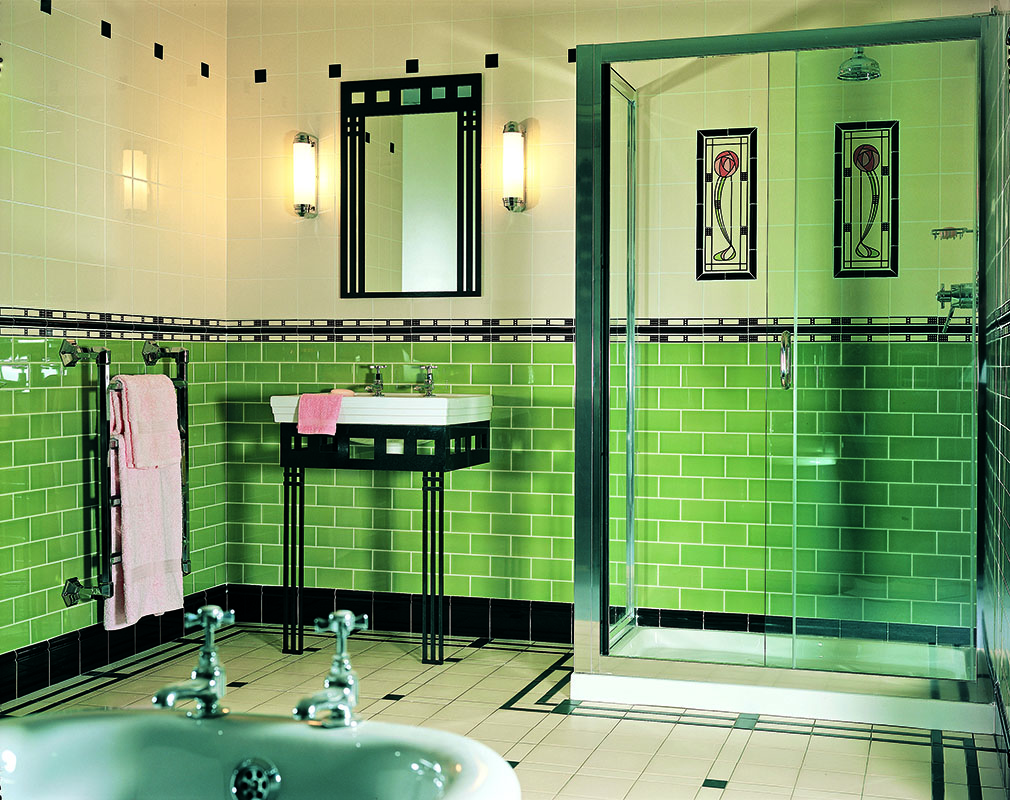 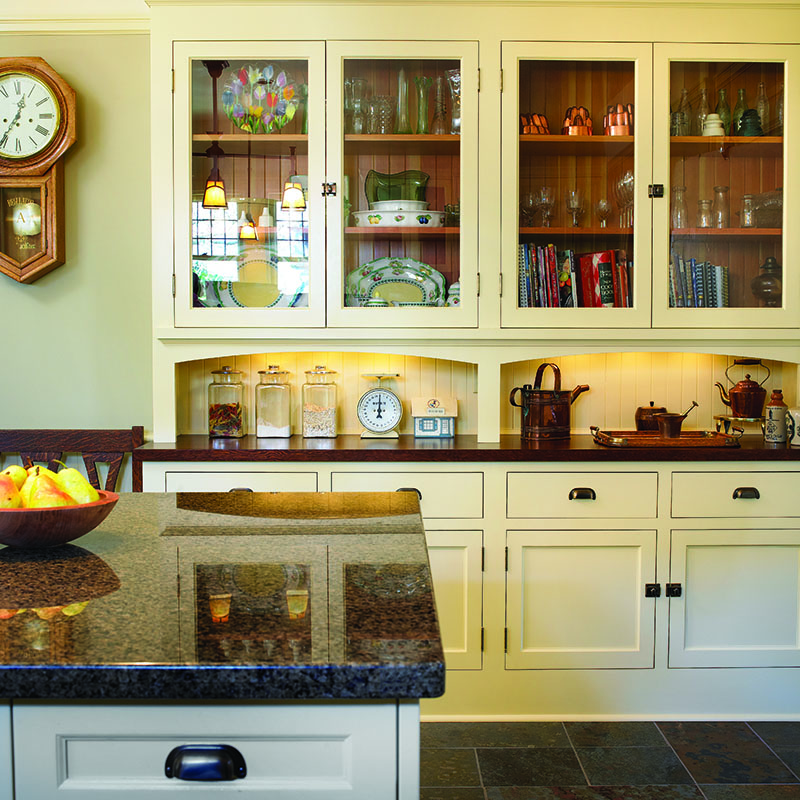 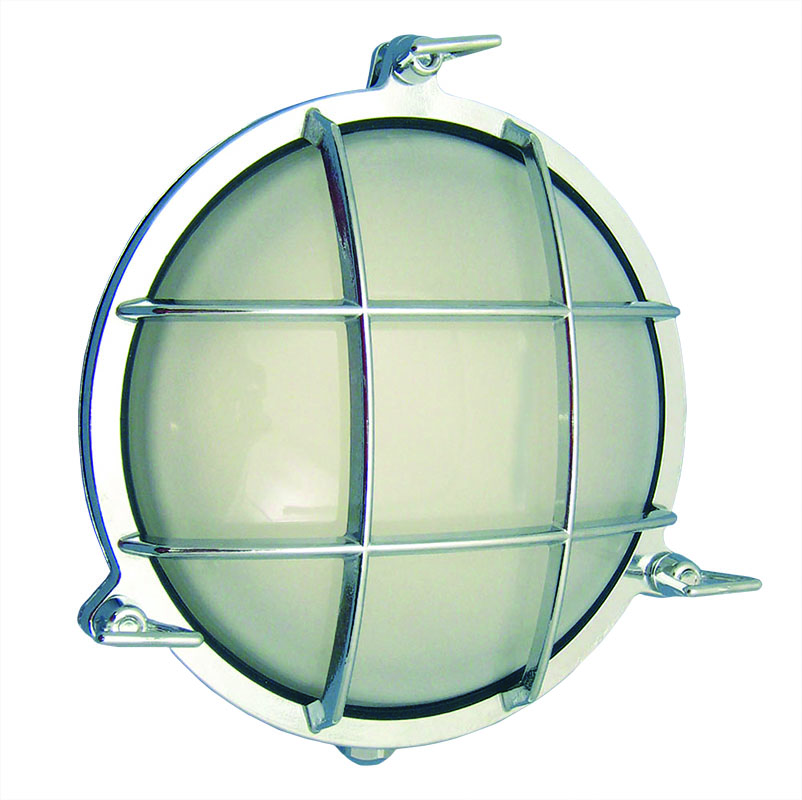 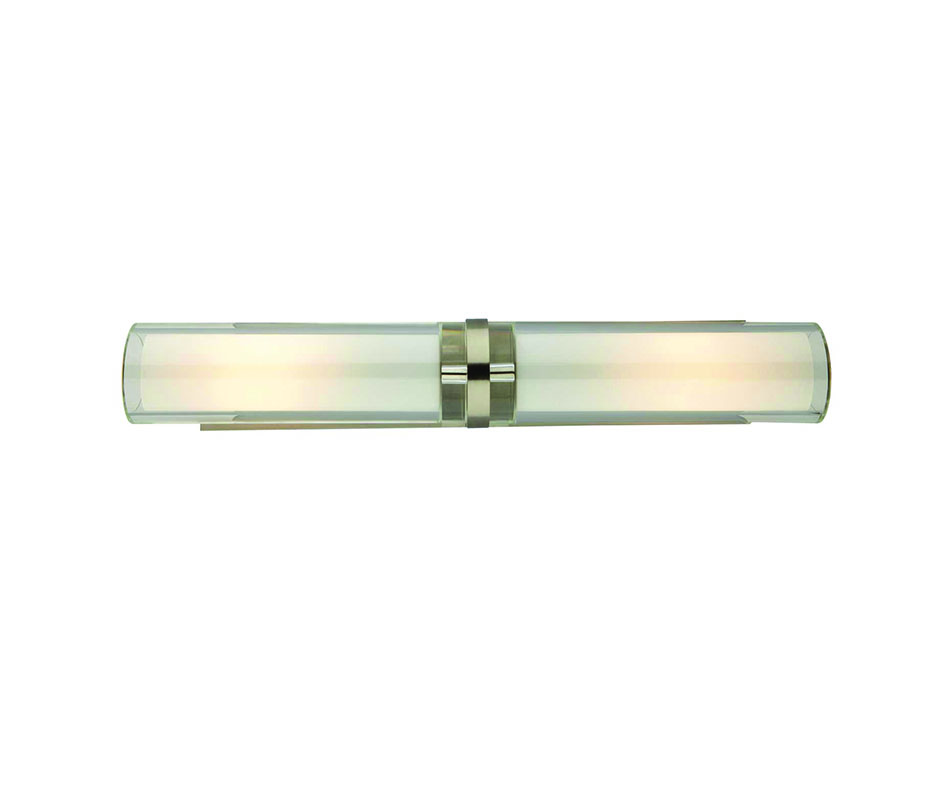 Caged lighting is another industrial innovation that is often wet- or damp-rated. Rugged, early 20th-century versions were “explosion proof” and developed for use in hazardous industries like coal mining, oil extraction, and shipping. The nautical ones are probably most appropriate in the bath.

For a look that straddles the transitional period between gaslight and the electric age, you can’t go wrong with a pair of sturdy bracket lamps in a clean Mission style that retains a few Victorian flourishes. Pair them on either side of a mirror, use alone over a towel ring near the door to a shower, or mount a double sconce over the sink.

How High and How Low?
While the best advice for placing fixtures in kitchen and bath comes from lighting specialists familiar with antique and reproduction lighting, personal taste also affects the degree of brightness and placement. Keep in mind that light intensifies the closer it is to a given surface, like a countertop. A light that’s 3′ above a work surface will provide four times the illumination of one that’s 6′ away.

For islands, the antique and reproduction lighting company Turn of the Century Lighting recommends hanging a fixture 36″ over the surface. In the bathroom, place lights on either side of a mirror between 6′ 5″ and 6′ 10″ high. This puts the light several inches to a foot or so above eye level. Over-the-mirror fixtures should be about 7′ above floor level.

Kitchens need a good source of overall ambient lighting, plus task lighting wherever the work of the kitchen takes place: countertops, islands, over the sink, over the cooktop. (If you’ve got a vintage fridge with minimal interior lighting, it may need external illumination as well.)

With the exception of under-cabinet and over-the-range lighting (see Get LEDs, p. 67), all of these lights can be decorative and period friendly. While a period-specific fixture like a wire-arm chandelier certainly adds ambience to a kitchen in a house built in 1770, it won’t necessarily provide a lot of light. More practical choices include designs based on early-20th-century “electric age” fixtures: pendants, chandeliers, and flush or semi-flush lights, especially those fitted with enclosed shades of various shapes. Luckily, early lighting designers freely adapted styles familiar from Victorian, Neoclassical, and colonial-era lighting, so there are plenty of options.

Many of these fixtures do double duty as task lighting. The pendant, for example, is the original down light. Suspending a series of three smaller pendants by rod, wire, or chain over an island will serve as both task and accent lighting, eliminating the need for recessed lights over this major work surface.

Pendants work just as well over the sink, as do flush and semi-flush mount fixtures. Many of these lights come with a choice of period-inspired shades in a variety of shapes in opal, frosted, or clear glass; painted glass with alternating bands of stripes, from ribbon-width to pinstripes; and ribbed prismatic glass. Configure them as a low-voltage monopoint with LED pendants, and you’ll reduce energy costs dramatically as well. (Since the monopoint fitting requires only a single junction box in the ceiling, you’ll also disturb less plaster.) 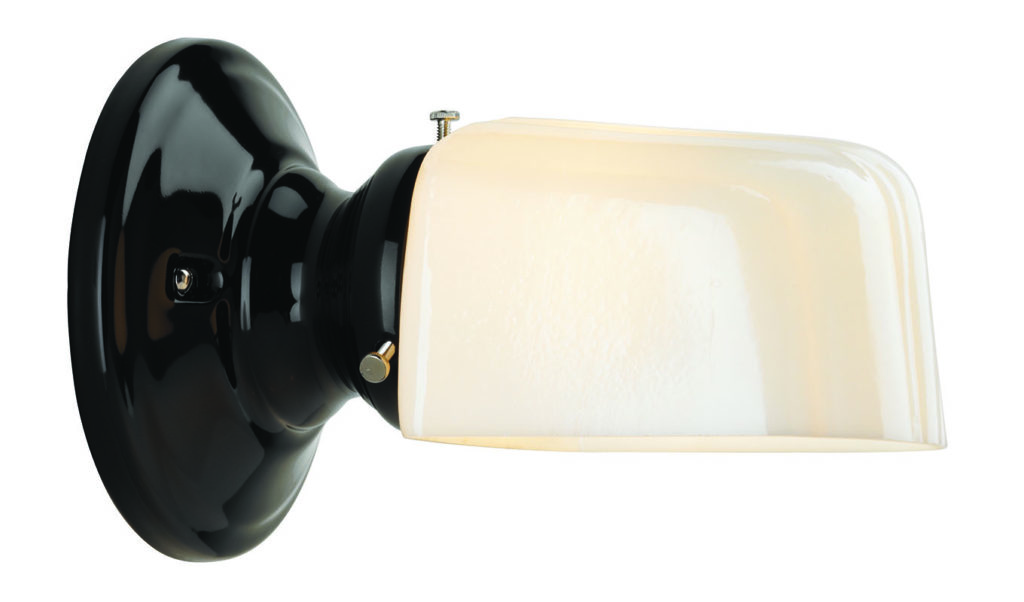 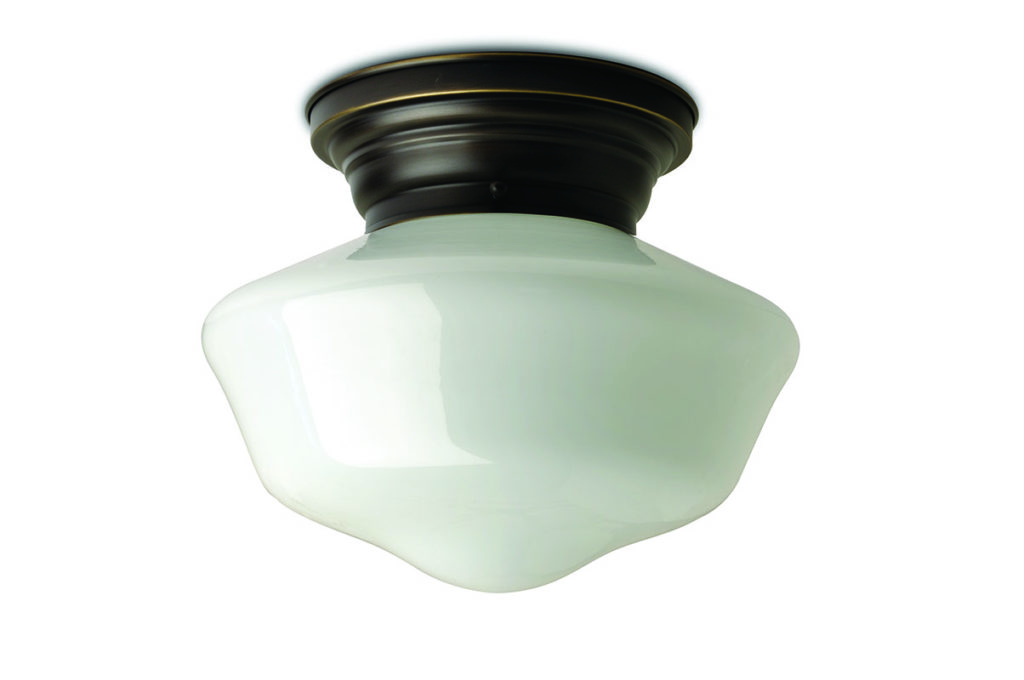 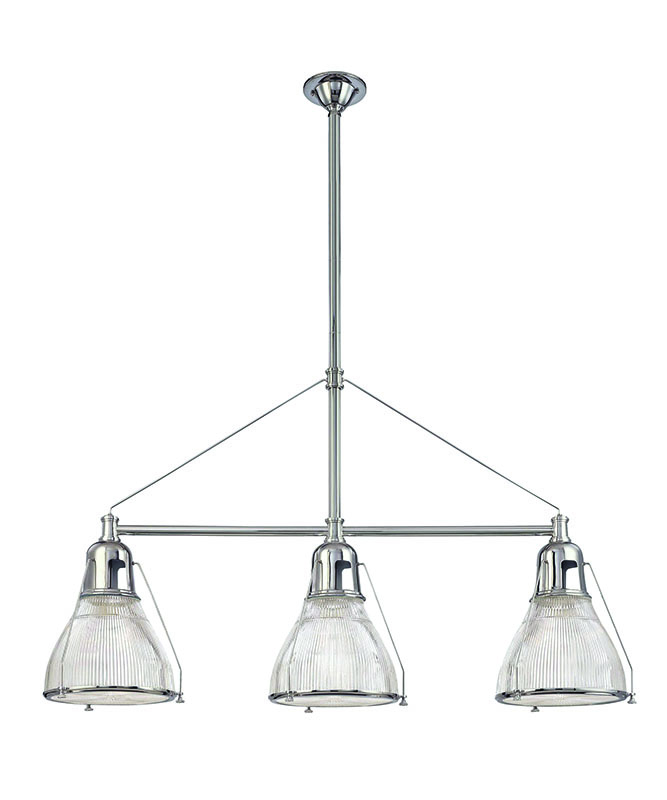 Made in great numbers by the Holophane Glass Company for use in early 20th-century factories and stores, prismatic fixtures were scientifically designed to direct light where the client wanted it. They also diffuse light upward, creating a pleasant, brightly lit atmosphere.

Another option for islands is the trestle or billiard light: a single fixture with a crossbar that holds two, three, or even four down lights. Often both the stem and crossbar are patterned after combination gas and electric lights from around 1900. Since they’re intended to hang lower over the island, shades are often open at the bottom. A cone or inverted bowl shade in white, banker green, or amber is a classic look. An alternative style, also based on period examples, is the pulley light, a single or double chandelier with a counterbalanced pulley that lets you adjust the height.

Depending on the width of the sink area, appropriate lighting might be a single pendant, a flush or semi-flush fixture, or a pair of sconces over a single-bowl sink. While wall brackets or sconces have been around since medieval times, they can be endlessly versatile for spot illumination. Pairing two on flanking upper cabinets on opposite sides of a sink may provide a surprising amount of light—enough to wash dishes by hand, if the need arises. For gentle overall illumination, consider installing concealed LED strip lighting behind cove mouldings attached to the top of cabinets or slightly recessed from the ceiling. These hidden strip lights will illuminate the ceiling and upper parts of the walls with a warm glow that gently reflects downwards. A good lighting designer can help you determine the variables for a desired light level, including how far down from the ceiling the mouldings are placed and the spacing and wattage of the bulbs. 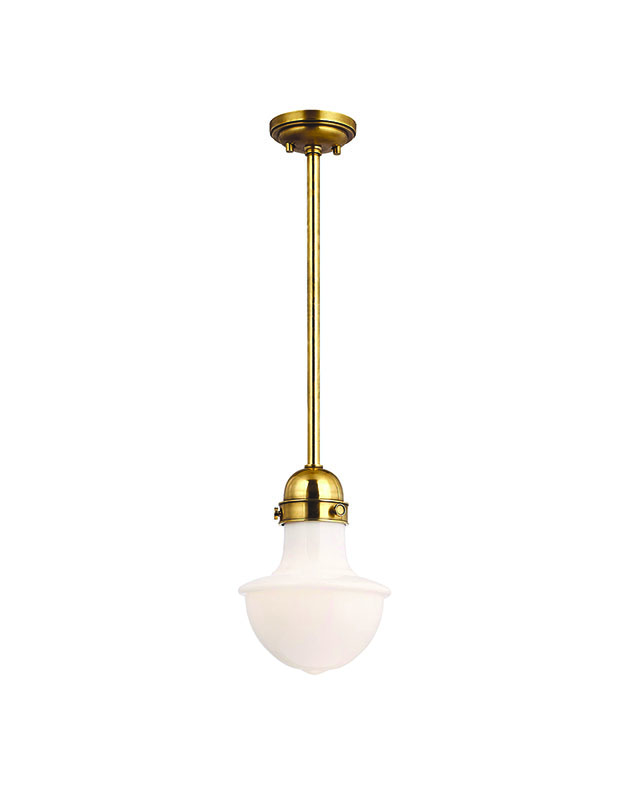 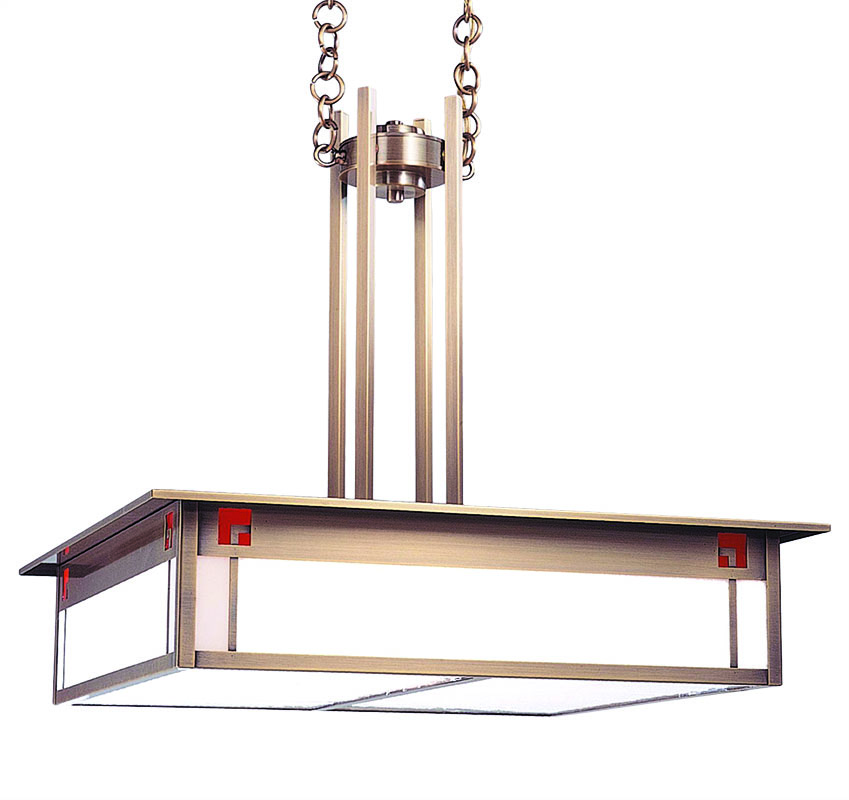 Don’t you just love technology when it’s out of sight? That’s especially true of latest generation of under-cabinet LEDs (light emitting diodes). Not only are LEDs many times more energy efficient than fluorescent or halogen fixtures of just a few years ago, but they’re also much cooler, so the light strip won’t cook the olive oil in the cabinet just above it. (Mount puck styles inside glass cabinets to illuminate dishware or treasured collections.) Other new innovations: LED strips and panels that are compatible with dimmers, and can replace old units that have burned out. Best of all, the new units “daisy chain” into one another, which makes swapping them out a cinch. To avoid harsh or “cold” lighting, look for light strips that are on the warmer end of the color spectrum, between 2700 and 3000 Kelvin.