Forget the notion that Victorian kitchens weren’t comfortable, commodious, or equipped with the latest in high-tech gadgets. For their time, they were all of those things. Victorians not only piped hot and cold water directly into the kitchen, but they also invented the in-kitchen ice chest (forerunner of the refrigerator), the hot-water heater, and the gas-fired range.

Fitted with dry and wet sinks, tiled walls, a massive black stove, and dozens of utensils within easy reach, the grandest Victorian kitchens were on the cutting edge of domestic science. Granted, few of us today would care to hand-pump our own water or cook on a coal-burning range. But given the 19th-century penchant for innovation, re-creating the look and feel of a Victorian-era kitchen needn’t set you back a century and a half. Scores of cabinetmakers build period-sensitive cabinetry—but it’s the details that define a sense of Victorian style. Chief among these are the waterworks: sinks, faucets, and fittings, and by association, backsplashes. As for gadgetry—appliances, that is—plenty of alternatives keep the spirit of Victorian ingenuity alive and well.

This homeowner faced a dilemma—he had no clues to guide kitchen design. The old butler’s pantry had been converted to a bookcase. The original, small kitchen had been remodeled at least twice in the middle of the 20th century, and had long ago absorbed two pantries. The existing kitchen was decked out in black linoleum and white metal cabinets. Still, he harbored no illusions about “authenticity.” The house is a large, urban Victorian Chateau, which would have had a utilitarian servants’ kitchen. So “I considered what the Victorian owners might have done if they’d used their kitchen the way we use our kitchens today,” he explains.

The look is reminiscent of a commercial space of the period, a bakery or a restaurant. Soapstone countertops have a soft, honed finish. When it came to appliances, the creative renovator used two drawer-style dishwashers and a paneled refrigerator to minimize the impact of modern conveniences. “I avoided having a built-in microwave,” he adds, “since to me, that’s a dead giveaway that it’s a new kitchen.

“What I really like is when people say, ‘This is all original, isn’t it?’ To which I reply, ‘Yes, this is an original 1897 Sub-Zero, and these are original 1897 Fisher-Paykel dishwashers!’”

Gas and electric fixtures still piped for gas, a vintage telephone that really works. The modern refrigerator and microwave oven are tucked out of sight, behind a portiere (doorway curtain) that’s drawn across the pantry door. This kind of attention to period details makes a Victorian-era kitchen believable.

The room shown had originally been a prep and cleanup kitchen for the butler; the old working kitchen was in the basement of the 1889 San Francisco house. Besides suffering extensive water damage and settlement, the space had been ruined by a grease fire. The history-minded owners decided to retain the old-fashioned layout, along with some old fixtures and the plain-Jane wainscot that had survived the fire behind pink and yellow Masonite.

But they did make the kitchen discreetly modern. Note the dishwasher lurking behind period-perfect batten doors (opposite). The large china cabinet that looks original to the room was a lucky salvage find. Even the annunciator wires discovered in the walls were restored. “We keep ringing for the servants but none of them comes,” joke the owners.

When a couple bought this tiny Victorian cottage, abandoned for 30 years, it had never had plumbing. “We like to say the house had running water—meaning you had to run to get it,” quips the owner. But the house did have decorative bargeboards at the eaves, diamond shingles, and scalloped window casings that oozed charm.

In the turn-of-the-century rear addition, the family created a whimsical Victorian Revival kitchen, designing it themselves down to the fanciful brackets that support upper cabinets and the spandrels over the black marble sink.

Although the cabinets are white, the kitchen is far from monotonous. Beadboard cabinet faces, corbeled brackets, turned cabinet feet, bin pulls, and butterfly hinges create depth and charm on a scale that complements the petite house.

Fittings are luxurious, with a nickel-plated Heartland range taking center stage. The Sub-Zero refrigerator is completely enclosed, the Gaggenau dishwasher looks like a bank of drawers, and the microwave oven is behind a tambour door. 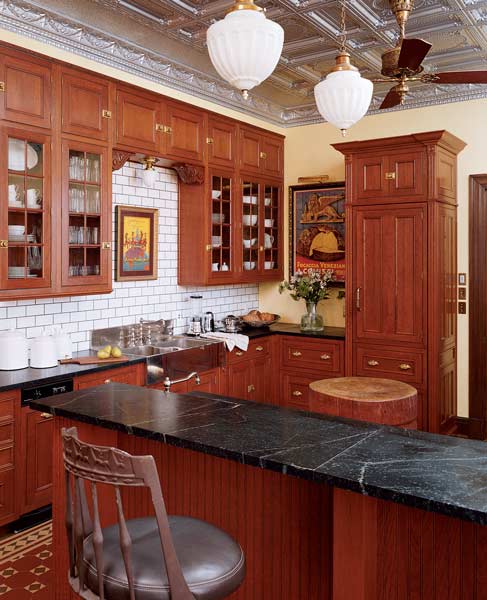