When Kim and Roy Fox came across this 1884 house in Portland, Oregon, it had 26 code violations against it. “It was truly condemned,” Kim reports. Nevertheless, thirty years ago, “we paid the full $20,000 asking price, even though the roof was rotted, the brick foundation had sloughed into the basement, and the second floor bath was visible through the kitchen ceiling,” Roy says. The couple labored for a year and a half just to make the place habitable. They even put in a new, high-end 1980s kitchen.

“We worked with a kitchen designer on a standard U-shaped layout, going for a Victorian ice cream-parlor look,” Kim explains. “The sink, stove, and fridge went into what had been the old pantry. We put in Corian countertops, oak cabinets, and vinyl flooring.” 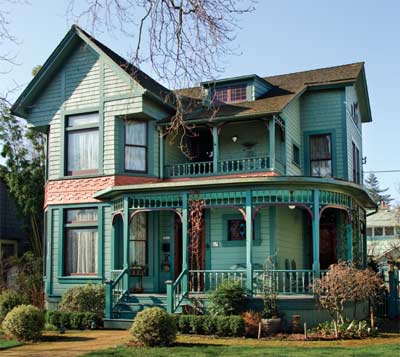 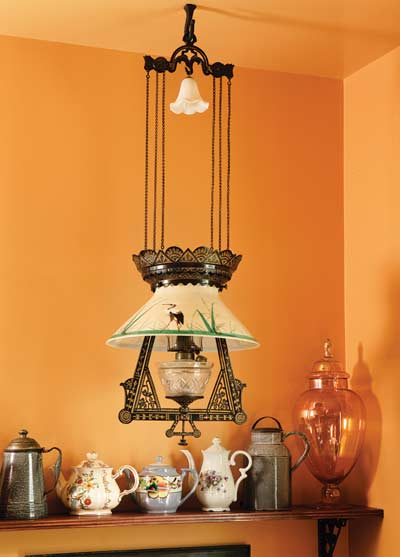 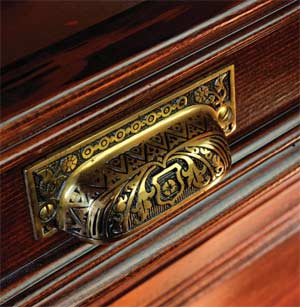 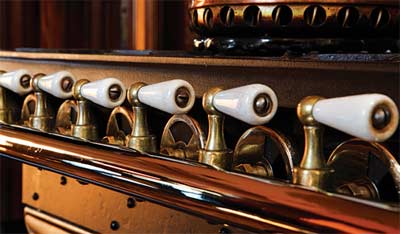 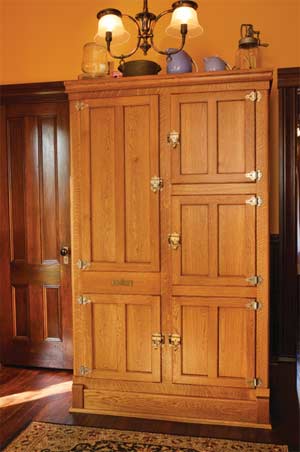 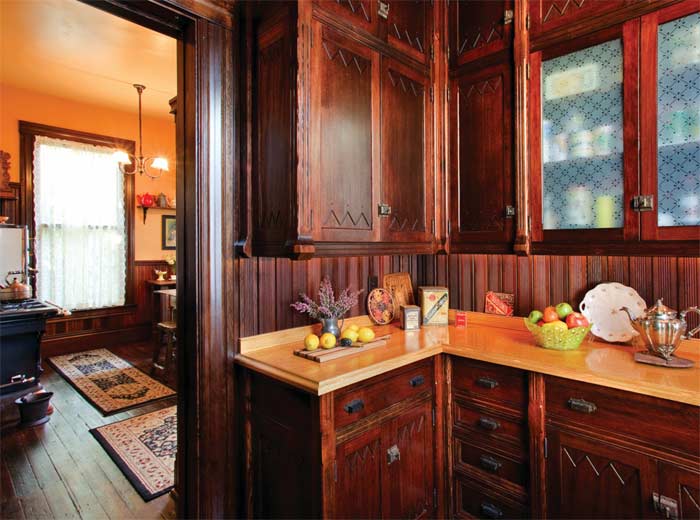 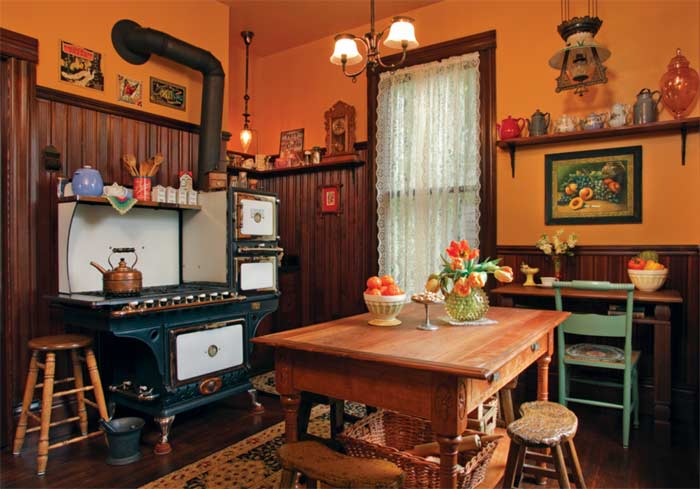 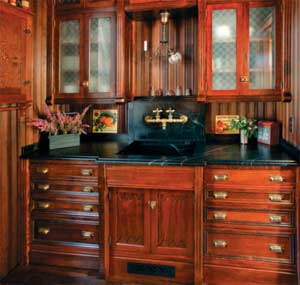 Roy wasn’t thrilled with the result. “I knew as soon as we finished that it would have to go. The transition from the kitchen to the living area, which we’d kept true to the original style, was jarring.” Although the vinyl flooring was replaced after a kitchen fire in 1993, the couple’s authentic dream kitchen would have to wait until 2007. That’s when the Foxes met with restoration consultant Karla Pearlstein.

“We tested each other about how historic to get,” Roy says of their first meeting. “Kim and I wanted an ‘old feel’, whereas Karla was gently pushing for authenticity.”

Karla remembers when the light bulb went on over Roy’s head, as she was describing the probable layout of the 1880s-era kitchen. Kim was not as easy to convince. “I loved my kitchen layout! It was a wide-open space with lots of storage and room for family.”

Karla brought building designer Matthew Roman on board. Together they wooed the Foxes with vintage photographs and Victorian plan books.

“They recommended we place the stove where the original chimney had been . . . but the space held our round oak table, where we’d brought up our kids for 25 years,” Roy says. “That was tough.”

Roman’s elevation drawings included sketches of the cabinets in the restored pantry, and showed the return of the stove to its original location along with reconstruction of the wall that once divided the pantry (and scullery) from the cook room. The beautiful drawings convinced Roy and Kim to start demolition in January 2008.

“Demolition gave us an archaeological history of the house,” says Roy. Physical evidence of the missing wall provoked an ebullient late-night call to Karla, an affirmation that she’d steered them in the right direction.

While Karla researched plumbing and lighting sources, the Foxes scoured the Internet for a period stove. A 1925 Magic Chef that looked good online turned out to be rusty and flawed. Karla told them to get their money back and go see stove restorer Dave Erickson, whose showroom is in an 1860s train depot in Littleton, Massachusetts. So they flew to Boston to inspect Erickson’s stove choices in person: a 1920s Magic Chef, a Victorian model, and a 1915 Eriez stove. Kim chose the Eriez for its elegant lines, mint condition, and three ovens. It was the perfect size to go with the handcrafted furniture that Lee Johnson was making to replace the round oak table.

Brendon Powell had built some Victorian screen doors for the house and came to bid on doors for the kitchen. A fine and knowledgeable craftsman, Brendon stayed around for the cabinetry, icebox, and trim. For elements of the beaded-board wainscot, the team looked at existing wainscot in the house and trim details on the staircase. Brendon had knives cut to match the unusual pattern. He built much of the cabinetry on site, milled the new wainscoting in his shop, and even gave his opinion on preliminarypaint colors: “Ugly! You can’t use that in here!”

Then came the refrigerator dilemma. When an icebox company failed to deliver, the Foxes found the Liebherr Company, a German appliance maker than offers an integrated refrigerator of reasonable size. Working from Matthew Roman’s sketches (which took cues from a McCray icebox), Brendon Powell built the wooden case and doors at his shop.

The five member team says they talked-through the details of the project in a single evening. “Amazing,” says Kim, who stripped and stained the original wood floors, then finished the wainscoting and cabinets.

“We each learned something from the others,” says Matthew. “It was a true team project.” As Karla says, “Early on, Matthew and I realized what special clients we had in Kim and Roy. They were willing to indulge in the esoteric nuances of old kitchens.”

View all Kitchens & Baths in the Products & Services Directory.