When the last of their five children left home, Merle and Ron Mardigian decided their sprawling Tudor home was too large for them. They wanted a smaller, more intimate new old home that reflected their passion for the Mediterranean and their Southern California roots. “We were totally committed to finding an old, Spanish-style house,” Merle recalls. “We love older architecture. We wanted a home that reflected our love of the Mediterranean. We also liked the way [Spanish Eclectic] architecture reflects Los Angeles and its past.”

Searching the hillsides and canyons of the Hollywood Hills, they discovered in the Oaks section of Los Feliz a circa 1920 Spanish eclectic house perched on a steep hillside with pale saffron-colored walls draped in bougainvillea. Developed in the first decades of the twentieth century, the neighborhood was home to a number of first-generation Hollywood celebrities, including W. C. Fields. But fashion can be fickle in Hollywood, and the area experienced a slow decline before being recently rediscovered by a new generation of artists and celebrities, including filmmakers Spike Jonze and Sofia Coppola, and actors Nicholas Cage and Noah Wyle. 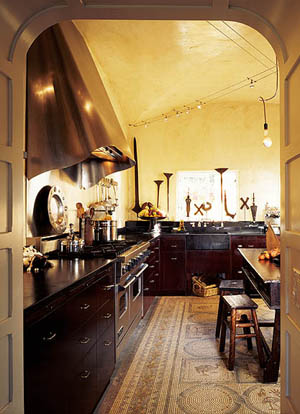 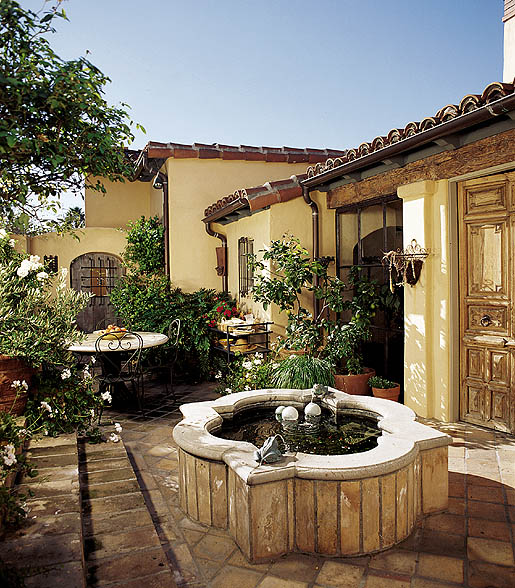 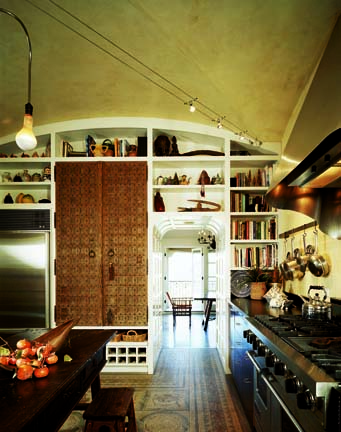 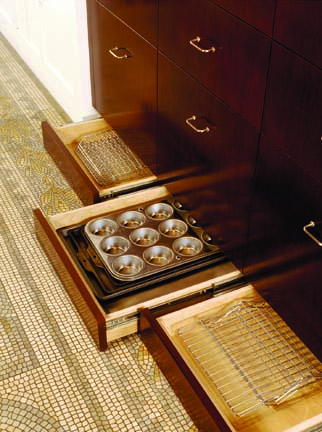 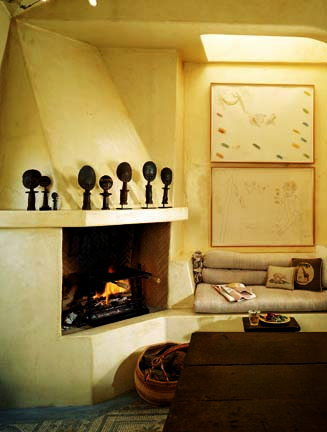 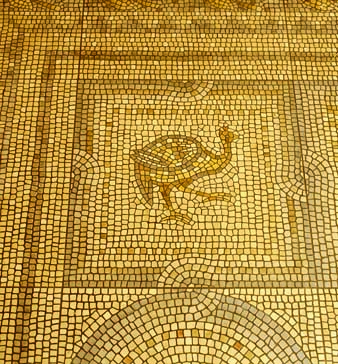 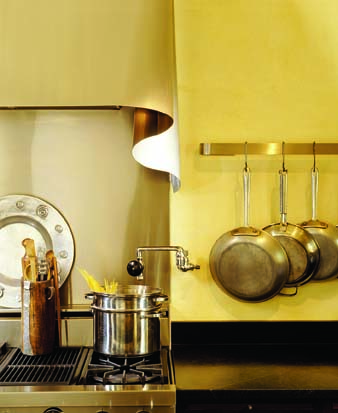 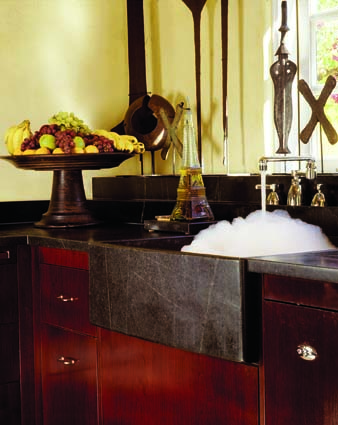 The Mardigians enlisted designer Liza Kerrigan of Blue Studio to help them realize their vision of a Mediterranean retreat. “The biggest challenge was the kitchen,” says Kerrigan. “It was generic; it looked as if it had come straight from a department store. Merle is a gourmet cook; her kitchen had to be well equipped. She also has a high aesthetic sensibility. If she was going to spend a lot of time in her kitchen, it had to be perfect.”

The Mardigians had a very specific vision. “We wanted it to be like some of the kitchens we’d seen in Europe,” says Merle. “We wanted it to say, ‘This is a room; we decided to put a kitchen in it.’ I’m not a short-order cook, so it didn’t have to be hyper-efficient. But I wanted a big kitchen, where my whole family could sit and hang out together.” In order to achieve the desired effect, the space itself had to be the dominant design element, with the conveniences and necessities of a modern kitchen appearing to be later additions.

Kerrigan pushed the exterior walls outward and the roof upward to create an old-world space complete with a groin-vaulted ceiling to achieve the illusion of load-bearing masonry construction—gestures that were in harmony with the original design of the house but elevated it to a new level. Walls and ceiling were finished in a warm, muted color of tea-stained linen, creating a believable illusion of age. “The pigment was mixed into a sealer and applied to the walls and ceiling,” Kerrigan explains. “It gave a depth and a richness to the walls that was in keeping with the rest of the house.”

At the client’s request, Kerrigan added a fireplace and an adjacent inglenook with a skylight above. Conventional upper cabinets would have marred the aesthetic effect that Kerrigan and the Mardigians were trying to achieve, so to provide sufficient storage, Kerrigan made the base cabinets a bit taller (38″ instead of 36″) and a bit deeper (30″ instead of 24″) than usual. The wall separating the kitchen from the dining room is filled with open shelves that hold Merle’s cookbooks and a fascinating assortment of exotic cooking utensils. “We spend a lot of time in East Africa, Kenya, and Tanzania,” Merle explains. “We’ve collected a lot of African cooking tools: a Moroccan teapot, an African pasta maker shaped like a crocodile, a Bedouin coffeemaker.” Kerrigan designed the wall to be several feet deep, making room for linen storage on the dining room side and lining the arched and painted wood-panel passage to the dining room with hidden pantries equipped with touch-latch doors, further increasing the sense of mass one would find in an old European stone house. A pair of antique, ornately carved, Indonesian-inspired doors that Liza and Merle found at Arte de Mexico in North Hollywood complete the storage wall, adding an eclectic element that one might find in an old kitchen modified over time.

The stove, a six-burner Viking range, sits below a stainless-steel hood that Merle designed herself. A former interior designer in her own right, she indulged in realizing a design idea she had long wanted to execute for clients. “I had seen something similar in a magazine, and wanted to tweak the design a bit and make it look like a [draped] handkerchief! I was always trying to get clients to go along with it, but it was too expensive, so I used it in my own house.”

Merle is the owner of Mosaix, a company that manufactures flooring and patio furniture. Her company produced the unusual kitchen floor, made of 18″-by-18″ sandblasted and hand-cut limestone pavers, patterned with a replica of a mosaic the Mardigians had seen in an ancient church in Petra, Jordan. The final touches include a rustic, antique table that Liza and Merle found only after the kitchen had been completed and a sculpted, minimalist light fixture above it designed by Ron Mardigian.

Raising the roof and meeting the challenges of hillside construction and seismic codes meant that the entire project, executed by Debbie Ross of Ross Construction in Sierra Madre, took months to complete. The Mardigians gamely set up a temporary mess hall in their home’s courtyard for the duration of construction. “You just have to have the right attitude about camping out,” Merle laughs. “We had Thanksgiving dinner without a kitchen. We made turkey in a pizza oven and set up tables on sawhorses, and had 30 people over to dinner in our courtyard.”

The courtyard extends the Spanish Eclectic aesthetic to the outside. “We had added a fountain and a pond in the courtyard,” Merle says. “We tried to create an ancient garden: We planted grapes, pomegranates, figs, lavender, and rosemary hedges. There’s an olive tree. The yard is all terraced on the hillside, so it’s the kind of garden you would see in the Mediterranean: Spain, Italy, Tunisia.”

The Mardigians are delighted with the results. The house and the neighborhood suit them perfectly. “I love the ethnicity of the area, the artistic community,” Merle Mardigian reflects. “We live right above the American Film Institute campus on the western edge of Griffith Park.” Kerrigan is also pleased with the eclectic design she created in collaboration with her clients. “We let the house guide us,” she says. “We responded to its architecture and its past.”

Lynn Morgan is a freelance writer living in Los Angeles.