The renovation of Benita Cooper’s Victorian began where the home’s shortcomings were most pronounced: the upstairs bathroom, the only such room in the original incarnation of the house. Benita first restored the existing small bathroom, which entailed pulling up all the tar paper that had been applied to the floor and replacing the flooring with mosaic tile, stripping all the wainscoting with dental tools, and re-glazing the original sink and clawfoot tub.

When Superior Home Services came on board, the focus turned to creating two additional bathrooms by dividing a bedroom into a larger master bath and a smaller bath for the middle second-floor bedroom. And in the end, the two new bathrooms met at the intersection of elegance and functionality. In the small bathroom, Benita tapped into her antiques collection for the pedestal sink, shelves, light fixtures, mirror, and the elegant Minton tiles in the shower stall, placed among Gramercy Park border and trim tiles from Architectural Ceramics.

“We mixed the new with the old, but we focused on the old to make the new look like it was old,” Benita says. The floor of the small bathroom features hexagonal ceramic floor tiles from Morris Tile, and the Perrin & Rowe shower features a delightful pattern from Mosaic Marble. 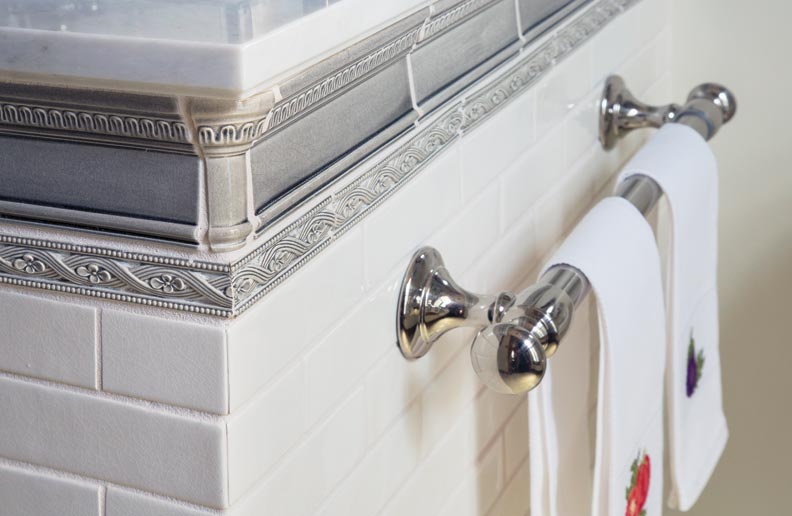 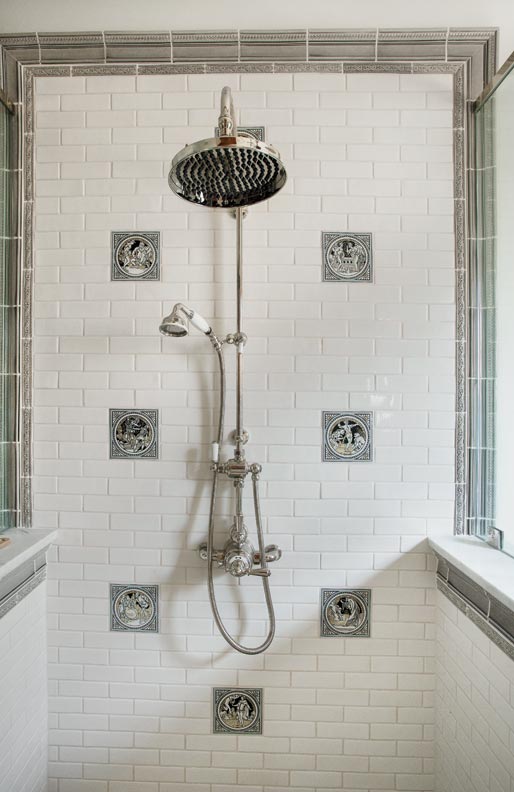 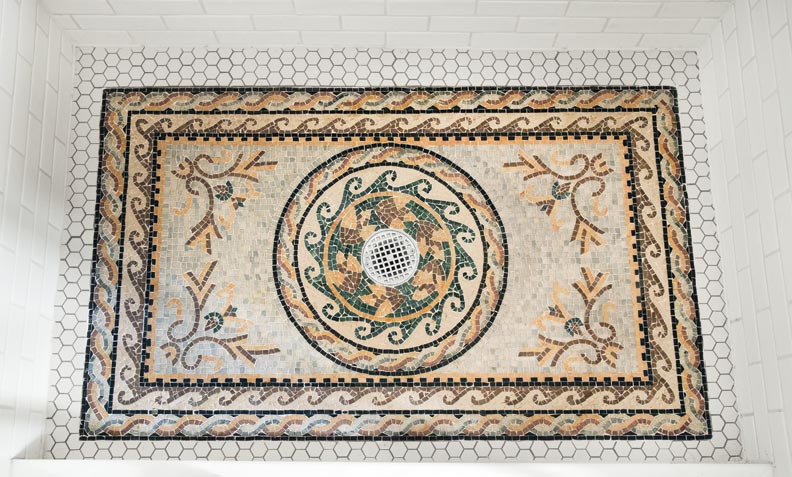 The master bathroom echoes the themes of its smaller counterpart. The Perrin & Rowe exposed thermostatic shower features carrara subway tile on the wall and stall. GLB installed the marble floors, as well as the master bath’s double sink top and backsplash, fabricated from 2.5″-thick marble. The large walnut Renaissance Revival mirror above the master bath’s sink is part of Benita’s personal collection, as are the wall cabinet, chandelier, and light sconces. The walls are adorned in Iris Frieze wallpaper from Bradbury & Bradbury. Matching plaster crown molding was recast and installed to complete the two new rooms.

Throughout the renovation, Benita tussled with how much she was willing to spend on outfitting the bathrooms. “I’d fall in love with something and decide I couldn’t afford it,” she says. “Then I’d say, ‘This is a project you’ve been planning for 20 years, and now you’re doing it. Don’t cop out.’”

The bathrooms posed a number of challenges in terms of space, but the crew found solutions. Preventing the doors from hitting the walls or the edge of the toilet meant that, ultimately, the doors were re-hinged on the outside. And to better bear the load of the new floors, LVL beams were installed—no easy feat, considering balloon frames from the pocket doors on the first floor extended straight up to the attic. Additionally, the windows of each bathroom looked directly onto the brick walls of Benita’s neighbors. To mitigate the effect, antique stained-glass windows were installed, with custom frames and shutters behind the glass.

Throughout the project, Michael Martin of Superior Home Services found himself impressed by the handiwork of his forebears. “It’s amazing what they used to build with what they had,” he says. “You don’t see it anymore unless you’re in my kind of business.” But with an inspired vision and careful execution, the bathrooms in this Victorian home evoke those same sentiments of time gone by.