Creating a new bathroom that works in an old house can be a challenge, but from the outset, Michael Dorneich and Caroline Hayes had a solid strategy. “We wanted to have something relatively authentic to the era, that would match the house,” says Caroline. “If you have an old house and renovate in old style, it will never look outdated.”

Dated bathrooms were something the couple knew well, having inherited two of them in their 1899 Italianate in St. Paul, Minnesota. “The house was in fairly good shape overall, but the bathrooms had undergone the dreaded 1970s makeover,” says Michael.

On the second floor, previous owners had squeezed a pink toilet and sink into space that once housed a closet, while the third floor harbored a three-quarter bath. “But not the three-quarter you’re used to,” says Michael, explaining that it contained a shower, a sink—and a urinal. The couple aimed to reconfigure spaces to create a roomy second-floor master bathroom, add a walk-in closet for Caroline, and make the third-floor bath more usable. 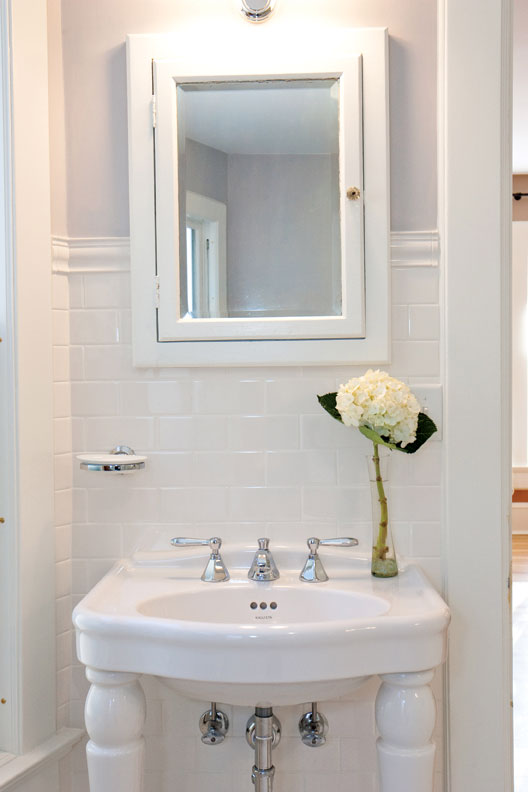 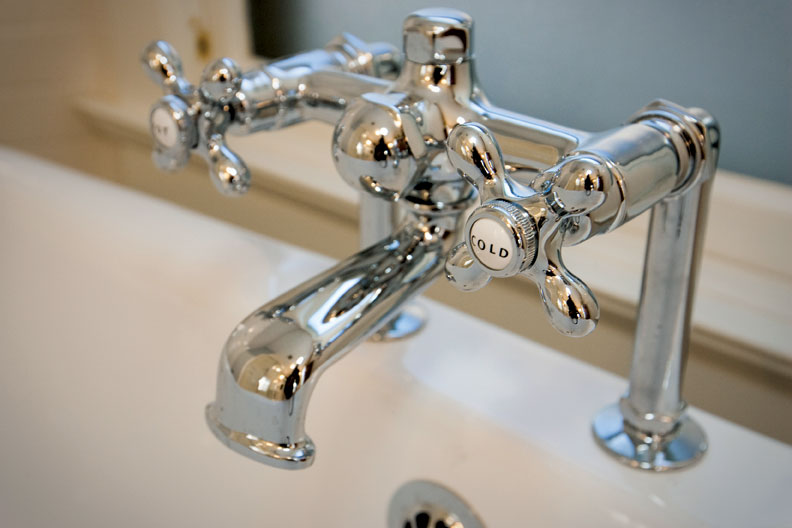 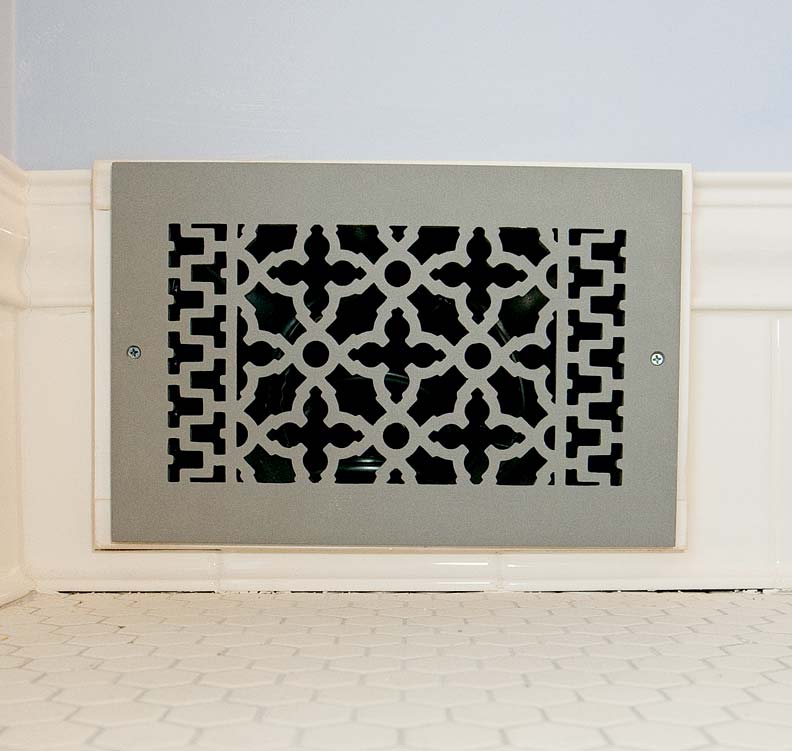 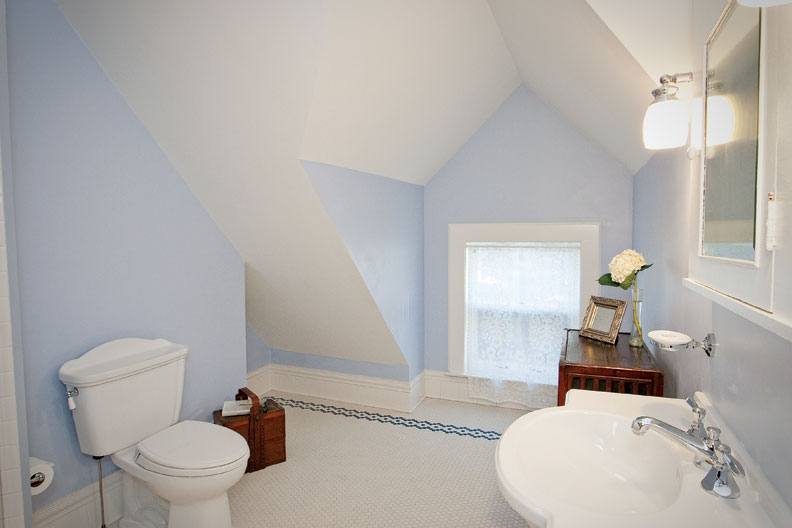 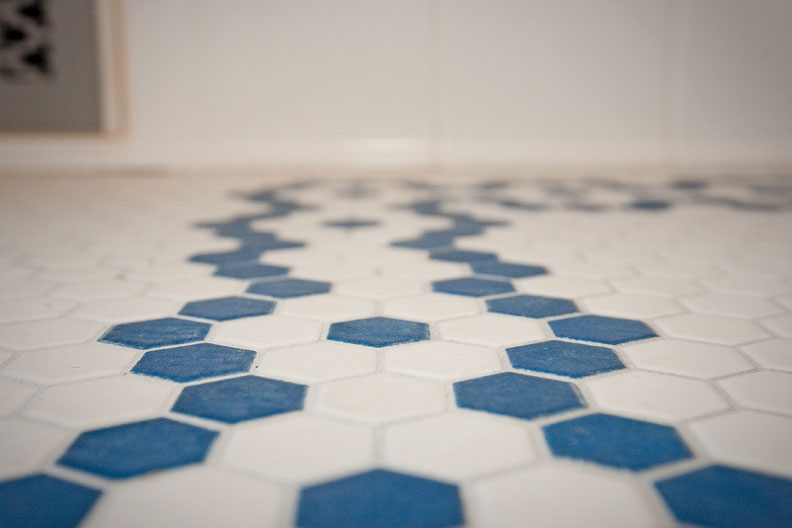 To help them carry out this vision, they turned to Laura Orfield-Skrivseth of Orfield Design & Construction in Minnetonka, who was recommended by a colleague of Michael’s. Working with Laura proved to be a boon for the couple. For starters, she helped mediate their long-running conversations about how to approach the project.

“They often had opposite opinions of what each room needed to look like,” explains Laura. “I took input from each of them and interpreted it through our best design practices and our experience in working with older homes.”

“It was almost like homeowners’ marriage counseling,” Michael says. “Orfield was an honest broker; within a month we had a master plan.”

The home’s second floor would contain the master bathroom suite, where Caroline and Michael knew they wanted a separate shower and tub. “We thought it would be nice to have a freestanding tub,” says Caroline. But she didn’t want to have to clean beneath it as she’d done with clawfoots in two prior old houses. “So I chose a pedestal instead. I still have to clean behind it, but hopefully nobody’s looking!”

The cast iron pedestal tub sits in the far corner to maximize floor space. Installing it proved tricky, since the floor—as in many old houses—was quite uneven, leaving a visibly different line at the bottom of the tub from one side to the other. “We had to install a trim tile, like a little lip around the bottom, because the floor pitched so much,” explains Laura. “It looks like it’s part of the tub, but it’s hiding an old-house ailment.”

The floor pitch made tile installation a challenge as well, especially on the second floor. “Because that room has a tile wainscot that goes in and out of the shower as well, we had to find that right line so it could go completely around without pitching,” says Laura.

Tiler Jody McKay flawlessly executed the tricky installation, and also carried the decorative hex tile floor patterns into the shower stalls, a technique Laura has used in other houses, too. A floating floral hex motif grounds the master bath, but on the third floor, Caroline wanted something different. “We chose to have the pattern around just the edge there, something we’d seen as an original example at a friend’s house,” she says.

As part of their quest to keep the bathrooms looking old, Michael and Caroline found several items at local salvage stores, including medicine cabinets and lighting. “I wanted plain, ordinary medicine cabinets of the era, but it was hard to find them in decent condition,” says Caroline. “The salvaged medicine cabinets were authentic and of better quality,” says Michael. “Of course, we had to restore them.” (The couple scraped away the old lead paint themselves, wearing protective gear.)

They also found a host of leaded glass windows, which required some creative problem-solving from the design team. “They brought us panes of leaded glass, and we had to assemble them into frames and jambs and casings and make them into something,” explains Laura. The company’s master carpenter, Ron Orfield, was critical in pulling it all together.

On the third floor, a leaded glass window became a transom above the bathroom door to help light flow into the adjacent hallway. In the second-floor master bath, a leaded window was added inside the bay, positioned between two double-hungs to mimic the exact placement of an original leaded pane on the first floor, which is flanked by two tall windows. “We mirrored the pattern so it would be consistent in the house,” says Caroline. Owing to the severity of Minnesota winters, Laura’s team also insulated the window by adding a layer of tempered glass on the home’s exterior.

Getting materials into the third-floor bath required more creative problem-solving. The third floor was accessible only by a narrow, winding staircase, which meant the Orfield team had to remove a third-floor attic window to boom in drywall and lumber. But here, the design just fell into place. “There were only so many straight walls where you could put a full-height shower and have a sink with a usable mirror,” says Laura.

The bath, with bird’s-mouth ceiling details thanks to the gable, makes quite an impression, packing a lot of period details into a small space. “We thought that if either of our parents need to move in at some point, we’d give them the master suite and move upstairs, and still have a nice, usable bathroom there,” says Michael.

Both he and Caroline are pleased with the finished project, which won a Chrysalis Award for the design. “Just having a bathroom that nice makes it fun to get up in the morning,” says Michael. Laura shares their enjoyment: “I had a lot of fun with their openness to using salvaged materials,” she says. “They created beautiful features in their home.”