For the victorians, kitchens and bathrooms weren’t considered design-worthy spaces. These utilitarian rooms were just a side note to the grand, sweeping living rooms and ballrooms that visitors saw and socialized in. When Spence Kass, the principal of the architectural firm Kass & Associates in Philadelphia, was asked to step in for a renovation of the George C. Thomas House, a historic Victorian mansion in Philadelphia’s Rittenhouse Square, the homeowners’ list of projects was short and sweet: a redo of the kitchen and master bathroom.

Three years later, Kass and a team of experts and artisans had completed a renovation of the historic Victorian mansion that ultimately touched almost every interior space. “The kitchen and master bathroom were the prime focus,” Kass says. “The project evolved.” Today the 1874 double-wide townhouse is a shining example of modernized Victorian splendor, with soaring interiors touched with exquisite details such as solid marble doorframes.

Creating a fine balance of historic integrity and modern conveniences was tricky. But the result is a stunning home that garnered a 2016 Palladio Award for Residential Restoration & Renovation and a recent Preservation Achievement Award from The Preservation Alliance for Greater Philadelphia. Just as meaningful for Kass is the warmth the homeowners have for their revamped house, which shows off the couple’s collection of maritime antiques set against a rich Victorian color palette. “But it’s not just a museum piece,” Kass says. “Each room is really used.” That is not a light statement, since the three-story house measures almost 14,000 square feet.

The bathroom, with an adjoining dressing room, and the kitchen, which opens onto a conservatory, were special challenges. The floorplans for both rooms were completely redesigned. “We went through many different schemes,” Kass says. “The house was a puzzle.”

Kass configured the kitchen from two separate rooms and a pantry and raised the original ceiling, to render an airy room that combines Victorian antiques with topflight appliances set next to new cabinetry and walls of white gray-grouted subway tiles. A wide doorway opens into the breakfast nook and conservatory, rendering a vista toward a dining terrace and garden.

“It was a blank slate,” Kass says of the kitchen. Working with kitchen designer Joanne Hudson, owner of Joanne Hudson Associates Ltd., in Philadelphia, Kass increased the room’s functionality while retaining the historic nature. A Sub-Zero fridge with glass doors and La Cornue range and hood almost fade into the background, allowing the owners’ antiques to shine. An oversized copper tea kettle that was once outside a teashop now hangs next to a cabinet. A trammel, once used to hold cooking pots over a fire, is displayed next to an antique rewired clock.

Space is maximized through clever twists. Kass modified an unused chimney mass by installing a steel column and beam to create space for a wall oven and microwave. Above the sink, dark painted shelves offer more functional space. An island topped with a custom-made walnut butcher block creates extra workspace. These creative solutions were devised by the entire team, Kass says, including interior designer (and family friend of the homeowners) Oona Sperr. New double-paned windows and a heated stone floor help save energy.

The home’s Victorian way of pairing walnut and marble, begun in the kitchen, transferred beautifully to the new master bath. But first, Kass had to figure out what to do with the space— several small rooms which, as he says, “were nothing special. It wasn’t integrated into the grand sequence of the house.” He also had to work around the new elevator, which runs through all five floors and was positioned near the alcove where Kass wanted to place the tub. “That was a tight constraint,” he says. “We used every little square inch we could.” 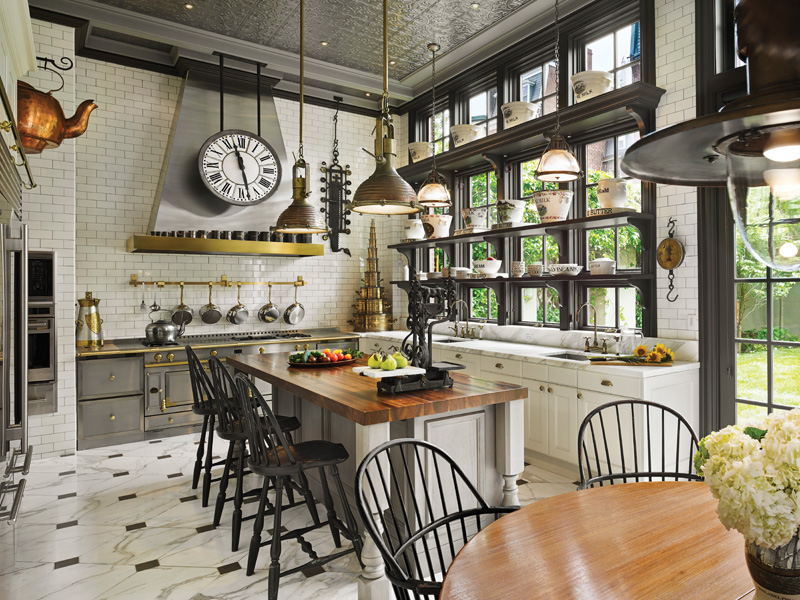 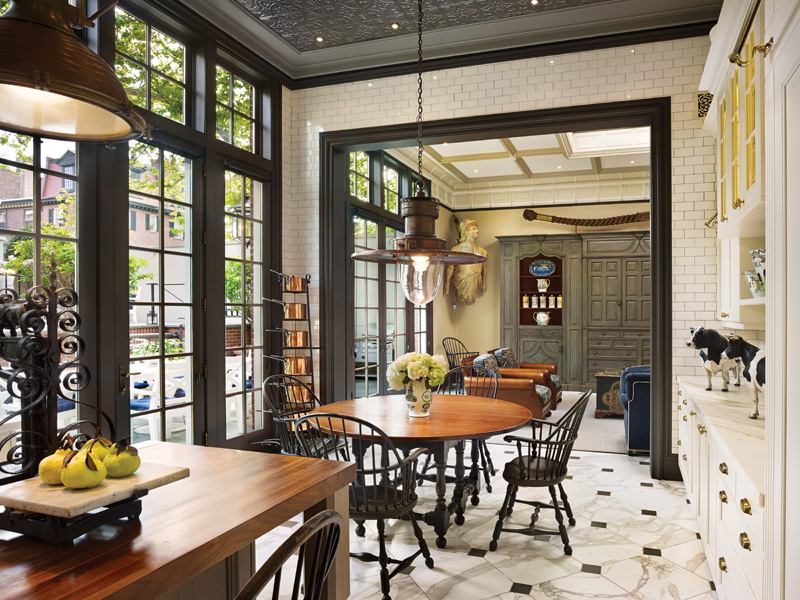 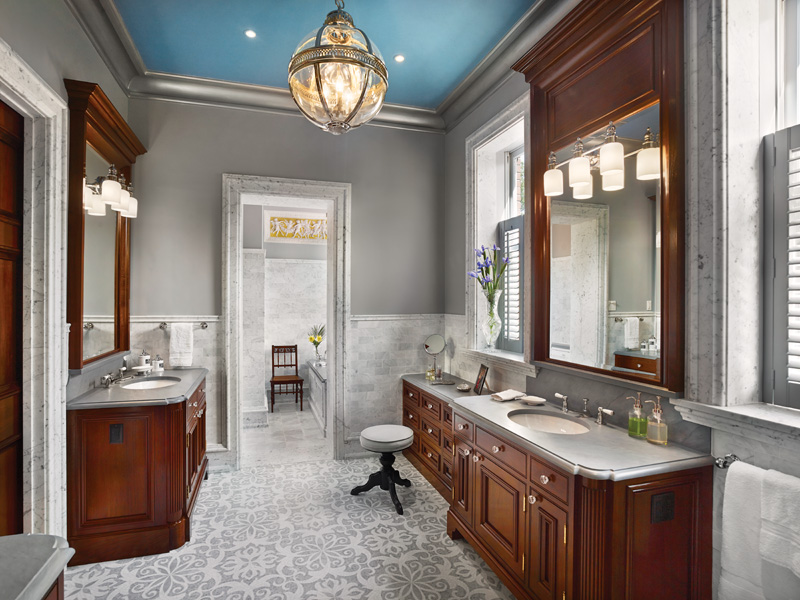 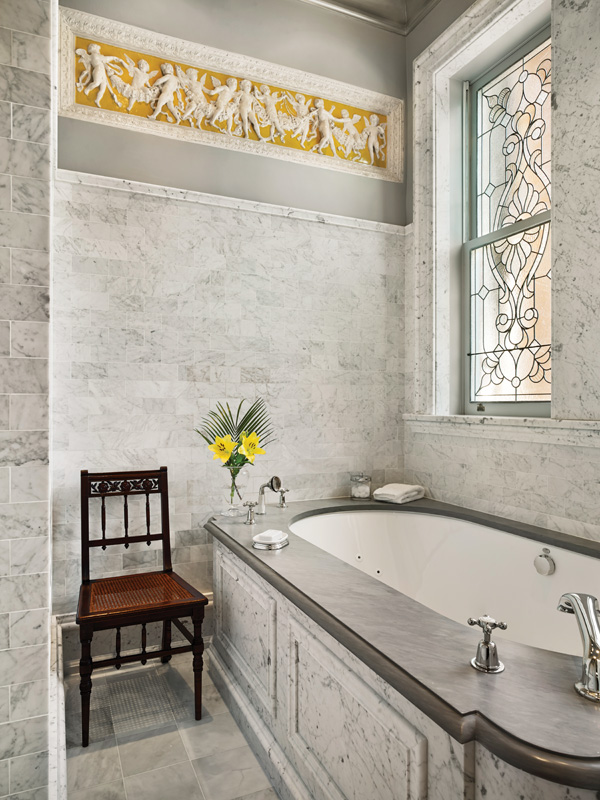 Other questions arose, including a big one: How could the marble casings be designed to reflect the wood casings downstairs, a request by the owners? This inspired an especially interesting maneuver. Kass and his team had the new casings carved from single seven-foot pieces of Bianco Venatino marble, shaped to reflect the walnut casings throughout the house. A new tub with a carved gray marble surround—and a new leaded glass window and terra cotta frieze above—forms a languorous place. A marble mosaic tile floor sets off the room.

Working with the interior designer, Kass gave the elegant dressing room a Victorian flavor with closets built as wardrobes fronted with faux leather doors, and a cabinet to hold other clothing. The ceiling, a moody blue, was inspired by an English country house that Kass and his team had researched. “It’s meant to unify the whole room,” Kass says.

Since the cabinets and ceiling dominate the room, it might be easy to miss the floor, an artful pattern of alternating hard pine and walnut boards, which Kass identifies as an exuberant patterning of the Victorians. Showing off the floor is very much a modern practice. In Victorian times, Kass says, “there would have been carpets or throw rugs over it.”