Architect Peter Zimmerman, whose offices are on Philadelphia’s Main Line in Berwyn, explains that he believes in remaining faithful to historic roots, and in staying sensitive to the cultural context. Here, “the central stone section of the house dates to 1780. But we know that it stands on the foundation of an older log house. Behind it, perpendicular to the 1780s block, is the original 1720 house.”

The clapboard and stone additions around the core date to 2004. The homeowners had decided to make this their family’s primary residence, and asked Zimmerman to tie together old parts of the house while providing additional bedrooms along with a new kitchen and family room. They also wanted to scrape away unsympathetic past renovations.

In the 1720 section, Zimmerman uncovered the original, large fireplace, which had been hidden behind boards. The old staircase beside the fireplace had been converted to a closet; it, too, was revealed and restored. Old plaster walls were treated to a decorative paint scheme inspired by local precedent, which included painting the baseboards black—an old trick to hide dirt and scuffs.

In designing the additions, Zimmerman relied on ceiling and floor systems salvaged from 18th-century houses. The patina and hewing marks of the old beams and joists go a long way toward integrating the new sections with the old. The new kitchen is in a stone addition designed to match the 1780s portion, also stone. It boasts, in addition to its beautiful ceiling, a pine floor laid in very wide boards found in the attic of the oldest part of the house. “They are wider than 12 inches,” Zimmerman says, “and were, by law, supposed to go to the Crown. Maybe they were hidden in the attic to conceal the poaching!

“We did very little to the boards,” he adds. “We cleaned them up, but did not sand and refinish, so they have a nice patina.”

The large room adjoins the former kitchen, which remains as a butler’s pantry. Custom, white-painted cabinetry has a Shaker-inspired design. Wall-hung cabinets with a natural finish and glass doors were designed like the upper part of a Welsh cupboard. The island is covered with ¾” black granite, honed to resemble soapstone. Countertops are a light-color granite, also with a honed finish, that more resembles marble. Abutting the island, a pastry table with turned legs has a traditional marble top. Rattail hinges and plain wood knobs are 18th-century rural standards. 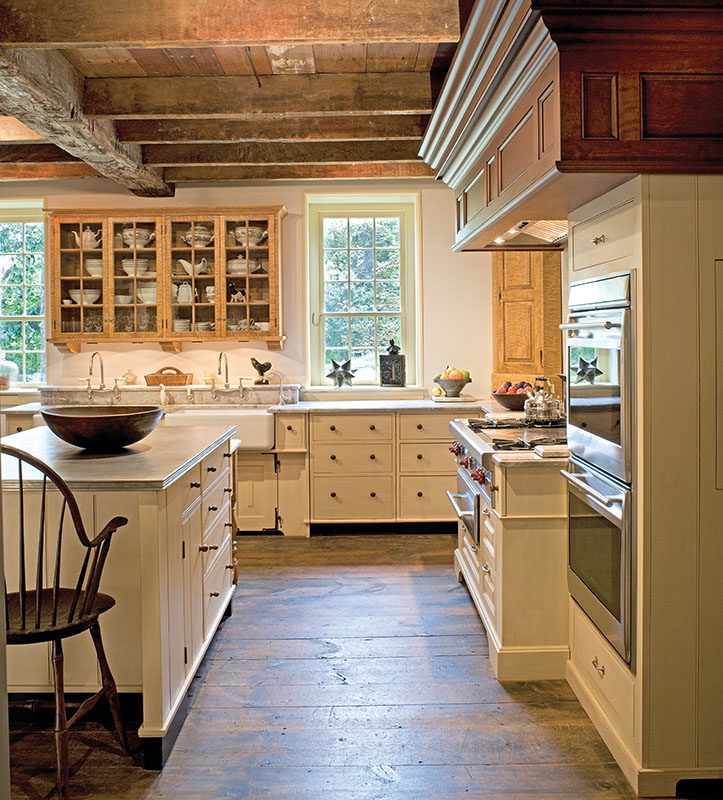 “Like the house, the kitchen was made to look as though it had grown over the years,” Zimmerman says. “The stove hood has the look of an old fireplace hood.” That paneled hood with deep crown mouldings, mounted over an eight-burner cook stove, is the center of the room, as a hearth would have been. Over the stove, an antique metal door reinforces that allusion to an old fireplace—but instead of concealing a beehive oven, it is a spice niche.

The Vernacular
We associate much of Pennsylvania’s European history with the English who colonized around Philadelphia. The English King, in fact, named the whole state after one of them: the Quaker William Penn. “But out here, building traditions speak to German settlement,” says architect Peter Zimmerman. He alludes to a charming jumble of side-gable and gable-end houses originating in the 18th century in Berks County. “The red clay tiles on this summer kitchen, for example—that’s very German.”

How to Repair Your Stairs

How To Clean Antique Hardware

11 Tips for Surviving a Restoration