The rural countryside of New York boasts a wealth of historic architecture—often in pristine condition. Besides textbook examples of styles from Federal to Arts & Crafts, there are also innovative uses of local building materials and methods, which created distinctive, regional vernacular styles. One of these methods was cobblestone construction, a technique that used smooth, round stones as a decorative veneer on houses, churches, public buildings, barns, and outbuildings, and as foundations for wood structures.

Although they can be found in several states near the Great Lakes, the greatest accumulation of cobblestone structures is in central and western New York, especially the Erie Canal corridor. The technique is thought to have been brought to America by English masons working on the Canal from about 1817 to 1825. Due to an abundance of cobblestones available from clearing fields and the shores of Lake Ontario, it proved to be well-suited to the area.

Today, these structures are esteemed by fans of historic architecture, but they offer challenges when repairs are necessary. Cobblestone construction formed solid masonry walls, typically about 18″ to 24″ thick (usually thickest at the foundation, thinning toward the roof). The center of the wall was rubble stone and mortar, and the interior wall often was plastered directly to the rubble, or to lath installed on furring strips. Cobblestones were laid in horizontal rows with mortar applied in a V-point style that enhanced the overall appearance of the wall. Besides understanding the peculiarities of cobblestone construction, this decorative pointing is difficult to replicate, and improperly applied mortar is often the first visual clue to a job gone wrong.

Located in the countryside a few miles south of Rochester, New York, the 1832 Federal-style Cole farmhouse has endured several attempts to repair significant vertical cracks between its cobblestone walls and stone quoins. Previous inappropriate repairs include caulking the cracks and the use of hard Portland cement mortars and buttresses to keep the corners plumb. The homeowners had attempted to mitigate the walls’ deterioration by installing gutters and downspouts to take water away from the house and also by improving the grade to prevent rainwater and snow melt from pooling at the foundation. To address the existing cracks and reverse the shoddy repair work, they brought in mason Marty Naber of Naberhood Restorations.

Marty immediately discovered another root of the problem: The quoins—rectangular ashlar stones laid in alternating directions—were not adequately keyed into the walls to resist failure. Unlike on other buildings, where quoins were merely used to imply strength, quoins on cobblestone buildings provide a plumb and square corner that’s impossible to achieve with the stones alone. The alternating arrangement of the quoins creates pockets for the walls to mesh into. On this house, there wasn’t enough difference between the quoins’ length and width, nor were the quoins tall and thick enough, which meant the pockets weren’t deep enough to adequately secure the walls.

Using a hammer and chisel, Marty carefully removed the old repairs and deteriorated mortar at the junction of the quoins and the cobblestones. Some areas were removed to a depth of 10″ to 12″, but Marty cautions that it would be easy to remove too much—experience with and sensitivity to historic architecture are necessary to know when to quit. In addition, using hand tools helps to avoid removing sound materials that might be ruined with mechanical tools. Marty carefully removed the cobblestones and set them aside to be replaced in the wall. 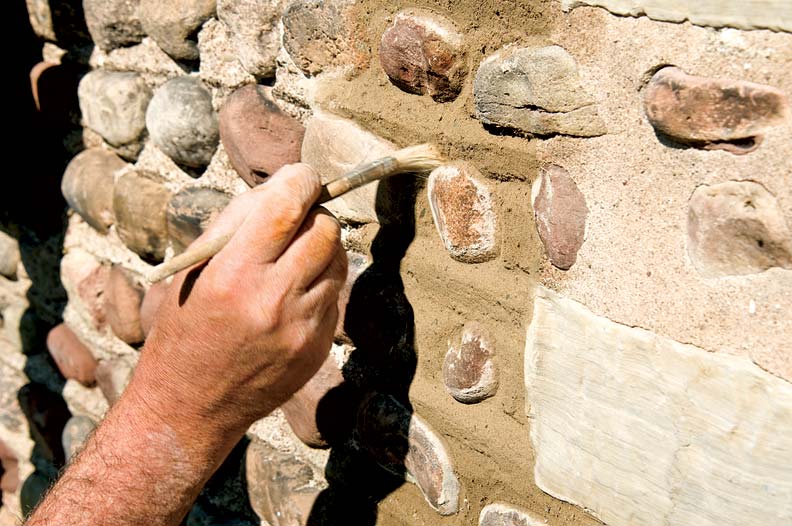 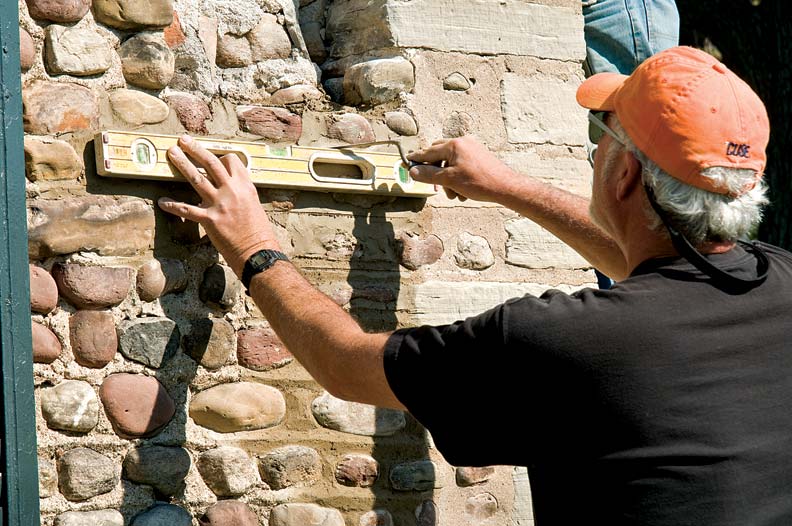 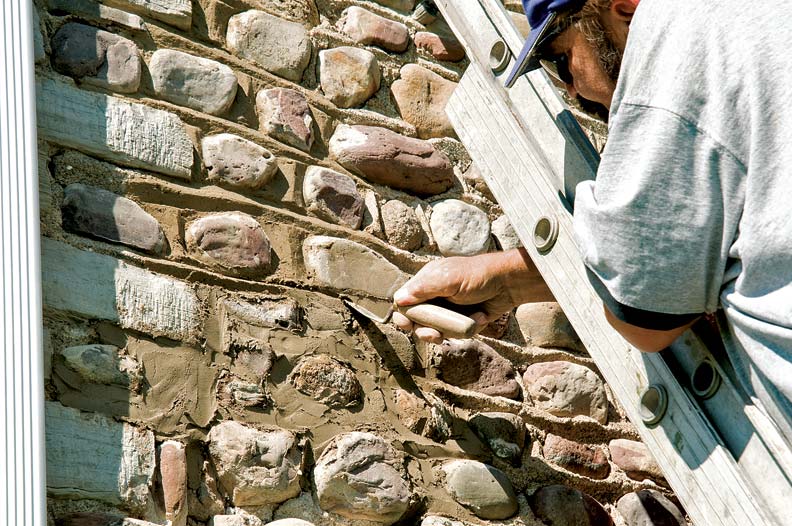 Before beginning the infill, Marty saturated the cleaned areas with water to prevent the remaining old mortar from absorbing moisture from the new. To ensure that the new material would be sympathetic to the old house, Marty used a specially mixed hybrid mortar—consisting of two parts lime, one part ordinary Portland cement, and seven to nine parts mason’s (sharp) sand—and rubble stones scavenged from a nearby field. Starting at the bottom, he replaced the missing rubble stone and mortar, pushing the new material into the voids with any tool that would work—trowels, tuck-pointing tools, even a stick. He worked in layers, giving each one roughly half an hour to set before continuing the process.

After the wall infill was complete, Marty carefully set the original cobblestones in a fresh bed of mortar. Many a contemporary mason has tried to replicate the detail of cobblestone pointing, and most have failed. Marty admits that it took many joints to figure it out—along with appropriate materials and technique, timing is key to success, and the slow-drying, lime-rich mortar allowed him ample time to work.

After setting the stones and packing in mortar around them, Marty then over-packed the joints—in other words, filled them with an excessive amount of mortar. As the mortar slowly set up, Marty used a level as a straight-edge to score horizontal lines across the middle of the joint, marking what would become the high point. With this threshold set, he cut away the V-shaped joints—beginning with the horizontals and then the adjoining verticals—with a variety of trowels and other tools (from dental picks to a kitchen knife), carefully carving away the mortar around the cobbles. As the mortar dried, he dressed each joint and stone with a soft, dry bristle brush to remove any mortar remnants and trowel marks, creating an aged, organic appearance that blends seamlessly with the original wall.