Transom windows over most of the doors in our 1880s row house are important to its authenticity. Transoms historically were used to allow passage of air and light between rooms even when doors were shut. They make perfect sense in row houses, which typically have long, narrow floor plans with windows only at the front and back.

This house originally had four transom windows; all were painted shut. My wife, Wendy, and I not only restored them, but also added two more, including one completely fabricated in our basement woodshop using salvaged glass.

The most common type uses a long rod to operate a lift mount bracket attached to the transom sash. Restoring an existing transom is fairly straightforward, provided the window is in good condition and you have all the operable parts.

To make a transom window operational, the goal is to install it so that the window can be opened to a 30-degree angle or so. That’s enough to allow airflow without making the window hard to open or close.

The window lift operator should be set at a comfortable mounting height for an average adult to easily slide the window open. We mounted the clasp of our transom at a height of 50″ above the floor, roughly the same as a light switch. If you want to set the lift operator higher, first pinch the clasp and move the rod completely into the “up” position to fully extend the rod. This is important to ensure the rod won’t run into the ceiling when it’s all the way up.

Once you’ve got the location of the clasp on the trim, hold the assembly in place and mark the screw locations. While continuing to hold all in place, have another person climb onto a stepstool or ladder and place the upper support bracket about 1″ above the lift’s hinge. Then mark those screw locations. Remove and drill your pilot holes based on the marks. Then simply drive screws to secure the mount.

Placing the rest of the components is pretty simple. Secure the clasp and supports in your pilot holes. (The middle support piece is still not attached at this point.) Next, pinch the clasp and lower the rod so that the hinge assembly, when collapsed against the wall, puts the top of the mount bracket near the upper support piece, and the upper section of the rod is still within that same support. This will give you the position of the rod when the transom is fully closed.

Climb back up the ladder and position the lift mounting bracket against the sash to determine and mark screw hole locations for the mounting bracket. To drill the screw holes for the bracket, put some tape on your drill bit to mark the drilling depth based on the screw length.

Finally, position the middle support bracket where it will not impede the function of the lift, drill pilot holes, attach the support bracket with screws—and step back to admire your functional transom. If the mechanism is balky, add a squirt or two of WD40 to keep it squeak free.

A Transom Lift (or operator) consists of the following:

• the spring pinch clasp that sits near the bottom of the lift and allows the operator to set the open/closed position of the lift. (This piece mounts to the wall and provides the lower support.)

• a long rod that serves as the operating mechanism and extends from below the clasp to near the top of the transom.

• the supports that mount to the wall at the transom’s midpoint and top connection and which allow the rod to move up and down.

• the hinge assembly and lift mount bracket that attaches to the transom sash and is hinged against the rod. (This hinge and the rod’s upward motion is what actually opens the transom.) 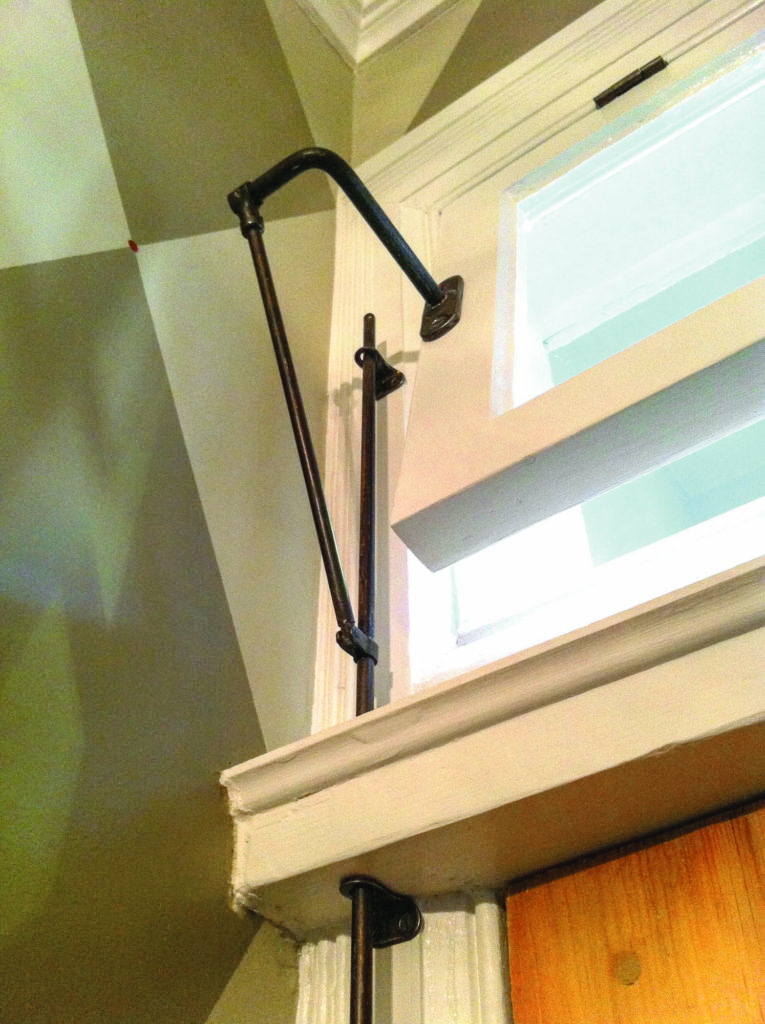 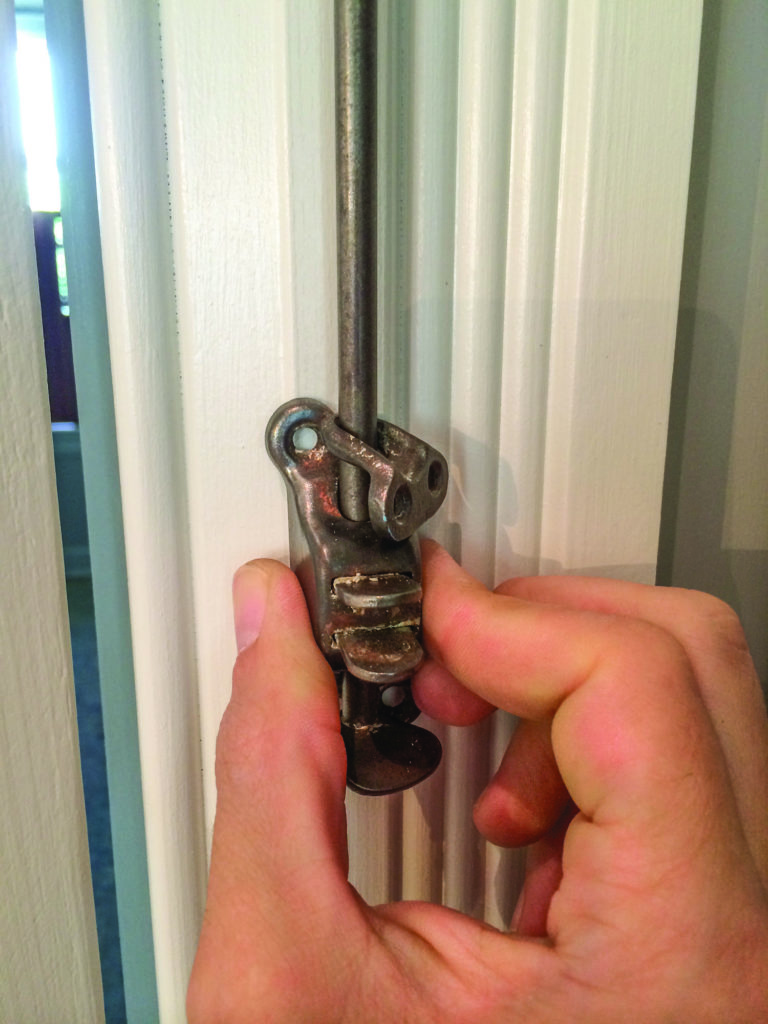 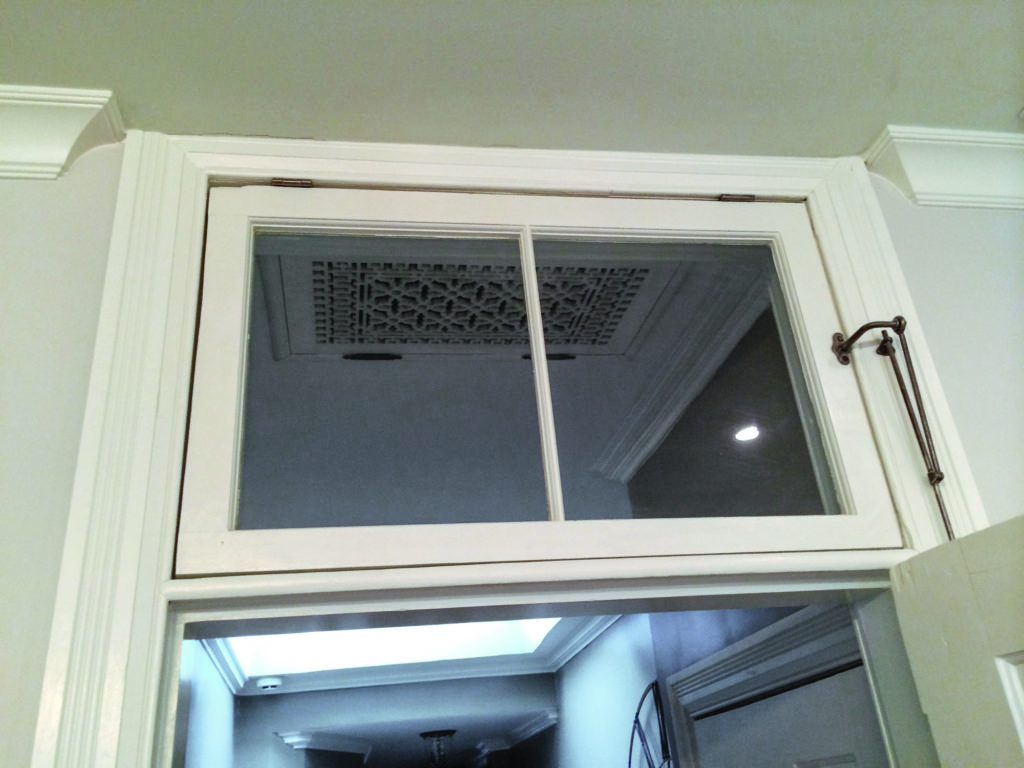 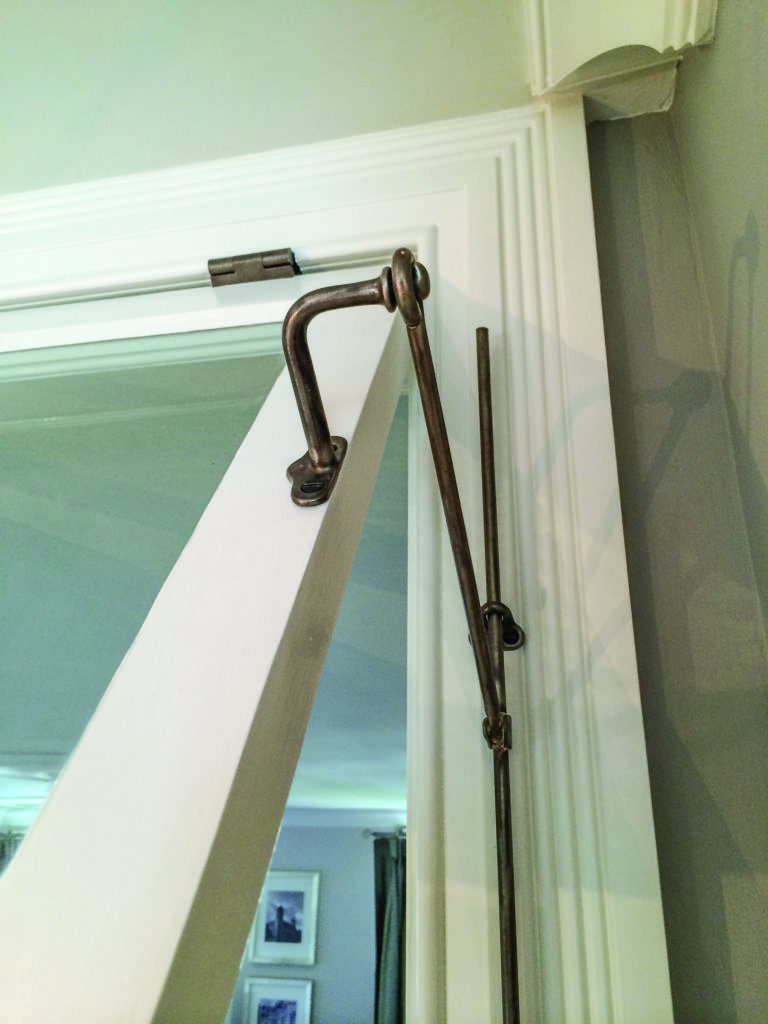 1. Place the spring pinch clasp on the door sash trim about 50″ above the floor. Mark pilot hole locations.

2. Position the lift mounting bracket against the sash and then mark additional hole locations.

3. Secure the clasp and mounting bracket with screws. Attach the hinge assembly and check to see if it’s in the right position to properly operate the transom.

4. The completed, operational transom window, shown in the closed position.

Sometimes essential pieces of the transom operating mechanism are missing. Several companies sell reproductions as kits, but if you are buying a salvaged transom, make sure all the parts are there. Missing lift hardware is sometimes available through salvage dealers and online vendors such as eBay. Santantonio believes that old transom lift hardware is among the rarest items to survive in today’s old homes, as parts are fairly delicate, and many original lifts were damaged and removed over the years.