Radiators were a huge step forward in home heating when they became widely available toward the end of the 19th century. Their dependable, even warmth and ease of operation caused them to quickly grow in popularity, but their positive aspects were soon undercut by the aesthetic dilemma they presented fashion-minded homeowners: How do you decorate around an obtrusive, immobile hunk of metal?

Many people tried, and failed, to make radiators less conspicuous. Painting them to match the walls so that the radiators would blend in, or arranging furniture to hide them, only seemed to make the hulking beasts stand out more. The earliest radiators were wrought iron tube radiators, huge and impossible to decorate around. Then came column radiators, slightly more streamlined but still quite difficult to overlook in a room. Manufacturers, hoping to increase the marketability of their product, began creating more and more ornate radiators—ones that boasted intricate decorative details—and billed them as beautiful in their own right. An ad for one such model read,“For beauty, richness and delicacy of ornamentation, elegance of proportion, finished smoothness of castings, appealing senses of lightness and gracefulness, the Verona is simply incomparable. It is a work of art in iron.”

Consumers didn’t quite buy the radiator-as-art tactic; they still struggled to make them fit in with their furnishings. So for a brief moment in time, homeowners desperate to solve this décor dilemma latched onto a novel idea: Splash radiators in elaborate color schemes in the hope of turning an eyesore into an accent piece.

The earliest technique for beautifying radiators with paint was called polychroming, from the Greek words many and color. It used two- and three-color paint combinations to highlight radiators’ unique architectural elements—the decorative scrollwork and ornamental floral reliefs that increasingly were molded into pieces to make them more appealing. Polychroming, which competed for a time with painting radiators gold in a technique known as bronzing, came into fashion after 1900.

Shortly thereafter, the American Radiator Company took the heating and ventilating grand prize at the Saint Louis World’s Fair in 1904 and published a souvenir book expounding on the beauty of radiators to celebrate the victory. The book featured colorful illustrations of radiators decked out in fashionable, bright hues—looking more like elaborately frosted cakes than clunky heating elements—and offered detailed instructions on how to achieve the same results at home. For a few years, polychroming became all the rage, until decorative radiator boxes became the preferred treatment.

While polychroming looks as though it involves a painstaking process, it is in fact a fairly straightforward technique to beautify radiators in three easy steps. First, using a brush, paint the entire radiator the color you want the finished ornamental detail (the raised filigree) to appear; let this coat dry completely. Second, paint the entire radiator the background, or main, color. Third, before this second coat of paint is fully dried and while it is still tacky, take a cloth or a sponge and wipe down the raised ornament to expose the color painted beneath (it takes a bit of practice to remove the background color from only the high spots). And voila—you have an intricately detailed radiator without a lot of expended effort. 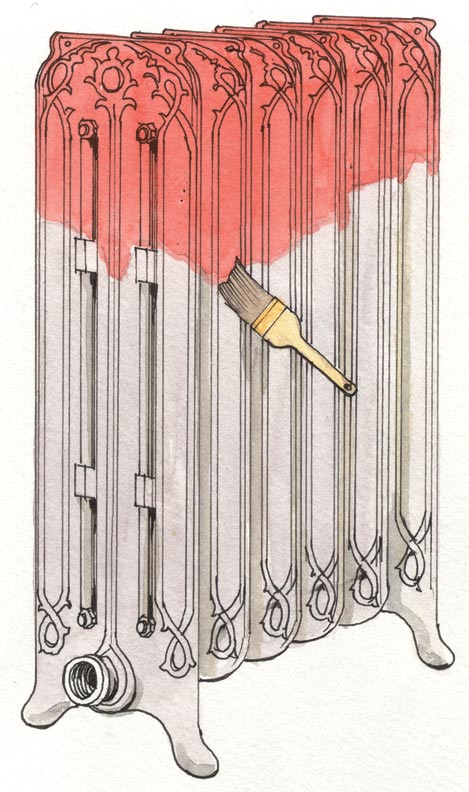 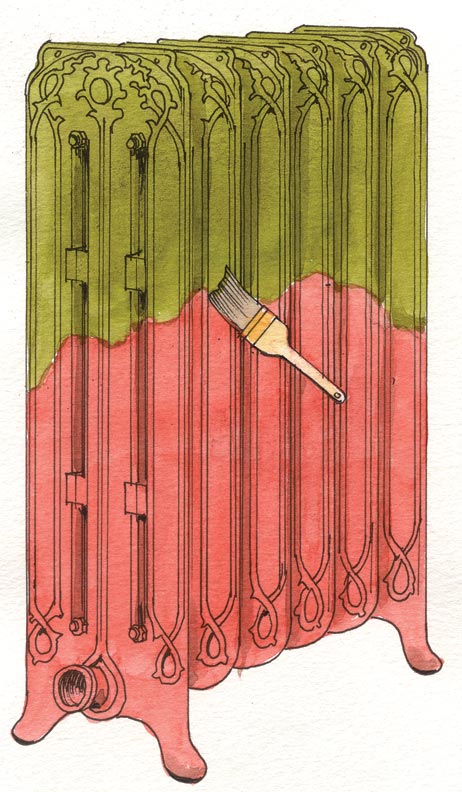 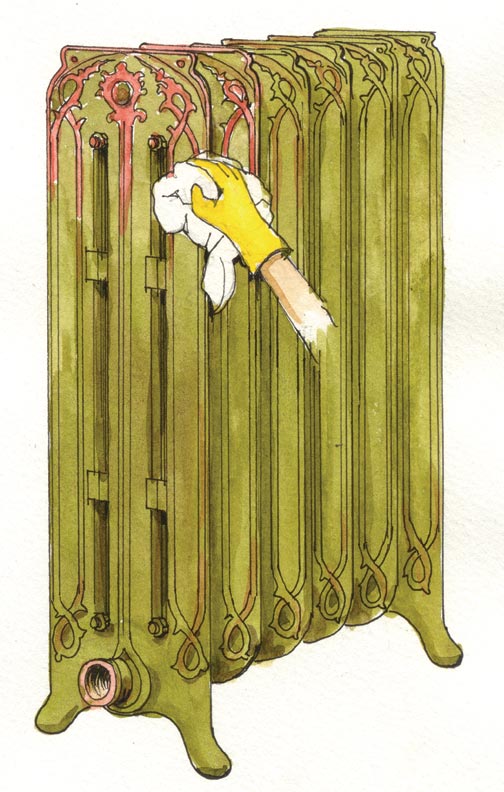 If you’re artistically inclined, you can also place some additional ornamental details freehand. An example from the American Radiator book shows green vines drawn with a flourish onto a white and blue painted radiator in order to accent the flowers and stems of the wallpaper behind it.

Polychroming had the effect of turning radiators into one of the grace notes of a room, bringing them out of hiding and into the limelight. The American Radiator book suggested a number of three-color schemes targeting the gamut of fashionable palettes popular at the turn of the century. A list of their selections (the first color was suggested for the background or main shade) included: red, brown, and gray; red, olive, and gray-blue; yellow, old rose, and white; terracotta, white, and soft green; sage, russet, and blue-green; blue, light olive, and plum; and green, violet, and soft gray. Color choice was important and was dictated by the decorative effect a homeowner wanted to achieve. Some people polychromed in colors designed to complement and augment the wallpaper; others picked completely contrasting shades, with the intention of having the radiators stand apart from the rest of the furnishings.

Stippling, for a Sun-Dappled Effect

A like-minded but more subtle technique for beautifying radiators was called stippling or sponging, and was intended to make radiators harmonize perfectly with their surrounding walls. Stippling was accomplished by blending two complementary paint colors for a two-toned, dappled effect—somewhat akin to sunlight warming a pitted stone surface—and was especially suited for rooms where the wall decoration was one of mottled and blended wallpapers.

The simplest method of stippling, also known as Tiffany glazing, is to first paint two solid covering coats of the background color. Once the background coats have dried, take a natural sea sponge that’s been cut across the grain (this provides a good, textured painting surface), dip it into a well of colored paint, tap it out a few times to remove any excess, then pat the sponge straight across the radiator without twisting or turning it. Continue working this way until the entire surface has been covered.

For added interest, a third color can be layered onto the radiator using the same sponging technique. The resulting mottled effect adds texture to the radiator, helping it harmonize with its surroundings. It’s also possible to do stippling over a polychromed radiator for an even more intricate effect.

There are some important points to remember when undertaking either of these radiator beautifying techniques. First, make sure the radiators are in good shape for refinishing—they must be thoroughly clean and free of grease and dust. Be sure to scrape and sandpaper any scaling or rusty spots. On the off-chance the radiators have never been painted, or if the finish is in very bad shape, apply a prime coat of rust-inhibiting metal paint.

Second, make sure you choose paints, including a prime coat, that can withstand the heat of the radiator. Also, it’s important to avoid using any water-based paint directly on the cast iron, as it can cause the metal to rust, which may then bleed through the paint. Paint only when radiators are off. Otherwise, their warmth will dry the paint too quickly. Keeping these simple guidelines in mind, you can use your imagination to make some creative color choices and turn your radiators into a modern-day fashion statement with an eye toward the past.