Whether a house is on the National Register or is simply from an earlier era, a host of factors must be considered even before interviewing a contractor or architect about building an addition. Site conditions, materials, budget, and how the new will relate to the old are issues as important as the program for use of new space.

The first is cost. Additions to historic houses are typically more expensive per square foot than those on newer homes. “If we’re talking about a historic house, we’re talking about historic appearance, materials, and character,” says David Heide of David Heide Design Studio. “There’s nothing basic about that. Everything [the owner] is trying to do with regard to their house has to be custom made. Each time you work with an old house it’s unique.”

Even a modest addition to an old house can be expensive. “The cost that comes with something like this is in the attention to detail,” agrees Howard L. Miller of The Johnson Partnership. Although the remodel (see Completing The Box below) was not even 100 square feet, “it cost a bunch of money because we carried over the details of the house.”

Old houses are also subject to more concealed conditions than are new ones. Examples include broken ridge boards (look for a telltale sag in the roofline), rotten floor joists, and obsolete wiring and plumbing. All must be addressed before new construction can begin, says architect Sandra Vitzthum. “Quite often, renovation can be more expensive than building from scratch.”

A good architect or contractor will talk about budget from the beginning, and once the initial plans have been thrashed out, will interview contractors and get estimates for the scope of work, says Miller. From there, the budget can be adjusted up or down depending on what the owner can afford or wants to do.

Since older houses in cities and towns are often built close together on lots that no longer conform to modern subdivision regulations, “the first thing we do is look at the lot lines, the size of the lot, and determine what the limitations are, including any height restrictions,” says Heide. “Any responsible architect should do that before the first meeting.”

It’s also helpful to have an architect or builder who has experience negotiating with local agencies to resolve building or zoning issues posed by a historic project. In Seattle, for example, many houses in older neighborhoods were built 3′ from the property line. Now the required setback is 5′, but “there’s a certain amount of accommodation in the Seattle city code,” says Miller. “If the house was already built at 3′ feet from the property line, they will let you extend your house at the old 3′ setback.”

Whether you work with an architect or not, it’s a good idea to find a contractor who is familiar with old-house issues. “I’m always impressed with a builder who, before they even start the addition, says ‘this existing floor is out of plumb by an inch and a half,’ ” says Heide.

A good contractor will understand the importance of leveling the floors between the original part of the house and the new one. “They plan for it,” continues Heide. Since old houses are rarely plumb, “sometimes it’s a combination of lifting one side and lowering the other.”

Arm yourself with knowledge to decide what elements of the existing house you want to keep, especially when dealing with a builder “who may have good intentions, but prefers to rip out the old because it’s less trouble,” says Vitzthum. “Plaster should be kept if at all possible. It’s actually more sound deadening than Sheetrock, and it’s an all-natural material.

“Quite often a contractor will say, ‘You’ve got to rip out the windows and walls and insulate’, but what they don’t tell you is that two-thirds of a building’s heat is lost through the roof. It makes so much more sense to leave the walls alone and put all of the effort into insulating the attic,” especially in colder climates.

Finally, be willing to discuss with your architect or contractor some of the intimate details of how you expect to live in the new space. Be ready to talk about money, privacy, and even parenting as well as your reasons for expanding the existing house. Sometimes a smaller addition or simply rearranging existing space can solve your issues with less fuss.

Bear in mind that the scale of any add-on should be appropriate to the original scale of the house. “You don’t want things disproportionate,” says Heide. “One should let the house tell the story of its evolution. But from our client’s perspective, if it’s seamless, we’ve succeeded.”

Addition Inside an Addition

Ill-conceived additions on a pristine early Cape had seriously compromised its integrity. A den and garage tacked on in the 1950s or ’60s had cut off all natural light to the dining room. The kitchen lacked storage and the house needed a mudroom.

Sandra Vitzthum, the architect who managed the project, solved most of the dilemmas in this 3-D puzzle with a surprising decision to relocate the kitchen to the despised dining-room space. “It was so dark, the owners wouldn’t eat there,” says Vitzthum. “We transformed it by making it the hub of the house.”

With the clients won over, all the walls between the old dining space, the family room, and the den came down. The floors were leveled and rebuilt, and new passages conceived to create more natural transitions between rooms. Now, “you can stand at any point in the new plan and look through to the other spaces.”

In retrospect, ”it probably would have cost less to demolish the den and start over. We found there were structural problems, but we couldn’t have known that until after we started.”

The new plan created a light and airy kitchen with plenty of storage space. Its vaulted ceilings spill additional light into the dining room, which has windows on two sides and opens onto a porch addition. Instead of the twisted route of dark rooms and dead ends the owners endured for years, each room segues effortlessly into the next.

Painting Inside the Lines

Old houses, even large ones, are often built too close to neighboring property lines according to present-day building codes. That was the case for this early 20th-century Arts & Crafts cottage. The existing porch, patio, and garage were mere feet from the back property line, and the garage and an embankment wall bordering the driveway stood flush with the side property line.

“This was a very complicated project,” says designer David Heide. Applying for and receiving variances to current setbacks was time consuming, taking three months. “Luckily we have experience working with the city and know what questions to ask. We have yet to be turned down.”

Once the approval process was underway, Heide demolished the existing garage and made plans to rebuild it below grade. In another complication, the soil underneath the new addition and new driveway had to be injected with chemical stabilizers to support the new construction. Since the retaining wall along the driveway literally sat on the property line, rebuilding it meant coming to an accommodation with the neighbors.

With site issues under control, Heide still had to find space for a new family room. He reclaimed the old step-down patio between the existing kitchen and dining room and extended it by creating a terrace on top of the garage. In keeping with the owners’ desire to entertain, the family and dining rooms open right onto the terrace.

On the interior, a once-awkward combination kitchen and family room has been redefined into a well-equipped period-style kitchen and adjacent breakfast room. Throughout the renovation, Heide carefully considered sight lines from all the rooms in the house toward the lake, choosing only the best. “It was pretty amazing, the views we were able to provide.”

Scope: Whole-house remodel and small addition to a 1903 “Seattle Box”

The four-bedroom plan on the second floor of this Seattle Box had been crowded by unnecessary hallways and poor use of space. By adding a small addition—literally just 8′ x 12’—architect Howard L. Miller was able to reconfigure the interior, filling in a missing piece of the exterior at the same time.

“We completed the Seattle Box,” says Miller, referring to the region’s name for its variant of the American Foursquare. “In this case, the square was missing one corner.”

The second floor now has a true master suite with a much larger closet and a real master bath, a large children’s bath and a guest bath, plus an upstairs laundry—all without reducing the size of any bedroom. Along with the small addition, eliminating about 6′ of hall space provided the space needed to make all the rooms work more comfortably.

As part of the new arrangement, Miller angled some of the entry doors to give the hall a stronger period feel. The original operable transom windows above the bedroom doors were reconditioned with new hardware, allowing for natural ventilation. 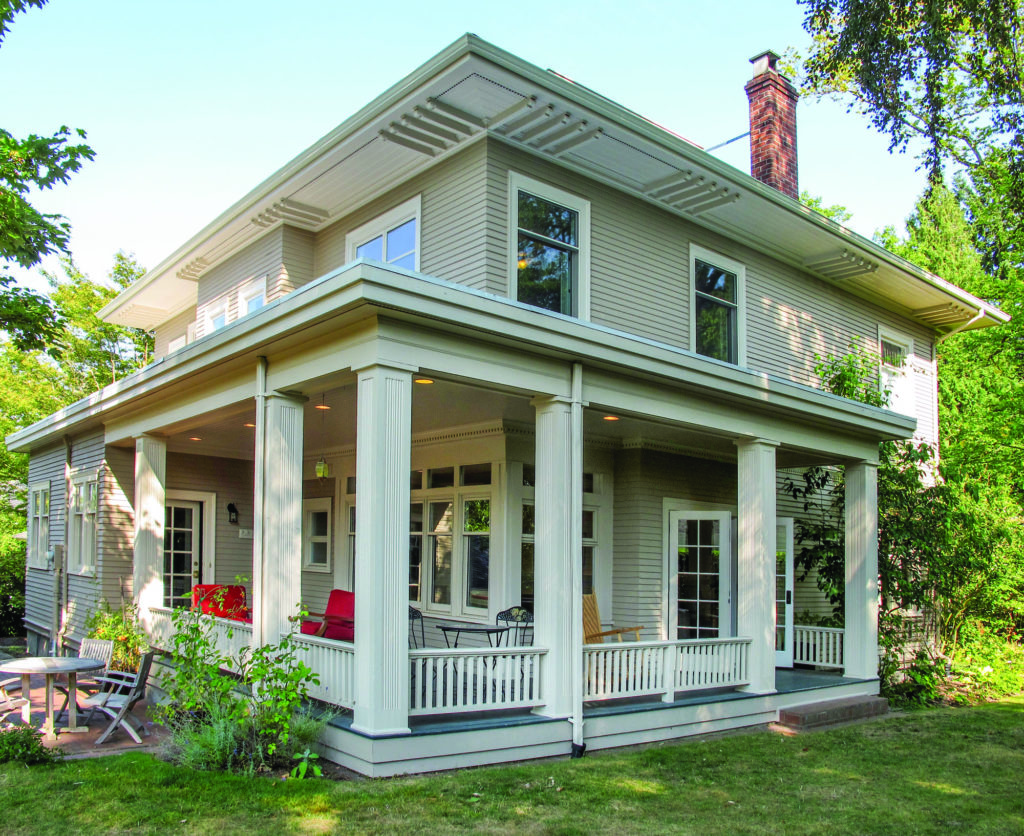 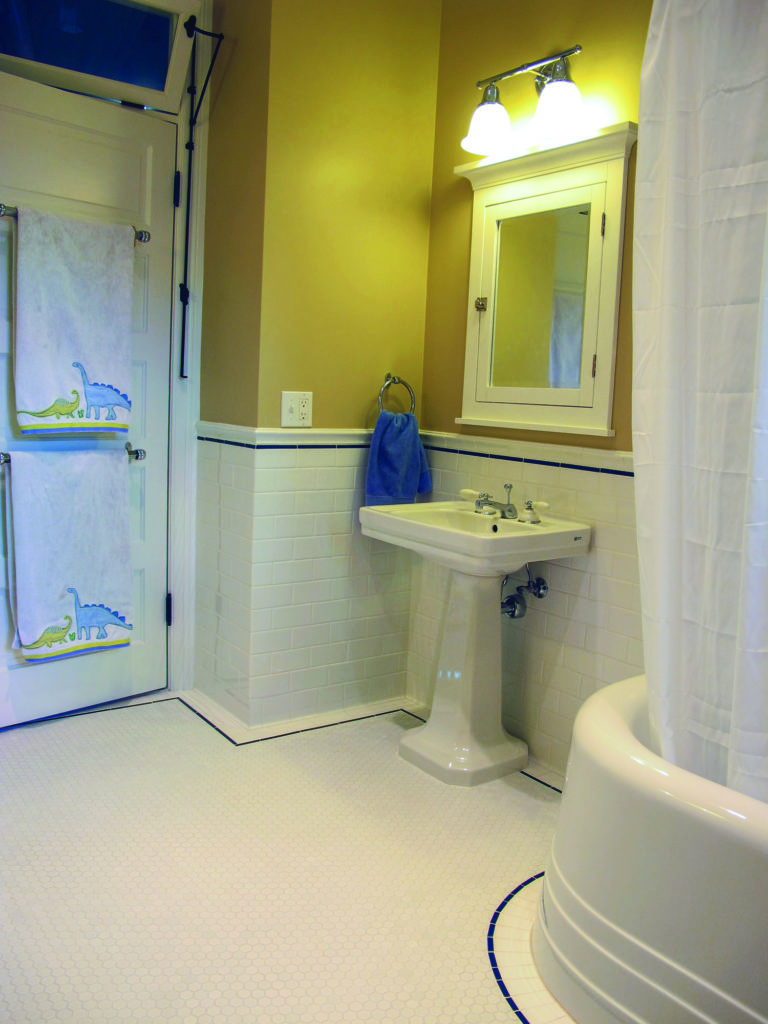 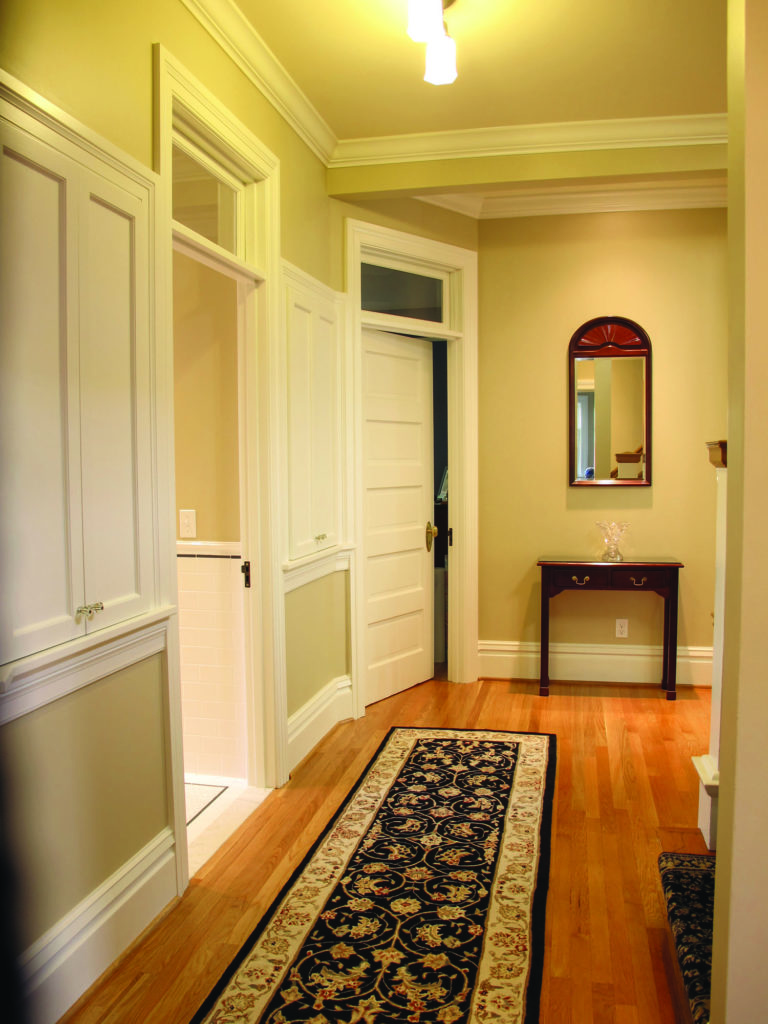 If it looks as though the addition was meant to be, it was. There was already a floor and foundation for the new space. “You can see the dashed line on the porch. That’s what squares up with the rest of the house.”

On the exterior, Miller repeated the design of beam ends under the eave line of the addition. “It helps tie the addition to the house.” A careful observer would notice that the spacing between the beam ends is a little off. That’s because the old ones weren’t moved. “We left them where they were. They aren’t exactly equal distance apart, but it’s hard to tell.”