When it comes to porch repair, the posts, decking, rails, and balusters tend to get all the attention. For some reason the porch roof—which protects those vital elements from rain, wind, and snow—gets scant coverage. That’s a shame, because neglecting the roof puts the entire structure at peril.

Telltale signs of a deteriorating porch roof include curled or missing shingles, moss growth, metal that’s rusty or in need of a good coat of paint, and roofing tar applied as a stop-gap measure. Peeling paint on the ceiling boards underneath may be a sign of moisture buildup or a roof leak.

Any roof that’s aged a century or more has likely been repeatedly patched or covered with new materials without the old having been removed, warns Andrew Curtis of Full Circa, a restoration specialist. “What you typically see on historic houses in Oregon is three layers of roofing material.” While a deteriorated soffit or broken piece of the entablature may have been replaced, “no one ever goes down to the bottom layer to make repairs.”

The porch roof is more than shelter. It is the first defense against the effects of water and ultraviolet light, protecting all the structural and decorative elements that can be expensive to replace.

When faced with crumbling layers of roofing over a suspect roof deck (sub-structure), Curtis and his team usually do a tear-off—that is, ripping the roof down to the old support system. This removes all accumulated layers of shingles, which trap moisture.

Inevitably, Curtis’s team finds corroded terne metal and rotted deck sheathing, especially toward the edges of the roof; damage to rafters underneath the sheathing; and plugged or damaged gutters. Before starting repairs to the roof, the foundation for the entire porch and any supporting columns must be assessed for damage and structural integrity. Usually the entire porch structure temporarily must be supported, sometimes with an extensive shoring system held in place by scaffolding. This allows work on all parts of the porch to proceed at once.

After all of the roofing layers have been removed, the team has access to the structural framework beneath, which includes the rafters on which the roof proper rests, as well as ceiling joists that support the porch ceiling underneath. The roof structure as a whole rests on beams (the entablature), which are in turn supported by the foundation below. The ceiling joists are laid out turned on edge, usually 2×6 or 2×8 tall, creating a flat, level framework for the rest of the work. If there are integral gutters, the ceiling joists are extended out over the beam so that the profiles of the gutters can be cut in.

All of the weight of the porch roof rests on the rafters, which tie in to the plate (or bed moulding) on top of the beam. Repairs are made using the old timbers as a model for the new. (You may want to lay the old framework of rafters on the ground and test-fit new rafters before installing them.)

The pitch is calculated and adjusted for proper drainage, starting at the center of the porch roof. Since the pitch can be as little as 1/8″ per foot, the Full Circa team often increases the slope of the gutters so that they’ll drain more efficiently—especially when internal gutters are intended to direct water toward vertical downspouts on the façade.

Once rafters are in place, the roof is sheathed with wood that closely matches the original in quality and thickness, whether it was an old form of plywood, or tongue-and-groove or shiplap. If the roof will be capped with metal, in most situations ½” thick plywood goes on top of the sheathing.

Next, an ice and water shield goes down, extending into the (rebuilt) internal gutters. The shield is a bituminous, sticky-backed material that can be nailed without leaking. The metal—either copper or 18- to 22-gauge galvanized metal—goes directly over the ice and water shield. Although either material is superior to the terne-plate of the past, galvanized metal must be primed before it goes down. Sheets are larger, creating fewer joints when riveted and soldered in place.

Pro Tip: Porches are designed to shed water and keep it moving away from the house. Water ponding on the roof will eventually saturate the wood—promoting fungal decay and intrusion by insects, and leading to leaks.

A porch roof can take many forms, from a tiny gable at the entry to a full-width construction that wraps around the house on two or more sides. The most recognizable type is probably the shed roof, where the roof slopes away from the house. Another simple form is the extension roof, where the porch roof is merely an extension of the roof of the house. Still others may accommodate roofed structures within the roof massing, such as gazebo bump-outs.

The pitch of a porch roof may be steep, shallow, or nearly flat. Some, especially those that wrap around two or more sides of the house, may have multiple pitches. Obviously, the amount of maintenance required varies depending on the complexity of the roof and how the structure is exposed to the elements. Common types include:

Extension a porch under the overhang of the house roof

Shed a roof with only one plane, attached to the house along a horizontal sill plate

Dual-pitched an extension roof with a change of pitch, often where the porch roof meets the house

Front Gable a porch roof under a full gable, with the same orientation as the house

Portico a porch or covered area supported entirely by columns

Pediment a porch roof with a triangular gable end, supported by columns

Rafter tails that present with extensive rot often can be patched with two-part wood epoxy, but sometimes the damage is too extensive. A time-honored technique to safely restore them—without taking the roof off—is called a Dutchman repair. If the rafter ends are structural, temporarily brace the roofline with 4×10 or 4×12 lumber. Remove any paint around the damaged area. Then chisel or saw away the decayed wood. Use the same type of wood for the repair, and make sure it’s seasoned to avoid shrinkage.

Cut out a piece of wood—the Dutchman—that’s slightly larger than the area of damage. Lay the Dutchman over the damaged area and scribe an outline into the original wood surface below. Next, follow the scribed line with a chisel or small handsaw to form an opening in the existing wood for the new lumber. Apply a fungicide to the old wood and allow it to dry. Then glue the Dutchman in place with a waterproof adhesive, such as an epoxy formulated for wood. Trim or sand the surface of the patch until it’s flush to the surrounding surfaces. Prime and paint all exposed wood.

Balustraded porches appear on house styles from Queen Anne to Colonial Revival. A sort of early deck, these uncovered structures tend to deteriorate much faster than other parts of the porch. For that reason, Andy Curtis of Full Circa re-creates each element of the balustrade in solid PVC, a material that has been recognized for years by the National Park Service as an appropriate replacement for wood in such situations. First, Curtis does some detective work to identify the scale and shape of missing pedestals, balusters, and railings. Old photos are ideal, but when none exists, he can often interpret the right size and shape from a ghosted shadow found on the structure. He also looks for the original placement of pedestals at exposed corners. (To prep the roof, its deck must be flashed or counter-flashed at points where pedestals will rest.) The originals usually lined up directly over columns below—an extension of those essential supports. “The evidence shows that the old builders were doing things better than modern practice.”

The failing cantilevered porch on a Spanish Colonial Revival house in Los Angeles looked to be beyond repair. Critical elements like the supporting rafters and porch posts were so badly decayed they were pocked with voids. One decorative corbel was so eroded, only a single screw held it in place. 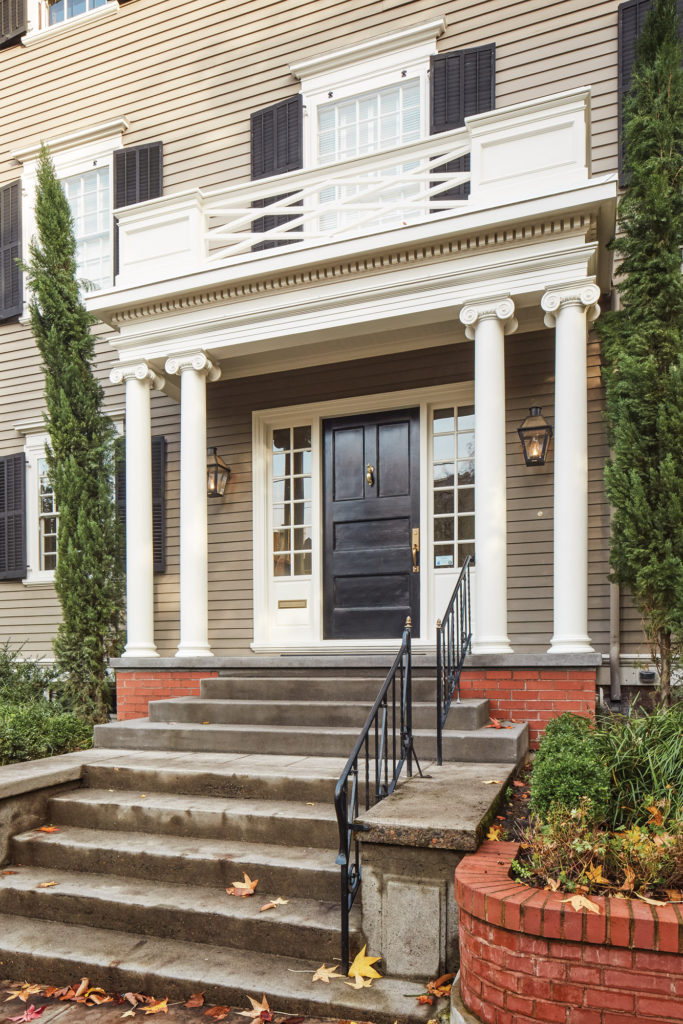 When Mark Sauer of Mark Sauer Construction took on the project, the goal was to preserve the most critical wood elements, especially the support rafters—which feature sculpted corbel ends. The team salvaged and reused as much of the original material as possible. Techniques included strengthening and filling old, punky wood with Abatron LiquidWood and Wood Epox, and making Dutchman repairs with and without supplemental use of those proprietary wood fillers. As a last option, any element beyond repair was replaced with in-kind wood (of the same species, shape, and dimension).

See a shop tour of Abatron

Before work began on the support rafters, Sauer and his team installed ” all-thread epoxy anchors for structural integrity. As a last touch after all the wood was stabilized and repaired, team members applied a texture to patched areas to re-create the appearance of wood grain.

Reconstructing a historic porch roof—especially one supported by period columns, like this one—often requires shoring up with extensive scaffolding during repairs. Work underway on an 1899 Colonial Revival house included an authentic restoration of the entry porch, extending to both the Ionic porch columns and the historic balustrade atop the roof. The entablature was painstakingly rebuilt with all damaged or missing details, including a row of dentils and missing mouldings.