Editor’s Note: Robert Picard recently passed away, after the visit with Perry Mastrovito and his camera. Robert’s wife, Michelle, asked that we share his story as a tribute to his passion.

Located in Lavaltrie, a small town along the St. Lawrence River fifty miles east of Montreal, it once was the home of the village schoolmaster, then converted into a general store in the mid-19th century. At that time, like today, the ground floor was divided in two sections, the store on the right side, private quarters on the other, except the general store has now been replaced by an antiques shop. Rooms downstairs hold amazing Canadiana and Quebecois folk art and furnishings.

Homeowner Robert Picard, a jovial 84 year old, specializes in 18th- and 19th-century crafts and furniture. He confesses to a passion for old things, which is the main reason he bought this house back in the 1960s. A “country boy” who wanted to go back to a simpler life, he made an offer by telephone, sight unseen (no internet or smartphones in those days). It was really cheap, he points out in explanation.

Still, he was dismayed by its poor condition on his first visit. But the location was ideal, and the work that lay ahead did not deter him. Shaded by tall deciduous trees and adorned with flower borders, the house is typical of Quebec architecture in the 1800s, though with a surprising number of windows for this period. While the exterior has been restored to its original state—roughcast for the façade, horizontal and vertical wood planks for the sides—the interior of the house has been modified to more modern standards. Some walls were removed to create sight lines; the basement was dug to make room for a workshop; attic space was converted into living quarters. Everywhere are the collections.

“In the ’60s, you could buy stuff by the truckload,” Picard explained. More recently, he found it harder to renew his stock, acquired mainly through people’s unwanted inheritance. But restoring and giving a new life to these valuable heirlooms was only part of his commitment to the preservation of Quebec’s heritage. Because of his extensive knowledge, Robert has often made appraisals for museums and insurance companies. His knowledge is firsthand, the result of his own research, study, and consultation with experts. There was very little information available, he notes, when his interest started in the 1960s. Picard also has lectured and written articles in collaboration with his wife, Michelle Bourdeau–Picard, who deeply shares the passion for antiques. “That’s why I married her,” Robert joked. In fact, they met while he was giving a course on furniture restoration, forty years ago.

Picard deplores the lack of interest in local craft, which often was associated with the hardships and poverty endured by so many. He said he was saddened whenever he learned of the disappearance of what might have been heirlooms, whether by fire or simple ignorance.

In the house, most furniture and decorations are authentic, dating to the 18th and 19th centuries. Collectibles came from all over Quebec and were made by craftsmen, not manufactured. Picard’s items get only the minimum amount of restoration; they are never stripped of paint, or varnished. Picard’s “trade secret” for conditioning wood is plain floor wax. As for the musty odor that often permeates old furniture, he has recommended using a mild disinfectant, such as diluted bleach.

The ground floor houses the antiques shop as well as the kitchen, an old-fashioned bathroom, and a drawing room dominated by an elegant Regency armoire. Comfortable armchairs provide a sense of intimacy, as this room is used essentially to receive and entertain guests. The kitchen is marvelously full, with a collection of antique trivets mounted on one wall. Plain pine cabinets recede under open shelves where spices, cooking implements, and collectibles mingle.

In the living room, opened up to reveal framing and beams, a beautiful old carpet covers the floor. Thousands of books (6,800, to be exact, some quite rare) line the shelves, most of them on the subject of antiquities. On one side of the room, the dining table and chairs date to the early 19th century and show their maturity. Beyond them, the sofa is from the early 20th century, because upholstered sofas were uncommon earlier—at least in rural areas like this.

The chimney that runs from the basement into the living room and up through the attic has an architectural peculiarity. It was built slightly crooked, not uncommon in the period, to prevent smoke from backing up into the room. But an old folk tale says that the offset was to keep witches from coming into the house through the chimney.

Either way, this house is bewitching, thanks to one man’s dedication to the good work of the past. 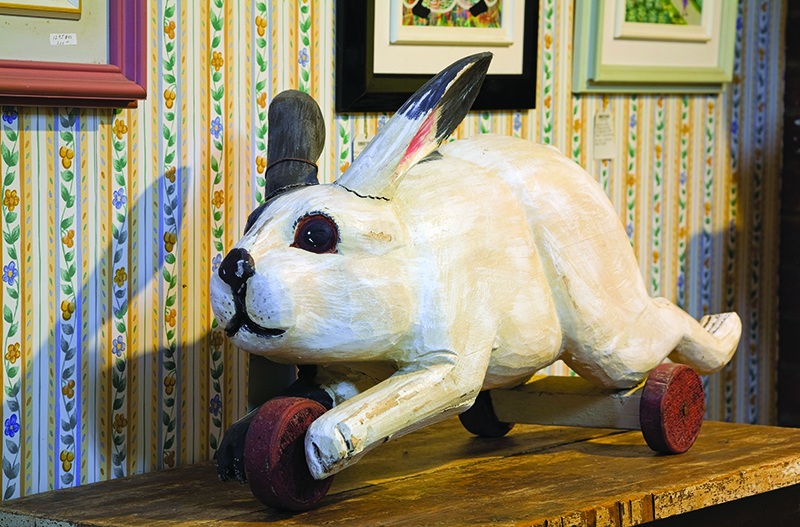