Houses from the 1850s represent an interesting era of buildings. Not only were they built across the full expanse of North America, but they often bridge a variety of styles and technologies, making them a challenge to restore. Because they are neither totally handmade, nor completely the products of steam-powered sawmills and millworks, they require a mixed bag of techniques and approaches, especially for addressing the realities of time, money, and modern lifestyles.

This is certainly the case for the Noah Rohrbach House. Though the house appears from the road to be stud-frame construction, it is actually a log house held up by immense oak timbers hand mortise-and-tenoned together in a heavy skeleton. Moreover, this log skeleton is actually recycled and relocated from a much earlier structure.

Clearly the complex mix of skills and techniques needed to repair such a building required the experience of specialists in the restoration of log houses, such as the folks at Preservation Associates, Inc. When we caught up with Douglass Reed and his crew, we got a quick education in several restoration methods they are using—both traditional and state-of-the-art—that can be applied to solve a variety of problems in many 19th-century houses.

What makes the Noah Rohrbach house such an interesting and challenging building is its surprising history and construction. Located within the environs of the Antietam National Battlefield, the house was already a fixture in the valley when Gen. George Mead stayed there in the 1860s. Studies of the building hardware, such as the bevel-sided, cast-iron rim locks, suggested a date of about 1850 for the current appearance.

However, once the failing plaster was removed indoors, the wall revealed a remarkable earlier life. Inspection of the 12”-thick walls showed the skeleton to be vertical-post log construction, a system where the horizontal logs are let into posts at corners and intermediate points in the wall, rather than, say, lapped with notches. This sophisticated system, which uses carefully constructed mortise-and-tenon joints, was common from the 1820s to the 1860s and represents some 5 percent of the log houses built in western Maryland.

What is even more unusual about the house is that there is no evidence of chinking or daubing in the spaces between logs. Typically, the timbers for a log house were cut, shaped, and erected while the logs were green, and the spaces between them filled with chinking of wood, stones, or mortar. Then, as the logs dried to their final dimensions over about two years, they shrank slightly, compressing the chinking. It was only after the frame had reached this stable dimension that the builders could add interior plaster and exterior siding. Since the Rohrbach House never had chinking, the logical conclusion is that builders applied the plaster and siding as soon as the frame was complete because the frame was already stable. Moreover, it was stable because it was fully dried, and it was dried, because these immense logs had been recycled from an earlier structure—judging by the evidence, an 18th-century log house.

Given the log construction of the Rohrbach House and its unique history, one of the challenges the project presented was how to repair parts of the timber frame without removing large sections of the basically sound exterior cladding. And repairs were indeed required. Though the house had been occupied up to the 1970s, since then termites had established major colonies in four areas of the house leading to severe damage to two vertical corner posts and two sets of foundation sills. To correct these conditions, the crew turned to modern materials and techniques.

The massive post in the northwest corner is a good example of one set of techniques. Since replacing this key member with a new piece of timber would have meant disturbing all of the framing connected to it, as well as peeling off exterior siding, the crew decided to leave the post in place, but relieve it of its job. To do this, they added sections of 2×8 lumber on two inside faces of the post in such a way that it took over the load-bearing work. Where the tenons of the mating horizontal logs were in good condition, they supported them with 2′ sections of lumber that, when stacked one over another, carried the loads of the corner down to the foundation. Where the horizontal timbers and tenons were in bad shape, they either reinforced them with epoxy consolidants or, in cases too far gone to revive, replaced them with a built-up assembly of 2x lumber.

Doug and his crew used modern pressure-treated structural lumber for this kind of repair but, surprisingly, not primarily for its rot-resistant qualities. Pressure-treated lumber is made from southern yellow pine—one of the strongest, densest woods—and is a good choice for the structural needs of this relatively heavy, nearly three-story house.

Modern pressure-treated lumber was also the material of choice for repairing the foundation sills on the southeast corner of the building. As is a common scenario with old houses, sections of original solid-timber sills supporting the Rohrbach House had to be completely replaced. While it was relatively easy, and minimally intrusive, to remove a few courses of the horizontal lapped siding to expose the sills, jacking up the walls to remove the deteriorated sill and introduce a new solid timber was not a good option for this log-frame building. Instead, Doug and his crew chose to build up a new sill by laminating several lengths of 2x pressure-treated lumber laid up on edge (see photo above). Using this method allowed them to remove and replace the old material a section at a time, without the work and disruption of temporarily supporting large sections of the house.

Once the four or five plies of 2x are in place, they are bolted, rather than nailed, together to form an integral member. With built-up beams and sills alike, the positioning of these bolts is important. They are located in the middle 1/3 of the planks—or about 3″ in from the edges of a 2×8—and spaced roughly 18″ apart in a staggered pattern. Such a pattern keeps the bolt holes out of the areas of the boards that do the load-carrying work of being in tension and compression, and the staggering reduces the chances of in-line bolts that might cause the wood to split.

Modern dimensional lumber worked fine for repairs in complicated and ultimately hidden areas of the house, but it did not present an option for an important historic and structural feature: the immense open cooking fireplace in the walk-out basement kitchen. This beautiful example of high-quality stone masonry formed part of the foundation of chimney, bake oven, and another hearth overhead, as well as the corner of the building. Unfortunately the same colony of termites that attacked the corner post had decimated the fireplace support structure as well, turning an 8′-long oak lintel over the hearth to a crumbling shell of wood dust.

Replacing the lintel in kind with another piece of solid oak was the only option, not only for historical authenticity, but because this member was also beveled on its hidden side to form the throat of the flue. To make such a replacement, Doug turned to the traditional skills of hewing timber by hand. 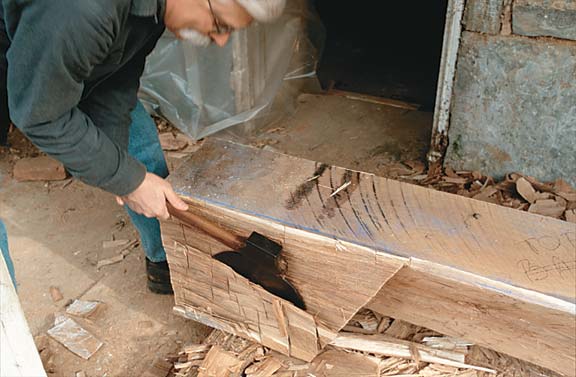 Hewing is the process of turning raw timber—the felled trunk of a tree—into large building members of regular dimensions that can be used for posts, sills, and beams. Timber hewing is a centuries-old technique that remained in use well into the era of water- and steam-powered sawmills. Even though shaping one or two sides of a 20′ tree with an axe is time-consuming and labor-intensive, for decades it was still less complicated than transporting a tree (usually cut not far from the building site) to a sawmill, and then back to the building site.

The steps and tools Doug uses to shape the lintel are the same ones used by the carpenters who hewed out the leviathan oak logs holding up the Rohrbach House. Starting with a freshly cut green log, Doug and his men measure off the dimensions of the face to be hewn by snapping off a chalk line. Next, Doug takes a pole axe with a straight handle about 30″ long (also called a felling axe), and mounts the top of the timber. Swinging the axe with the experience to control both the position and depth of the cuts, he scores the log in vertical lines, 3″ to 4″ apart. In a freshly felled log, these lines, known as kerfs, chip off most of the rounded portion of the log, leaving a rough but clearly flatter surface still showing score marks.

Once Doug has scored the entire side of the timber, he switches positions and tools. The broad axe he picks up is a tool with a large head and blade (9″ to 13″ long) but a comparatively short handle (around 24″ long). Moreover, the handle is bent where it comes out of the eye of the axe head, so the end of the handle is 3″ to 4″ offset from the blade. This allows users to avoid injuring their hands as they hew the timber. Moving aside the lintel, Doug works his way down the oak timber with the broad axe, hewing the rough side into a smooth flat surface while keeping it as vertical as possible. Here is where the skills of a good timber hewer reveal themselves. The final surface shows none of the earlier scoring cuts, because they were all made at a regular depth.

The last step for preparing the lintel is sealing the ends of the green log with wax. Doug and his crew use this step to slow down the drying of the timber so that it cures with a minimum of checks and splits. Contrary to popular belief, large timbers for barns, sills, and log houses were always hewn green, then allowed to dry out once assembled. It is much easier to shape green timber with axes and saws. Also, structural connections such as mortise-and-tenon joints were often designed so that they became tighter as the wood shrank.

As Doug Reed and his crew address the other structural repairs in the Rohrbach House, they continue with this same blend of traditional materials and methods augmented by state-of-the- art preservation techniques. A good example is the rebuilding of two of the porches. The graceful elevated front porch that spans the full width of the house was still largely intact, due in part to the careful water-shedding designs and meticulous pegged joints employed by the original builders. To rebuild a failing corner on the northeast end, the crew spliced in replacement joists of oak, using the same mortise-and-tenon joinery that had proved successful since 1850. On the back porch, however, where the framing would be completely new and hidden, they chose modern lumber.

Even here, though, longevity is in the details. Rather than simply spiking the 2x8s together face-to-face, Doug and his men took time to separate the planks with thin strips that create an exit path for any water or moisture that may come between the boards—because in a porch it inevitably will. It is just this kind of attention to detail that will keep this unique house standing well into the 22nd century.