It’s where a family’s private world collides with the public realm, where strangers are greeted with caution and visitors warmly met. It is designed to impress with architectural detail while always remaining in proportion to a home’s facade. As Steven Hendricks, owner of Historic Doors in Pennsylvania explains, “A successful doorway is a microcosm of a building’s entire design.”

In light of the front entry’s historic role as a status symbol, with handcrafted architectural flourishes abounding, it’s not surprising that achieving a successful new traditional entryway is no small task. This is why homeowners and even architects often rely on dedicated custom door manufacturers, who bring to the table specs and molding profiles culled from historic homes, well-equipped woodshops, access to top-grade woods and traditional glass types and an eye for critical details.

Door Style
“From a historical perspective, in the New World, door styles would have been on the rustic side simply because homeowners then were pioneers,” says Hendricks. “But at the same time, these pioneers came from cultures with highly developed and sophisticated architectural styles in full flower.

“As American culture became more of a civilization than a pioneer environment,” he adds, “citizens began using architectural symbols to convey not just wealth and status but also more humane communications, such as ‘This is how you approach my building,’” A logical design hierarchy also differentiated the formal front entry from more utilitarian entrances.

America’s earliest doors were plank-style, with vertical boards held together by horizontal battens. Or, if defense was crucial, cross-boarding provided even more security. When the Georgian style took hold, the familiar raised-panel door became popular. It represented a technological improvement over plank-style in that its floating panels remained airtight while still allowing for wood’s seasonal expansion and contraction.

Each architectural movement boasts its own influence on front entries, with many adding complexities such as top and side transoms as well as fanlights. Tim Forster of HeartWood Fine Windows and Doors in Rochester, New York, notes that his company’s “Door Idea Book” contains up to 850 door styles. “You can search on our website using key words like Dutch or Gothic and you’ll get pages of results to review,” he explains. “Architects with an account can also download CAD elevations.”

Similarly, in the 1990s, Historic Doors began assembling its own collection of recorded entries, which includes more than 200 measured drawings from the Historic American Buildings Survey collection. These drawings, catalogued by architectural style, include all of the molding profiles used to compose each doorway as well as building elevations.

Although the finished project is a tremendous resource, it’s not meant as a product catalog by any means. “Most of the designs are more ornate than people would choose or be able to afford,” says Hendricks. “But the examples provide good rules of thumb regarding molding profiles and proportions.”

Coordinating an entry door with a house’s windows is a consideration as well. “Having door muntin bars, glass options, and casing details match a home’s windows is an important part of getting a building to look architecturally correct,” says Andy Keeffe of Vermont-based Green Mountain Window. “Often, when doors and windows are purchased from a different company, a discerning eye can tell that something seems ‘off’ on the building.” 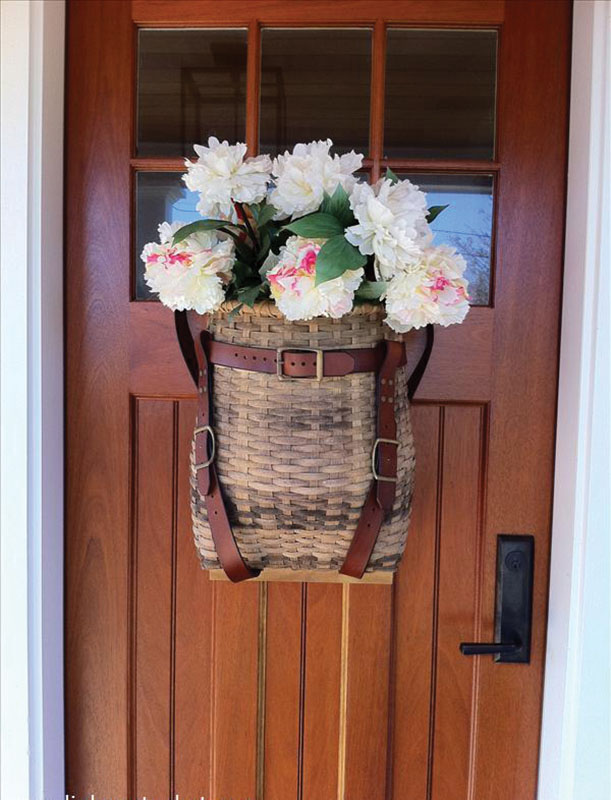 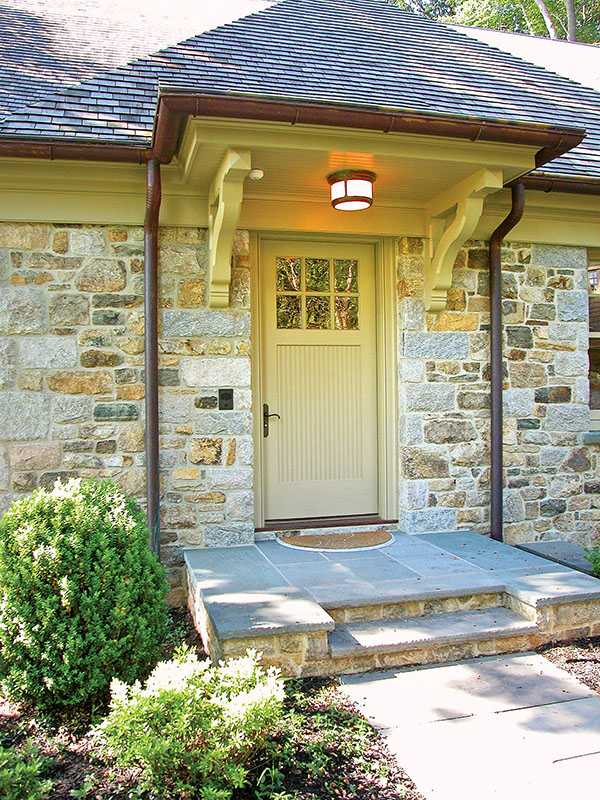 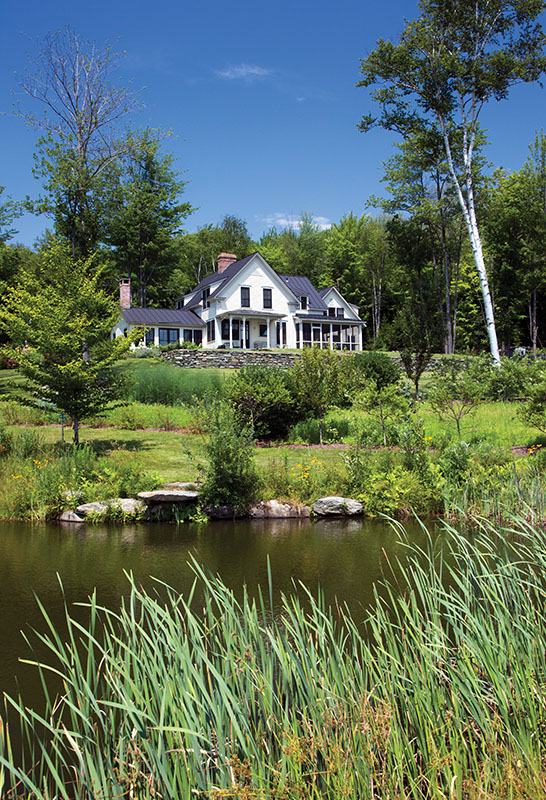 Construction & Materials
An entry door that impresses with historic appropriateness is as much about construction as it is style.

Specifying the type of wood used to construct a traditional door is a vital step, not only in terms of appearance but also for longevity. “South American mahogany is the benchmark for door and window building because it’s very stable, it has low-margin shrinks and swells, it has dimensional stability and an inherent resistance to bacteria and bugs,” says Forster, who warns that not every wood on the market labeled mahogany is part of this genus.

Quartersawn white oak, which is indigenous to the Northeast and also Canada, and American black cherry are also popular wood types. A manufacturer like HeartWood is capable of working with a variety of woods, depending on customer preference, such as butternut, teak, cypress, and cedar. Reclaimed woods are also an excellent option.

And there are even more details to consider. True divided lights, with a variety of glasses, from bulls-eye to beveled, are an important part of the new-old equation. A solid wood sill, whether crafted from mahogany or even fir or pine for paint-grade doors, and hardware add polish to a period look.

Scale
Historically, doors had to accommodate everything from furniture to large parcels of firewood to hoop skirts, which is why double doors were sometimes used. “We’ve found through our research of early American doors that 40″ was a common size, in comparison to today’s 36″ stock exterior door,” says Hendricks. “A classical rule of thumb when designing doors is to use double squares, which is why 40″ x 80″ gives a nice proportion, versus today’s 36″ x 80″ stock exterior door.”

Meanwhile, door thickness can be all over the place. “Modern standards, in terms of how the hardware manufacturers have summarized things for us, are an 1¾” or 2¼”. We have a general rule of thumb that a door up to 36″ wide can be 1¾” thick unless it’s taller than 7′, which is when we recommend going to 2¼”.”

But the beauty of a custom door is that anything is possible. As an example, HeartWood Fine Windows and Doors recently crafted a custom round-top door with tongue-and-groove paneling that measures 4′ x 8′, is 3″ thick, and weighs 300 pounds. Its knocker is 7″ in diameter and its handle probably weighs more than 50 pounds.

Porches & Porticos
There are a variety of benefits to enveloping a front door with an outdoor vestibule, and there is a great deal of historic precedent as well. “Porches were not terribly common until the 1840s, when Americans became more and more obsessed with etiquette and the veranda became popular,” says Vermont-based architect Sandra Vitzthum.

In terms of etiquette, porches are very welcoming because they protect guests from unpleasant outdoor elements. But architecturally, they represent a zone of mediated scale. “You go from the huge scale of a front yard or street to the much smaller, more embracing scale of an interior. The porch mediates this transition so that it’s not such an abrupt change. It’s also a form of politeness: giving people the chance to adjust to scale.”

And while a porch’s design should be appropriate to the rest of the house, there are examples of differing yet complementary styles from later-edition porches. For example, you might see an Italianate or Gothic porch on an earlier house, notes the architect, “and that’s OK.”

As Hendricks points out in his own essay on historic doors titled Point of Entry, “Specifiers of wood doors should be mindful of exposure to the elements. Protecting the door with a porch or hood, or by setting it back within the exterior wall, were all design elements employed in earlier times to help maintain the entry.”

Keeping a wooden door safe from UV light and water requires regular maintenance but the rewards are lasting and the effect is timeless.

For clients in the tri-state area, the Bendheim showroom located at the heart of Tribeca in New York City is worth a visit. With over 2,000 samples of specialty glass in more than 2,500 square feet of space, the showroom has been called a candy store for architects. To provide hands-on experience, the glass is displayed in a variety of contexts including wall mounted, in a backsplash, or inserted into a tray to be viewed through different lighting such as halogen, fluorescent, and incandescent.

Homeowners living in other parts of the country can browse the Bendheim Cabinet Glass website, which offers more than 150 glass options for the home, handy do-it-yourself instructions and an easy checkout process. The EcoGlass Coral for instance, pictured here, is available in three glass types, including the Laminated Safety glass option, which is 3⁄8″ thick and will hold fragments together upon impact making it perfect for entryway sidelights and transoms. For more information, visit bendheim.com.