Evolution of the American Window

The windows on historic homes are products of the materials and technology available at the time of construction. Before roughly 1850, the materials were simple: old-growth lumber, precious hand-blown glass, and linseed oil-based putty. Building a window was challenging but low-tech, the task of highly skilled sash makers working with hand tools to compose a complex framework designed to hold individually cut panes of glass.

All of the wood components—bottom and top rails, the vertical side rails called stiles, and the dividers known as muntins—were through-mortised. That means that the connecting joints, the tenons, extended completely through the adjoining stile or rail and were visible along sash edges. In an era before water-resistant glues, joints were secured with pegs and tightened with wedges. As Steve Jordan writes in The Window Sash Bible, outfitting a house in 1750 or 1800 with windows was easily the most expensive component of construction.

The further back in time you go, the more expensive the glass and the smaller the window panes, or lights. The shaped wood dividers called muntins that held the glass in place changed over time, too. Eighteenth-century muntins were thick with short and rounded ovolo mouldings. By late in that century, as glass became slightly more affordable, window panes grew larger and longer, and the proportions of the muntins more grew more graceful as well.

Machine-blown cylinder glass became widely available near the end of the 19th century, about the same time that advances in millwork technology led to standardization in building components from door casements to interior colonnades. The thickness of window sash went from a variable 1¼” to a uniform 13⁄8″. After the Civil War, weight-and-pulley counter balances made it possible to operate a sash window with the lift of a hand.

Construction methods and materials for residential window construction changed little for the next hundred years—despite various inventions that claimed to improve on the rope-and-pulley system. They include some technologies you may find in your windows, including spring balances, spring-tension wheels, and pivoting hardware.

Window construction began to change in the early 20th century when the first flat-drawn sheet glass went into production about 1917, putting an end to variations in thickness and flaws that effect clarity. Clever manufacturers introduced metal windows. Some, like steel, held up well over time; others were composed of metals with various parts that tended to fail with repeated use or age-induced fatigue. Finally, large sheets of flat, perfectly uniform glass made by the float method transformed the window glass market in the early 1960s.

What does all this history mean for the windows on your house? If the originals are still there and in good condition, count yourself lucky. Original windows on a house built before 1950 are usually well matched to the rest of the house in terms of building materials, quality, and appearance. They are also sustainable and expensive to replace with windows of similar quality.

If, however, your home has suffered the loss of original windows to “replacements”, a dilemma is coming, and sooner than you might realize. Even the best replacement windows aren’t guaranteed to last for more than 25 years. If your windows are failing or an addition is in the works, shop wisely. 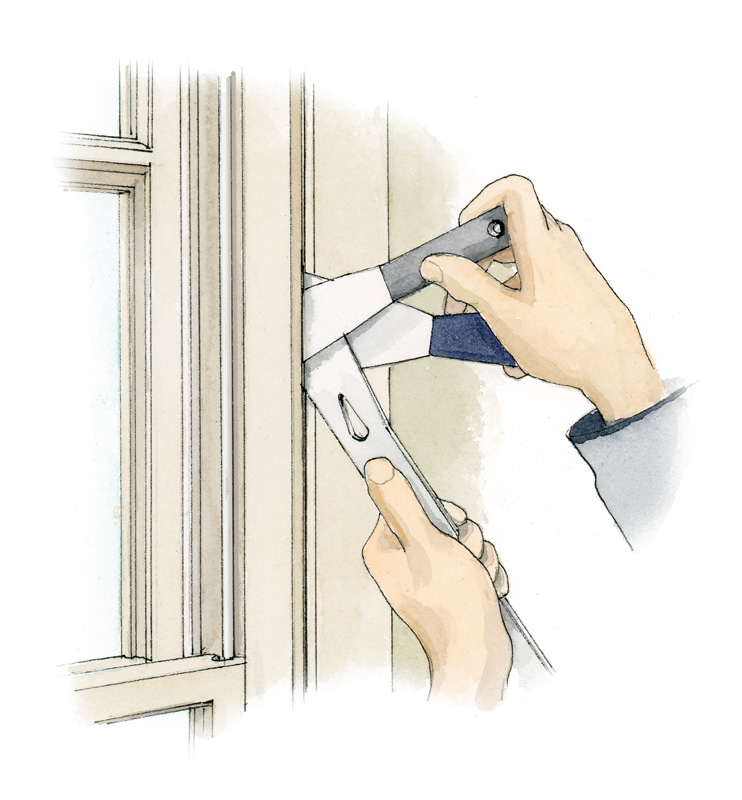 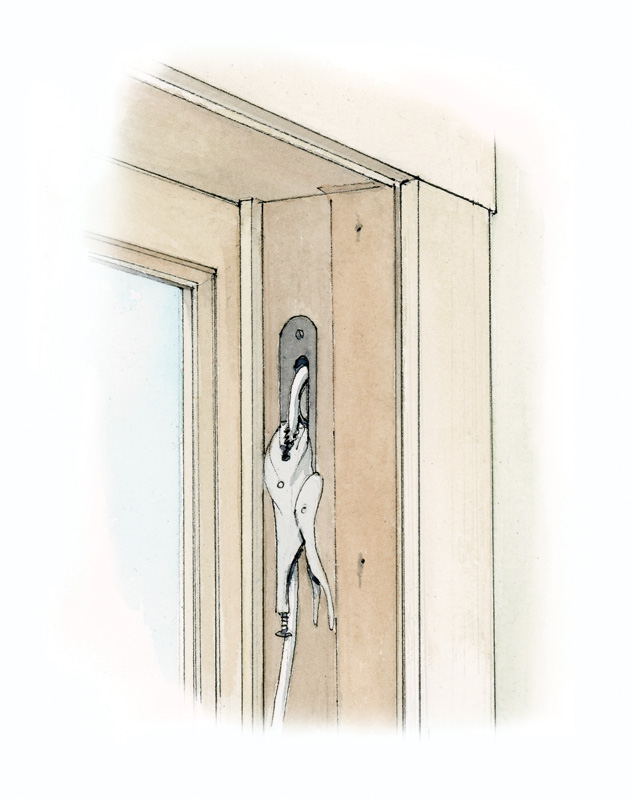 To restring the weights that make a counter-balanced system operate smoothly, you’ll need access to the hidden panel that hides the weights and ropes. First, identify the stop moulding, the vertical strip on the window frame against which the sash slides. If it is screwed in place, remove the screws. Score the paint or varnish at any joints to loosen them. Then pry off the stop moulding by sliding a flat prybar between two putty knives behind the joint. (The knives protect the wood.) With luck, any nails may pop off with the wood. Once loose, bow the strip it to release the ends.

With one stop removed, you should be able to swing the lower sash out of the way, dangling from its two cords—if they’re still attached—to access the panel. Before detaching the cord from the pulley and weight, clamp the cord to keep the weight from falling into the weight chamber.

With the stop removed and the sash out of the way, look for a small door sitting in the bottom of the sash channel secured with a screw. Remove the screw. As you reach for the cords inside the weight pocket, note which weight goes with each sash, or mark them unobtrusively. (If you accidentally switch weights among sashes, the balance system won’t work properly.)

To restring the top sash, remove the parting bead on one side. The parting bead (a narrow strip of moulding on the far side of the pulley housing) holds the top sash in place. It’s usually not nailed, but may be stuck in place by paint. Score the joints and slowly pry it out using a putty knife or pliers.

Once you have the sashes, stop, and parting bead out, you can restring the weights. First, replace worn or painted sash cord with new rope cord (Spot Cord from Samson Rope, in business since 1888, is one brand: samsonrope.com). Cut the new cord to the length of the old one. If the cord is missing, measure from the knot pocket on the sash stile to the top rail, and from the window header to the sill. Add the two measurements together to get an approximate length for the new cord.

After locating the weights, feed a new length of rope through the pulley at the top down into the weight pocket until it reaches the weights. Then thread the rope through the eyelet on the top of the weight and tie it off with a secure knot. Swing the weight back into the pocket, then reinstall all the parts in reverse order. Once the sash is in place, nail or screw the stops snug to the bottom of the sash. Slide the sashes up and down a few times to make sure everything fits and works effortlessly.

Muntins Through Time
Even if you’ve never noticed them before, the shape of the window muntins may be the key to identifying the style of an entire house. The earliest muntins were squat and fat, and they grew more graceful in the early 19th century. By the early 20th, the muntin profile on Colonial Revival houses had evolved into a composite of several styles.

Anatomy of a Window
The double-hung sash window is still the most common window found on American homes. Once the technology had been perfected about 1850, window components and construction methods didn’t change much for over a hundred years.

Option B
POACHER’S KNOT
Thread though weight. Wrap
loose end around twice,
then thread the loose end up
through loops. Pull tight.

Is your house already fitted out with replacement windows in need of repair? If the problems are minor—missing or broken locks or tabs, torn screens, lost window stops—you may be able to get replacements from a parts dealer for your brand. Parts for Hurd’s awning, aluminum-clad, and clad-wood windows, for example, are available through Hurd Replacement Parts (hurdreplacementparts.com); parts for Andersen Windows’ 200 double-hung sash series are available from Forrest Construction (awindowanddoorparts.com). A good window or door shop may be able to make more significant repairs for you, provided they can find and order the right parts. Sifting through the possibilities takes a computer search: One current window hardware catalog has more than 40,000 window and door parts in inventory.

Sticky Sashes
Moving window sashes up and down will inevitably weaken the structure of the sash frames if not done properly. Banging on the sash or jerking up or down when the frame is out of true (or crooked) will eventually destroy it. One simple solution is to install sash lifts on the bottom rail. They should be positioned so that using them lifts the window straight up.

Retrofitting Tips
Any of the following retrofits will improve interior comfort and reduce energy costs without the need to replace original windows.

Exterior (Storm) Windows
Estimated energy savings: 17-19%
An exterior storm window is a glazed unit of wood or metal that fits tightly over an existing window. Whether manufactured or built by hand, exterior storms improve the thermal performance and air-tightness of existing windows, boosting energy savings close to that of new replacement windows. They also reduce drafts and provide some protection for old windows. Fixed-panel types must be installed and removed seasonally in order to use the window.

Interior Window Panels
Estimated energy savings: 15-23%
Panels of acrylic, polycarbonate, or glass install by spring tension or flexible compression on the indoor side of an existing window. Like exterior storm windows, they improve thermal performance, air-tightness, and interior comfort. While not quite as energy efficient as exterior storms, they’re easier to install and do not compromise the appearance of the window. They also provide noise reduction. On the downside, some plastic versions may reduce visibility; fixed panels may need to be changed seasonally.

Insulating/Cellular Shades
Estimated energy savings: 10-13%
These accordion-like blinds improve thermal performance and minimize drafts when in use. They’re best for keeping out the cold at night or, in a hot climate, the heat at midday. From an aesthetic standpoint, they rarely complement historic decorating; consider hanging lace panels over them.

casement  A window that swings on hinges, opening like a door.
double hung  A window with an outside sash that slides down and an inside one that slides up, usually controlled by chains or ropes on pulleys, with a counterbalance weight.
fenestration  The art of placing window openings in a building wall, and one of the most important elements in creating the exterior appearance of a house.
glazing  The process of installing glass panes in windows and applying putty to hold the glass in position; also, the glass surface of a glazed opening.
jamb  The upright pieces or surfaces forming the sides of the window opening.
light  The pane of glass in a window sash.
muntin  The shaped wood strips that separate (and hold in place) the panes of glass in a window sash.
mullion  Not to be confused with muntin, this is a dividing member between individual windows in a group.
parting bead  A long narrow strip between the upper and lower sashes in a double-hung window frame, which enables the sashes to slide past each other.
rail  A horizontal member in a door or window sash.
sash  The framework that holds window glass in place
sash weight  A heavy cast-iron counterweight that, together with a sash cord and pulley, holds a window sash in the raised position.
stile  The vertical side members that interlock with rails in a window frame.
stop/stop bead  A vertical wood strip on a window frame against which the sash slides.

Light Reading
Want a detailed guide to maintaining and restoring historic windows? You can’t go wrong with The Window Sash Bible (2015) by long-time OHJ contributor Steve Jordan. Packed with tips for windows built between 1800 and 1940, the book is a primer on understanding how old windows were made and how to evaluate and repair them. Through your local bookseller or at amazon.com

How to Update a Steam-Heating System

How To Build a Historic Fence

How To Re-Create a Georgian Window Pediment

How to Create Attic Storage