By Old House Journal Review Team
Show contents
What Are the Best Bleach in 2023?

Bleach, among all the home chemicals available today, is one of the most versatile and effective. Whether it’s a grassy stain on a white blouse or a dirty ceramic toilet bowl, bleach has an impact on almost everything. Great bleach, in any form, is a strong disinfectant and fabric whitener that needs to be treated with care.

Sodium hypochlorite, sometimes known as chlorine, is used in certain bleach formulations. Because chlorine affects the chemical colors in textiles, chlorine bleaches perform effectively as whitening agents in the laundry. Chlorine bleach is also a powerful antibacterial. Other bleaches include hydrogen peroxide, which acts as a fabric oxygenator.

Non-chlorine bleaches are preferable to use on colored fabrics. If you’re looking for an efficient bleach, whether for washing or cleaning up, read our buying guide to review our favorite bleaches on the market in 2023. 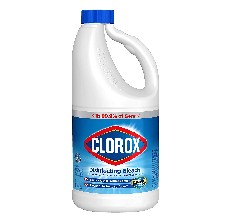 Clorox Disinfecting Bleach eliminates 99.9% of germs and bacteria in the home. It disinfects, deodorizes, whitens, and eliminates stains while cleaning. This bleach brightens whites, keeps clothing whiter for longer, and eliminates 70% more stains than regular detergent. It removes those stubborn laundry stains from all of your white clothing.

It’s fine to use in both conventional and high-efficiency washers. This product also contains CloroMax Technology, which protects home surfaces while cleaning, prevents stains, and makes cleanup simpler. This bleach does a great job, as it disinfects and deodorizes surfaces and eliminates 99.9% of mold and bacteria on home surfaces including counters, surfaces, bathrooms, and more. This choice will show you the power of cleanliness.

Pure Bright Bleach is a cost-effective option, while being powerful enough to cleanse and disinfect restrooms, shower stalls, bathrooms, worktops, and kitchen work surfaces. This germicidal bleach is efficient as a sanitizer against pathogens including E Coli, Rotavirus, typhoid, staphylococcus, and Hepatitis A, to mention a few.

This bleach is also great for laundry, as it will brighten and whiten your whites, while also disinfecting any of your white dirty laundry. Another thing to note is that this choice comes in a case of 6 1-gallon bottles. 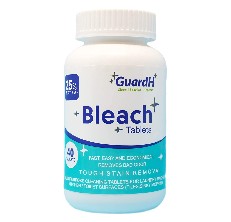 These tablets are packaged in a high-quality jar with a child-resistant cover that also ensures long-term effectiveness. These bleach tablets are also less expensive than fluid bleach, bleach granules, or bleach packages.

The Grab Green Natural Laundry Whitener is an environmentally friendly option for families who wish to keep their home items natural and avoid using bleach in their laundry. There are no chlorine, phosphates, optical whiteners, or dyes in these pods; all of the chemicals used in the whitening pods are mineral and plant-based.

You can put one of these pods in the sink with water and give your clothes a good pre-soak for those especially tough stains. Alternatively, toss one of these pods with your clothes, either colors or whites, in your washer and start your laundry. These are a great option if you want bright washing without harsh chemicals or unpleasant accidents. 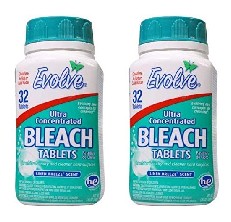 Evolve Bleach Tablets are a great way to bleach white and bleachable clothes without the mess that liquid bleach may produce. These tablets are phosphate-free and easy to use. This product is excellent for cleaning and deodorizing restaurants, cooking utensils, washing tubs, and other industrial cleaning applications. They’re also effective for cleaning toilets, glass, children’s toys, and other surface materials.

Another plus is your clothes and washing machine will also smell fresh after using this solution. This product is a strong answer for all of your cleaning requirements around the house, as it’s cost-effective, extremely concentrated, and capable of producing several times the number of liquid bleach cleansers.

Buying Guide for the Best Bleaches

Bleach is a must-have in most cleaning supplies, but picking the correct type can be difficult. Whether you want to get your white dress shirt looking brand new or sanitize your exercise socks, the goal of the washing process should help guide your decision. Before adding it to your wash, think about other aspects including your skin’s sensitivity. Below is a buyer’s guide to select the perfect bleach for your laundry.

What Are the Different Forms of Bleach Available?

Since bleach, particularly when concentrated or undiluted, may be difficult to administer properly, manufacturers frequently provide a variety of container choices.

A liquid concentration packed in a plastic jug is the most common form of chlorinated bleach. Although concentrated bleach could be used for a few sanitizing purposes, most people blend it with water. To avoid splash-back or spilling, the liquid must be poured gently.

Solid pills of bleach are also available, which are easier to handle and may be used in washing machines or toilet tanks. Some people mix the pills with water to make a disinfectant spray. Chlorine and non-chlorine bleach can be purchased in water-soluble pods, powders, or crystals for use in laundry.

One form of stain treating bleach that’s becoming increasingly popular is a splash-less solution that might be dispensed like a dishwashing liquid or poured in a handheld pen for stain removal. Bleach-infused wipes and bleach-based sprays are used for cleaning surfaces.

Components To Think About When Purchasing Bleach

Expiration dates should be written on both chlorine and non-chlorine bleaches. Generally, a bleach should have a shelf life of twelve months if properly kept. Non-chlorine formulations, on the other hand, may lose part of their effectiveness sooner. It is ideal to store your bleach concentrated or undiluted until you are ready to use it.

The chemical odor of concentrated chlorine bleach is similar to that of ammonia. The usual bottle of chlorine bleach has 5.25% sodium hypochlorite, although some stronger formulations may have as much as 6% or more. Aromatic bleaches are available, especially for laundry use; however, their effectiveness could well be compromised.

Chemicals are used in certain bleaches, whereas organic substances are used in others. Because bleach is a powerful chemical, caution should be exercised while using chemical-based bleach. Bleach has a strong stench and can occasionally harm garments, despite its effectiveness in the whitening laundry. Organic bleaches are also efficient in brightening garments and don’t contain harsh chemicals or smells.

Some bleaches are also acceptable for use on colored apparel in addition to enhancing white garments. Color-safe bleaches can brighten, restore color, and remove stains from white and colorful clothes.

The basic chemical formula for washing bleach featured sodium hypochlorite, a very strong compound. Chlorine-based bleaches are particularly powerful in stain removal and disinfection, although they can be overpowering in some situations.

Chlorine bleach may cause colored fabrics to fade and is quite toxic when used undiluted. When using chlorine bleach, users should wear protective clothing to avoid splash-back, spillage, or intense fumes.

During the wash cycle, the extra oxygen interacts with the cloth fibers, releasing oils, dirt, and other pollutants. While non-chlorine bleaches have some disinfectant properties, they are most commonly employed in the laundry as color enhancers. However, they might not be quite as efficient as chlorine bleach at removing stains.

What Are Some Tips for Safe and Effective Cleaning With Bleach?

Here are several suggestions for using bleach in a sensible way:

What Is the Price Range of Bleach?

Q: How does bleach function?

A: Bleach is a substance that comes in a variety of forms and is used to brighten colors, particularly white clothes, in washing. These products are deep cleaners that aid in the removal of any remaining layers of filth, dust, and mud that may be discoloring your clothing.

Q: What can I use to whiten my clothing instead of bleach?

A: A strong combination made from hydrogen peroxide and Dawn can be applied on collars and underarms to help erase discoloration. Use ½ cup of vinegar or bicarbonate soda to your laundry to lighten and help soften your garments. Make sure you just use one of these at a time and don't combine them. Half a cup is a decent starting point, but depending on the size of your load of laundry, you may have to adjust.

Q: Why do all of my clothing become white when I use chlorine bleach?

A: The whitening action of chlorine bleach can be explained in two ways. Sodium hypochlorite is a chemical found in chlorine bleach and may harm a wide range of textiles and dissolve garment colors. Bleach also alters the material's light reflection, giving the appearance of a brighter shade of white to our eyes.

Q: Is it true that baking soda whitens clothes?

A: Baking soda may be used to whiten clothing instead of bleach. To whiten, brighten, and soften garments, add baking soda to a cycle of washing. If you have small, stubborn spots, you can make a paste with baking soda and water and put it directly on the spot. Baking soda is safe to use on all colors of clothing and will not bleach them. 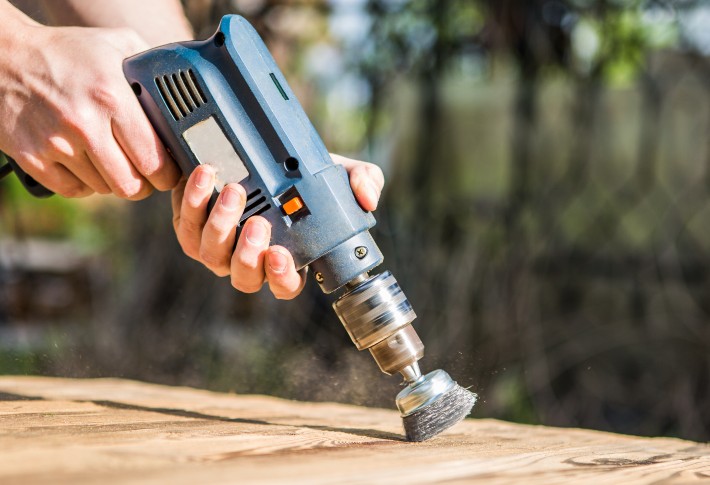 Clean Your House Like A Pro With The Best Drill Brushes 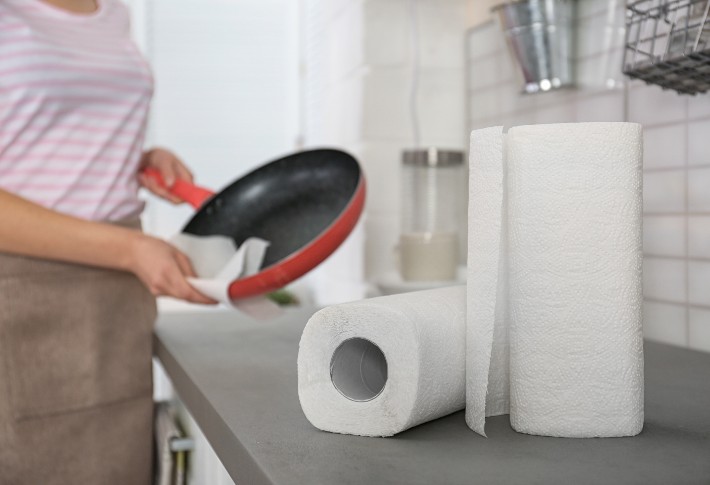 Clean Up The Accidental Spills Efficiently With The Best Paper Towels 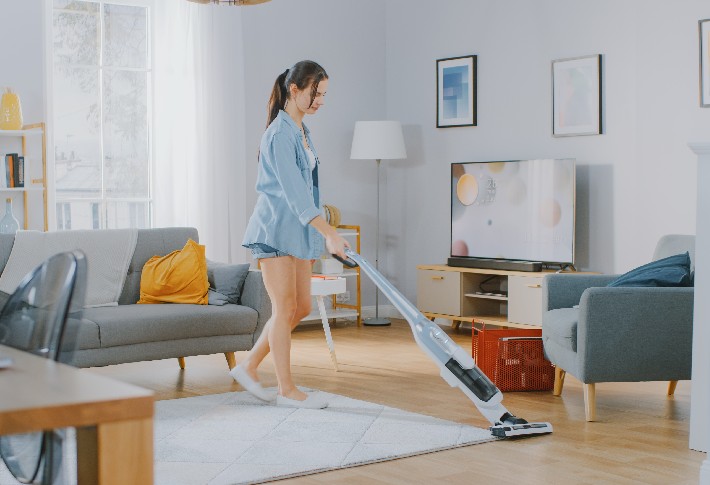 Best Cordless Vacuums for Making Your Home Neat and Clean